Vegetable peels, coffee grounds, corn cobs, dryer lint — they’re all waste for sure, but there’s treasure in that trash. You could compost them, that’s obvious, but let’s talk about some more clever ways to reuse those kitchen scraps before they make it to the bin. 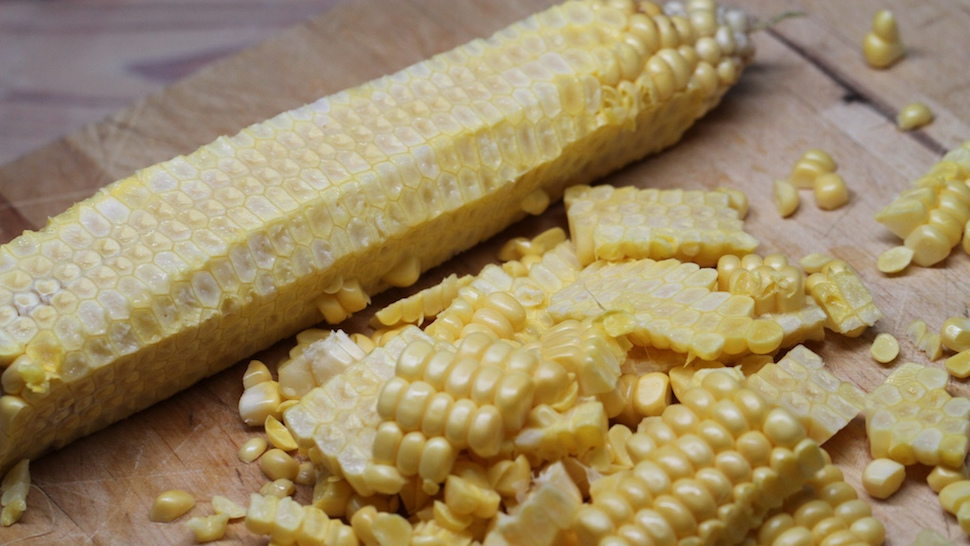 Fresh corn is one of life’s pleasures, but once you’ve eaten all you can and you’re left with the cobs — or if you extract the corn from the cobs and have cobs left over, don’t toss them into the trash. Leftover corn cobs can turn a pot of water into a deliciously savoury-sweet corn stock, or a pot of heavy cream into a rich corn cream that you can add to other recipes, or whip up nice and thick into a savoury-sweet whipped cream to top desserts.

Alternatively, you could always keep those corn cobs to roast chicken with. We’re not kidding — arrange your corn cobs on the bottom of a baking dish, pop your chicken to roast on top of the cobs, and, well, the rest is delicious, delicious magic in the making. Seriously, try it.

9. Use Dryer Lint to Kickstart a Grill or Light a Fire 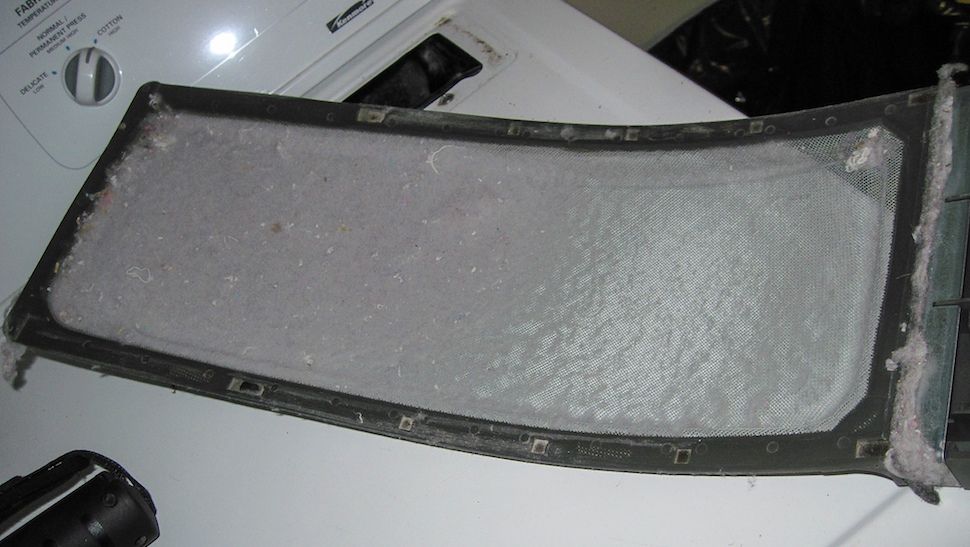 You should absolutely clean the dryer lint out after every use, but if you’re making your own survival kit, bug-out bag, or maybe you’re just planning a camping or outdoors trip in the near future, hang on to some of that lint. Dryer lint is incredibly flammable (which is why you want to get it out of your ducts and dryer as often as possible,) which makes it perfect as a fire starter. Grab an old egg carton and some candle stubs, and you have a waterproof fire starter that you can take with you anywhere.

Of course, if you’re not planning a trip in the near future, it’s still worth keeping some of that lint around. Dryer lint is exceptional at cleaning up oil — whether it’s cooking oil or oil in the garage. 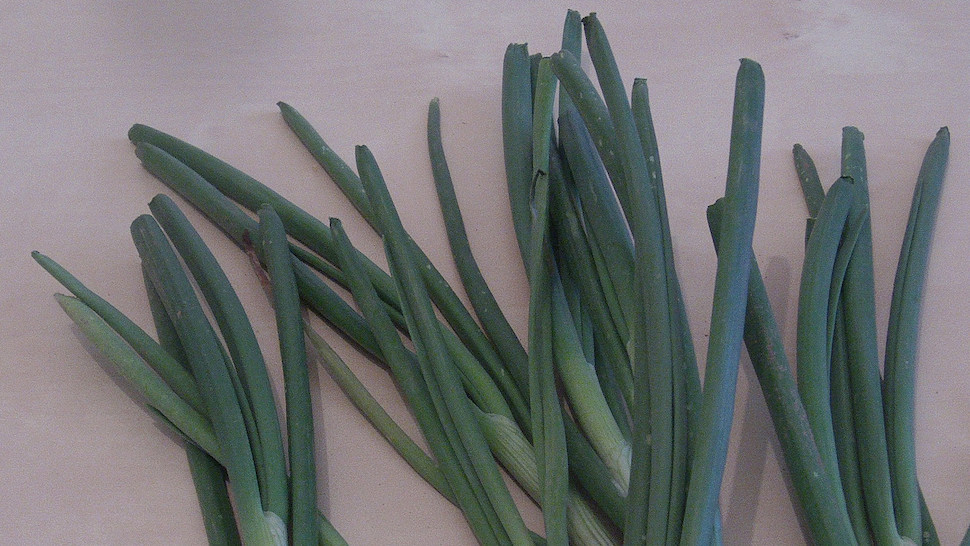 We’ve mentioned this before, but before you scrap those veggie tops, inedible leaves, or roots, you may be able to — with enough time and effort — grow completely new, free, near-infinite food. OK, that may be promising a bit much, but it’s absolutely possible to grow leafy greens like romaine and allums like spring onions from the tidbits you may otherwise trim off and throw away.

Some of those scraps require planting and growing in-season, of course, but if you don’t have a ton of space, or if you want to try your hand at growing food with nothing but a little water, well, you can do that too.

7. Use Banana Peels to Infuse Flavour into Hot Cocoa 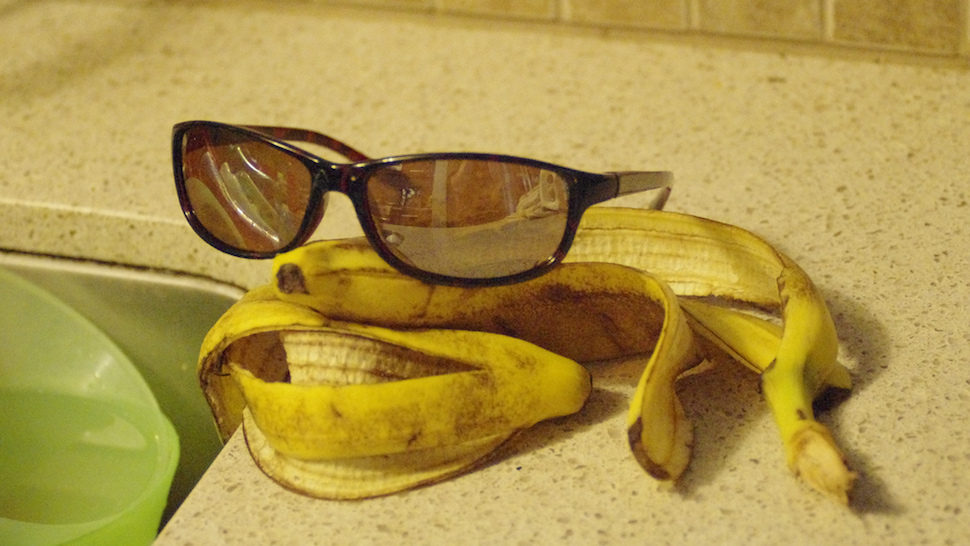 Bananas are great — they’re high in potassium, they’re delicious, and they’re just about everywhere (for now, anyway.) But did you know their peels are edible? Yes — people around the globe eat banana peels.

Even if that’s a bit too much for you to stomach, you can still make use of them in your next batch of hot cocoa. Simmering your cocoa with a banana peel adds that distinctly banana-y, nutty flavour to your cocoa, and well, what’s better than chocolate and banana?

That bottom part of the onion you trim off when you take the skin off, carrot tops and root bottoms, garlic that’s just starting to go off, all of those things aren’t garbage — but they don’t have to just be compost either. Toss them all into a pot with some herbs (or better yet, some herb stems or herbs that are a little limp), some salt and pepper and other spices you may have lying around already, cover it all with water, and simmer simmer simmer.

The picture gets even better if you have a pressure cooker. Instead of letting the whole thing simmer all day and reduce slowly, you can whip up a quick broth in minutes that you can use almost immediately, from scraps you have left over from cooking whatever else you were planning to make that night. It’s a win-win.

5. Keep Cheese Rinds for a Flavour Boost in Soup or Broth, or Make Cheese Crisps 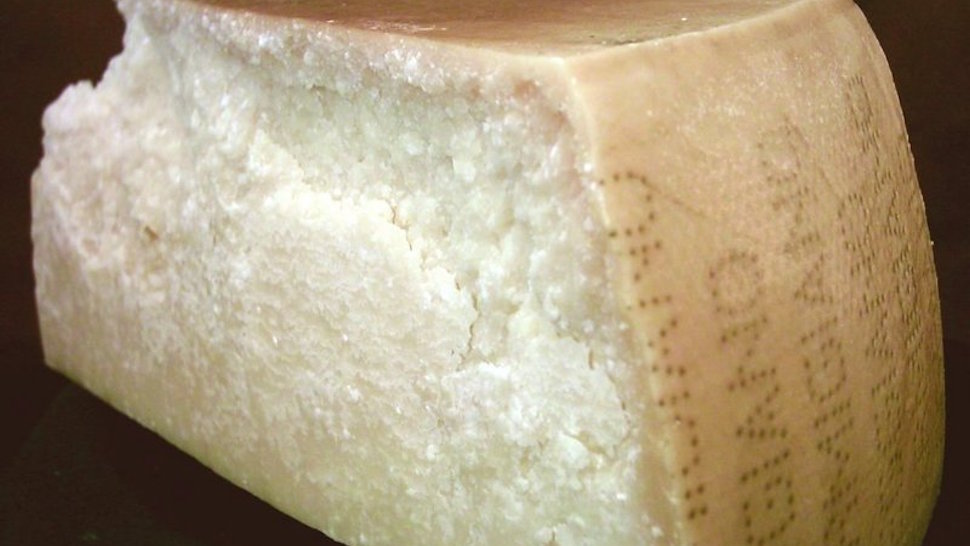 Big chunks of parmigiano-reggiano and other hard cheeses are amazing in the kitchen, for just about anything. But when you get down to the rinds — you know, the back ends of the cheese where there isn’t much more to salvage, don’t just throw them out. Those rinds offer a huge flavour boost if you toss them in with a soups or stews, and if there’s any rind left after it’s given up every last bit of that flavour to your dish, it will likely be smooth and spreadable and a perfect side to accompany it.

If soup isn’t in your future, you’re not out of options. You could just toss them into some water and make a savoury, velvety broth with those cheese rinds, and this works with any type of firm cheese, not just parmigiano-reggiano (think pecorino, romano, asagio, and more!) Finally, if you’re really really lazy, turn that trash into treasure with your science oven. About 30 seconds and you’ll have tasty cheese crisps to munch on one lazy afternoon.

4. Deodorise Your Dishwasher or Fridge With Citrus Peels 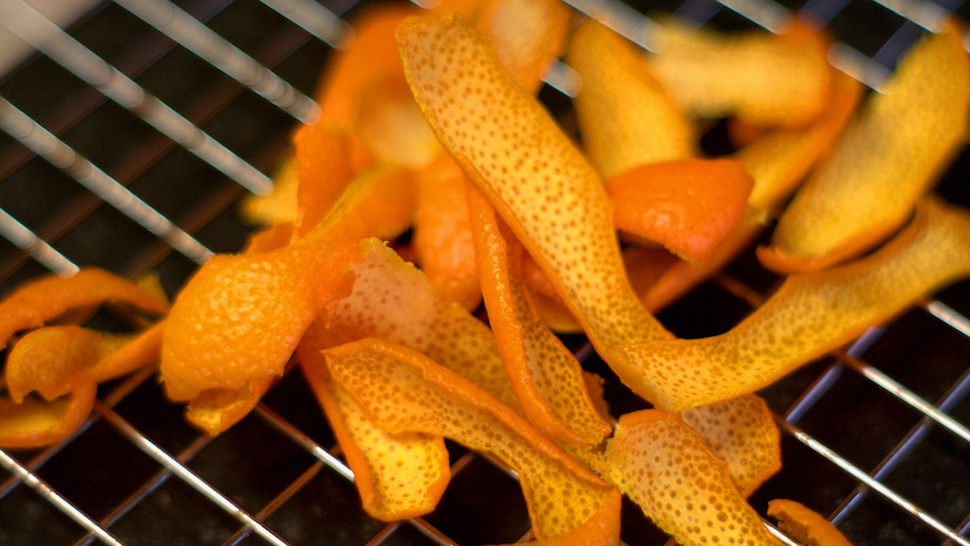 The next time you peel an orange, eat a grapefruit, squeeze the juice from a lemon or lime, or accumulate just about any other type of citrus peel, consider using them to deodorise your dishwasher. Sure, baking soda or vinegar can get the job done, but add a little citrus to the affair and you have something not just effective, but pleasant.

If your dishwasher is just fine, thank you very much, consider putting those peels to work in your fridge instead, or to protect your plants from your household feline friends. Worst case, collect them and rub some sugar into them for the best lemonade/limeaide/citrusaide you’ve ever tasted.

3. Use Herb Stems to Infuse Oil or Vinegar, or Grill them for an Aromatic Punch 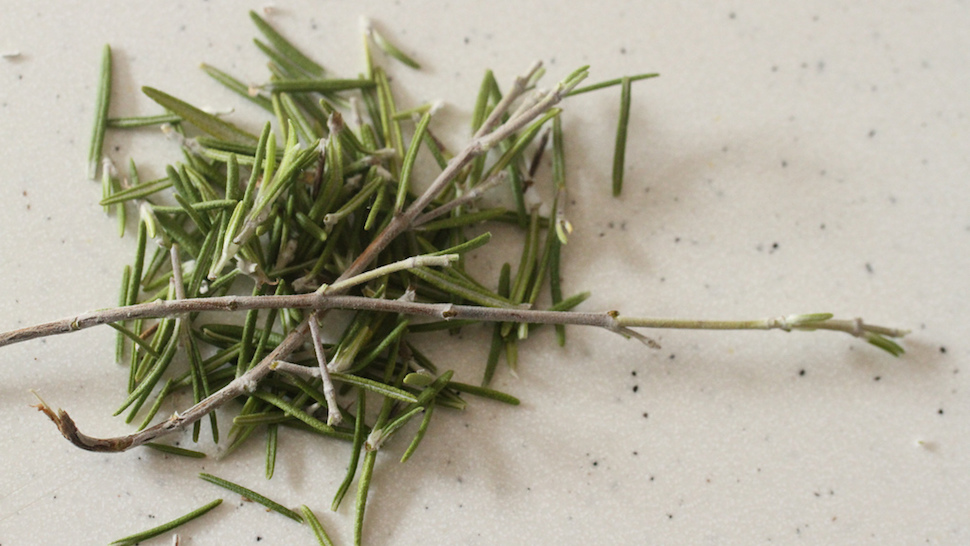 If you have those stems left over from herbs you just cut or bought at the grocery store, there’s no need to toss them out. Even if they’re the woodier variety like rosemary stems or thyme stems, they’re perfect to infuse oil, vinegar, or even stock with a punch of herbaceous flavour (just make sure you use them up quickly to minimise the risk of foodborne illness.)

If that’s not really up your alley, grab those stems the next time you hit the grill and toss them on with the rest of your food. You’ll get some good smoke, great aromatics, and a herbaceous bonus to whatever’s on the grill that day.

2. Turn Edible Peels and Scraps into Sauces, Spreads, and Snacks 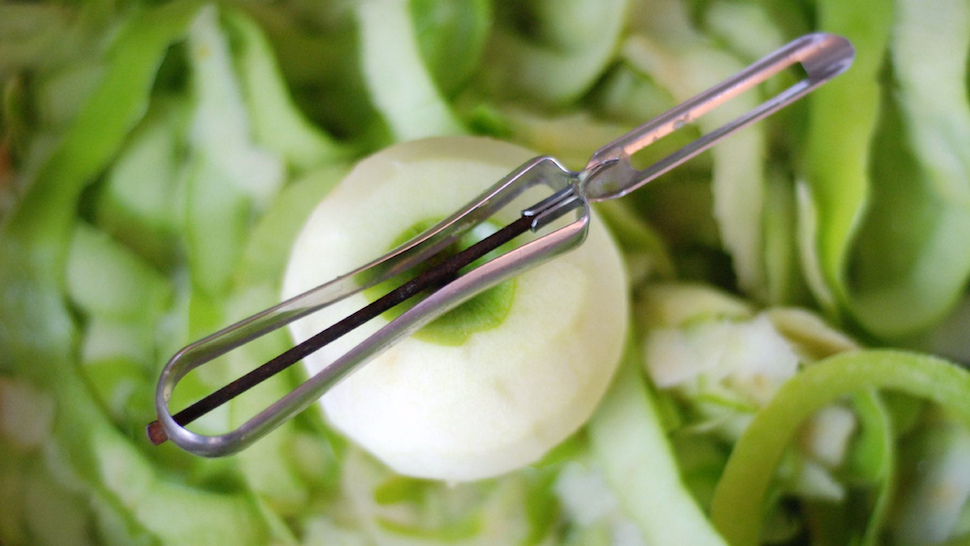 Many peels and scraps aren’t inedible or not-tasty, they’re just not useful. If you want to get the most from everything — including the apples you peel for pie without letting those peels go to waste, consider drying them out and seasoning them up to make apple crisps, or using those peels to flavour bourbon. You can do the same with other veggie peels, making a quick and crispy snack with potato peels, carrot peels, parsnip peels, and more.

Cucumbers, which usually don’t need to be peeled anyway, are often peeled for salads, some sandwiches, and of course, cocktails (where you don’t want the bitter peel.) Keep those peels and turn them into sandwich spread. Speaking of spreads, even the tops of strawberries — you know, the green leafy bits — make a great pesto.

1. Use Coffee Grounds as a Household Cleaner 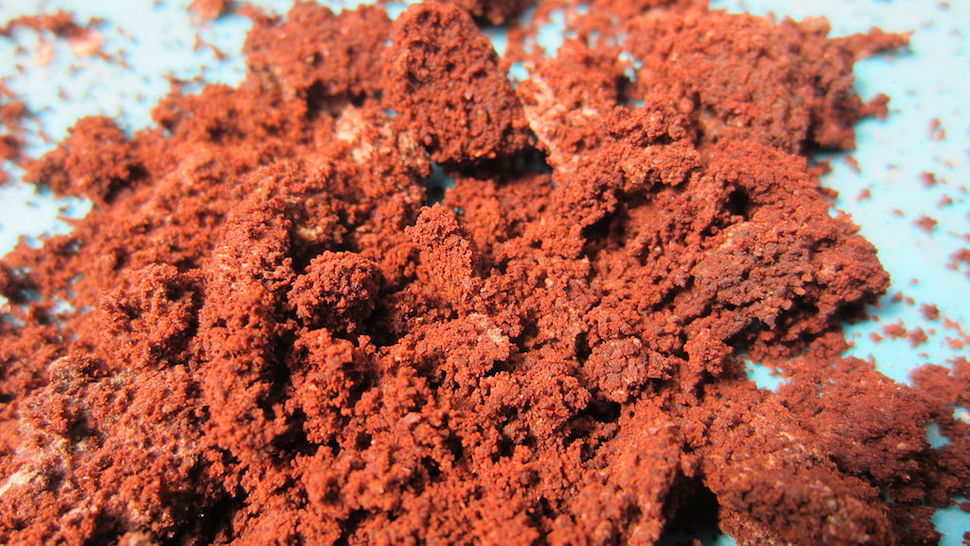 It wouldn’t be Lifehacker if we didn’t have tons of great ways to make use of coffee grounds. I mean, for as much coffee as we all drink, we’d better have something, right? Good thing you can make cleaning the fireplace easy.

Of course, since they’re abrasive, they’re perfect for cleaning up sticky tools and other items that have adhesive or other goop on them, and if none of this really applies to you, you can always turn them into starter pots for spring planting and give your green friends a boost. It’s the next best thing to the compost pile.

Lifehacker’s Weekend Roundup gathers our best guides, explainers, and other posts on a certain subject so you can tackle big projects with ease. For more, check out our Weekend Roundup and Top 10 tags.