15 Books That Bill Gates Thinks Everyone Should Read

booksinfographicsreading
At Lifehacker, we independently select and write about stuff we love and think you'll like too. We have affiliate and advertising partnerships, which means we may collect a share of sales or other compensation from the links on this page. BTW - prices are accurate and items in stock at the time of posting.

If you ever want to feel bad about that growing shame pile of unread books by your bedside, just remember that world-renowned billionaire Bill Gates has previously said that he reads roughly one book a week.

Our friends over at Business Insider have done the monumental task of sifting through years of Bill Gates’ recommended books to find the top 15 that made especially strong impressions on him. Now, we’re passing the knowledge onto you.

This list pulls some of Bill Gates’ favourite books, along with quotes explaining why he found them so remarkable. We’ve also included links so you can snap them up yourself because, despite your towering unread pile, there’s no such thing as too many books. Happy reading!

“The Sixth Extinction” by Elizabeth Kolbert
“Over the last half a billion years, there have been five mass extinctions of life on earth. Scientists around the world are currently monitoring the sixth, predicted to be the most devastating extinction event since the asteroid impact that wiped out the dinosaurs”. 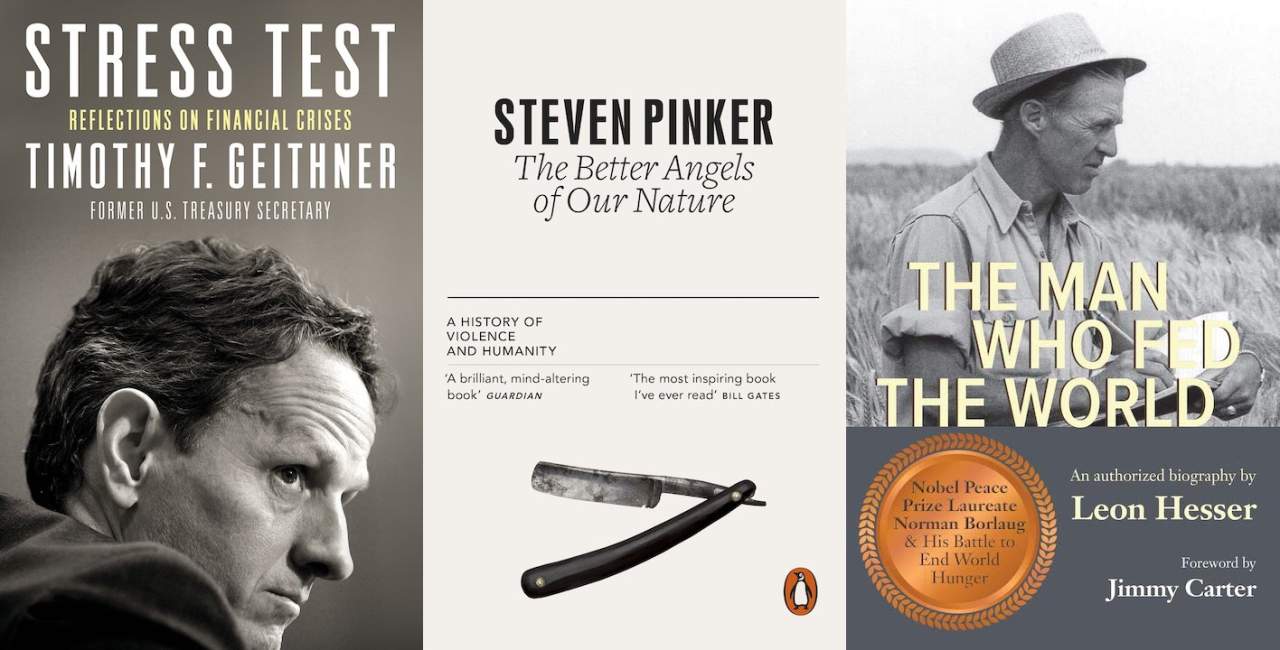 “Stress Test” by Timothy Geithner
“From the former Treasury Secretary, the definitive account of the unprecedented effort to save the U.S. economy from collapse in the wake of the worst global financial crisis since the Great Depression”.

“The Better Angels of Our Nature” by Steven Pinker
“Wasn’t the twentieth century the most violent in history? In his extraordinary, epic book Steven Pinker shows us that this is wrong, telling the story of humanity in a completely new and unfamiliar way. From why cities make us safer to how books bring about peace, Pinker weaves together history, philosophy and science to examine why we are less likely to die at another’s hand than ever before, how it happened and what it tells us about our very natures”.

“The Man Who Fed the World” by Leon Hesser
“Dr. Norman Borlaug, one of the world’s greatest heroes, is the most highly-decorated individual of our time. He is credited with saving over a billion people from Starvation. Dr. Borlaug is only one of five people in history to win the Nobel Peace Prize, the Presidential Medal of Freedom and the Congressional Gold Medal. In addition, Dr Borlaug received the Padma Vibhushan, the highest civilian award the government of India can present to a non-citizen. Winner USA Book News Best Biography of the Year. Winner American Farm Bureau Foundation of Agriculture Best Book of the Year award. Winner Florida Publishers Association Best Book Award. Winner Florida Writers Association Royal Palm Literary Award”. 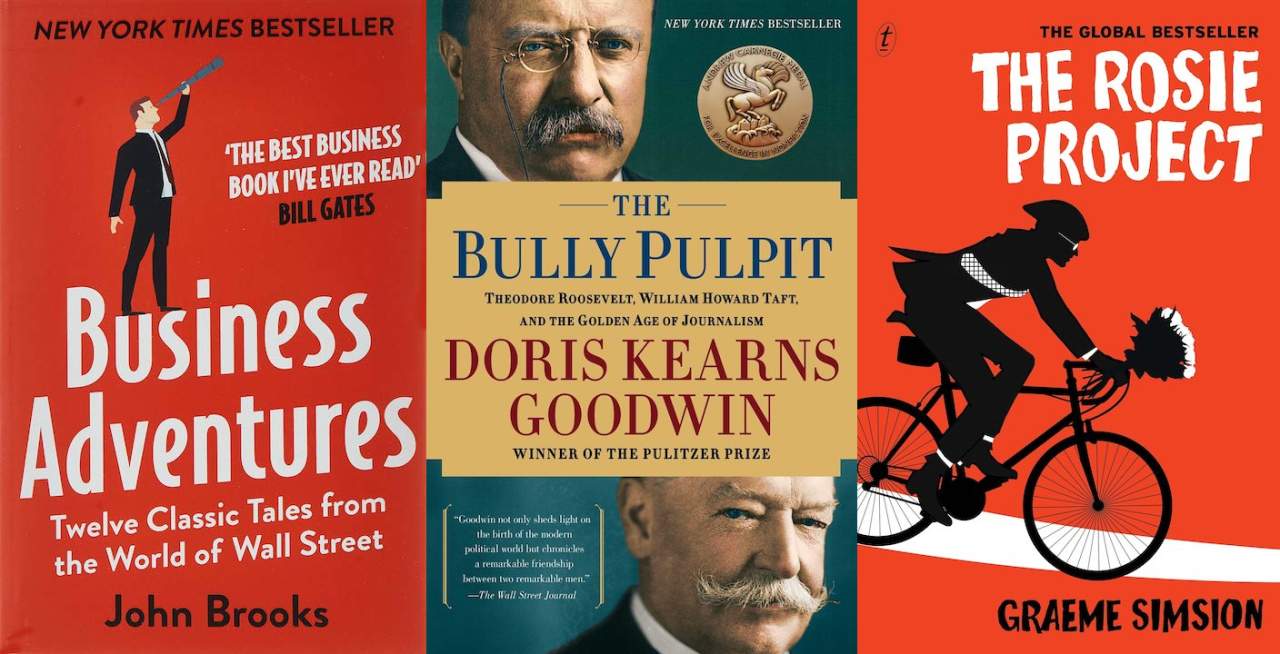 “Business Adventures” by John Brooks
“What do the $350 million Ford Motor Company disaster known as the Edsel, the fast and incredible rise of Xerox, and the unbelievable scandals at General Electric and Texas Gulf Sulphur have in common? Each is an example of how an iconic company was defined by a particular moment of fame or notoriety. These notable and fascinating accounts are as relevant today to understanding the intricacies of corporate life as they were when the events happened”.

“The Bully Pulpit” by Doris Kearns Goodwin
“Doris Kearns Goodwin, author of the acclaimed multi-million copy bestseller Team of Rivals, filmed by Spielberg as Lincoln, turns to the birth of America’s Progressive Era – that heady, optimistic time when the 20th Century is fresh. Reform is in the air, and it is time to take on the robber barons and corrupt politicians who have brought the country to its knees”.

“The Rosie Project” by Graeme Simsion
“Don Tillman is getting married. He just doesn’t know who to yet. But he has designed the Wife Project, using a sixteen-page questionnaire to help him find the perfect partner. She will most definitely not be a barmaid, a smoker, a drinker, or a late-arriver”. 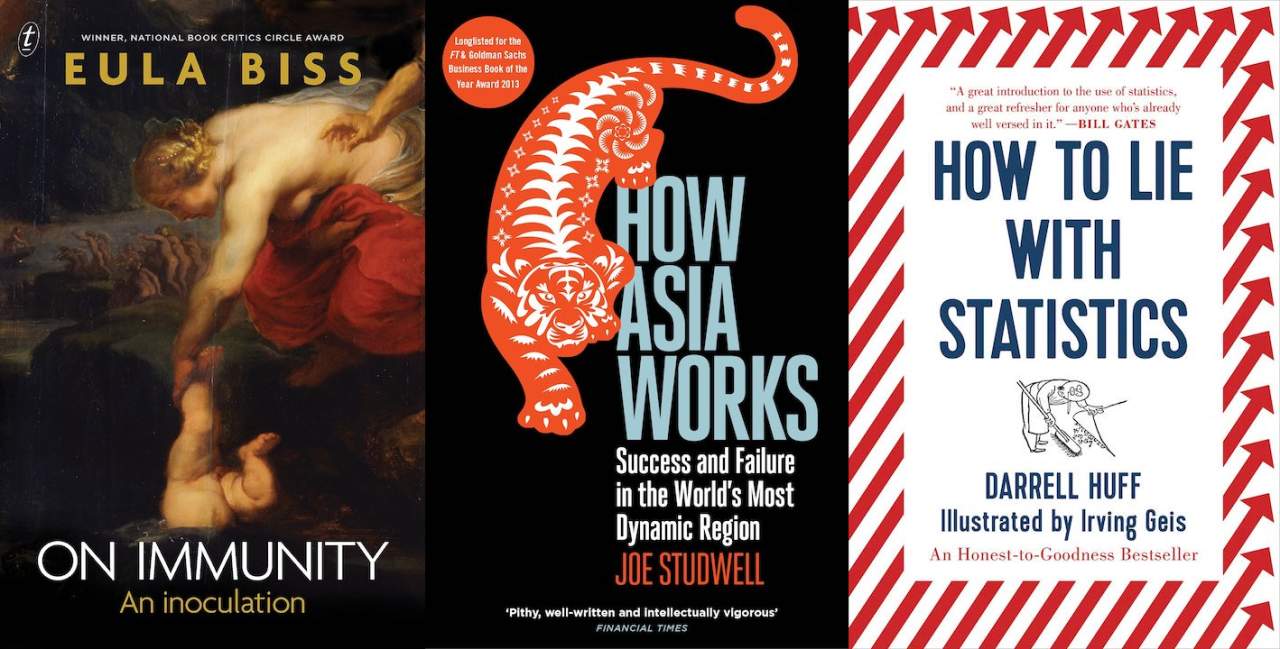 “On Immunity” by Eula Biss
“In this bold, fascinating book, Biss investigates the metaphors and myths surrounding our conception of immunity, and its implications for the individual and the social body. Weaving her personal experiences with an exploration of classical and contemporary literature, Biss considers what vaccines, and the debate around them, mean for her own child, her immediate community and the wider world”.

“How Asia Works” by Joe Studwell
“Until the catastrophic economic crisis of the late 1990s, East Asia was perceived as a monolithic success story. But heady economic growth rates masked the most divided continent in the world – one half the most extraordinary developmental success story ever seen, the other half a paper tiger.”

“How to Lie With Statistics” by Darrell Huff
“Darrell Huff runs the gamut of every popularly used type of statistic, probes such things as the sample study, the tabulation method, the interview technique, or the way the results are derived from the figures, and points up the countless number of dodges which are used to full rather than to inform”. 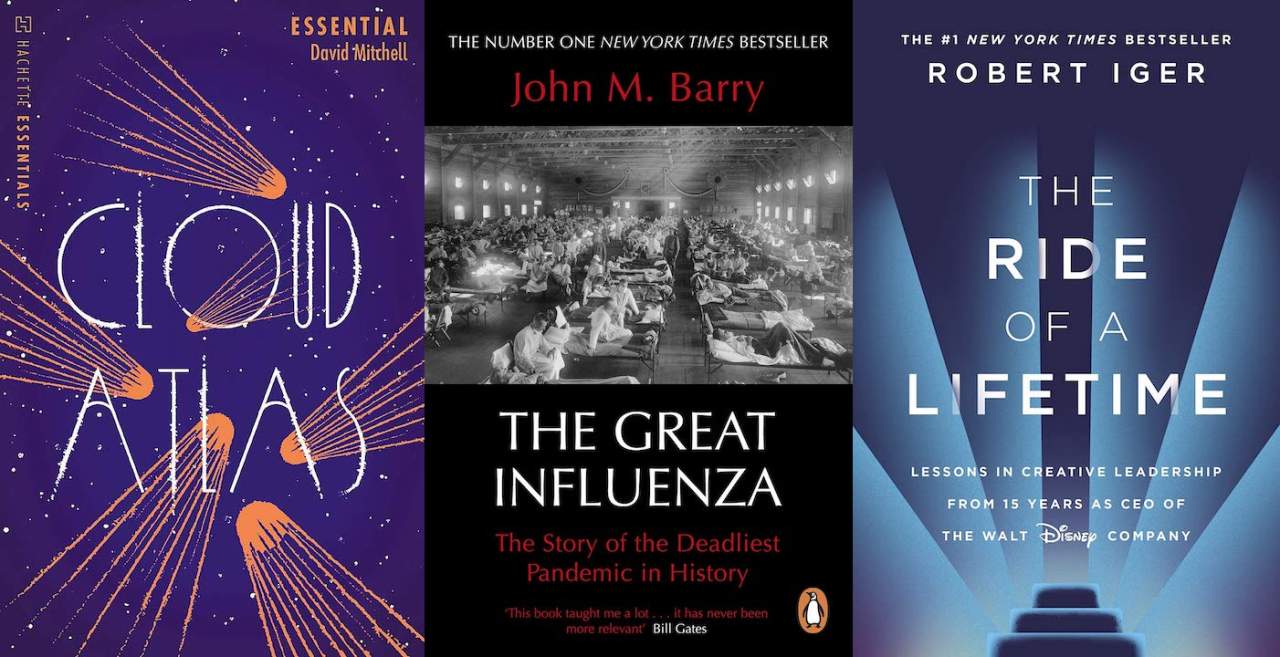 “Cloud Atlas” by David Mitchell
“This is the kind of novel you’ll think and talk about for a long time after you finish it. The plot is a bit hard to explain because it involves six inter-related stories that take place centuries apart (including one I particularly loved about a young American doctor on a sailing ship in the South Pacific in the mid-1800s). But if you’re in the mood for a really compelling tale about the best and worst of humanity, I think you’ll find yourself as engrossed in it as I was”.

“The Great Influenza” by John M. Barry
“We’re living through an unprecedented time right now. But if you’re looking for a historical comparison, the 1918 influenza pandemic is as close as you’re going to get. Barry will teach you almost everything you need to know about one of the deadliest outbreaks in human history. Even though 1918 was a very different time from today, “The Great Influenza” is a good reminder that we’re still dealing with many of the same challenges.

“The Ride of a Lifetime” by Bob Iger
“This is one of the best business books I’ve read in several years. Iger does a terrific job explaining what it’s really like to be the CEO of a large company. Whether you’re looking for business insights or just an entertaining read, I think anyone would enjoy his stories about overseeing Disney during one of the most transformative times in its history”.