This week, IDC released its latest figures for Australian smartphone shipments. For the first time in a while, iOS is leading the mobile OS pack, with a total shipment volume of 1.75 million units in Q4 2017. Android isn’t too far behind, with close to 1.4 million. So where does that leave Windows Phone?

Sadly, Microsoft-fueled handsets managed to sell just 45 units in Q4 2017. That’s forty-five phones over three months, Australia wide. This works out to a market share of 0.00 per cent. Ouch.

We’ve long warned that buying a Windows Phone was a highly risky proposition. Even at its peak, the mobile OS had a market share of barely ten per cent. Those figures must now resemble halcyon days for Microsoft’s few remaining phone execs (who we imagine are brushing up their CVs right about now.) 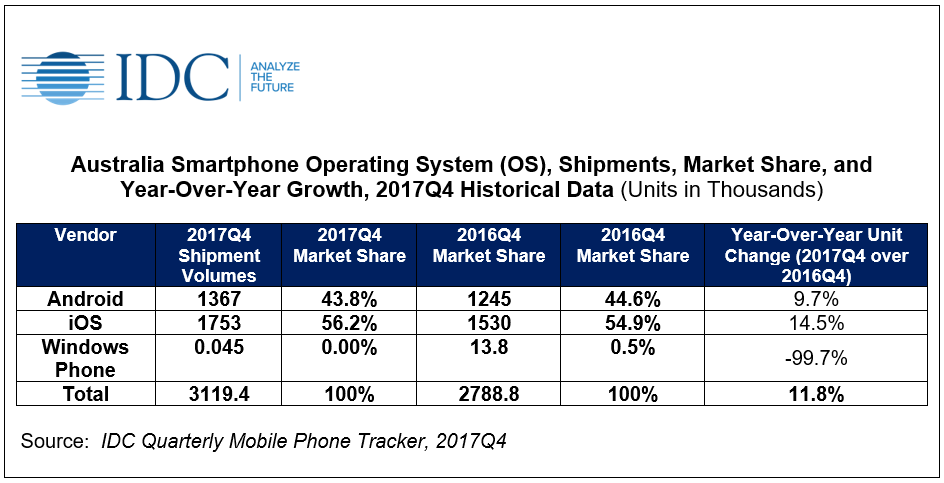 So what happened? In short, colossal mismanagement happened.

When it comes to Window Phone’s downfall, Microsoft only has itself to blame – from purchasing and shuttering Nokia to the tune of $7.6 billion (what were they thinking?) to confusing shifts in design language codenames. (Anyone remember Steve Ballmer’s presentation at CES 2011 when he kept chanting “Metro! Metro! Metro!”? MS developers and employees were forbidden from publicly using the word soon thereafter.)

It’s only a matter of time before Windows Phone ceases to exist. With Microsoft ending support for mobile push notifications, the company has affectively turned its back on its dwindling user base. Which is a crying shame.

While Windows Phone was never our mobile OS of choice, we’re still kind of sad to see it go. The operating system had a user-friendly front end with a refreshingly different menu layout. While third-party support could have been better, it still contained most of the apps that an average user needed.

Plus, it was just nice to have an extra option to choose from, especially after Blackberry threw in the towel. Now you have a choice between Android, iPhone or no phone.

For Microsoft fans, all hope now lies in the Phoenix-like Surface Phone – a product that may or may not exist. Failing that, it’s unlikely that we will see another Microsoft smartphone for many years to come.

Goodbye Windows Phone - It's A Shame You're Leaving

Back in the 1990s, one company pretty much dominated mobile computing. That company was Palm. But, by the end of the last millennium, Microsoft decided that mobile computing was a big deal and they sunk a bunch of effort in developing Windows CE, then Pocket PC and eventually, Windows Mobile. Palm disappeared and Microsoft ruled the roost for a while. But then Apple released the iPhone, Google released Android and Microsoft found themselves dumped from leadership to being an also-ran in very short time. And after trying to reassert themselves, Microsoft has finally given up on Windows Phone. Which is a shame.