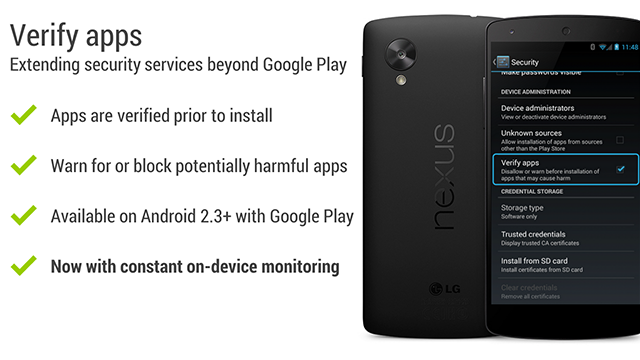 Android: Google announced that it is expanding its Verify Apps system to continually scan all apps installed on a phone to determine if they’re malicious or harmful.

Previously, the Verify Apps system would only kick in if you installed an app from outside the Play Store, and it would only scan an app during installation. However, not only can apps change their behaviour once they have permission to run, as we’ve learned recently, you can find crap software on the Play Store too.

The new system is rolling out via Play Services, so any device running Android 2.3 or higher should benefit. If an app is scanned and found to be potentially harmful, you’ll receive a warning to either block installation or remove it from your system. You can also check out our guide on how secure Android really is for more information on how to protect yourself.