The Difference Between Washing Soda and Baking Soda

In addition to the usual pet videos and pop culture memes, cleaning tips and demonstrations have become a constant presence in our social media feeds. Dramatic before-and-after photos of objects, once tarnished beyond recognition, now shiny and new, thanks to a specific technique or product the poster swears by.

While scrolling through these new cleaning methods — many of which have actually been around for a long time — you may have encountered someone using washing soda, and had a few questions. Well, at least one: What’s the difference between washing soda and baking soda? Get ready, because you’re about to find out.

What’s the difference between washing soda and baking soda?

Before getting into their differences, here are a few things washing soda and baking soda have in common:

And now, the differences between washing soda and baking soda:

How to making washing soda out of baking soda

Washing soda isn’t as widely available in stores as baking soda, and if that’s the case where you live (and you don’t want to or aren’t able to buy it online), you can make your own using baking soda. Here’s how:

The tricky part is having to pay attention to when the change in composition happens. According to the Nature’s Nurture blog, baking soda is “powdery, crystallised, and clumps together,” while washing soda is “more grainy, dull, and it doesn’t clump as easily.” The blog provides a photo to illustrate the difference, with baking soda on the left, and washing soda on the right: 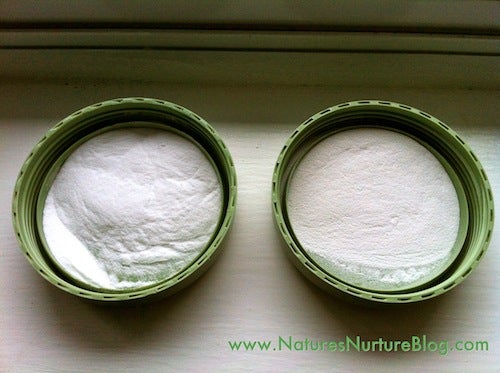 Don’t forget that this form of washing soda is also caustic, so once it has made its transformation, be sure to wear gloves when handling it.