Does It Matter Which Way You Face the Plates on a Barbell?

Most people new to the gym don’t give much thought to which direction the plates face on a barbell. But serious lifters have very strong opinions about it, and in time, you too will need to choose a side. But why does anyone care? Let’s examine the controversy.

It’s important to understand that this is not a critical issue when it comes to safety or to getting a good workout. If you face the wrong direction in the squat rack, you could get hurt someday. If you face the plates the wrong direction on the bar, the worst that happens is you get lectured by somebody who has an overblown sense of the importance of tradition. This is, in truth, a bit like the endless debate about whether the toilet paper should go over the top of the roll or hang down from the back.

Wait, what does “the direction the plates face” even mean? 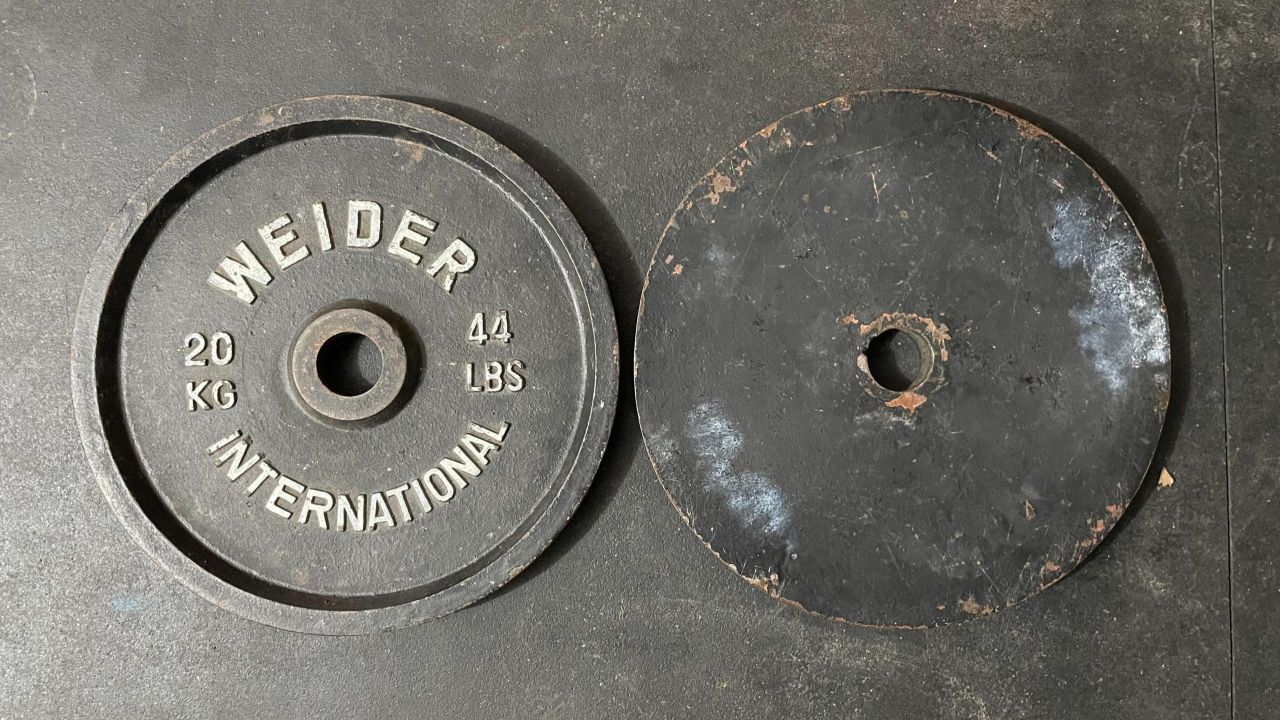 OK, now we’re asking the real questions. Some plates are the same on both sides, in which case the issue doesn’t exist. (Mostly. Arguably. We’ll get to an exception in a minute.)

Nor do you have to worry about this question if your gym uses bumper plates (the bouncy ones); they’re pretty much the same on both sides. Or if your gym uses plastic-coated plates with cutout grips, which also do not have a distinguishable front and back.

But there are plenty of plates that do have a front and a back. The back is plain and smooth, with no lettering and no indentations. The front has a lip around the edge, and the surface of the plate is recessed. Inside that recessed area there is typically a label showing how much the plate weighs, as well as branding to show who made the plate. This is what we’ll call the front.

So you load them so you can read the writing…right?

Ha! If only it were that simple. Facing the plates outward makes them easier to read. This is perfectly acceptable and logical to me, personally. But there are tons of gyms where the tradition is to face the plates inward.

These tend to include powerlifting gyms, and gyms with an old-school feel. If there are iron plates around, it’s likely you’re in one of these places anyway — but that isn’t always the case. If you want to be sure to blend in, take a look around the gym before you start loading your bar. If there seems to be a difference of opinion, do whatever the biggest or most experienced-looking person does.

If you ask people why they load the plates backward, the reason is usually “this is just how we do it.” One argument holds that you can grab the lip of the plate more easily when it’s on the rack facing out, and on the bar facing in. This makes sense when you’re loading a squat or a bench press, but deadlifts are easier to load when the lip faces out: just slip the plates onto the bar the same way you would slip them onto the rack.

If you need a simpler explanation, there is always the superstition that loading the plates face-in keeps the power inside the bar.

Ready for a further difference of opinion? Even if you agree that all of the 20 kg plates (the big ones) be loaded face-in, then you have to decide which direction to face the smaller plates: the 25s, 10s, and so on. My husband learned the plates-in method at a powerlifting gym, and in our home gym I’ll sometimes find him squatting a barbell with a few full-size plates on it, plus an assortment of mystery plates. Is that medium-sized one a 25 or a 35? Is he using the 5 kg plates or did he steal my 5-kilogram ones? I think facing the smaller plates out would be a nice touch, but I’m not going to disrespect the tradition of his people.

And then there is the matter of competition loading.

OK, how do they load the bar in competitions?

Consider the International Powerlifting Federation, which uses thin, colour-coded steel plates that have a lip and writing on one side. (Powerlifting is the sport of the squat, bench press, and deadlift.) The rulebook states:

7. All discs must be clearly marked with their weight and loaded in the sequence of heavier discs innermost with the smaller discs in descending weight arranged so that the referees can read the weight on each disc.

This method maximizes the number of plates whose markings can be read from a distance. Judges, loaders, and spectators all appreciate that. The largest plates (25 kilograms) are large and red; the other plates are different colours, and tend to be smaller in diameter. If you have a few reds and multiple smaller plates, it’s easy to tell from the size, colour, and markings exactly how much is on the bar. 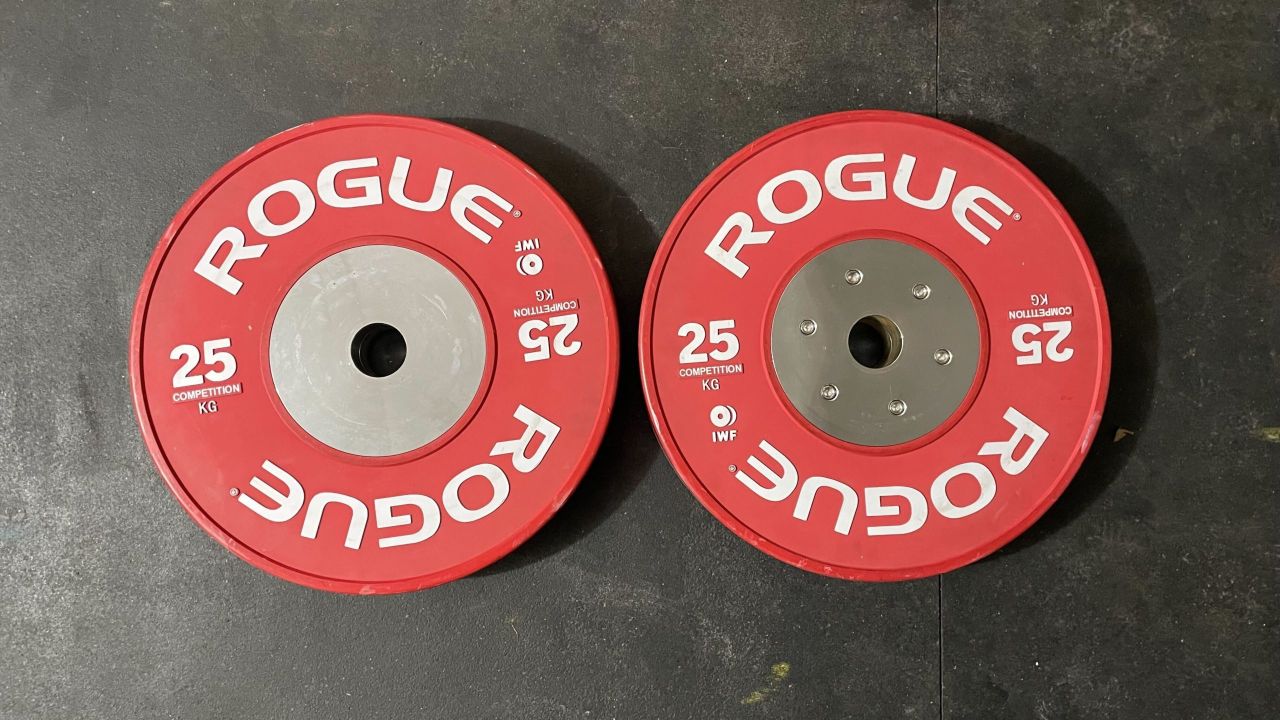 Weightlifting (the sport of the snatch and the clean and jerk) used to be like this, back when they used one-sided plates. But these days, the standard equipment is a set of bumper plates that are all the same size, with markings on both sides. Colour-coding effectively communicates the weight of any plates whose markings cannot be seen. The International Weightlifting Federation thus does not specify which direction the plates must face:

The bar is loaded with the heaviest discs first and then the lighter discs loaded in descending order of weight toward the outer edge of the bar. Discs must be loaded so that both the on-duty Referees and Jury can identify the weight of each disc.

So bumper plates don’t have a front and a back?

Mostly. Modern bumper plates have markings on both sides, but sometimes you can tell the front from the back by their construction. If there is a metal disc in the centre, one side of the plate may have visible hardware, while the other side does not. Some meet organisers instruct their loaders to hide the hardware so that only the smooth, shiny side is visible (using the mnemonic “hide your nuts”). Others do not care. (Redditor Afferbeck_ posted a collection of photos showing the inconsistency over the years.)

Can you give me a rule of thumb or something?

If you had no idea about this controversy before, I hope I’ve educated you. And if you had a strong opinion, I hope I’ve opened your eyes to others’ viewpoints and confused you slightly. (Sorry.) Feel free to share any reasons or superstitions I’ve missed in the comments.