As we’ve discussed before, there are three ways to hold onto a barbell if you’re worried your grip is going to slip. You can use straps, you can face your palms in different directions (mixed grip), or you can hook grip it. A hook grip is more secure than mixed, but one thing scares many people away: the pain.

I am happy to report that, after nearly two years of olympic weightlifting (where hook grip is neither feared nor debated, but simply a part of life), I now believe that hook grip is not nearly as painful as it is reputed to be. And yes, I am the person who wrote in that earlier article that hook grip “hurts like hell.” This is partly because I’ve gotten used to it, but it’s also partly because I used to do it wrong.

If you have small hands, or if you’re using a thicker bar, hook grip may be more uncomfortable — or perhaps even impossible.

The barbells in a normal gym may vary. Power bars are usually similar to a men’s Olympic bar, at 28 or 29mm. Squat bars, which you’ll usually only find in powerlifting gyms, are heavier than a typical power bar, and thicker. The thickness makes them more comfortable on the back, but it’s mainly because these bars need to hold heavy plates while being stiff enough not to bounce much. They’re often 32mm.

Deadlift bars, on the other hand, are thinner (but not quite as thin as a women’s Olympic bar) at 27mm. Deadlifts and Olympic lifts are the most common lifts where people use hook grip, so only those bars are designed with this in mind. (Some powerlifting federations use a power bar for deadlifts; others use a deadlift bar. Powerlifting does not use different bars for men and for women.)

All of this is to say: If you have trouble with hook grip, make sure you’re using the thinnest appropriate bar. I can’t hook grip on a squat bar, and I don’t even find power bars very comfortable, but I have no problem hook gripping on a women’s Olympic bar or a deadlift bar.

Lay your thumb so it is parallel to the bar

A common mistake — and a thing that makes hook grip hurt a lot more than it needs to — is placing your thumb on the bar incorrectly. 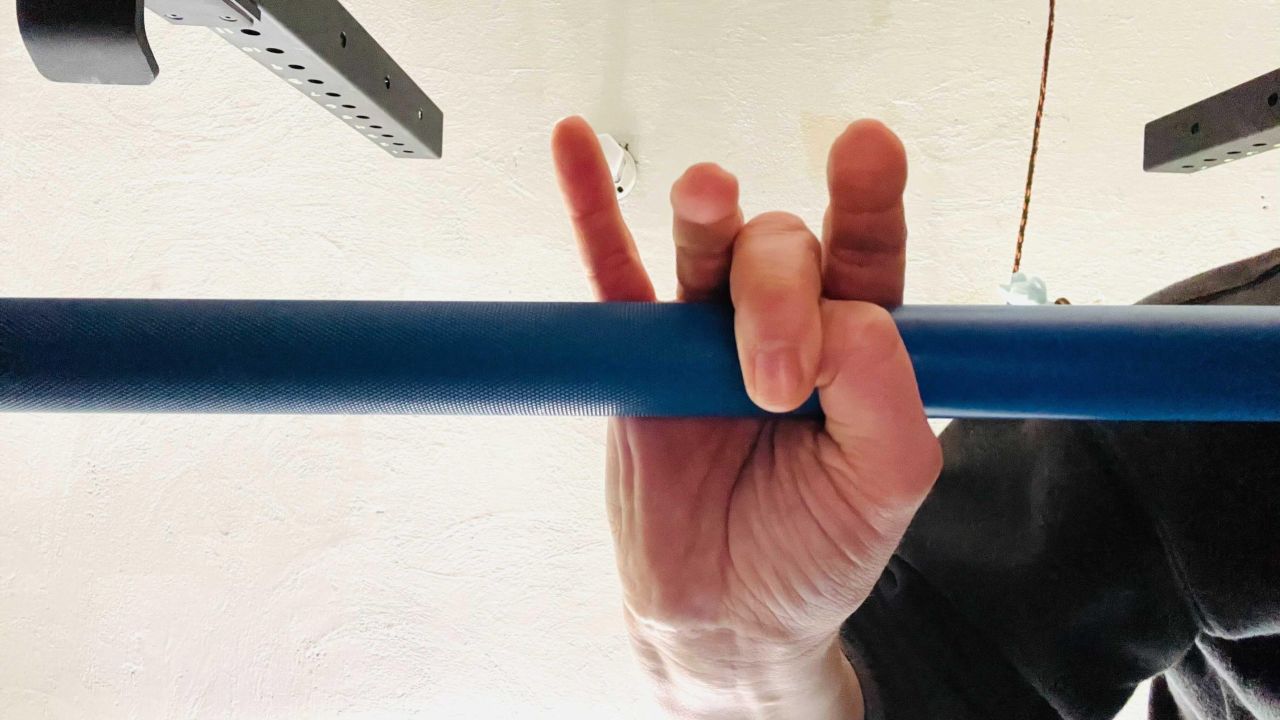 Here’s where I place my thumb in the hook grip. After setting my thumb in place under my middle finger, I’ll wrap the rest of my fingers comfortably around the bar. (Photo: Beth Skwarecki)

Don’t think of your thumb as wrapping underneath the bar; it’s not like a pincer opposing your fingers.

The exact point of contact will depend on your body proportions, but the thing I’m trying to stress is that you should not try to jam your thumb under as many fingers as possible, nor should you try to wrap it deeply around the bar. If you get a pain in the knuckle where your thumb meets your palm, this is likely what you’re doing wrong.

Even if you do everything right, your first deadlift with hook grip might be painful, or at least uncomfortable. But if you’re using an appropriate bar and gripping it correctly, the discomfort will be short lived.

If any pain, bruises, or calluses develop, they should be mild and occur in a roughly parallel to the length of your thumb, and on the side of your thumb rather than in the middle of the thumb pad or on the knuckle.

Thumb tape can help a bit; wrap athletic tape around your thumb, skipping the thumb joint, or use an elastic thumb tape around the whole thumb. This provides a bit of compression so the pressure doesn’t hurt as much, and it can also be more comfortable so the knurling on the barbell doesn’t dig into your thumbs as much.

As you’re getting used to hook grip, use it on as many lifts as you can — but it’s ok if you don’t use it on every lift. For example, you might warm up for deadlifts by using hook grip on the lighter sets, and then use mixed grip or straps for most of your working sets. When it’s time to pull a heavy single, you might want to use hook grip for just that rep. Over time, you’ll be able to handle more. That said, even experienced lifters will often use straps for high-rep sets.