The Easiest Way To Switch From Microsoft Windows To Linux 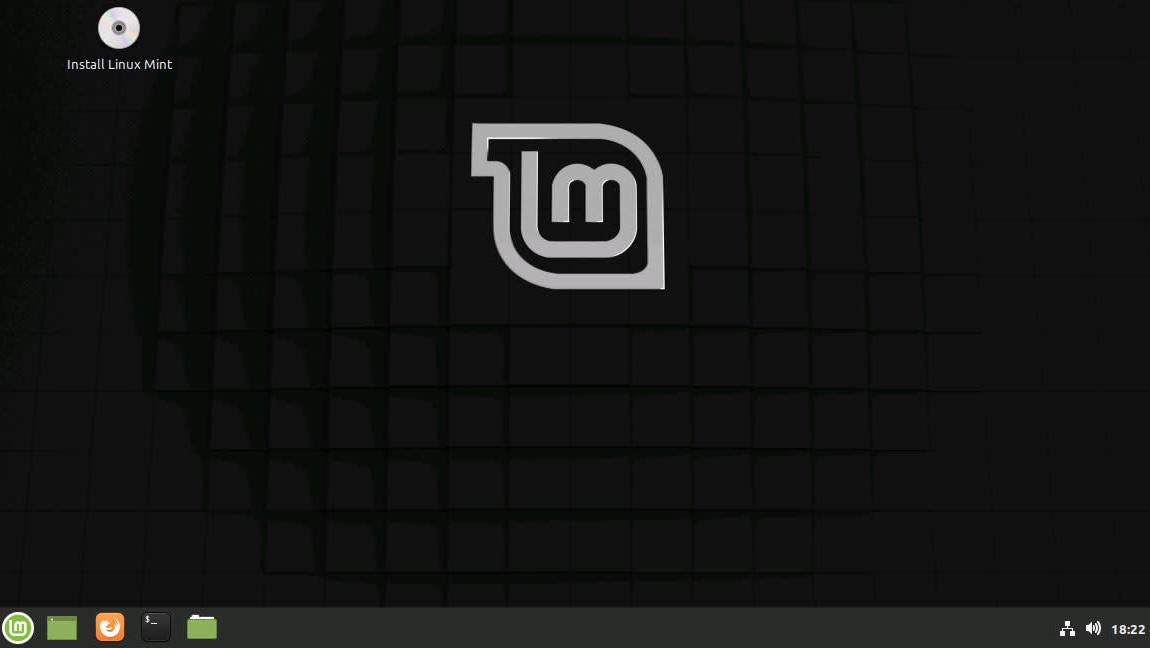 Microsoft has finally shut the door on free security updates for Windows 7. While you have plenty of options for upgrading the antiquated operating system, and even a hack that might be able to extend your updates for years, one of the best things you can do if you don’t want to make the jump to Windows 10 is to take a 90-degree turn toward Linux.

Yes, Linux. Don’t be scared. While your first thought is probably, “that’s too complicated for me,” hear me out. There are a number of Linux distributions that look and feel like the Windows you’re already familiar with. You won’t find yourself sitting in front of a command prompt, wondering what to do next, unless that’s the kind of experience you want. Otherwise, Linux isn’t terrifying in the slightest.

If you’re sticking with Windows 7 because of a specific reason—apps that only work on that version of the OS and nothing else—we even have a workaround for that, too: virtualizing Windows 7 so you can still access it in a safe, as-you-need-it fashion (assuming your system can handle it).

Stick with us, and we’ll show you just how easy it is to switch to Linux and all the great apps that couldn’t be any easier to download and install in the OS. (We do love package managers.)

Before we begin: Get yourself ready to leave Windows 7

For the sake of keeping this article under a million words, I’m going to assume that you’ve already saved your critical data and everything else you need from your existing Windows 7 installation. (You should be backing up your system all the time anyway, so this shouldn’t be a surprise).

If you’re nervous about switching over, you can start by creating a live CD (or live USB) of the Linux distribution we’ll be using, Linux Mint. In fact, you’ll have to do this anyway to install it, so might as well get it out of the way now. By booting to a Live CD when your computer starts instead of Windows 7, you’ll be able to explore what it’s like to use Linux Mint as if you had actually installed it on your system. Nothing you do in the OS persists between reboots—it’s all temporary—but this at least gives you the ability to try out this Linux distribution and see if you like it before you fully commit.

For most people, I recommend creating a list of all the Windows apps you’ve installed and saving that to a cloud-storage account somewhere, along with any other critical data that fits (your documents, for example). Upload your photos to a cloud-storage service as well—either Google Photos, if that’s sufficient, or an online storage server if you need to preserve your shots in their original quality. Take all the time you need to do this part, because you only get one shot at it (unless you’ve taken the secondary step of using a service like Backblaze to automatically save all your stuff or have cloned your entire drive elsewhere).

Finally, write down your Windows 7 product key. If you have no idea where or what that is, use the ProduKey utility to find it.

Double-click the (blatantly obvious) “Install Linux Mint” icon on your desktop, which should pop up this first screen: 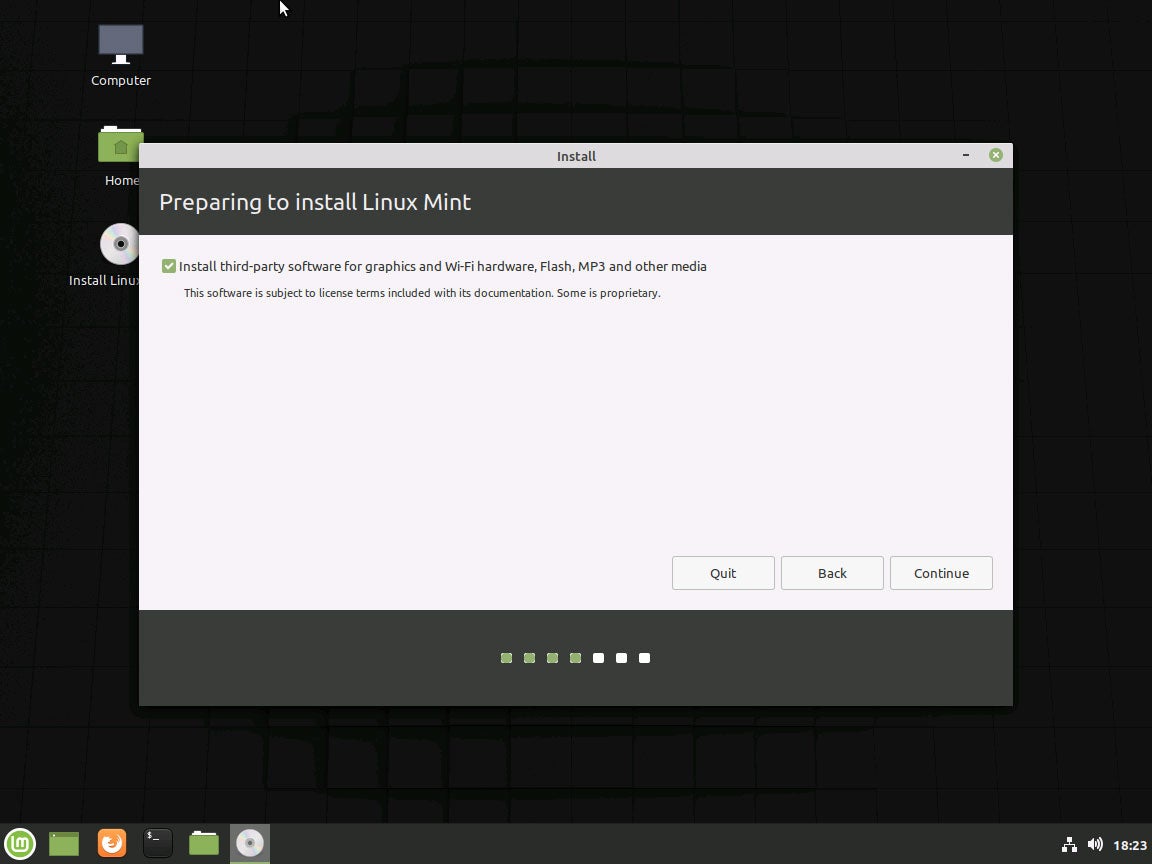 Continue forward. Eventually, you’ll see a screen that looks something like this, which is what I like to call the “point of no return” in this process. 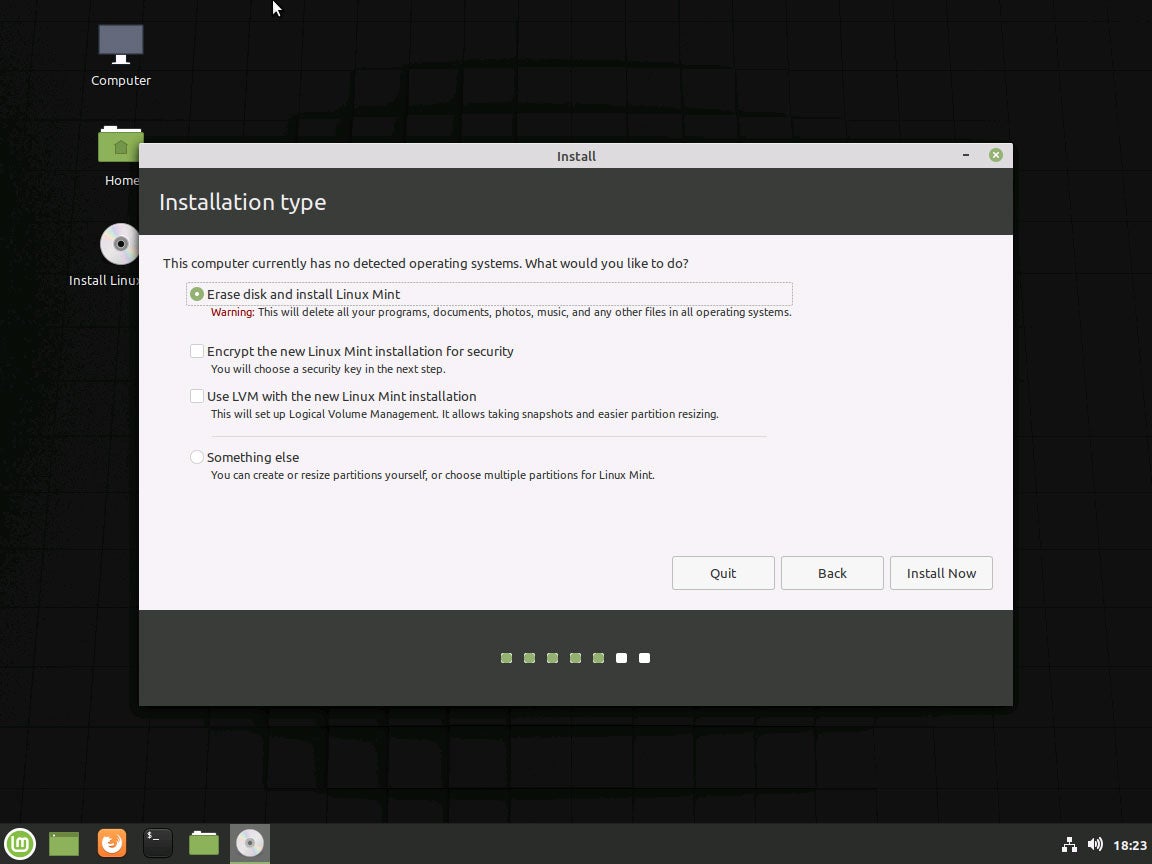 Sure, you could create separate partitions on your primary drive Linux Mint and Windows 7. It’s a great alternative if your system isn’t strong enough to handle a virtual machine, but you’d like the ability to use Windows 7 for tasks you can’t otherwise complete within Linux. I’m not going to get into it in this guide, but know that dual-booting both operating systems is an option. In fact, Linux Mint makes this easy for you, in a screen I can’t show you because I installed this OS on a blank virtual machine (for convenience’s sake). Yes, I’ll soon be running a VM inside a VM. Insert Hans Zimmer’s Inception score here.

Once you’ve made your choice—I stuck with the default options—you’ll soon be asked to create a user name and password. Standard stuff. After that, Linux Mint will begin the process of wiping your drive and installing the OS. Here’s hoping you backed up your critical information from Windows 7, like I advised earlier.

When Linux Mint starts back up again, you won’t need your CD or USB key anymore, and your screen should look like this: 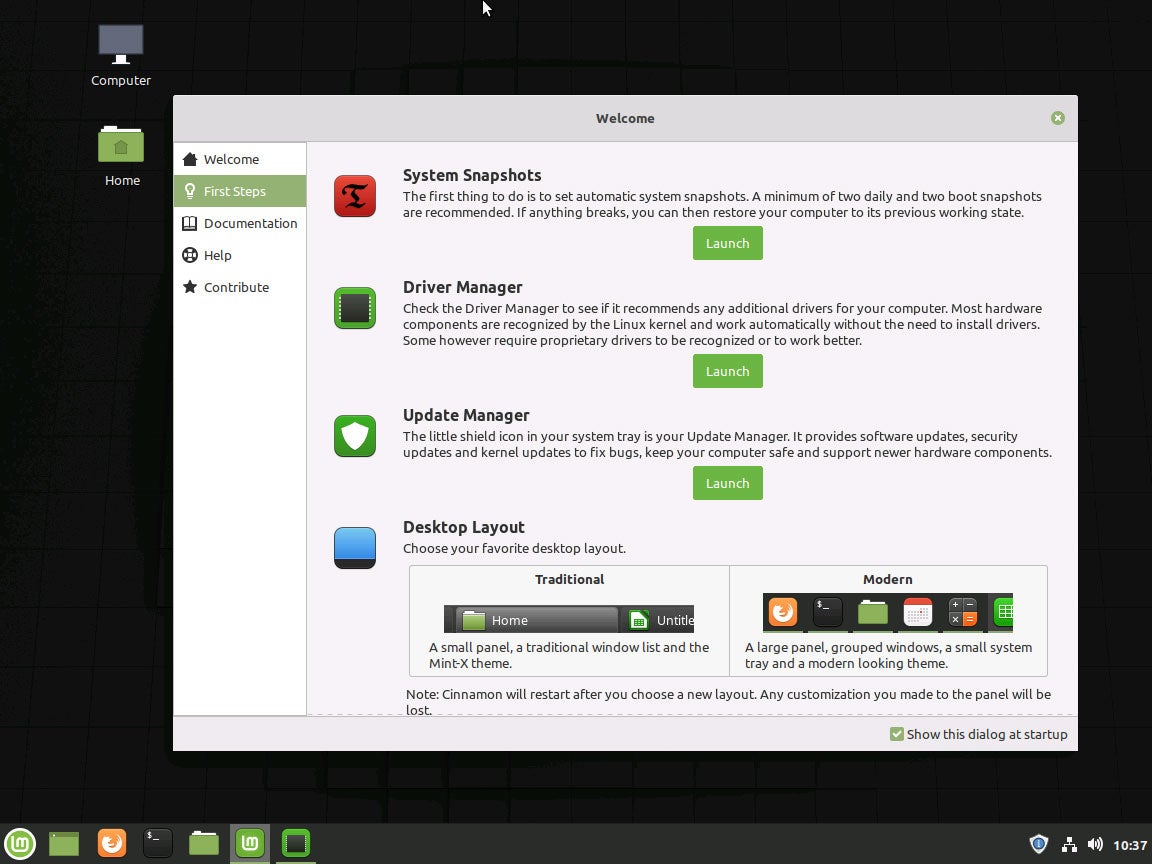 Ah, the fresh scent of a new operating system. Tempted as you might be to start re-downloading your files onto your new OS—from the cloud, from an external storage device, or from wherever else it is you stored your Windows 7 data—resist the urge just yet. Pull up Driver Manager to see if there’s anything new for your system that you need to update or install, and then do the same with Update Manager. Restart your computer as needed.

Getting Windows 7 back onto your brand-new Linux desktop

Assuming your system can handle it, virtualizing Windows 7 on your Linux desktop is a great way to keep the OS hanging around for those moments when there simply isn’t a Linux alternative for whatever it is you need to do. And to do that, we’ll be using VirtualBox to run an instance of Windows 7 directly within Linux Mint. It sounds complicated, but it’s not.

To get started, pull up Linux Mint’s software manager. You should see a listing for VirtualBox on the front page; if not, search for it. 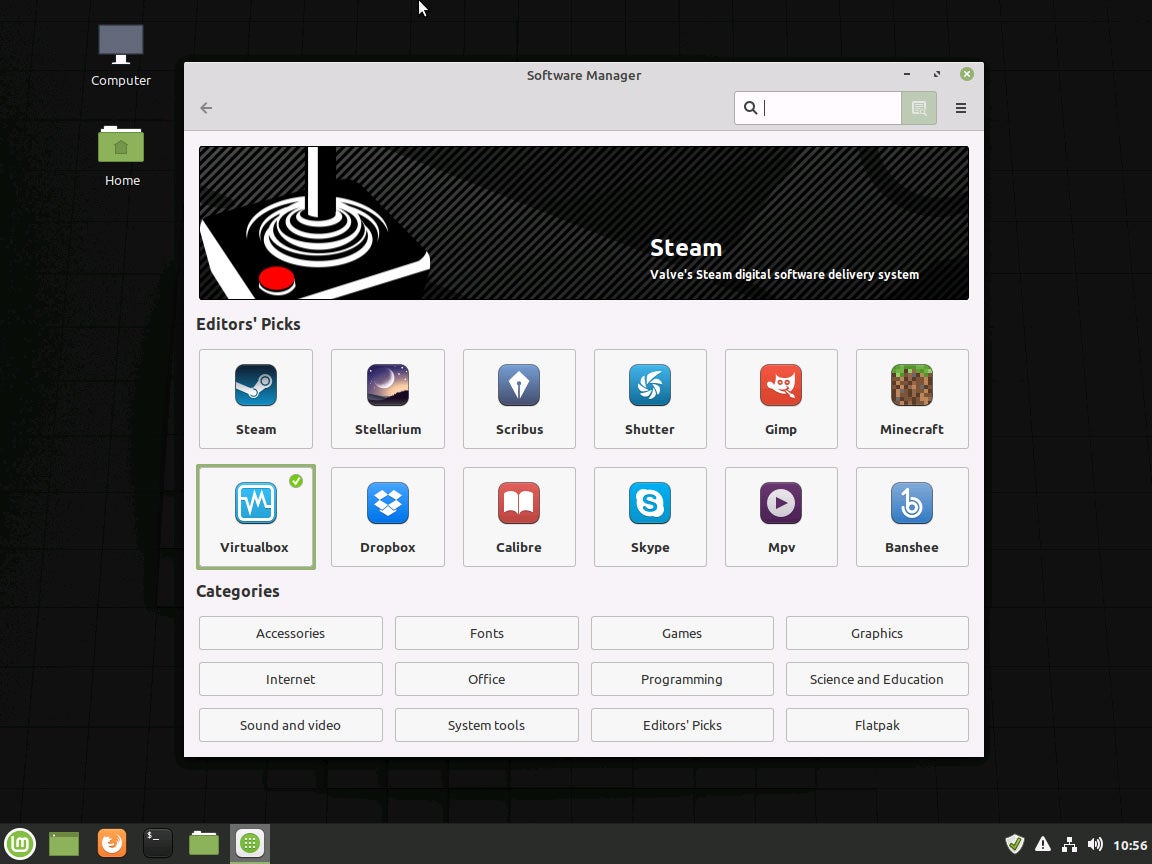 Installing the app is easy—just click on the button and do whatever the prompts request of you. 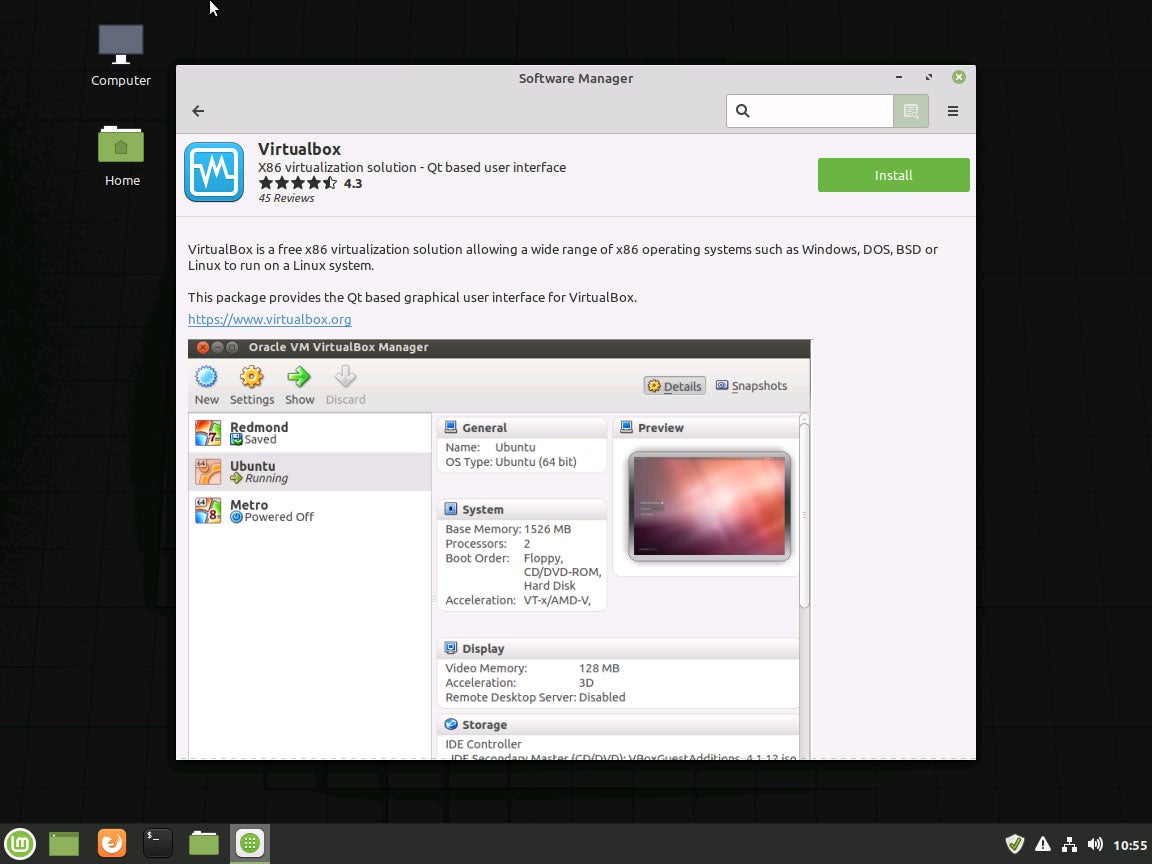 Launch VirtualBox, and you’ll see a boring and blank interface. Fix that by clicking the New button, picking Windows 7 as your operating system, and giving your virtual machine a useful name. 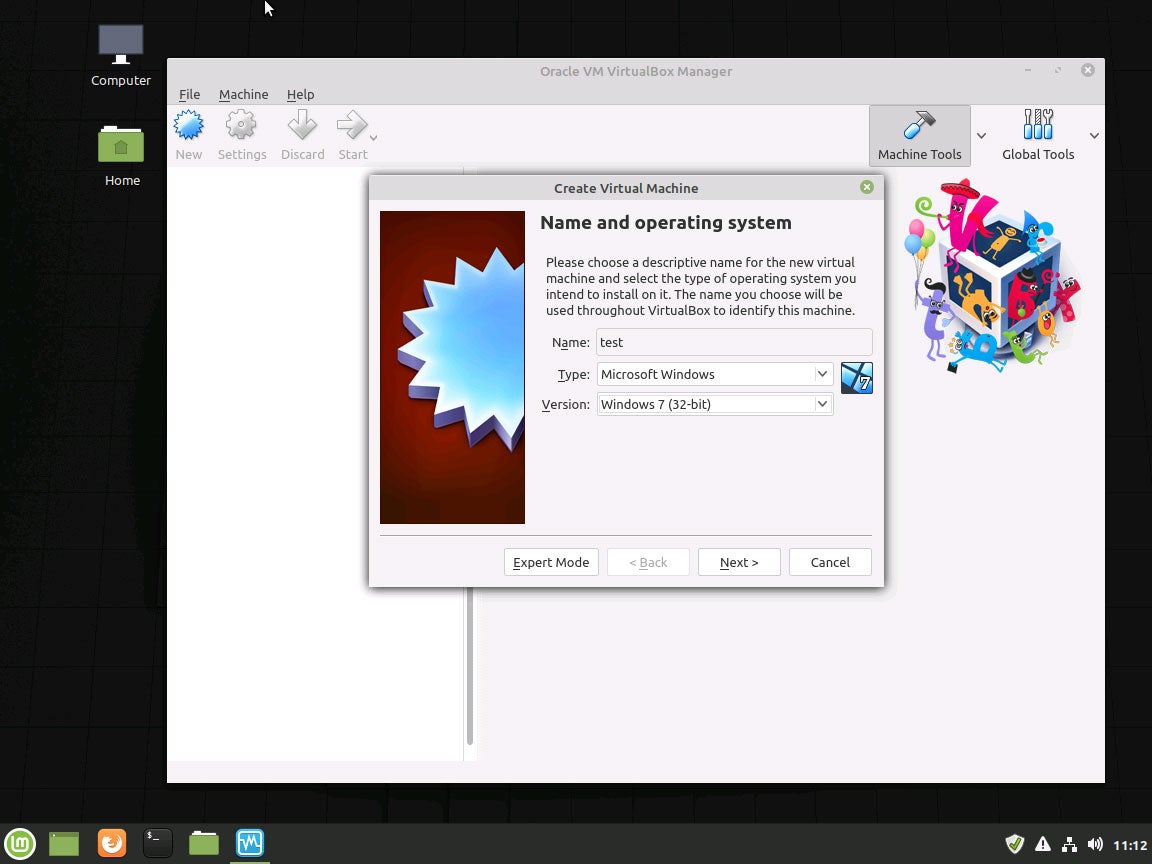 You’ll be asked how much memory you want to allocate to your virtual machine. Linux Mint needs about 2GB, at minimum, to run smoothly, and Windows 7 should get at least 1GB of memory if you’re running a 32-bit version of the operating system and 2GB if you’re bumping up to a 64-bit version. 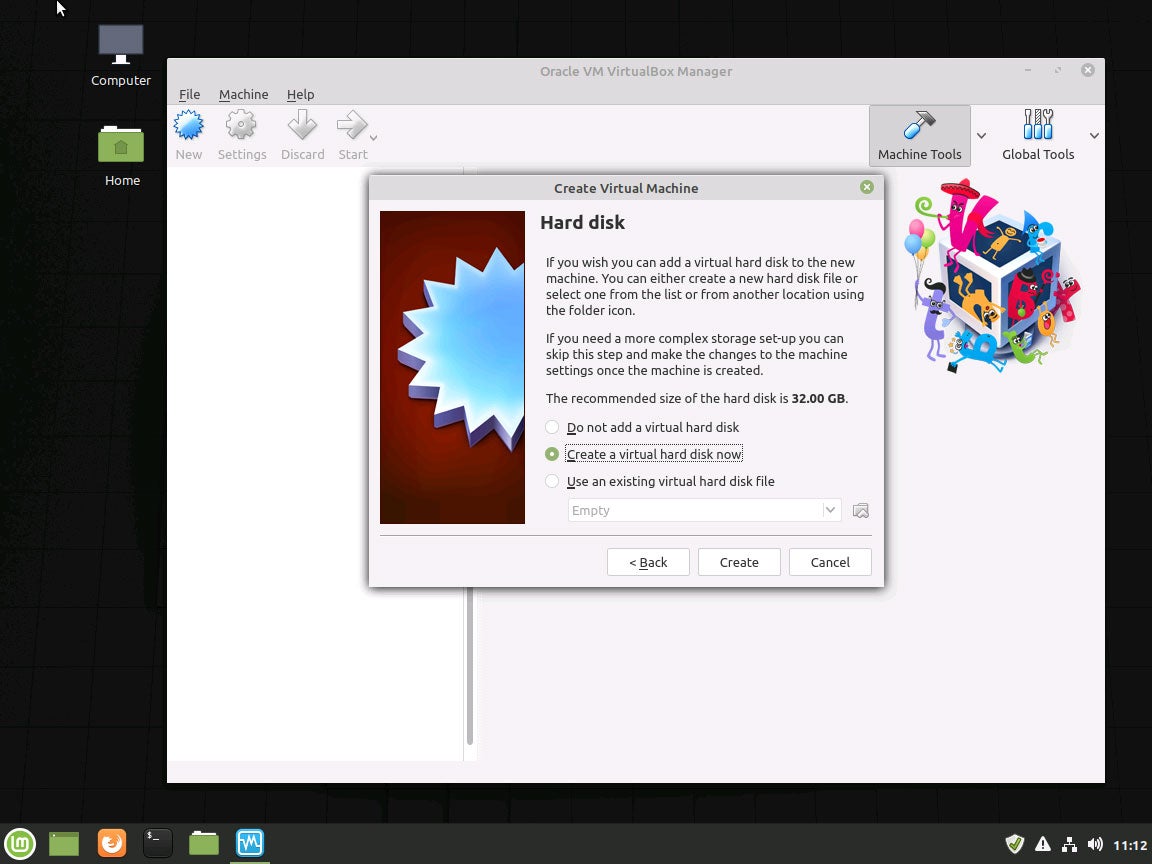 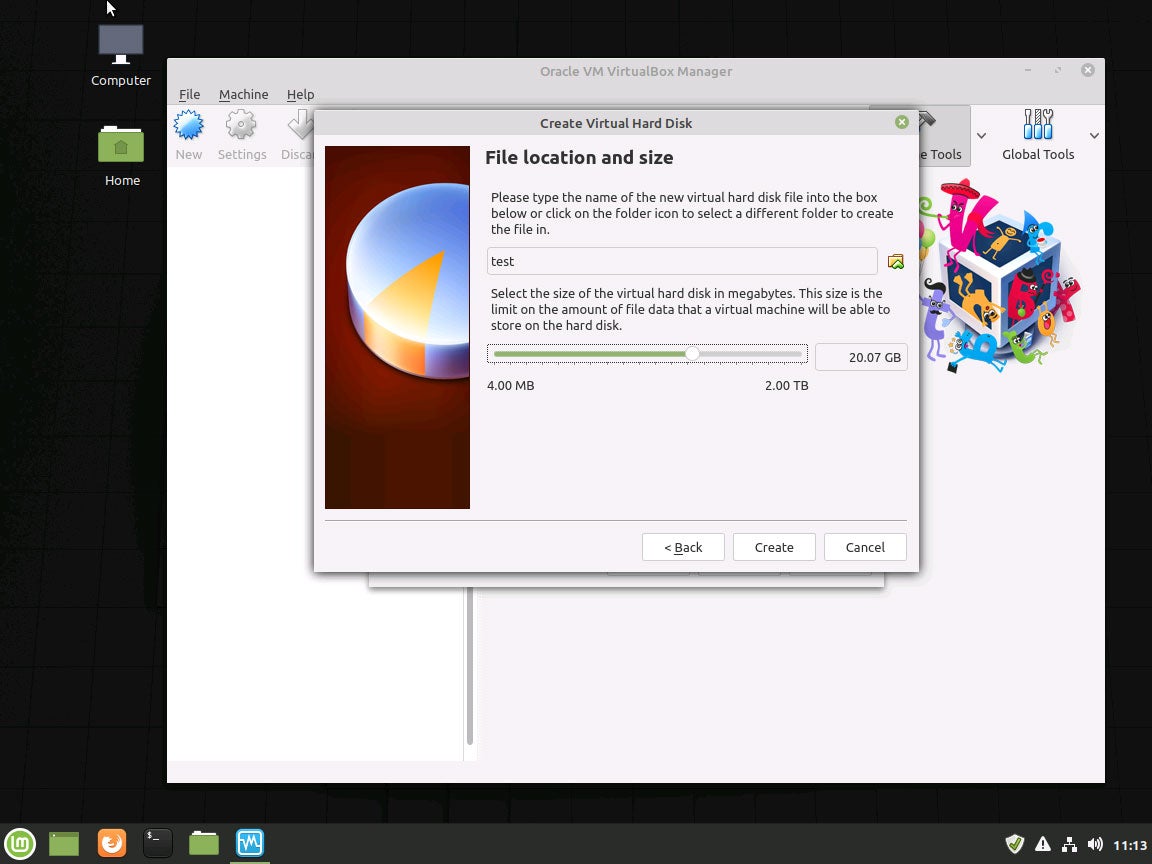 I’m skipping screens a bit, because this is the one that’s most important. How much space should Windows 7 eat up? (Screenshot: David Murphy)

If you choose poorly, don’t freak out. You can embiggen this virtual hard drive later. Life goes on.

Once you click on “create,” you’re halfway done. You’ll want to click on your virtual machine in the listing, and then click on the “Settings” icon. There’s plenty to play with in here, but I recommend checking out two key sections: ”System,” which will let you assign additional processors to your virtual machine if you want to boost its speed a bit, and the ever-critical “Storage.”

Once you get to “Storage,” you’re going to want to take a moment to pull up a web browser in Linux Mint and navigate over to Microsoft’s site, where you’ll be able to download a full disk image (.ISO) of Windows 7. Yes, you’ll need your product key for this.

Once you’ve downloaded that .ISO to Linux Mint, head back to VirtualBox’s storage settings. Click on the disc icon under “Storage Devices,” and then click on the similar-looking disc icon on the right side of the window. Select “Choose Virtual Optical Disk File,” and go find that Windows 7 .ISO. 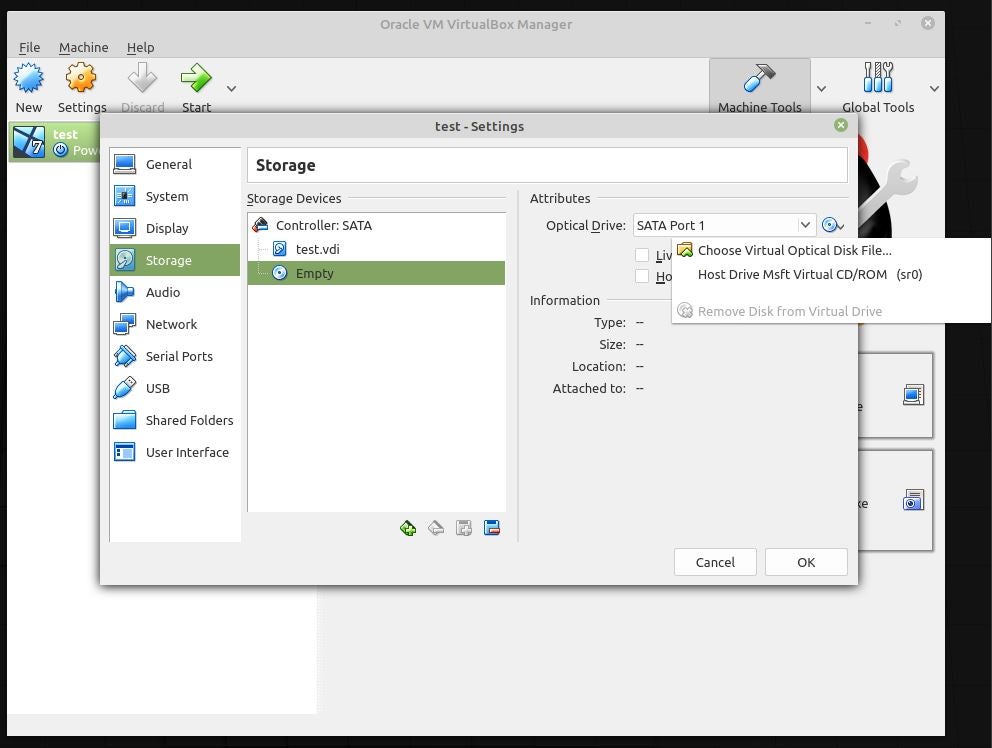 There’s more you can play with in Settings—like sharing a folder from Linux Mint (like “Downloads”) that you can then pull up in Windows 7, if you want—but you’ve now checked off all the basic requirements. You can fire up your virtual machine via the big green “start” arrow on the main screen and begin the process of installing and configuring your new Windows 7 installation. 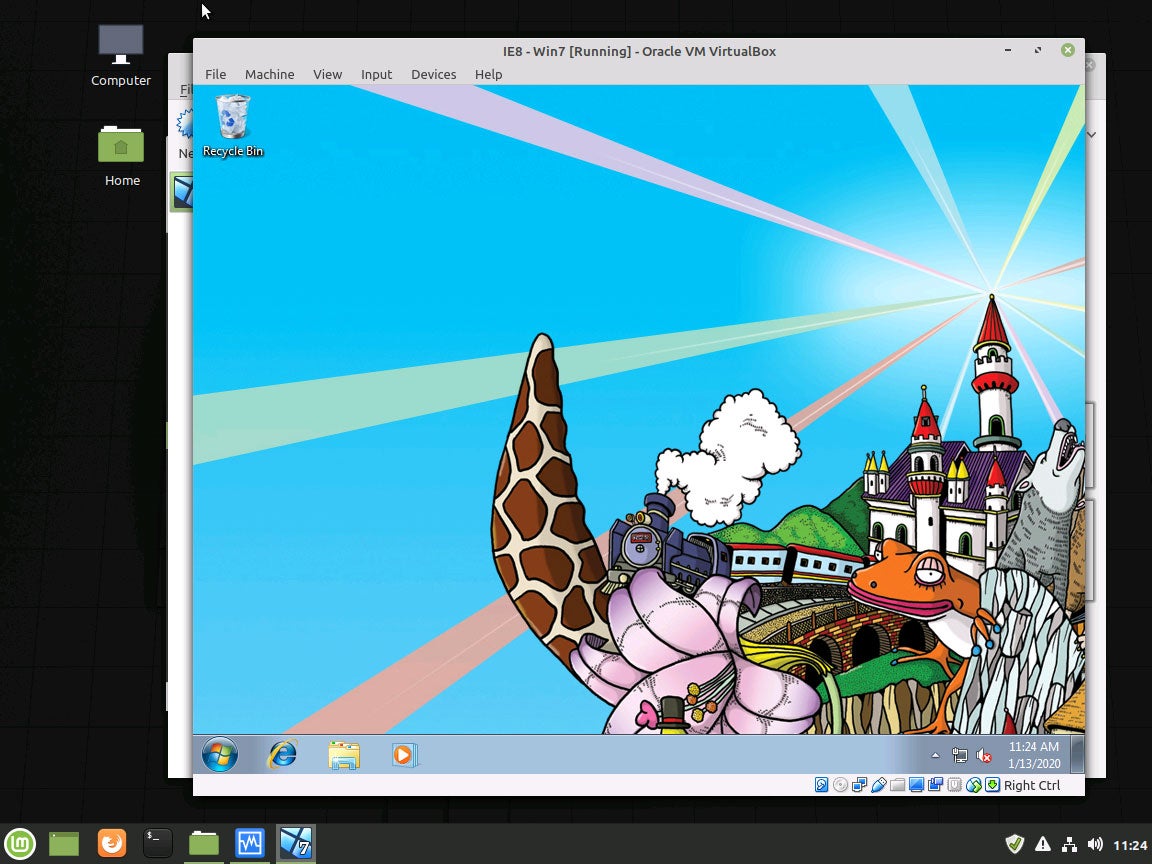 After that, it’s back to the basics: Make sure you’ve grabbed any updates you need from Windows Update and have installed whatever apps you plan to use. My advice is to resist getting hooked back into Windows 7 once again. The OS might seem more familiar than Linux Mint, initially, but if you can accomplish a similar task in Linux that you could in Windows, opt for the latter. Your performance will be better, first of all, and you’ll be doing whatever it is you’re doing in a more secure operating system.

Apps to get you started with Linux Mint

If you’re still a little, “what do I do next?” whenever you launch Linux Mint, I understand. Let’s get you up to speed with some useful apps. Were I looking to use Linux Mint like I use Windows, I’d hit up the aforementioned Software Manager and grab these apps:

Of course, there are plenty of others worth installing, too (Steam? Discord?). These are the basics, but Linux Mint’s Software Manager makes it incredibly easy to find and install more.