How I Reduced My Carbon Footprint

As an international tech journalist, I travel pretty frequently. Whether it’s for a phone launch, a movie, an auto show, or just for the hell of it, we’re pretty much always on the move. And that is not particularly ideal when you think of the impact it has on the planet.

My personal situation is probably pretty different from that of the average American and even from the rest of the folk I work with. While I’m able to work from home and attend grad school largely online, I have an apartment in Philadelphia for the once- or twice-weekly occasions when I have to attend an in-person class. My husband is Canadian and is trying to cut down on travel to the States while his green card application is being reviewed.

The rest of my family and friends live down in Texas. I love motorsport and make a point of travelling to a few races a year, some for fun and some for work. And this year, I started attending my first automotive events that weren’t race-based, like driving the Hyundai Veloster N or going to my first track day.

Because of all that, I’m pretty nomadic—and I have been since I was twelve, when my parents divorced and moved to opposite sides of the country. ‘Normal’ for me is not being in one place for more than a month at a time. It’s living out of a suitcase more regularly than I get a chance to hang clothes in a closet somewhere.

But it wasn’t until this year that I started to really think critically about what kind of an impact that was having on the planet. As I drove through Iceland for a personal vacation, passing signs that warned me not to step off the path and onto delicate wildlife, I realised that this was quite possibly the very worst thing I could be doing for a planet ravaged by the effects of climate change. And, at that point, I was only just starting off a month-long trip that would take me to multiple different countries.

I haven’t been able to put it out of my mind. So I decided to take a look back and see, exactly, what my carbon footprint would be using a calculator on The Native Conservancy, which enabled me to look at all aspects of my life, from travel all the way down to diet.

According to their research, the average person’s carbon footprint in the United States is 16 tons (14.5 tonnes). Mine is 55 tons (49 tonnes). 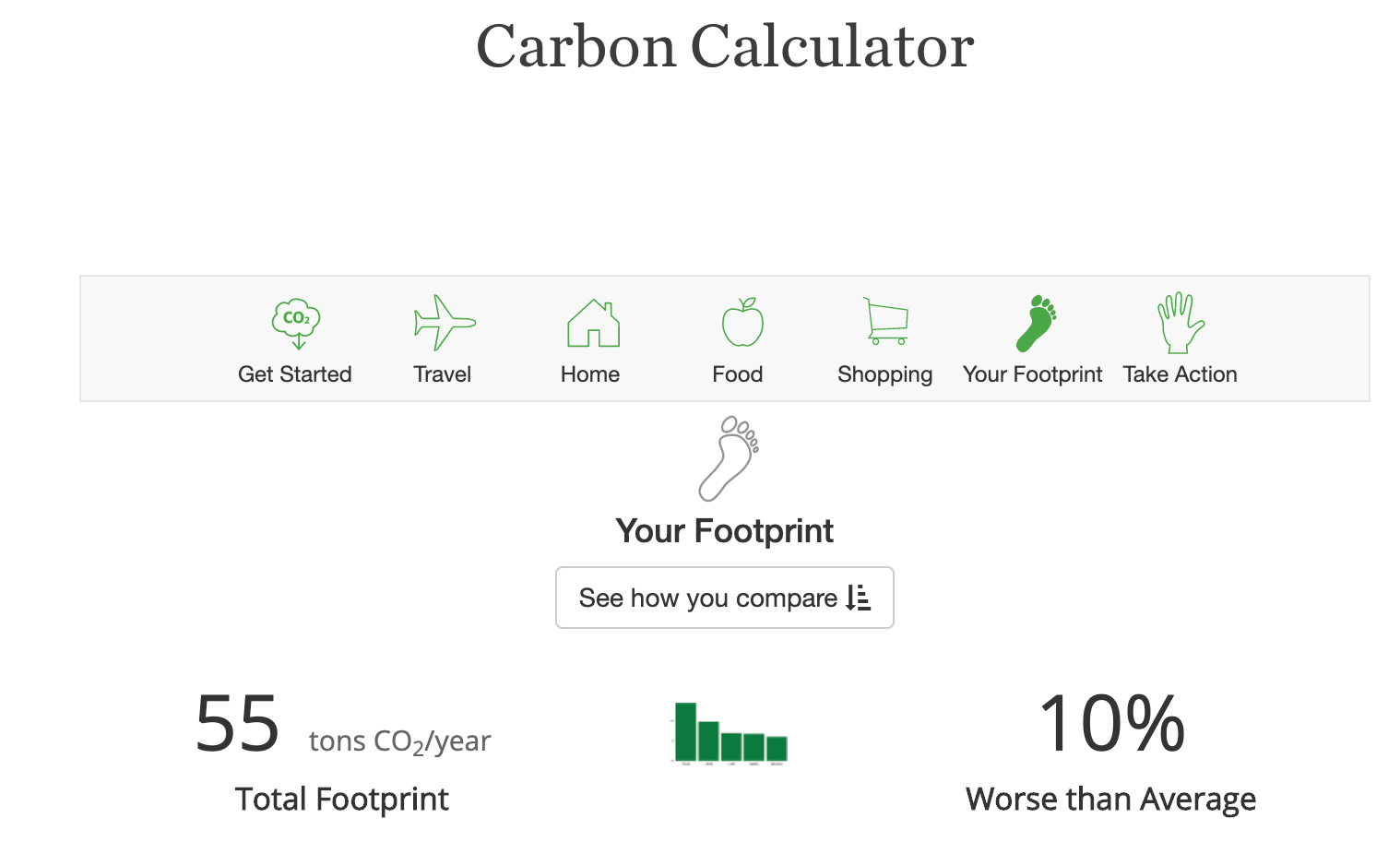 I’ve travelled almost 145,000 kilometres this year, most of them by air and car; public transit makes up like three per cent of that total at most. I rent a spacious apartment in Philly, even when I’m not there for months at a time. I buy a lot of shit off the internet because I’m often not in one place long enough to do a proper shopping trip. And, as someone still working on recovering from a few years of an eating disorder, my 2019 New Year’s resolution was not restricting my diet in any capacity for the first time in my life.

I knew finding out the actual number was going to be rough. But, man—over three times the national average? That’s really fucking bad.

Yes, massive companies are still the biggest problem. Just 20 firms are responsible for one-third of all carbon emissions, The Guardian reports, and in 2017, Fortune noted that 100 companies were responsible for 71 per cent of the world’s carbon emissions. These aren’t just everyday people like you and me. For systemic change to occur, solutions need to come from these companies, not just the common person. In the grand scheme of things, one single person isn’t going to do much of anything.

But that doesn’t mean I can’t at least try to do my part to bring my own carbon emissions to the national average as opposed to existing in a state of emissions opulence. So here’s what I’m going to do: Cut down on travel and opt for more public transit/bicycling.

This will probably be the hardest for me, given that travel is essential to maintain pretty much all my personal and professional relationships. My job is literally driving cars, watching other people drive cars, or travelling to faraway places in the name of cars. I’ve driven thousands of miles to watch race cars go half as far. I’ve flown thousands of miles to then drive a thousand more. It’s terrible, it’s unsustainable, and I’m going to cut back.

Does that mean I’m going to go stir crazy? Weep quietly in my bedroom because goddammit I could have been at that race? Bike three miles round-trip to and from class in the dark? Convince my husband to drive down to see me so that it’s not my carbon footprint growing while I still feel massive amounts of guilt about the fact that I’m still part of the problem anyway? Take a fourteen-hour train ride instead of driving seven? Absolutely. And much much more. I’m going to have to try and find clever ways to cut back.

But fuck it. I’m going all in. Reversing climate change is going to take a hell of a lot of personal sacrifices from everyone, and if that means fundamentally rearranging the way I live my life, then I’ll learn how to do it and hope more folks will pick up on the example.

Everything else is pretty low-key:

I’m not going to do one of those “everyone needs to jump on my bandwagon!” posts—but I am going to be keeping an eye on my progress this year, hopefully dropping an update every now and then. My hope is that this time next year, I have something better to report, that I’ll have more of a human-sized footprint as opposed to a T-rex-sized one. In 2020, I’m going to do a hell of a lot better.