How To Make The Creamiest Vegan Green Bean Casserole

It is both easy and apparently cool to hate green bean casserole. Admittedly, “canned green beans mixed with canned condensed cream of mushroom soup topped with canned fried onions” doesn’t sound great, but hating on something because it comes from a can reveals more about the hater than the dish itself.

I don’t have much childhood holiday nostalgia, but green bean casserole—which my dad’s family calls “bean junk”—is the exception. Maybe it’s the MSG, maybe it’s the crunchy onions, or maybe I’ll take any excuse to say the word “junk;” whatever the case may be, I love the stuff. It may have no real texture besides soft mushiness and no real flavour besides salinity, but I will defend bean junk, goopy canned soup and all, til the day I die. Old school dump-and-mix casserole recipes endure because they’re easy and chock full of salt and fat, which means they taste really good. You don’t need to mess with a good thing.

With that said, I love a challenge, and this year I was determined to develop a killer vegan green bean casserole recipe. It’s a prime candidate for veganisation because the only inherently non-vegan ingredient is the soup. French fried onion bits contain no animal products, and neither do green beans. Vegan cream of mushroom soup probably exists in a can or box somewhere, but I didn’t see any at my Whole Foods—and I’m guessing homemade beats canned in this very specific instance.

I still have yet to taste vegan condensed mushroom soup, but to shamelessly brag for a second, I don’t see how it could beat what I’ve developed here. Sure, it’s a bit of a project compared to the classic, but trust me: It’s worth your time. The “soup” gets tons of mushroom flavour from a combination of nearly dehydrated roasted criminis and ground dried shiitakes, but the real secret is half a bottle of stout.

Reduced down to a dark, bittersweet sludge, it’s the perfect foundation for something that’s otherwise laden with salt, fat, and sugar. The extra depth and slight bitterness goes a long way towards preventing total salt overload, which is always a good thing. I’ve eaten countless servings of bean junk, both canned and homemade, and this one—the vegan one—blows them all out of the water. If you’re looking for a satisfying vegan take on a misunderstood classic, I’ve got you covered. Here’s how to make it. Once you’ve made the soup, this goes very quickly—just mix in frozen beans, top with crunchy onions, and bake. Frozen beans stay pleasantly crisp for a lot longer than fresh ones do, so don’t be tempted to get fancy here. Oh, and be sure your vegan sour cream or cream cheese contains gums, starches, and/or other stabilisers.

Without them, your casserole will separate into a godawful curdled mess in the oven. (My first attempt used puréed silken tofu and that is exactly what happened. It was indescribably foul. Learn from my mistakes.) We love a homemade cashew cream, but the commercial stuff is your best bet.

To assemble the casserole:

To make the soup, set a rack in the lowest position and the highest position in your oven and preheat to 220 degrees Celsius. While it preheats, tear your crimini mushrooms, stems and all, into roughly half-inch pieces and toss with 1 tablespoon of neutral oil in a large bowl. Season with salt and pepper. While the mushrooms roast, grind the dried mushrooms to a powder in a coffee or spice grinder. Set aside.

Heat the last tablespoon of neutral oil and the olive oil in a large, heavy pot over high heat until barely smoking. Add the onions and shallots and immediately reduce the heat to medium-high. Cook, stirring frequently, for about five minutes, until the onions and shallots have softened and browned around the edges. (Don’t worry if they char a little, that’s fine and even good.) Add the garlic and cook for another minute or two, then stir in the ground mushrooms and garlic powder. Season with salt and pepper.

Pour in the beer and soy sauce and bring to a full boil over high heat. Let it boil until the mixture is sludgy and the oils start to separate, about 10 or 15 minutes, stirring occasionally to keep the bottom from scorching. Reduce heat to medium and sprinkle in the flour. Cook, stirring constantly, until the roux balls up and starts to stick to the bottom of the pan. This should only take a minute or two.

Add the chickpea broth or veggie stock little by little, stirring to help the roux dissolve. Add the sugar, MSG, and roasted mushrooms. Bring the pot to a full boil once more, then reduce heat to medium and simmer for another 20 minutes, or until the mixture has reduced by two-thirds. It should be deep chocolaty brown and thick enough that your spoon leaves a trail. 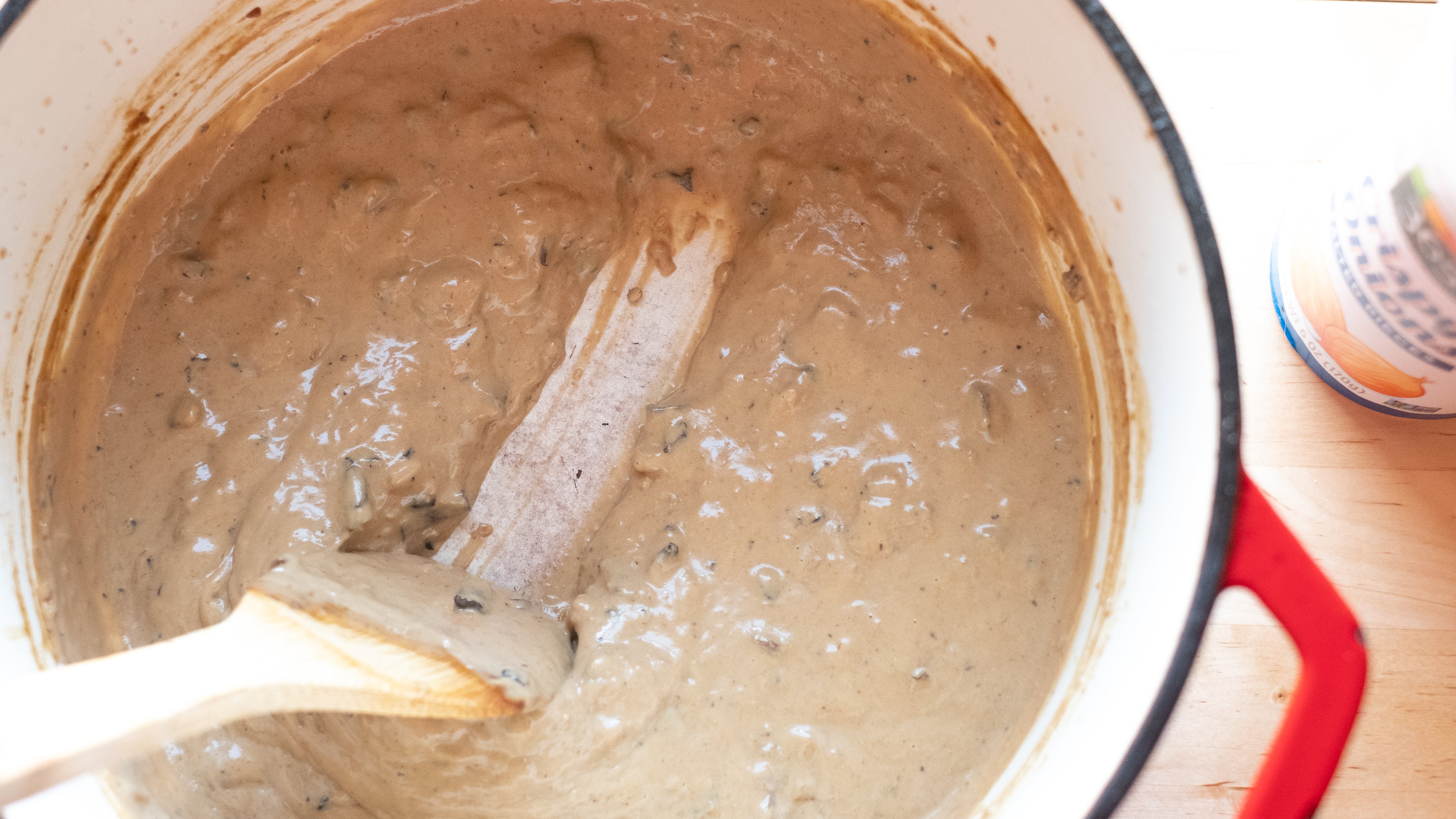 Off heat, add the vegan sour cream and vinegar. Stir to combine. Taste the sauce and add anything it’s missing—it needs to be intensely salty and super creamy, with enough sugar to round it out. Don’t be afraid to go hard on the seasoning; the beans need it. If desired, transfer the soup to a storage container and refrigerate for up to a week.

On the day you plan to serve the casserole, mix the frozen beans evenly with the soup (no need to defrost) and transfer to a baking dish, pan or a combination of smaller dishes. Absolutely blanket the surface with crispy onions. 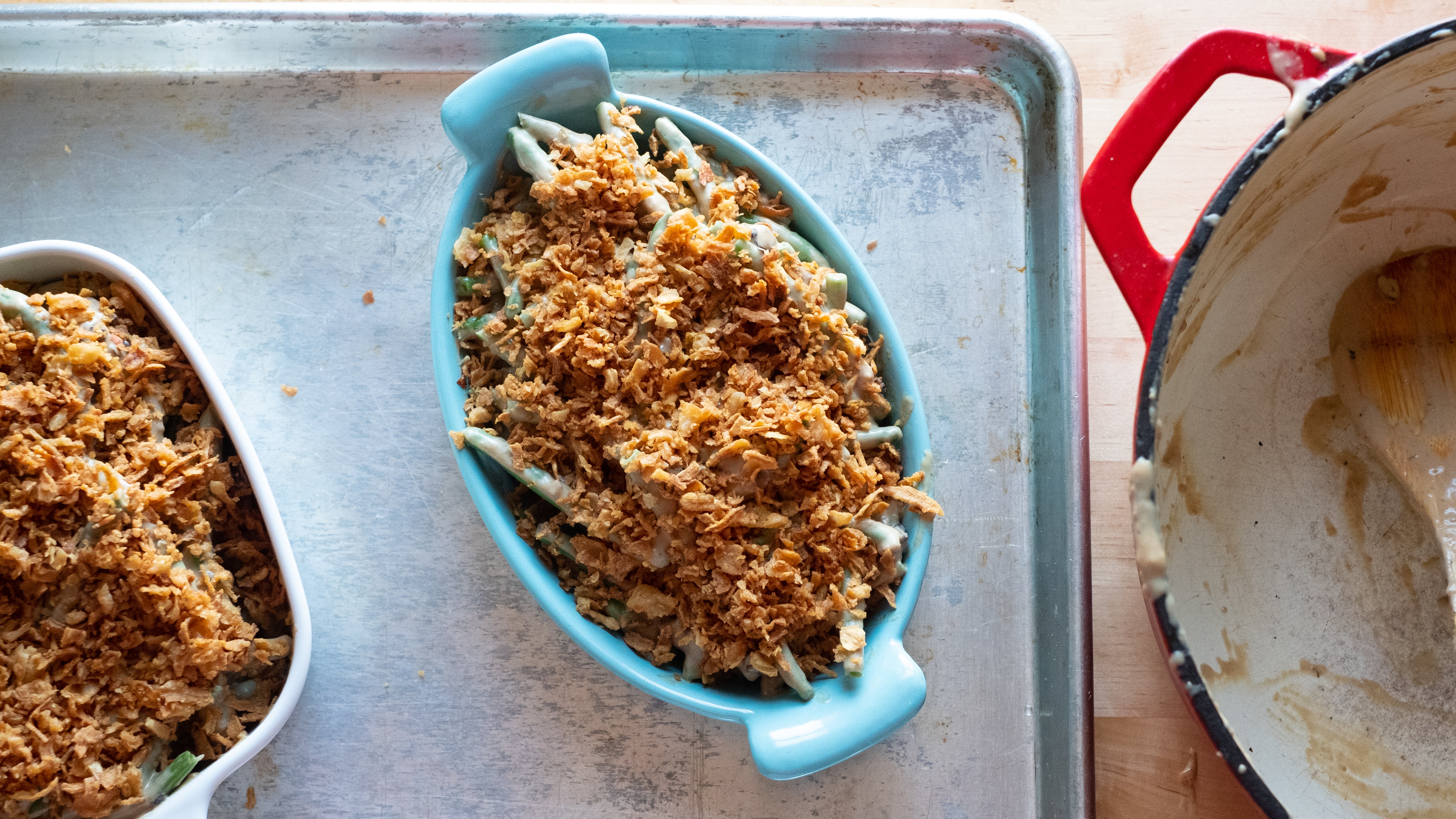 Heat oven to 180 degrees Celsius, place the casserole dish(es) on a baking sheet, and bake for 35-45 minutes, until bubbling hot and crispy on top. Serve as soon as possible—this is best straight from the oven.