How To Make Your Own Vegan IKEA-Style Meatballs

Inspired by the success of their vegan hotdogs and soft serve, IKEA has announced plans to roll out a plant-based version of their classic pork and beef meatballs in the next year. But the official launch in winter 2020 is still a long ways off, and if you can’t wait that long, I’ve got your back. You don’t need obscure ingredients or hours of time to make bangin’ Swedish “meatballs” at home.

Before I could develop a vegan copycat worth eating, I had to remember what the iconic IKEA dish tasted like. I hadn’t had their meatballs in ages—I’m dedicated to fifty-cent hotdogs and lingonberry slushies—so I schlepped down to IKEA last weekend for lunch. Surprisingly, the meatballs were much blander than I remembered—they mostly tasted like pork, with the barest hint of onion.

The texture was dense and bouncy, much closer to uncased sausages than tender, fluffy Italian-American meatballs. As for the gravy, it seemed like a standard roux-thickened meat stock. My favourite part was the vegetables—crisp, nicely salted, and just buttery enough—but the meat is the unmistakable star of the meal. 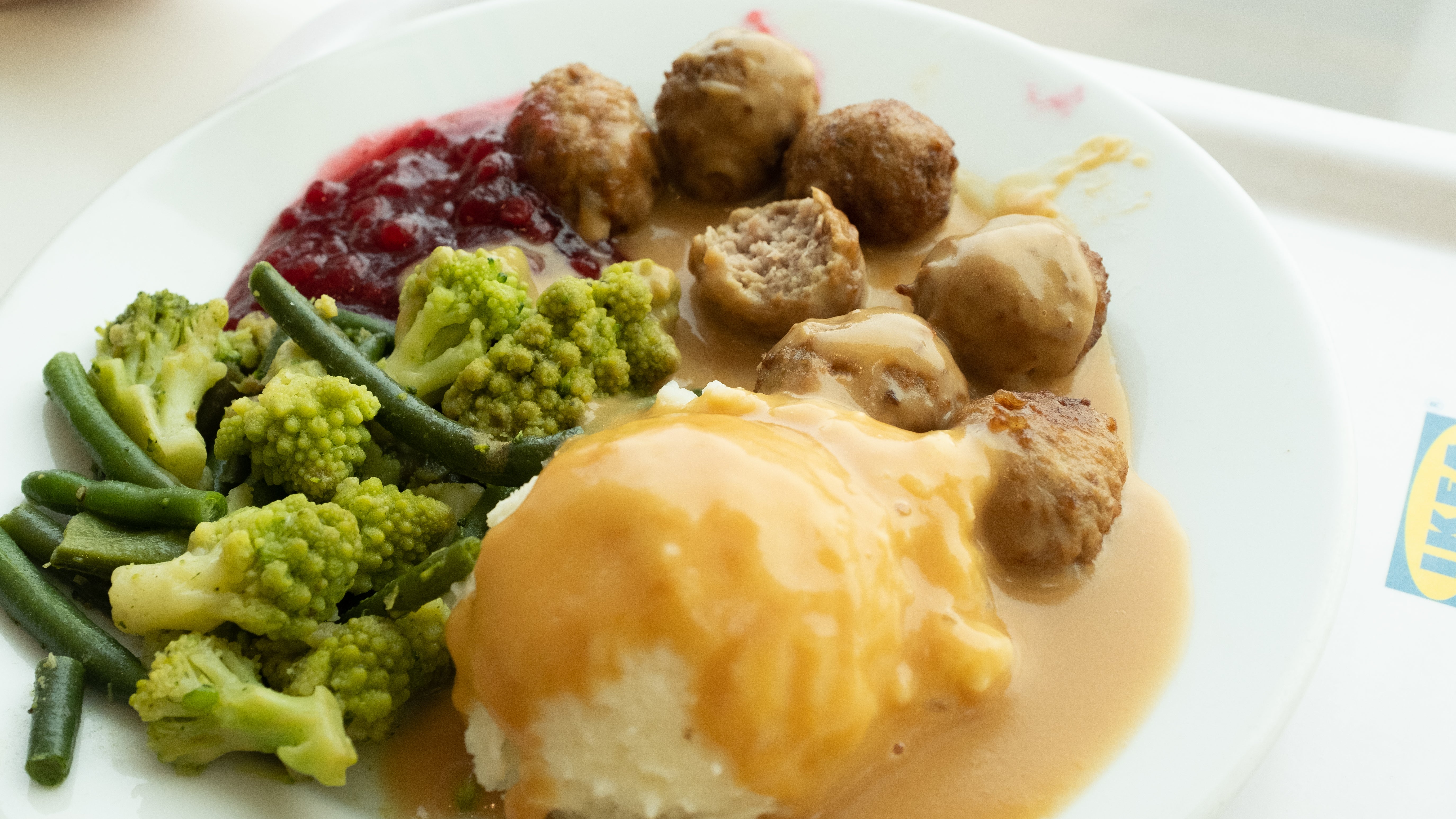 This makes creating a vegan version difficult. You can’t just swap vegetables in for meat and expect an even vaguely similar result. Making up the difference usually calls for specialty ingredients that are expensive, hard to find, or both. Closely approximating the bouncy texture of those meatballs requires busting out the powdered plant protein (usually vital wheat gluten) and maybe something gelatinous like agar agar. I wouldn’t be surprised if either or both figure heavily into IKEA’s grand vegan meatball plan.

For several reasons, I took a different path. I hate making seitan from scratch because it absolutely must be cooked twice: first steamed so the dough cooks through and stays moist, then broiled or fried to crisp it up.

Skip the steaming and you’ll get a dry, tough brick; skip the frying and you’ll be chewing on a wet sponge. I would never ask anyone to steam dozens of tiny meatballs and then pan-fry them in multiple batches.

Also, what’s the average person going to do with a mostly-full package of vital wheat gluten? Make more steamed-then-fried meatballs? No way. I wanted a delicious, vegetable-based mixture that could be rolled into balls, tossed onto a sheet pan, and baked.

To accomplish this, I turned to some reliable vegetable buddies: eggplant and white button mushrooms. Both of them soak up oil like nobody’s business, which is exactly what you want in this case. Cooking them down to a paste with plenty of onions, garlic, olive oil, soy sauce, and sugar creates a super-flavourful base, which is something vegan meatballs really need.

Cashews add heft and subtle nuttiness, while vegan mayo keeps the mixture moist; an absolute shitload of garlic powder and a touch of vegetable bouillon round out the seasoning. Panko, added at the very end, holds the whole mess together. Once they’re rolled out, the balls go straight into the oven—no chilling or waiting around. They’re less bouncy than the originals, but the texture is otherwise spot-on, and the flavour is miles ahead of under-seasoned ground pork. Every last scrap of seasoning gets sucked up by the eggplant and mushrooms; that tiny hit of MSG from the bouillon keeps you coming back for more. Best of all, they hold their shape perfectly, even when doused in gravy.

Let’s talk about the gravy, which, along with the lingonberry jam, basically carries the IKEA meatballs. Most Swedish meatball recipes use sour cream gravy, but I couldn’t detect any dairy in the IKEA version. Still, I figured that a little extra richness couldn’t hurt, especially when boxed vegetable stock is involved.

So I added a scoop of the cooked vegetable mixture and some homemade cashew cream, then puréed everything together with a stick blender. The resulting gravy is rich, creamy, and deeply flavourful—exactly what you want to pour over mashed potatoes, savoury little vegan meatballs, and, of course, lingonberry jam. Why wait for IKEA’s version when this one is so good? I’m all about flexible ingredients lists, but cashews are the nut for this recipe. They easily purée with just an hour of soaking and add bulk without screaming “Hey! Check out all these cashews!” Even if you skip the homemade cashew cream (store-bought vegan or regular sour cream works great), keep the cashews. Unsalted is my preference (for once), but salted cashews are fine if you go easy on the salt elsewhere.

This will make about 50 small (one-inch diameter) balls and two-to-three cups of gravy, which is enough for at least six servings. Freeze leftover balls on a sheet pan until solid, then transfer to a freezer bag for long-term storage. They reheat well in the microwave or oven.

First, make the cashew cream for the gravy by soaking half a cup of cashews in two or three cups of hot water. Set aside. (Skip this step if you’re using sour cream.) 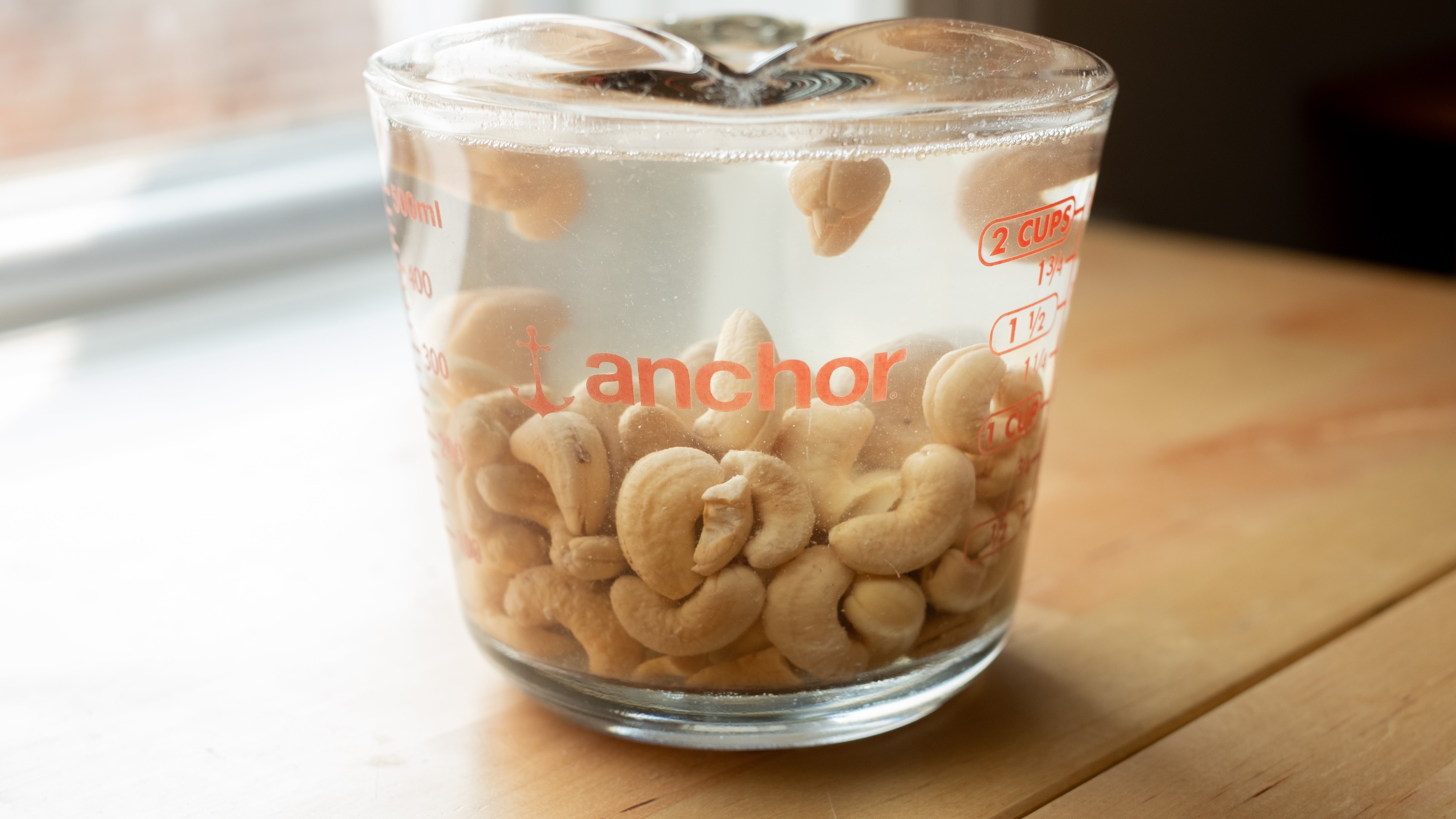 This is what they’ll look like after about an hour of soaking. (Photo: A.A. Newton)

For the gravy, heat two tablespoons of olive oil in a medium saucepan over medium-high. Add the onions and cook until they’re soft and dark brown at the edges, about five minutes. Season lightly with salt and pepper, stir in the garlic, and cook for another minute, or until the garlic barely starts to brown.

Add the flour, reduce heat to medium-low, and stir constantly for two or three minutes. If the pan looks dry, add a little bit more oil.

Stir in the vegetable stock, bring the gravy to a boil over high heat, and turn the heat all the way down. Cover the pot and let it simmer while you make the balls.

Heat two more tablespoons of olive oil in your biggest skillet over medium-high heat. Add the onion and cook until it’s almost black at the edges, then toss in the mushrooms and stir for a few minutes—they just need to deflate a little bit.

Add the eggplant cubes, sliced garlic, and the water. Sprinkle with salt and pepper cook for 15-20 minutes, stirring occasionally, until the vegetables have shrunk considerably and start to stick to the bottom of the pan. Add the soy sauce and sugar, taste, and adjust the seasoning.

Stir half a cup of the vegetable mixture into the gravy and transfer the rest to the bowl of a food processor. Cool slightly. 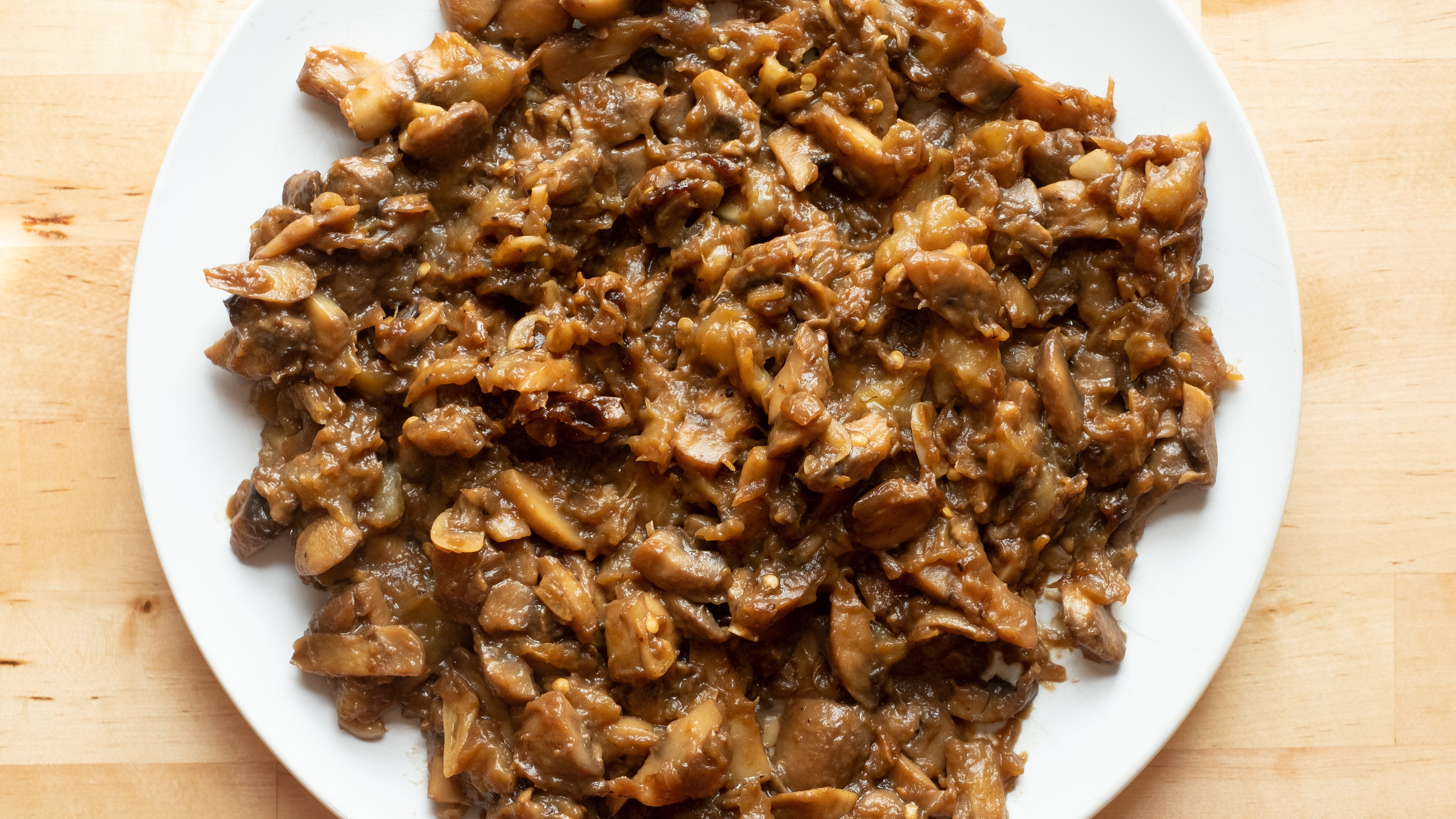 If your skillet has loads of brown bits stuck to the bottom, return it to the heat and deglaze with water, scraping to dissolve all of the fond. You won’t need a ton of water; start with a few tablespoons and add more if needed. When everything is nicely dissolved, scrape the contents of the skillet into the gravy and stir to combine.

To make the balls, process the vegetables with a cup of dry cashews (not the ones you’re soaking), the garlic powder, and the mayonnaise until quite smooth. Season to taste with powdered vegetable bouillon, MSG, or mushroom seasoning.

Finally, add the panko to the food processor and pulse a few times, until just barely combined. You should have a deeply unappealing grey-brown paste. 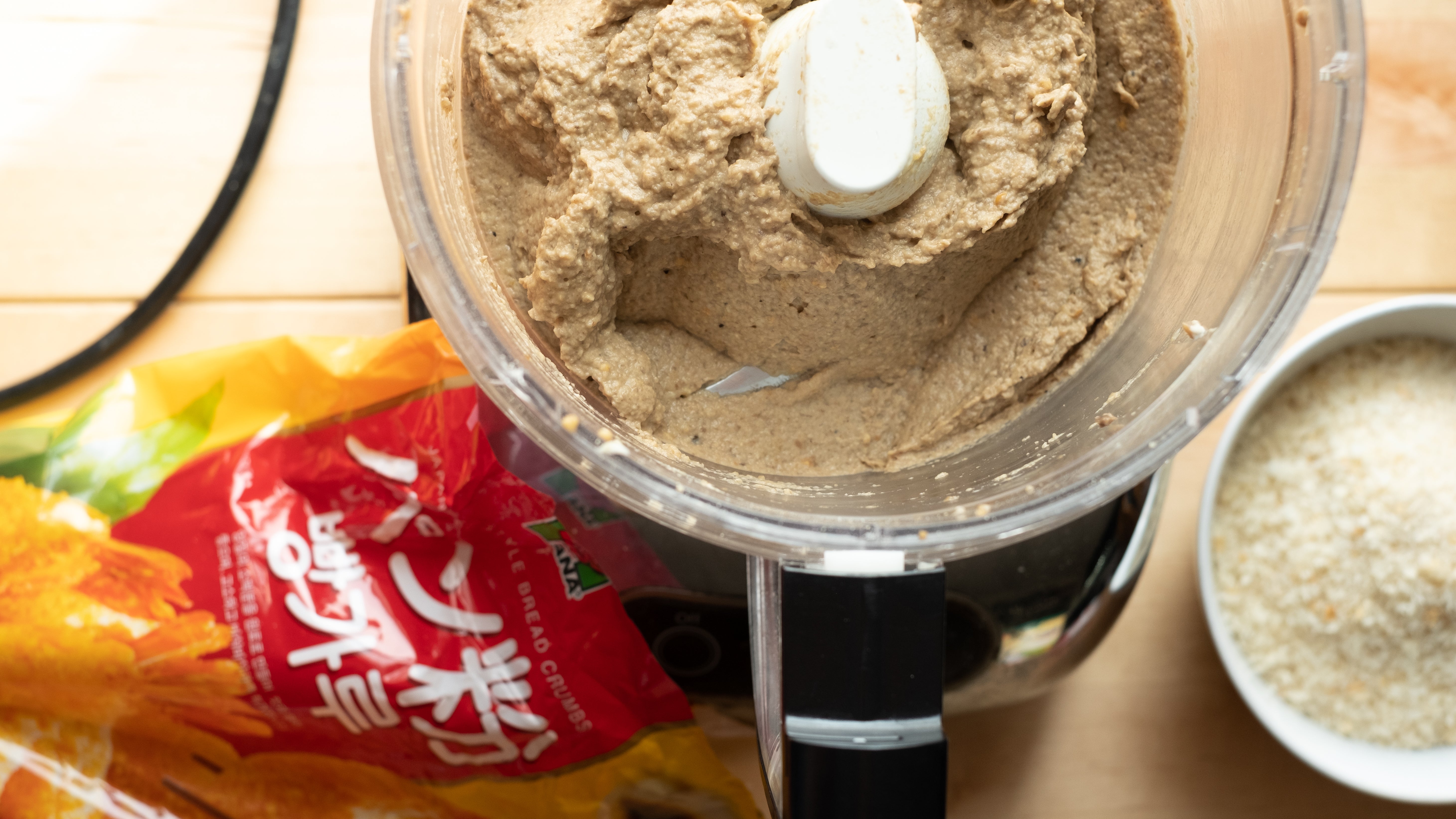 Transfer the mixture to a bowl and fold in anything else it might need: another dollop of mayo if it looks dry, a few more spoonfuls of panko if it looks sloppy, and more seasoning to taste. Don’t worry if it’s looser than you expected; even the softest test batches held their shape in the oven. Now for the messy part. Heat your oven to 175C, line a sheet pan with parchment, and get your hands wet. Roll the mixture into balls roughly 3cm in diameter, transferring them to the pan as you go. Periodically rinse the sticky buildup off your hands to keep things moving along. Bake the rolled balls on the top rack of your oven until nicely browned, 20-30 minutes. 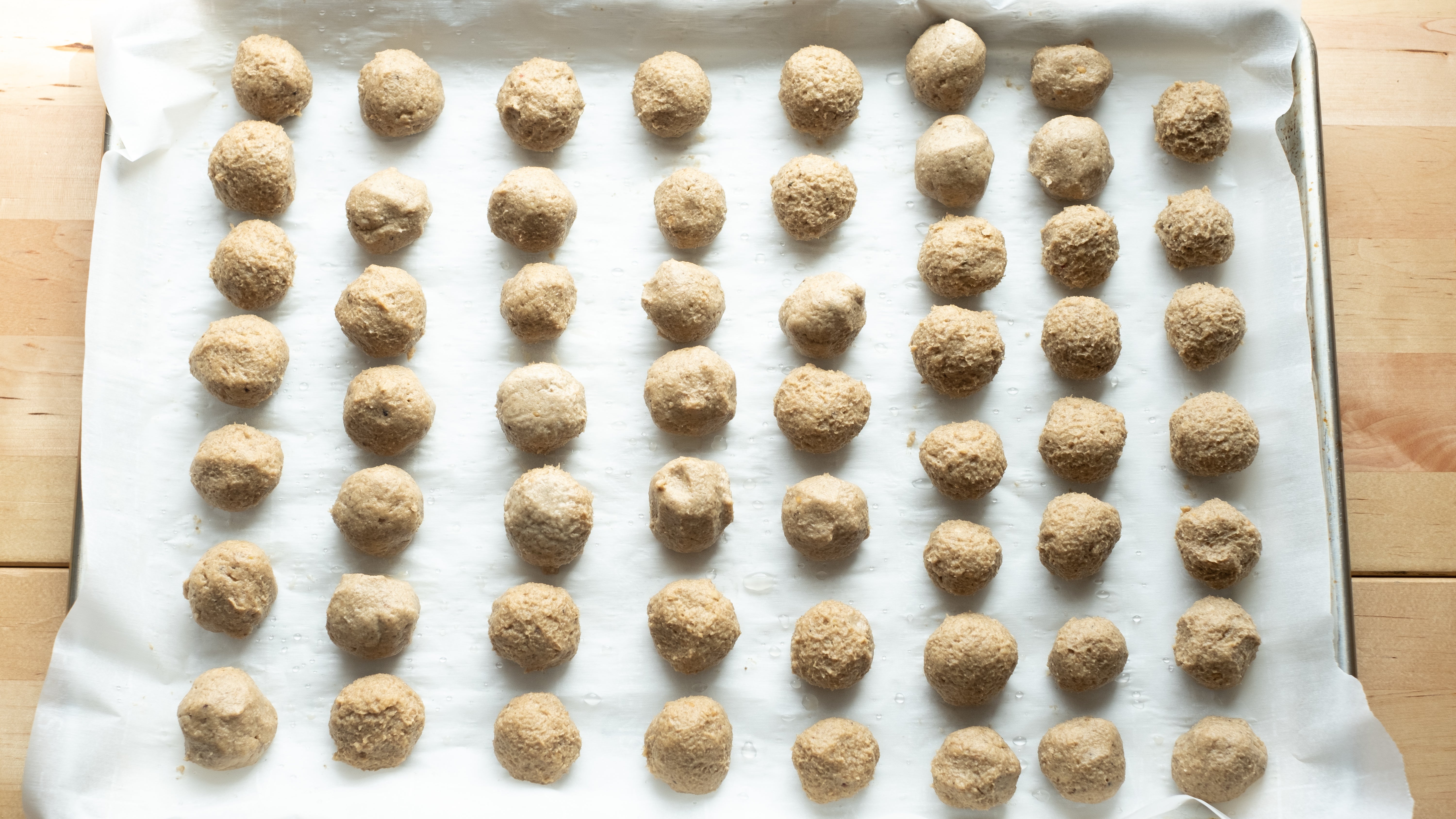 Meanwhile, finish off the gravy. Drain and rinsed the soaked cashews, if using, and blend them with a few tablespoons of water until smooth. Scoop 1/4 cup of the cashew cream (or prepared sour cream) into the gravy and blend that until smooth, too. I used a stick blender for both steps, but a regular blender works just as well. Season the gravy to taste with lemon juice, salt, and pepper.

For the true IKEA cafeteria experience, serve your beautiful little balls with gravy, mashed potatoes, and a generous scoop of lingonberry jam or cranberry sauce. It’s every bit as delicious as the real thing, minus the animal products—not to mention the hassle of an actual IKEA run.