foodskillet
To sign up for our daily newsletter covering the latest news, hacks and reviews, head HERE. For a running feed of all our stories, follow us on Twitter HERE. Or you can bookmark the Lifehacker Australia homepage to visit whenever you need a fix.

There is only one GBC recipe for me and that is Alton Brown’s. Sure, I have a soft spot for the back-of-the-can version — who doesn’t — but it’s time that we stepped up our collective game. Every time I open the lid, a rainbow shoots out.

Big surface area? Check. Cooking with indirect heat? Check. The Outdoor Oven, aka The Grill, is here to save the day and is there a better side dish than green bean casserole? 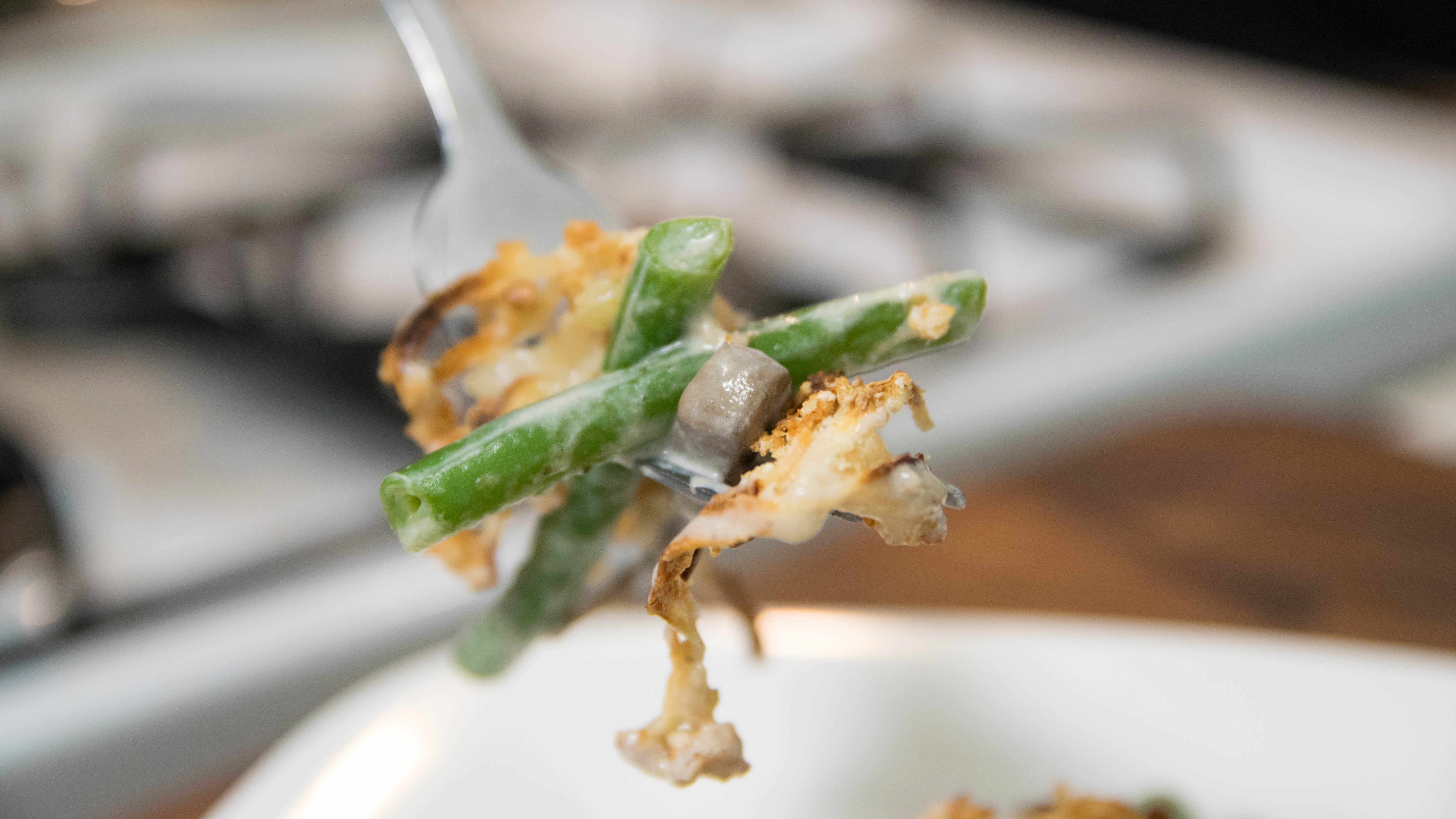 For the beans and sauce:

Now, Alton’s original recipe has you coat a cookie sheet with non-stick spray and roast the topping for 30 minutes at 250°C. That would basically turn my apartment into a slice of Hell, so grab a cast-iron frying pan.

Preheat your grill, aiming for a target temperature of 260°C to compensate for the heat lost when you open the lid. Lightly oil your pan with a high heat tolerance oil, such as a light olive oil. Not a puddle, just enough to coat the interior of the pan. I’ve got a 30cm skillet here, which will afford me a decent amount of space for my onions and used about 1/2 tablespoon of oil to coat. 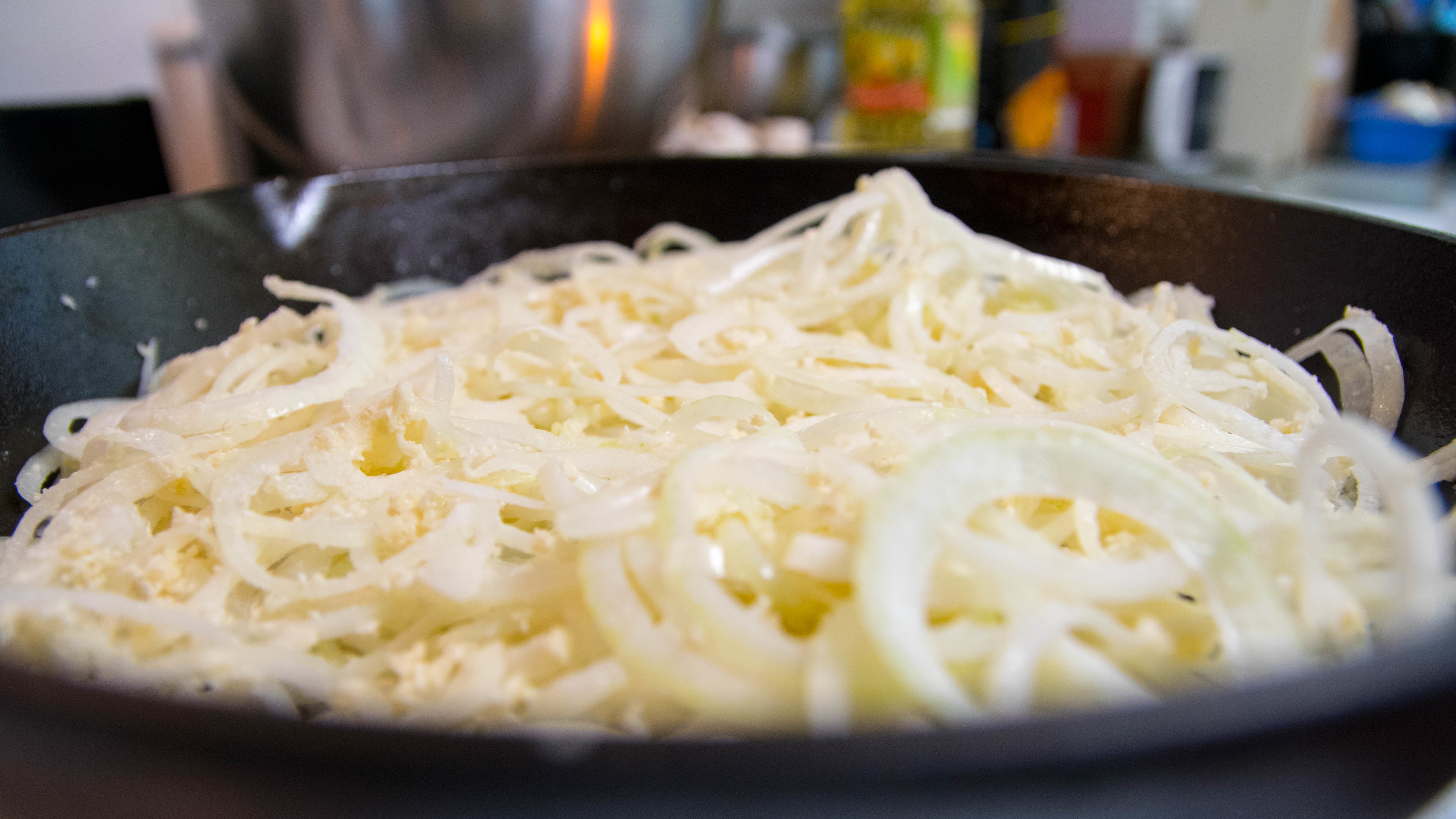 Combine the onions, flour, panko and salt in a large bowl and toss to combine. Place them in the pan and the pan on the grill. Once the lid is down, adjust to maintain 250°C for 30 minutes or until crisp, tossing two-three times during the cooking. I suggest that you remove the pan quickly from the grill to a nearby trivet and keeping the grill closed instead of leaving the lid open the entire time.

Heat loss isn’t so bad indoors, but it is a real threat to cooking outdoors. Once they’re finished, remove them from the grill and set aside. Clean out your pan and drop your grill temp to about 220°C. While the onions cook, use your downtime to prepare the beans and sauce. Bring 3.8L of water and two tablespoons of the salt to a boil, then add the beans, cooking for five minutes.

Remove to a bowl of ice water to stop them from cooking any further — blanching will prevent them from being soggy bean tubes when all is said and done. 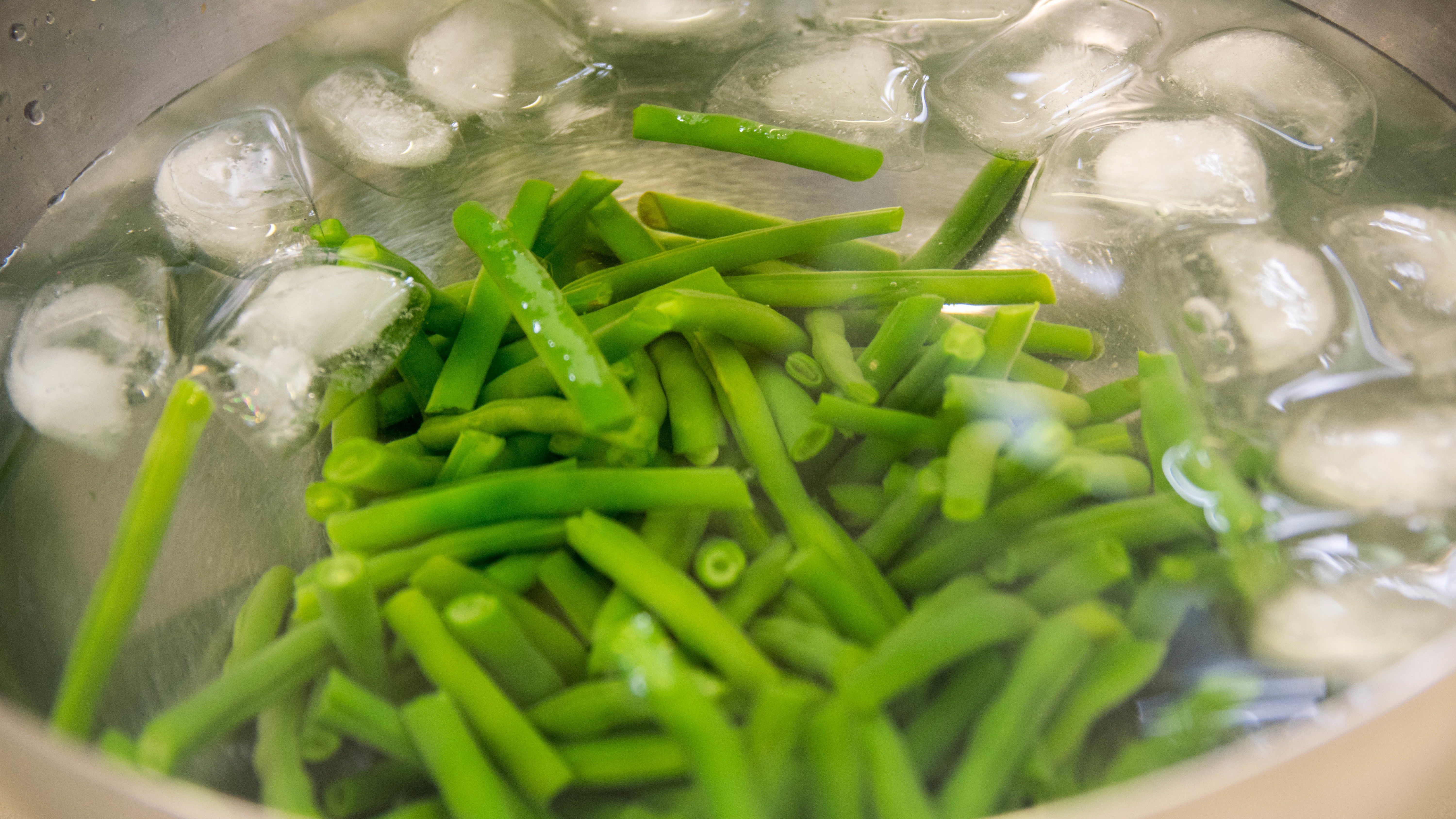 Grab that cast-iron pan from earlier and melt the butter in it over medium-high heat. Add the mushrooms, the remaining teaspoon of salt and pepper and stir occasionally until the mushrooms begin to release their liquid — about four-five minutes. Add the garlic and nutmeg, cooking for an additional one-two minutes. Sprinkle the flour over the mixture and stir it to coat, cooking for yet another minute, before adding the broth, stirring and cooking for another minute.

Drop the heat to medium-low and add the half-and-half. Cook until thickened, about six-eight minutes. Since the pan is now hotter than the fires of Mt. Doom, carefully remove it the from the heat and stir in 1/4 of the onions and all of the green beans. Top with the remaining onions that you definitely didn’t snack on and place the pan on the cool side of the grill.

Once it’s on, lower your burners to maintain a temperature closer to 200°C and “bake” until bubbly, about 15 minutes. Though you can serve it immediately, I suggest letting it rest for five-ten minutes, because I value the roof of my mouth. 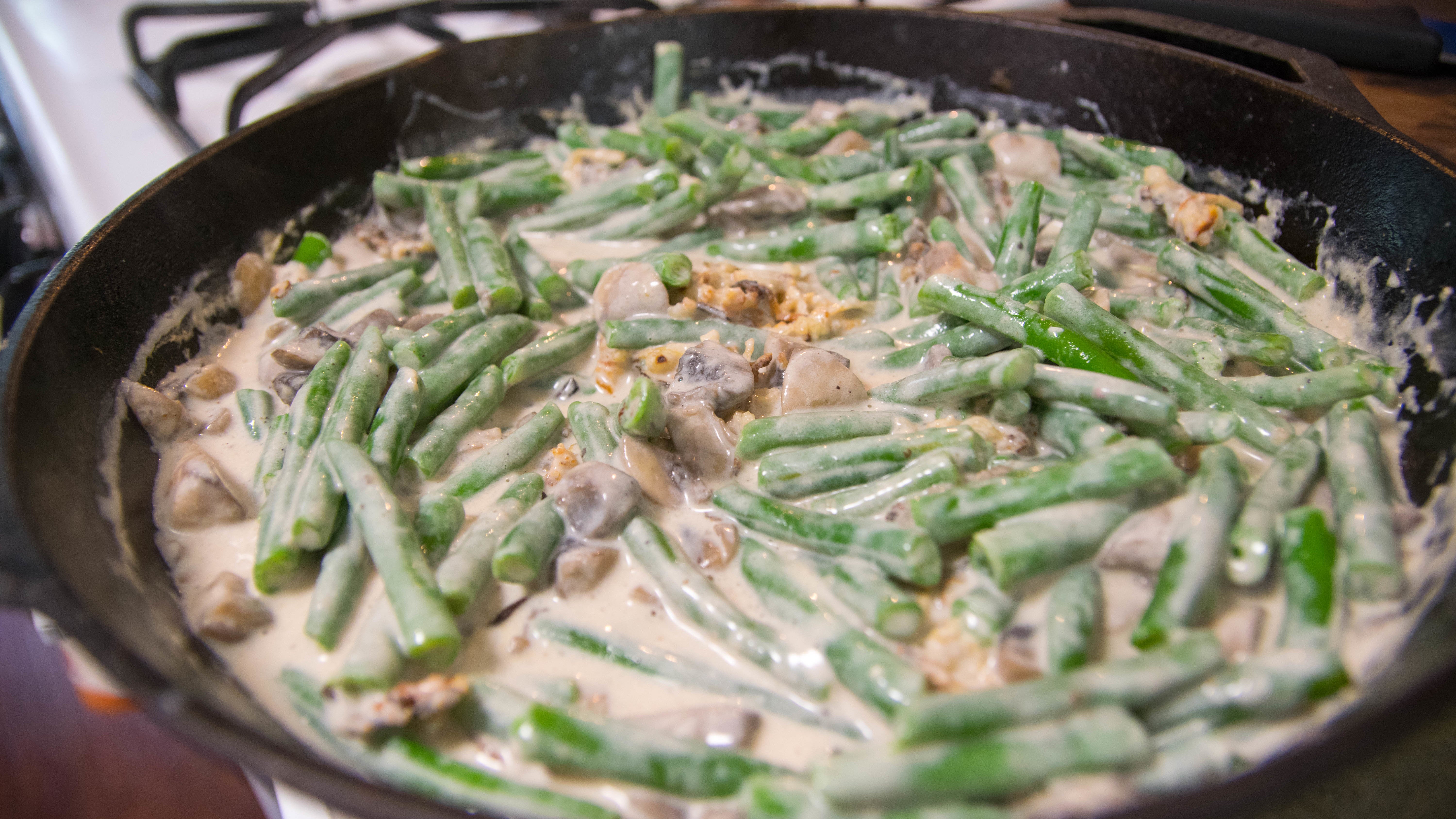 Now, there are some things to remember when oven grilling. First and foremost, temperature control is going to be much more involved than it would be with a thermostat controlled oven. Gas grill owners will find this method to be much easier than those with charcoal setups.

And although most modern grills come with a probe thermometer built into the lid, I still recommend owning one with an oven/grill clip just in case. My favourite model provides a timer, but more importantly allows you to set min/max temperature alarms, an incredibly useful feature for long, slow roasting. 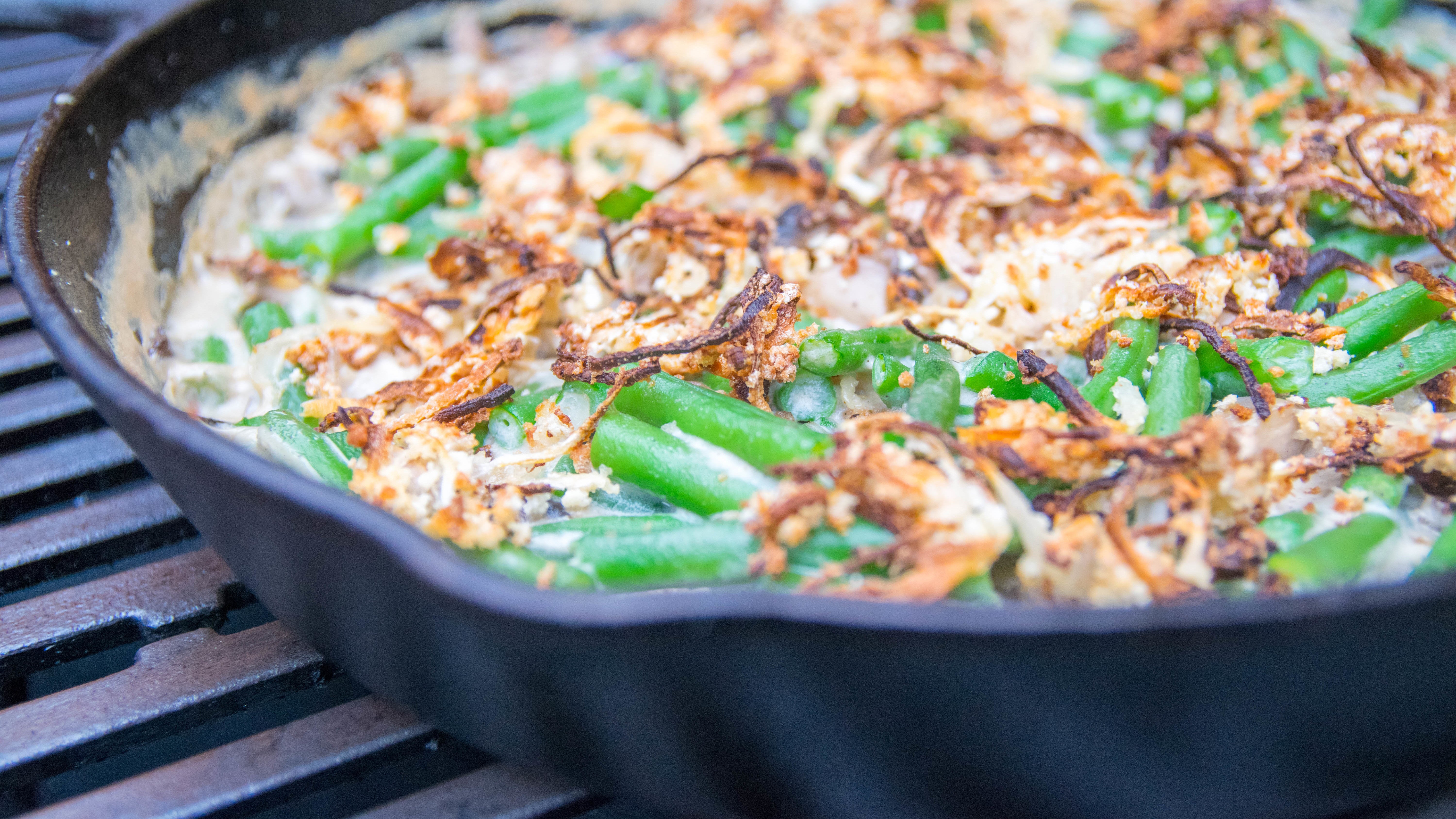 Also, many of these casserole-style dishes are traditionally cooked in glass or ceramic dishes — DO NOT use those on your grill, unless you hate both your grill and pan. Thermal expansion is a real thing and even indirect heat can be too intense for them. Stick to cast-iron or disposable aluminium pans.

Worth mentioning is the hideous phrase “turn off half of the burners”. Although I own a 2017 Weber, they have yet to debut a three-burner model that allow me to use only a portion of a single burner. Instead, use as many burners as you need to maintain the target temperature while keeping indirect heat.

Even still, some three burner grills won’t allow for much cook space and indirect cooking. In this case, place a piece of heavy duty aluminium foil under the pan to diffuse the heat. Cook time will vary slightly with this method, so be sure to use a thermometer to check for doneness when applicable.

Oven grilling is, hands down, a great way to showcase your own cooking ability and versatility to your guests.