The Rebel Whopper is Hungry Jack’s first stab at a plant-based burger for the Australian market. Made from a mixture of legumes and natural oils, it’s being billed as a cruelty-free alternative to traditional meat. But how does it taste?

We’re not precisely sure what the Rebel Whopper is rebelling against. Deforestation? The mass slaughter of cattle? Increased methane in the atmosphere? Whatever its beef is (ahem), the end result is a carnivore-friendly burger that avoids the usual ethical quandaries of meat production.

The Rebel Whopper’s patty is the brainchild of Australian food startup v2food in conjunction with CSIRO scientists. The “meat” is a mixture of legumes, sunflower and coconut oils and other plant materials with no genetically modified ingredients.

In addition to being more environmentally friendly, it also tastes just like a real Whopper – or so Hungry Jack’s marketing minions would have us believe.

There are many imitation meats on the Australian market and they all promise the same thing. More often than not, the taste profile is semi-passable at best. Can the Rebel Whopper really be any different?

But before we get into the meat of the review, let’s take a look at the burger’s nutritional value.

As we previously reported, the Rebel Whopper should not be mistaken for health food – or even a lighter burger option. It contains 2790 kj of energy, 38g of fat, 52.2g of carbs, 8.4g or sugar and a whopping 1150mg of sodium.

With the exception of the fat content, these are all higher amounts than what’s found in a regular Whopper. If you’re counting calories or are on a keto diet, the Rebel Whopper is actually a worse choice than the beef version.

With that said, nobody buys a Hungry Jack’s burger to be healthy. And it also has the whole saving-the-environment thing going for it. Now that’s out of the way, let’s dive into the actual taste test. 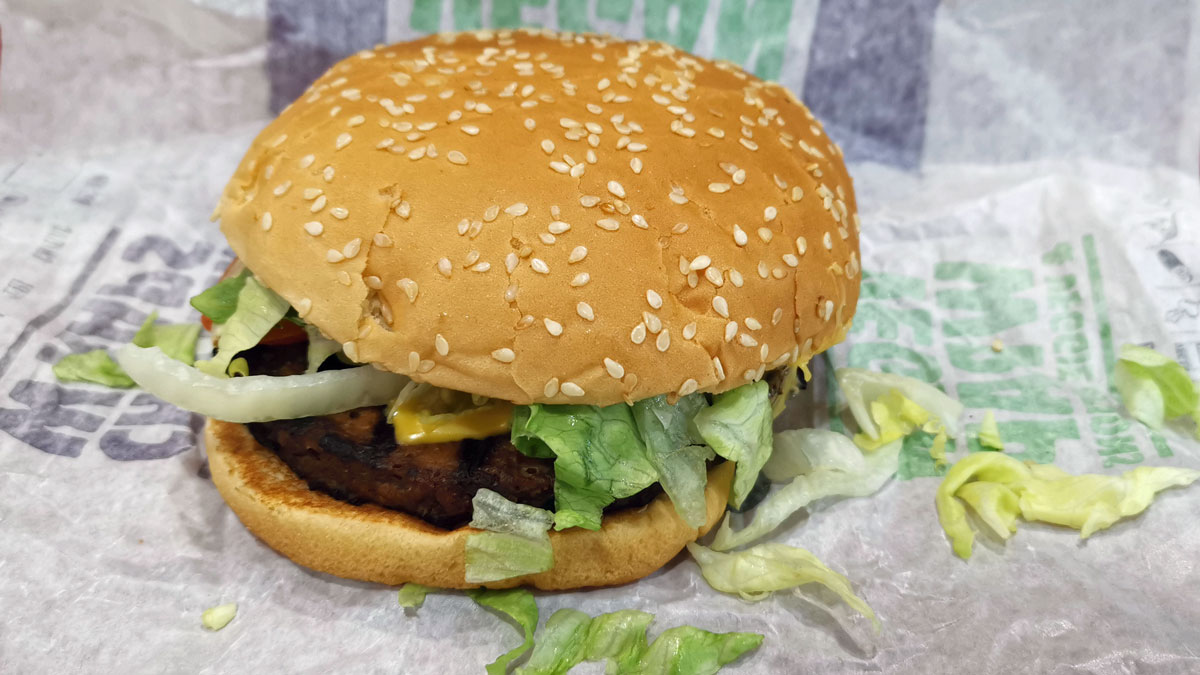 Visually, the Rebel Whopper is unmistakably a Hungry Jack’s burger. There’s nothing out of the ordinary about the patty’s appearance – it looks just like the beef version in shape, texture and colour. While we wouldn’t call it appetising, it’s no worse looking than your average fast food burger. So that’s a tick for appearance.

Here’s a closer look at the patty. As you can see, I ordered mine with an optional slice of cheese. (Note: The patties are cooked on the same grill as Hungry Jack’s meat products, so it’s not truly vegan even if you hold the mayo and avoid the cheese.) 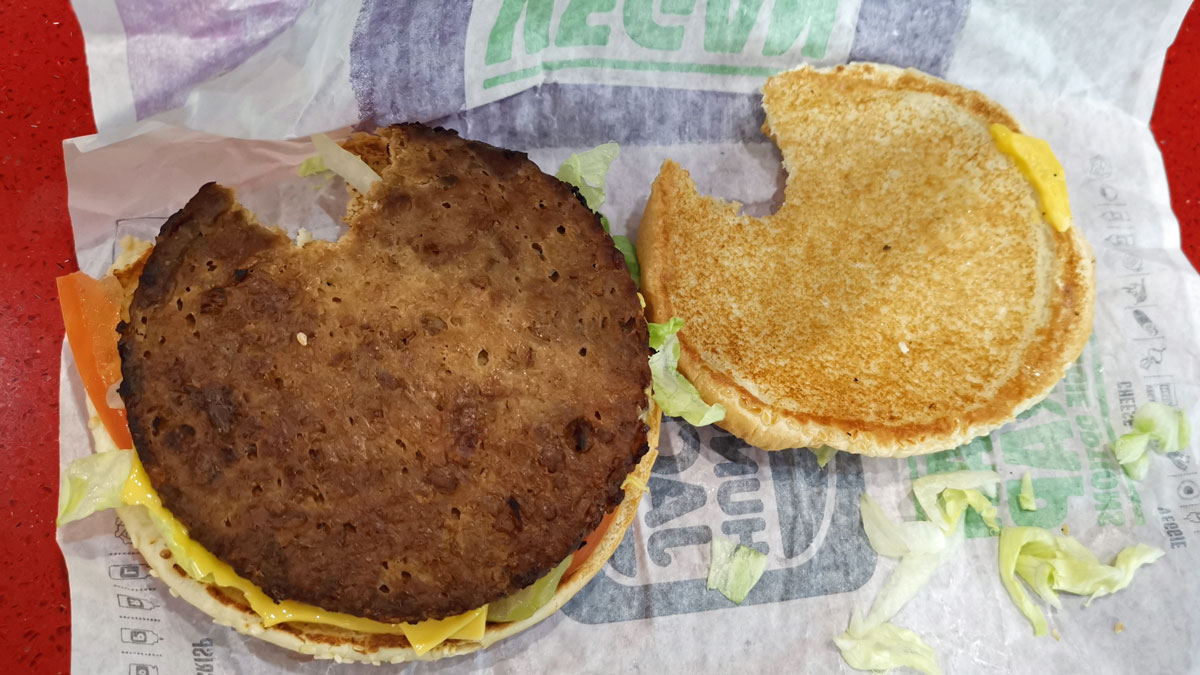 In terms of taste, the Rebel Whopper surprised me. The first bite was almost indistinguishable from a meat Whopper both in texture and flavour.

However, after a few more bites my taste buds began to detect some subtle differences. The smoky aftertaste is definitely more pronounced than a beef Whopper – presumably in a bid to mask the absence of ‘beefiness’.

I also tried a mouthful of the patty sans bread and condiments. On its own, the patty’s texture is definitely more fibrous and lacks the unmistakable ‘umami’ feel of real beef. But that’s to be expected. Considering it’s all plant, the resemblance remains uncanny.

All in all, this is a very passable Whopper imitation. If nobody told me I was eating a plant-based patty, I probably wouldn’t have picked up on the aforementioned differences.

In conclusion, the Rebel Whopper is an excellent alternative to meat-based burgers that should satisfy any Hungry Jack’s fan. It also won’t cost you anything extra, which is arguably the real miracle here. Would eat again. 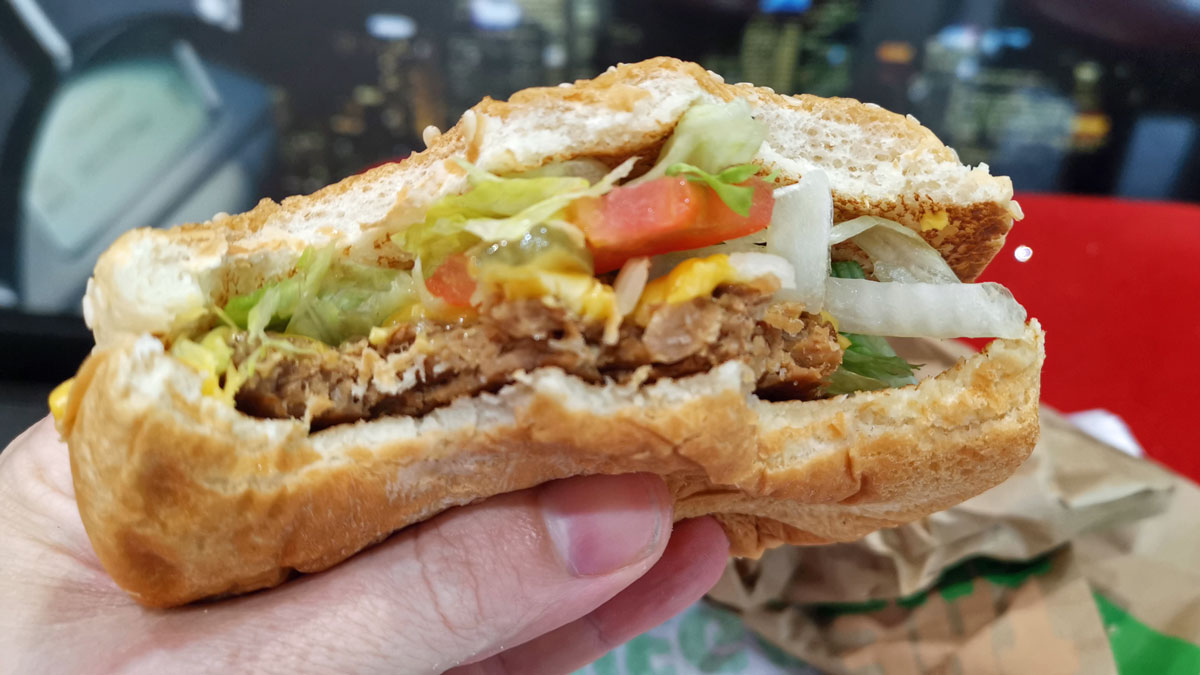 We Ate The 'Beyond Burger' - A Fake Meat That Actually Bleeds