First it was Hungry Jack’s. Then it was Domino’s and KFC. Now, the last of the great carnivore purveyors is finally welcoming vegos to its store.

All hail the McDonald’s McVeggie Deluxe! Or maybe kill it with fire. (Read our taste test to find out.)

What is the McVeggie Deluxe?

The McVeggie Deluxe is the first vegetable-based burger to earn a permanent slot on McDonald’s menu. This means you’ll be able to get your veggie fix all year round, from any Macca’s store nationwide.

Unlike Hungry Jack’s and its egghead pals at the CSIRO, McDonald’s hasn’t attempted to create a lab-grown meat substitute. Instead, it’s sticking to a traditional vegetable patty, reminiscent of ye olde bubble-and-squeak from 1970s UK kitchens.

The Rebel Whopper is Hungry Jack's first stab at a plant-based burger for the Australian market. Made from a mixture of legumes and natural oils, it's being billed as a cruelty-free alternative to traditional meat. But how does it taste?

The fried patty contains a potpourri of mashed potato, whole peas, corn kernels, shredded carrot and onion. As mentioned above, there’s no faux-bovine mirage here – you can clearly see the vegetables embedded in the patty, which resembles a potato fritter. 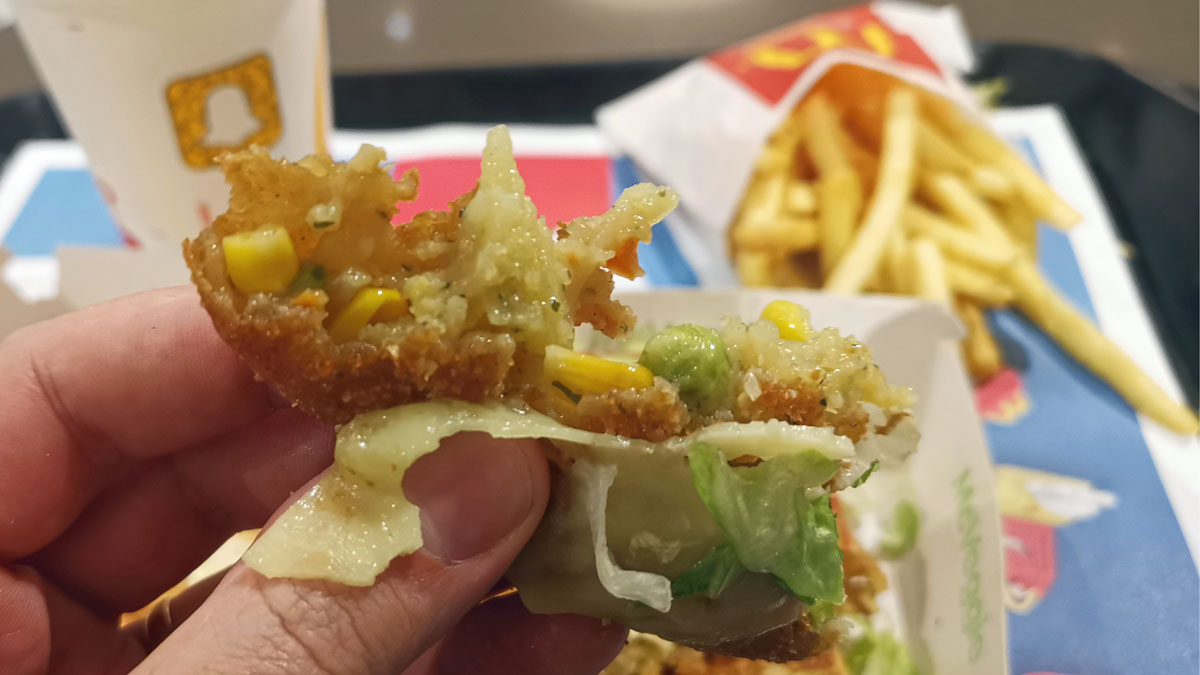 You can clearly see the vegetables inside the patty: a good sign. (Image: Lifehacker)

Lettuce, Jack cheese, tomato, pickles, Mayo/McChicken Sauce and a sesame seed bun completes the ensemble. (There’s also a non-Deluxe version, which dispenses with the cheese and tomato but is otherwise identical.)

A delicious build with jack cheese, tomato, fresh lettuce, and a golden, crunchy potato, cheese and veggie patty. Now there truly is something for everyone at Macca’s.

This compares favourably to most of McDonald’s meat-based burgers. For example, a Big Mac contains more kilojoules (2370kJ) and almost twice as much saturated fat (7.4g vs 11.8g).

With that said, 1190 milligrams is a hell of a lot of sodium, and those carbohydrates are nightmare fuel for keto dieters. In other words, the McVeggie Deluxe isn’t exactly good for you, but it is slightly healthier than a large meat burger.

Is the McVeggie burger vegetarian?

Before we move onto the taste test, it needs to be mentioned that the McVeggie Deluxe isn’t strictly vegetarian. (And it certainly isn’t vegan: as the futuristic cops in Scott Pilgrim might say, “mayonnaise contains oils and eggs, bitch.”)

Like Hungry Jack’s aforementioned Rebel Whopper, the McVeggie Deluxe is cooked on the same surface as meat-based products. This means you’re probably ingesting a bit of dead animal via the transfer of oils. If that contravenes your beliefs, steer clear.

For its part, McDonald’s makes no bones (ahem) about the McVeggie’s non-vegetarian status. It freely admits that the burger is aimed at omnivores who want to cut down on their meat intake.

“The McVeggie Burger is a vegetable based burger, perfect for those who want an alternative to traditional meat proteins,” Macca’s explained to us. “Although there is no meat-ingredients in the McVeggie, it is fried using the same equipment as the tempura coated McChicken patty, so is not strictly vegetarian.” 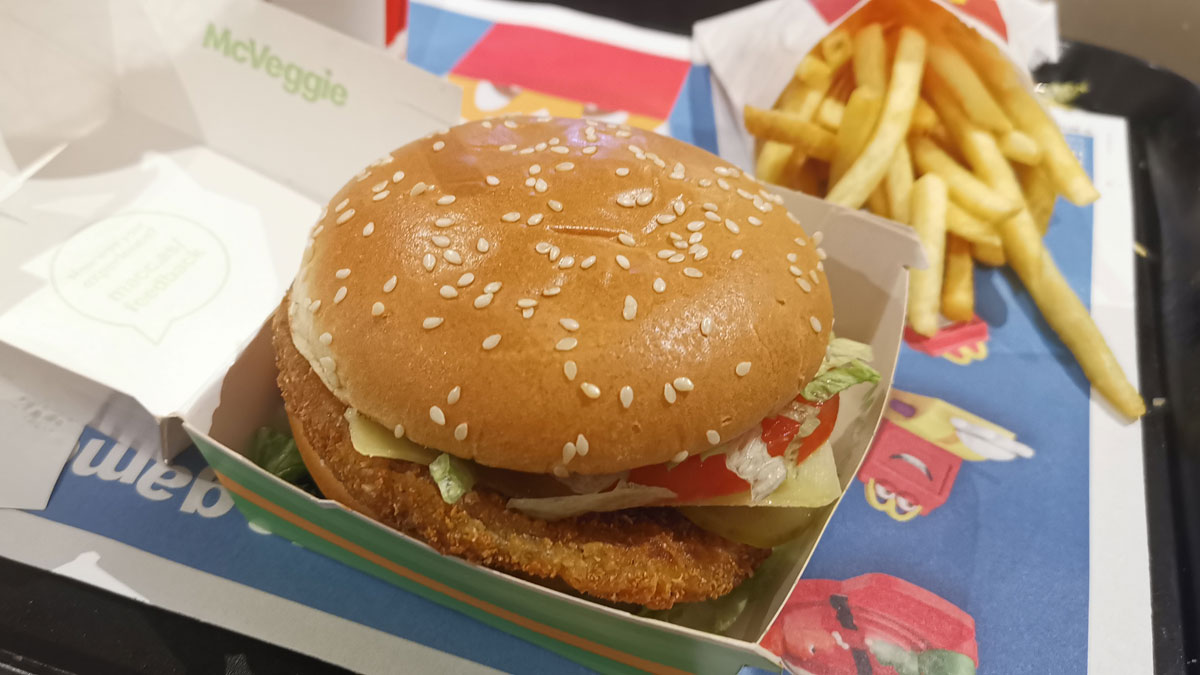 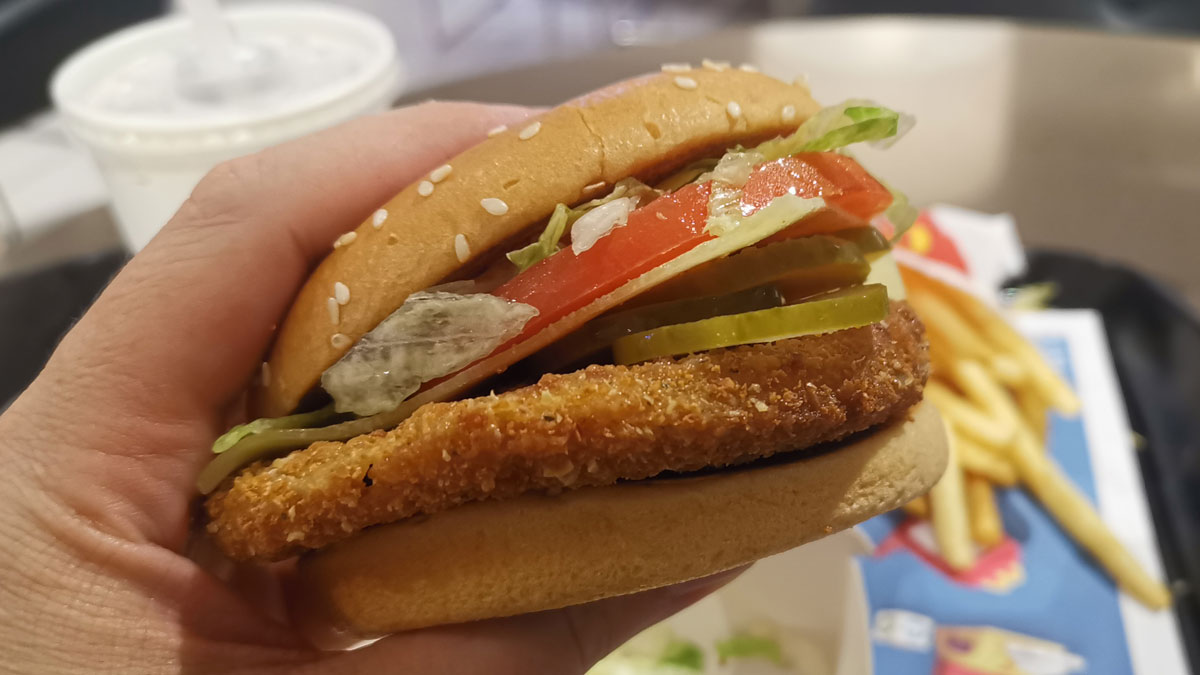 To be honest, I’m not particularly well suited to this taste test. As a hardcore meat eater, I can’t stand vegetable patties that masquerade as burgers. I abhor their very existence.

In short, they’re too dry and flavourless. To me, the buns and burger-like condiments create a glooming sense of loss, reminding me of what could’ve been, if only I’d chosen the beef version.

If given the choice between eating a veggie burger, or having the roof of my mouth aggressively scrubbed with stinky tofu, I’d probably opt for the tofu.

Taiwan is perhaps most famous for the sprawling street markets that spring up on sidewalks and alleyways at night. Among the myriad clothing, trinkets and electronics on display are specialty food stalls hawking all manner of exotic dishes. If you want to find out what snake's blood, sea snails, chicken butts and deer penis tastes like, this is the place to be! Guiding your stomach through these culinary corridors can be a daunting task though. Here are six food stall tips that will keep you sated and alive.

At least, that’s what I used to think before trying McDonald’s McVeggie burger. Now? I think they’re okay.

While the McVeggie’s patty didn’t turn me into a born-again veg head, I was surprised by the amount of flavour McDonald’s managed to pack in. The inclusion of whole veggies and piping-hot oil resulted in a pleasantly moist patty, despite the crispy outside. (The tomato and sauce helps on that front too.)

I was also a fan of the Jack cheese which has a nuttier, milder flavour than the bright yellow stuff that McDonald’s normally uses. It complimented the veggie patty really well.

If I wasn’t a horrible person and cared more about the welfare of cattle, I’d definitely order the McVeggie Deluxe again. Give it a try.