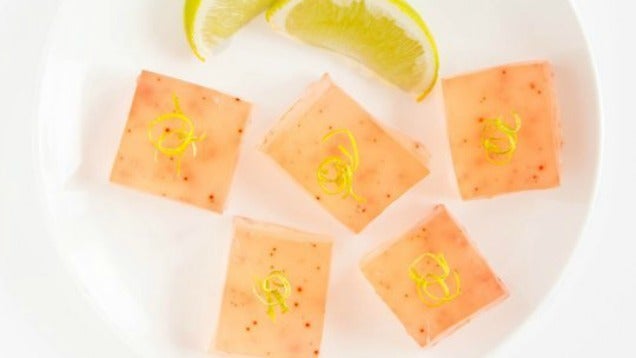 Gelatinised alcohol has been around for a while, but most iterations tend to be violently coloured, super sweet and just not that good. These cocktail versions from The Kitchn are something truly special and — dare I say? — grownup? There are five different recipes (click the link below for details), but the basic formula is the same for each. You'll need a non-alcoholic liquid, booze, and gelatin (two packets, always). The exact amounts of liquid vary from recipe to recipe, but you're generally aiming for a cup of non-alcoholic liquid (like juice) and 1/4- 1 cup of booze, depending on the potency.

Combine the non-alcoholic liquid with 1/2 a cup of water, sprinkle the gelatin over the mixture and let it soften for five minutes. (The gelatin will start to look wrinkly.) Warm the mixture over medium heat until the gelatin dissolves, taking care not to let it boil. Remove from heat and stir in the booze. Pour mixture into prepared mini muffin tins or silicon molds, and chill until set.

Once you get the hang of it, there's plenty of room to play around with different cocktail flavours. The Kitchn's Peach Bellini sounds pretty solid, but a French 75 or Elizabeth Taylor jelly shot sounds pretty swell too.