How to Jellify Your Favourite Beverages

I wish I had a noble reason for lying in bed and sampling jellified beer from a cocktail glass on a Friday morning — but the actual explanation is, well, anime. Anime has served as my and my spouse’s pandemic hobby, and we have watched at least two dozen series in the past year. We recently finished The Disastrous Life of Saiki K., a show about an all-powerful high school psychic desperately trying (and failing) to be mediocre. The titular character has a soft spot for dessert — specifically coffee jelly, a gelatinised coffee dessert. Gelatin has always grossed me out a little, and I’ve only made Jell-O once or twice before, but I wanted to try coffee jelly myself.

What started as an earnest attempt to recreate this actually good dessert quickly devolved into a barely scientific mission to gelatinise whatever liquids I could think of. The results were always surprising, often palatable, and occasionally terrible, but I’ve gained the confidence to use gelatin when a recipe calls for it, at least.

Gelatin comes from collagen, a common protein with a wound triple-helix shape that helps give structure to connective tissue in animals. Heating up gelatin in water induces a hydrolysis reaction that breaks the proteins down into smaller pieces. If you mix a powder made from those pieces into solution with some sort of liquid, then heat the solution to activate it and allow it to cool, “the gelatin molecules wind back up and form this beautiful gel network” that encases the liquid, said E. Allen Foegeding, Emeritus Professor from the North Carolina State University department Food, Bioprocessing and Nutrition Sciences, who graciously offered explanations for my failures. (Scientists measure the strength of a gelatin’s network forming abilities with a measure called “bloom number,” named after scientist Oscar T. Bloom.)

Gelatin dishes date back to medieval Europe, reported Sarah Grey for Serious Eats, though back then, rendering the collagen from bones made them time-consuming to produce. Peter Cooper filed a patent to improve gelatin’s convenience in 1845, while the famous brand name Jell-O originates from a cough syrup maker’s 1897 patent, and — according to Julie Thompson for the Huffington Post — coffee jelly specifically appeared in a British cookbook as early as 1817. Today, the dish appears more frequently in Japan, where jelled liquids have a centuries-long history. Rather than using gelatin, these desserts incorporate agar, a substance derived from red algae that behaves similarly to gelatin. 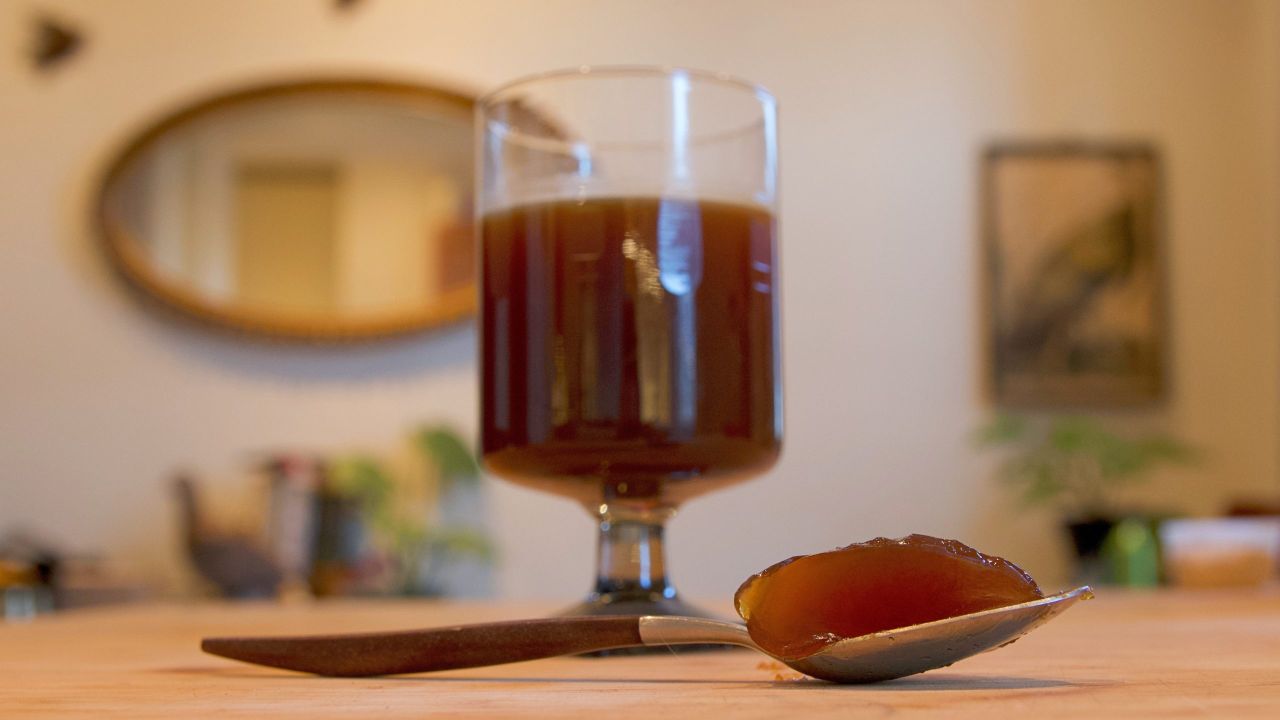 Recreating this coffee jelly was extremely easy; I followed this recipe from Allrecipes.com. I first “bloomed” the gelatin (no relation to Oscar T.) by dissolving a 10 gram sachet of Knox Unflavoured Gelatin in a little warm water, then mixed it with two cups of my favourite coffee and some sugar and brought it to a boil. I poured the mixture into individual serving-size cups and refrigerated it to let it set before serving it with whipped cream.

The result was a refreshing dessert with a softer texture than the Jell-O one might find at a diner, and a pleasant way to get my morning caffeine boost. I ate coffee jelly for breakfast for several days before realising that, if turning coffee into jelly was this easy, I could probably turn a lot of other liquids into jelly, too. I devised a list of the liquids I encounter most frequently — coffee, tea, soda, wine, beer, and miso soup — and decided to gel them all.

The London fog, my favourite tea drink and a mixture of Earl Grey tea, milk, and vanilla, served as the first gelled liquid I tried on my own. I prepared the ingredients using the ratios of the trusty coffee jelly recipe: two cups of London Fog, one sachet of gelatin powder, and three tablespoons of sugar. I made a huge mess — the protein molecules in milk acted as foaming agents, causing it to boil over the small pot I was using. I tried again, moving to a bigger pot. 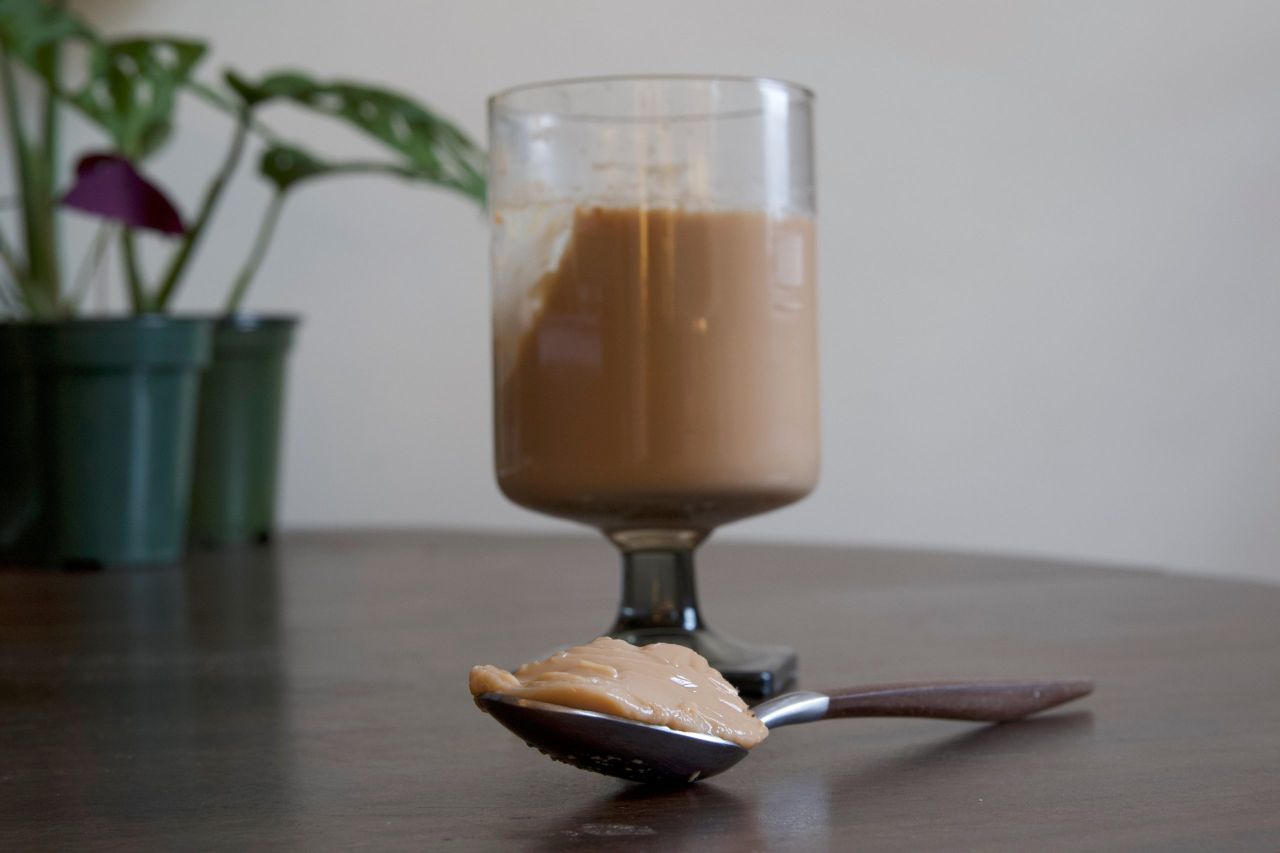 The results were…fine. A film of unappetising and somewhat rubbery milk fat formed at the surface of each serving dish. The texture was more or less the same as the coffee jelly, though perhaps a little more unctuous from the milk. It tasted like a London fog, but the sweetness felt overpowering — I’d forgotten about the lactose in the milk. I tossed the rest of the jiggling mixture into the trash after a few bites.

I tried Dr. Pepper jelly next, making a few tweaks from my prior test. I’d noticed that a lot of gelatin dessert recipes online called for one gelatin sachet per cup of liquid, rather than the one sachet per two cups ratio I’d been using. I also figured, after the London fog incident, that Dr. Pepper was sweet enough on its own so as not to require any extra sugar. Finally, I had seen that some recipes — specifically those geared toward children, used a microwave to heat the gelatin.

I prepared the solution of soda and gelatin, microwaved it in three one-minute increments (stirring between each), and then allowed the mixture to set. The result was…abhorrent.

By doubling the gelatin powder ratio, I’d created a stronger gelatin network — the Dr. Pepper had turned into a thick, jiggling block that felt tough to chew compared to the melt-in-your-mouth texture I’d enjoyed from the coffee jelly. Additionally, while advertised as “flavourless,” the higher ratio began to express a slightly meaty essence, akin to the aftertaste of pork rinds. Though it tasted sweet as a liquid, the mixture tasted barely sweet as a gelled solid, and the sugar of the Dr. Pepper wasn’t enough to mask the pigginess.

When I asked Foegeding over the phone why the Dr. Pepper gelatin didn’t taste sweet, he explained that creating a firmer gel decreased my perception of sweetness by decreasing the amount of contact that the gel made with the taste receptors on my tongue. Additionally, at least one study found that we seem to perceive firmer textures as having less flavour, regardless of the amount of food aroma molecules in our noses.

Luckily, these less than successful experiments had a bright side — I had established two principles I’d bring into the next round of jellies:

Feeling somewhat deflated after two failures, I had low expectations going into the wine jelly, and gagged thinking about the idea of beer jelly. But I pressed forward — one sachet of jelly to two cups of red wine. The wine tasted dry and I didn’t feel like thinking about the flavour chemistry of alcohol, so I went with three tablespoons of sugar. I liked the microwave method, so I went with that.

I’d hit the sweet spot, this time. The texture was ideal, and while the flavour bordered on that of Manischewitz, the wine’s own flavour shone through enough to make the experience enjoyable. I gave one of the cups to my neighbours, who finished and enjoyed it. I later learned that Thomas Jefferson wrote out a recipe to wine jelly of his own.

The beer was even more of a surprise; I scaled back the sugar to slightly more than two tablespoons, and the result tasted great, like something I’d happily eat while sitting on the beach. Granted, I had used a nice craft — a sour ale with guava — which did most of the lifting in terms of flavour. I don’t think I could stomach a Coors Light Jelly.

There are plenty of other considerations when it comes to making a jelly from your favourite beverage — too much alcohol and the gel network might not properly form. Foegeding reminded me in our conversation that certain fresh fruits like pineapple and kiwi have protease enzymes that break down protein molecules. These enzymes are great for tenderising meat, but will also inhibit the gelling properties of gelatin.

For the final step of the powdered gelatin journey, I attempt a savoury dish. I try not to eat meat (despite the powdered bone protein journey I was amid completing) so I went with this vegan sweet corn and miso aspic recipe, swapping gelatin for the recommended agar since I already had gelatin on hand. I noticed that this recipe used a sachet-per-cup of liquid ratio, which I figured was acceptable for a savoury dish.

This final recipe was my ultimate gelatin failure. I poured the gelatin sachet directly into boiling water rather than dissolving it in the liquid first. This set off a reaction that caused the gelatin to turn into hideous rubbery beige globs — by dumping the packet into heated water without dissolving it first, the gelatin network started forming without having trapped any water. It was “like nailing into a stack of 2x4s before lining them up to form the structure,” Foegeding told me. I restarted, dissolving the gelatin first this time, and then slowly pouring the miso soup and jelly mixture into cups full of corn and nori.

I’m pretty sure the result came out as it was supposed to, and I can’t pinpoint any specific complaints with it. It tasted like miso soup and corn, and the texture was clearly gelatin and corn. However, I could not take more than a full bite without gagging. Savoury gelatin dishes are not for me. [Editor’s note: Aspic can take some getting used to if you weren’t raised on it. — Claire Lower]

All of this gelling left me with a few general powdered gelatin tips for other novices hoping to gel beverages:

Gelatin is amazing from a chemistry perspective, and small changes to various components of your recipe or to the kind of gelatin you’re using can have big impacts on texture and mouthfeel. I certainly learned from my many failures as well, though I actually found the experience of seeing the proverbial sausage get made somewhat off-putting. There’s some overall lesson here — diving in deep on the science and history of an unfamiliar ingredient, running experiments, and recording where you messed up and why is a great way to grow as a home chef. But I also don’t plan on eating any more gelatin for a while.