15 Things You Never Thought to Make in a Rice Cooker

cookingfood
At Lifehacker, we independently select and write about stuff we love and think you'll like too. We have affiliate and advertising partnerships, which means we may collect a share of sales or other compensation from the links on this page. BTW - prices are accurate and items in stock at the time of posting.

Are you a rice-cooker obsessive yet? If not, you’re about to be. The kitchen appliance, though named for one particular food, is one of the most versatile tools you can get your hands on and it will change the way you prepare your meals (for the better). Everything becomes that little bit easier. Which is a dream for anyone with limited time.

If you think about it, the rice cooker works similarly in principle as the slow cooker (another versatile set-and-forget meal-making appliance): it uses moist heat over a period of time to cook food, trapping the flavours in the pot. Some rice cookers even have a “slow cook” setting, which means you can potentially replace your slow cooker with a rice cooker.

Even if you have the most basic rice cooker, one with just two settings — cook and warm, as Roger Ebert recommended — you can still “trick” your rice cooker to make more than just rice. Oh, and if you don’t have one yet, but are looking to invest so you can try out these ace recipes, check out our faves here.

Your rice cooker might not be the first thing that comes to mind when you want to make breakfast, but many breakfast foods can indeed be made in the rice cooker.

Boiled eggs: There are approximately a billion different techniques for producing the perfect and ultimate boiled egg. The rice cooker is another one.

Although I prefer using a pressure cooker, the rice cooker has similar benefits: cooking many eggs at once and producing easy-to-peel eggs. The rice cooker, admittedly, won’t save you any time over just doing it on the stove, but it’s pretty hands-off. Also, technically, the eggs aren’t boiled, they’re steamed, but eggs will come out like soft, medium hard-boiled eggs in the rice cooker.

Frittatas: Perhaps you prefer a frittata to boiled eggs? Pre-cook some vegetables or whatever ingredients you want in your frittata (you can microwave the veggies), then whisk some eggs right in the rice cooker bowl and add your ingredients to the egg mixture. Cook on the regular rice setting and when it’s done, you’ve got a quick breakfast (or dinner) for at least two people, depending on your rice cooker size. Here’s a recipe from Just Bento.

Porridge and other hot breakfast cereals: Yes, you can make porridge in a rice cooker. Let the oats soak overnight in the rice cooker, then turn it on in the morning for a hot breakfast in about half an hour (or set the timer, if available, for the porridge to be done when you drag yourself out of bed). Compared to a crock pot, the nonstick rice pot is easier to clean and you can make smaller amounts without worrying about the porridge crusting on the bottom. The Kitchn suggests using 1 cup of regular old-fashioned oats to 1 3/4 cups of liquid or 1 cup of steel-cut oats to 2 1/2 cups of liquid (water and milk, for example), then cooking it on the lower-temp porridge setting. (Sorry those of you who have the basic on/off rice cooker, this meal seems to require the porridge setting.)

Giant pancake: And then there’s the epic rice-cooker recipe for a pancake aka a giant pancake cake that’s fit for a big breakfast or dessert.

One of the best things about the rice cooker is that you can mix in ingredients for a one-pot meal and basically walk away.

Steamed meats and vegetables: While you cook your rice, why not steam vegetables and meats at the same time? As a bonus, the meats/vegetables enhance the flavour of the rice or you could use broth to cook the rice and up the flavour of the entire dish. Your rice cooker should have instructions for using the steaming tray (if it came with one), but here are approximate steaming times from Aroma Housewares: 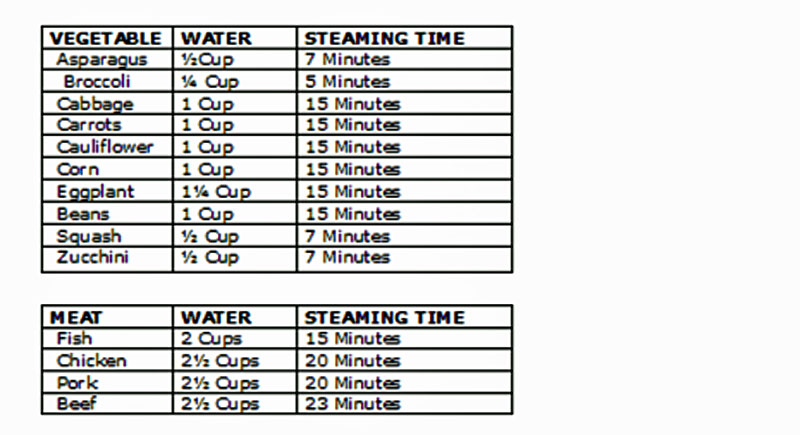 Start the rice first and then insert the steaming tray with your vegetables/meats towards the end of the cycle. You can even steam a whole fish in a steamer basket lined with vegetables for a full one-pot meal. Or try steaming fully cooked sausages on a bed of sauerkraut and potatoes (30-40 minutes cooking time).

Pork roast: In lieu of a slow cooker, Apartment Therapy experimented with using a rice cooker to slow cook a pork roast:

Our rice cooker has a few different settings, including one that will just keep the pot warm. This is the setting that you’ll leave your cooker on for most of the time. To start out, place your ingredients in the rice cooker. I placed a pork roast, onions, curry, soy sauce, chilli sauce, lemon juice, garlic, and a few other spices including coriander. I usually guestimate the proportions.

After the normal rice-cooking setting cycle, change to the warming setting and leave for an hour. You can cook just about any meat in the rice cooker this way, even an entire chicken.

Mac and cheese: Creamy mac and cheese with minimal effort or stove-watching. Endless adaptability and easy cleanup. The rice cooker is the ideal vehicle for homemade mac and cheese. By the way, you can cook other pastas in the rice cooker, either plain pasta or an entire pasta and meat sauce meal or Cubano casserole (pictured above).

Beans: You’ll still need to soak your beans, and cooking time ranges between 30 minutes to 4 hours (soybeans take the longest), but with a rice cooker you don’t have to watch over a pot for cooking lentils, soybeans, kidney beans, soybeans and other beans. If your rice cooker has a timer, you can soak the beans and set it to start cooking for when you want the beans to be done. See this cooking time chart from The Ultimate Rice Cooker Cookbook, a book I highly recommend to every rice cooker owner.

Soups, stews and chillis: Basically, just throw everything into the pot and see what happens. As Roger Ebert advises:

Let’s make some soup. Assemble your ingredients. Throw them in the pot. Add enough water to make it soup. I have been known to start with a can of Health Valley or Pritkin soup and add fresh ingredients. I have also been known to start with Health Valley chilli and add ground beef, spices, and a small chopped onion late in the day, Slam down the lid. This watched Pot boils. Click to Warm when the soup looks about right. If it looks undercooked, add a little more water and keep going. You will also learn to add the ingredients in a mixture in the reverse order of how long you think they will take to cook. For example, dried beans first. Even let them sit in water and Warm for a while. If you’re in a hurry, throw them in and boil them. The hell with them. Never put in meat and chicken so soon it will overcook. There are no rules. You are Aunt Mary. The last ingredients into the Pot should be the things you like still a little crunchy, like frozen peas and corn.

Stews. Like soup only with less water, Albert Einstein.

Anything soup-, stew-, or chilli-like gets the same treatment. Just be careful the whole thing doesn’t overflow. Otherwise, have fun with it.

If you don’t want to turn on the oven and wait for it to heat up (or you perhaps live without a conventional oven), your rice cooker is your dessert-making friend.

Hommus: Homemade hommus is a treat and you can customise it to be as garlicky or mild as you want. The rice cooker takes care of cooking the chickpeas (it takes about half an hour) and then you can simply puree the chickpeas with your other hummus ingredients.

Poached/cooked fruit: Cook fruit in hot liquid to soak up the flavours and you’ve got poached fruit. Wine-poached pears, for example, poached pomegranate spiced pears, poached rhubarb and strawberries, homemade applesauce, and more can conveniently be made in your rice cooker.

Tapioca pudding: Many rice cookers (the fuzzy logic kind with many different settings) have a pudding setting. So why not use it to make tapioca pudding? In the rice cooker, you can use whole pearl tapioca (normally a time-consuming pain to make on the stove) and fold in fruit and other ingredients, such as coconut milk instead of regular milk. It’s as simple as can be in the rice cooker: put in your tapioca pearls, mix in the milk and other ingredients, and set it on the porridge cycle.

Cheesecake: The rice cooker can mimic the oven when it comes to baked goods. If you have a hankering for cheesecake, mix the ingredients (cream cheese, eggs, sugar, lemon juice, heavy cream, and flour) in the rice cooker bowl, switch on the normal rice cooking cycle, and when it’s done, you have perhaps the easiest way to make cheesecake.

Chocolate cake: Similarly, this rice cooker cake recipe, which requires no eggs or milk (so it’s fit for vegans and those with allergies) requires just mixing the ingredients in and waiting for about an hour.

Banana bread: “Bake” banana bread in the rice cooker in about an hour and a half. Mix the ingredients, lightly oil the pot, pour the batter in, and cook on the regular rice setting. You might need to run the cycle twice, World Island View‘s recipe suggests.

Rice is a grain, so it probably isn’t a huge surprise that you can cook all sorts of other grains in the rice cooker — quinoa, rice pilaf, risotto, polenta, couscous, and even a pseudo paella dish (just mix the sausage, chicken, and other ingredients in with the rice). You can even make a breakfast burrito in your rice cooker: cook rice, tomatoes, and peppers together and crack some eggs in when the rice is done, letting the eggs cook during the “keep warm” setting for ten minutes before scooping the whole thing into tortillas. But I bet most of us rice cooker owners aren’t using the machine to make more than just plain rice.

It will take some experimenting with the timing and settings to get a one-pot meal or different dish out of that rice cooker, but, chances are, you can probably cook anything your heart desires in it. Want even more ideas? Aroma Housewares has 275 different rice cooker recipes (that aren’t anything to do with making rice), including clam chowder, enchiladas and buffalo wings.

In the market for a rice cooker? Here are 8 of our faves.