cookingkitchenknifehackersaving moneyshopping
At Lifehacker, we independently select and write about stuff we love and think you'll like too. We have affiliate and advertising partnerships, which means we may collect a share of sales or other compensation from the links on this page. BTW - prices are accurate and items in stock at the time of posting.

It can be tempting to buy a knife set for yourself or for your mates as a cheeky housewarming gift, but I’m here to tell you, don’t do it. The money you spend on several subpar knives could be used to buy less knives of a much higher quality (ones that’ll actually last you well into the future, too). So, here’s the run-down on why you should steer clear and what you should consider instead.

READ MORE
KnifeHacker: How to Use a Whetstone to Keep Your Knives Sharp

When you’re first moving out on your own or setting up a kitchen, buying a set of knives can seem like a good idea. For a decent price, you can get a bunch of knives, a honing steel and a block to store them all in. Sounds good, right?

The problem with knife sets is that they’re almost universally terrible. We’ve touched on this a little bit before, but often manufacturers skimp on build quality, materials, size, and even blade geometry in order to produce a cheap product. They’re not designed to keep their edge in day-to-day use, to stand up to regular use or even sharpening, and dull knives can actually be a hazard.

The video above from the folks at America’s Test Kitchen actually puts several sets to the test, and it just reinforces the point.

READ MORE
KnifeHacker: These Global and Furi Knife Deals Are a Cut Above

Long story short, for the money you spend on a knife set from a department or big box store, you can easily buy two or three great, versatile knives that will stand the test of time and keep their edge. After all, you’ll have to keep replacing knife sets, so wouldn’t it be better to save money and get two or three amazing knives instead?

If you’re hoping to turn them into a gift, just grab a few of our suggestions below, then pack them along with something like a honing steel like this Wiltshire Stainless Steel model ($14.16) or this Victorinox sharpening steel ($39). A whetstone set is also a great gift option for keeping their blades sharp.

The “right” knives for your kitchen depends on the type of cooking you do, of course. However, there are a few multi-purpose knives that every home cook should have because they’re good at just about anything you throw at them. Here are the essentials:

Which one you get depends entirely on your kitchen working space and how comfortable you are with a large knife.

I prefer a 20cm knife unless I’m working with larger cuts of meat or thick-rinded vegetables, in which case the added length of the 25cm option can make a huge difference. You’ve heard us mention it before, but the Victorinox Fibrox 8″ ($80.50) is a knife that punches way above its weight here, and the 10″ Mercer Culinary ($27.38) is no slouch either.

Life without a bread knife sucks. They’re not just for cutting bread either, think cuts of fatty meat, tomatoes, peaches, or just about anything else that’s firm on the outside and soft on the inside.

You’ll want at least a 25cm blade with a little flexibility, as this America’s Test Kitchen review explains in detail. Again, the 10″ Victorinox Bread Knife ($48.83) was one of their favourite budget picks, delivering clean cuts with a long handle for easy grip. If you have cash, though, the Wustof 10″ Classic Bread Knife ($224.16) was their clear favourite.

Okay, so this is my personal choice because I prefer a Santoku handles over a chef’s knife for many tasks, like multipurpose slicing and for cutting vegetables. You may or may not agree, but I recommend Mercer Culinary’s 18cm Santoku knife ($65.66) as a good budget option.

These are your starters, but if you’d like to know more, check out Alton Brown’s Gear for Your Kitchen ($44.63).

The Knives You Don’t Need, But Will Eventually Want 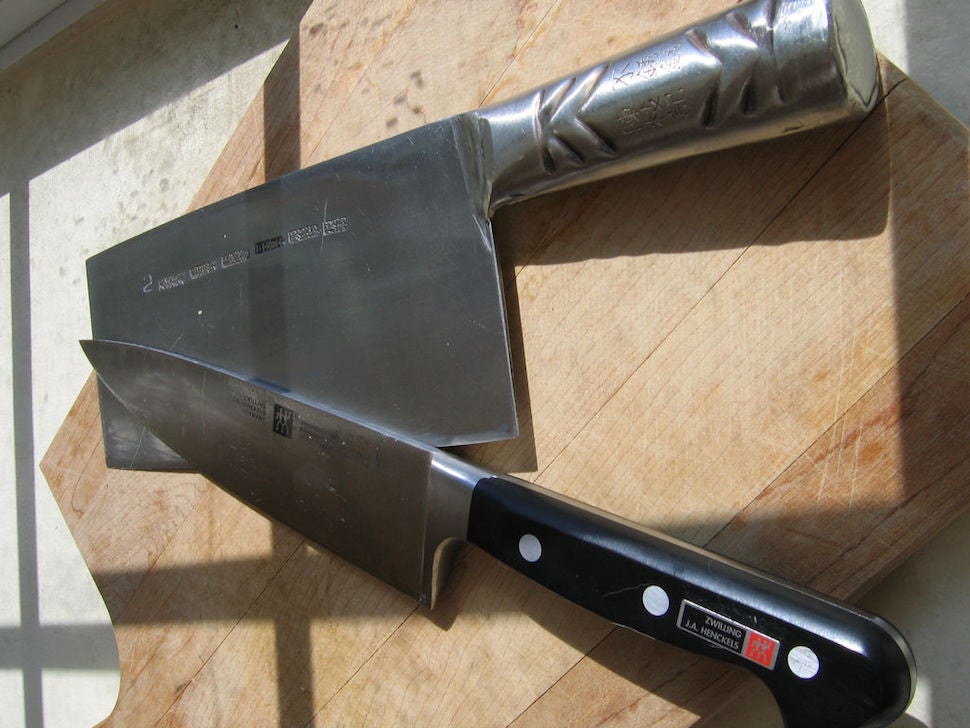 Once you have the knives above, here are some additional knives that you don’t need to have, but they’ll certainly make specific tasks much much easier:

A Carving or Slicing Knife

Don’t mistake this for a bread knife — a long, flexible, non-serrated blade like this Victorinox 10″ slicing knife ($218.91) can mean the difference between nice, even slices of ham, roast or corned beef or cake, and a hacked up mess. Basically, you’ll use it for anything you want nice, even slices from.

Lots of lists include the meat cleaver as an essential, and we can kind of understand why, but often times a Chef’s Knife will do instead. However, if you’re ready to expand your knife collection, you’ll love having a cleaver.

A Chinese cleaver can be the best of both worlds, designed for finely chopping vegetables like cabbages and carrots. You can also use it as an impromptu bench scraper, or for hammering through bones and joints of large cuts of meat. This Paudin 7″ cleaver ($39.99) is a good option for the more traditional cook.

A Fillet or Boning Knife

Once you get in the habit of filleting your own fish or cutting up your own chicken, you’ll probably eventually want one of these.

The super-thin, narrow and flexible blade makes it easy to slip in between bones and joints in a way you just can’t do with a chef’s knife. It’s also good for cutting off excess fat from large cuts of meat or trimming off thin skin from large fruits and veggies. America’s Test Kitchen and Cook’s Illustrated prefer the 6″ Victorinox Fibrox Boning Knife ($39.95).

A Pair of Kitchen Shears

There’s a strong case to be made that these should be on the essentials list. They’re a saviour when you’re parting out poultry, trimming or cutting stems.

Ideally, you’ll want a pair that is easily washed, comes apart into two pieces, and are easy to handle and grip even when your hands are messy. Henckels’ Take Apart Kitchen Shears ($35.72) are a good option, as are the Victorinox Swiss Classic Come Apart Kitchen Shears ($57.31). America’s Test Kitchen also recommends the Messermeister 8.5″ Take Apart Shears ($16.95) if you like the design and need more leverage (although lefties may not like them very much).

Look, I’ll admit if you go crazy and buy all of these options, you could potentially blow the budget, but we’ve given you plenty of wallet-friendly options, too. You’ll have the tools for whatever you want to cook, you’ll have saved a bunch of money, and most importantly, you’ll be safe in the kitchen.