10 Ways to Eat Cheap, Healthy, and Lazy, According to Reddit

When we last visited r/eatcheapandhealthy, we found a treasure trove of cold lunches that are full of veggies and protein and won’t break the bank. Today, we’re taking a look at their best tips for lazy meals, some just as simple as two or three ingredients. “I’m talking about LITERAL one-step (or two-step) meals a step above microwavable lean cuisine,” says the redditor who kicked off the thread, specifying that they aren’t looking for recipes that will leave them washing a slow cooker.

This is one of my favourites, too. The salad gives you plenty of veggies, and the rotisserie chicken adds flavour and protein. Both require very minimal prep, and the chicken leaves you with excellent leftovers.

This redditor’s one-pot pasta led to a thread of replies with variations. You can make your pasta, drain off most of the water, and stir in some pesto, parmesan, and spinach or cherry tomatoes. But you can also toss some frozen veggies in the pot while it’s boiling, or use hummus instead of pesto, or use gnocchi or tortellini as the pasta. Rotisserie chicken would go well in this, too, since you’ve got those leftovers.

Make a sweet potato into a meal

A sweet potato is a great start for a meal. This redditor piles beans, cheese, sour cream, spices, and chicken on top. Others chimed in to say Greek yogurt can sub for the sour cream (less fat, more protein), and that sweet potatoes are also great with bacon and blue cheese, or butter and five spice powder, or cumin and paprika.

Turn a cup of yogurt into a lazy parfait 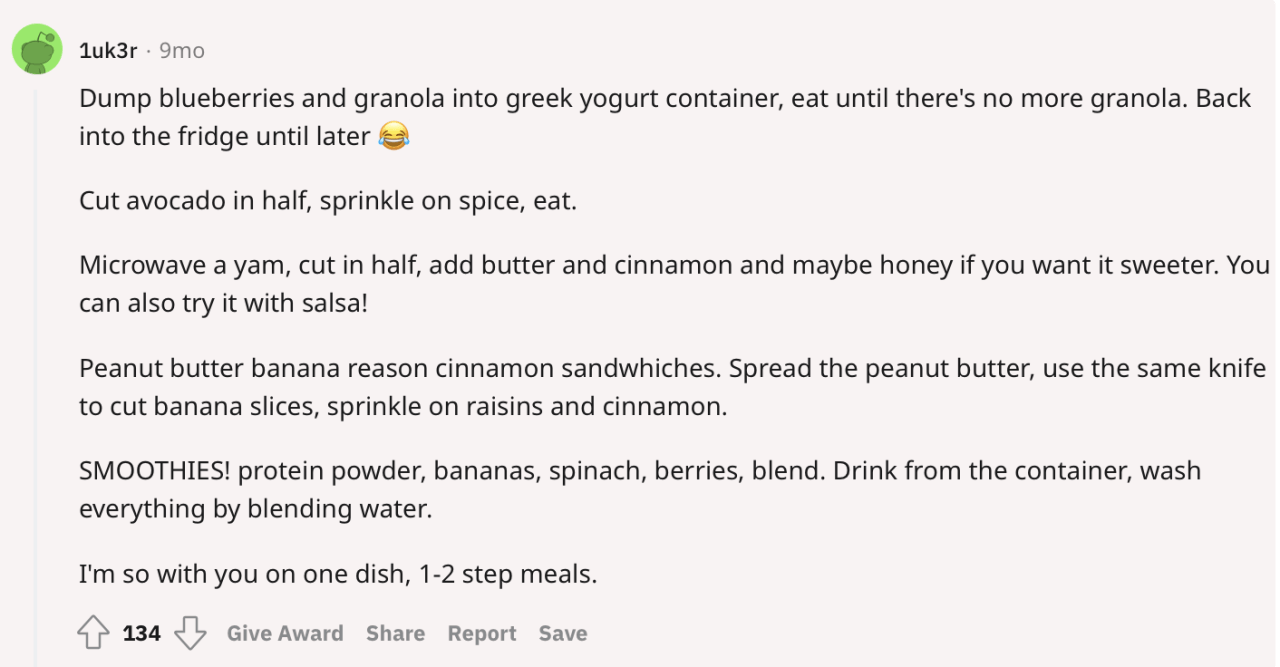 This move is genius: add granola and berries to a big container of yogurt, “eat until there’s no more granola,” and pop the rest of the yogurt in the fridge. You can also scoop it into a bowl like a normal person, if you want to be all fancy.

Throw all your ingredients on a sheet pan, and let the oven do the cooking. One redditor points out that their grocery store meat counter will season your meat and put it in an oven bag, which sounds like a hack to us. Salmon or chicken, plus the veggies of your choice, makes a solid meal with or without some extra starch like potatoes. Want more ideas? We’ve got tons of sheet pan meals for you.

Have a smoothie for dinner 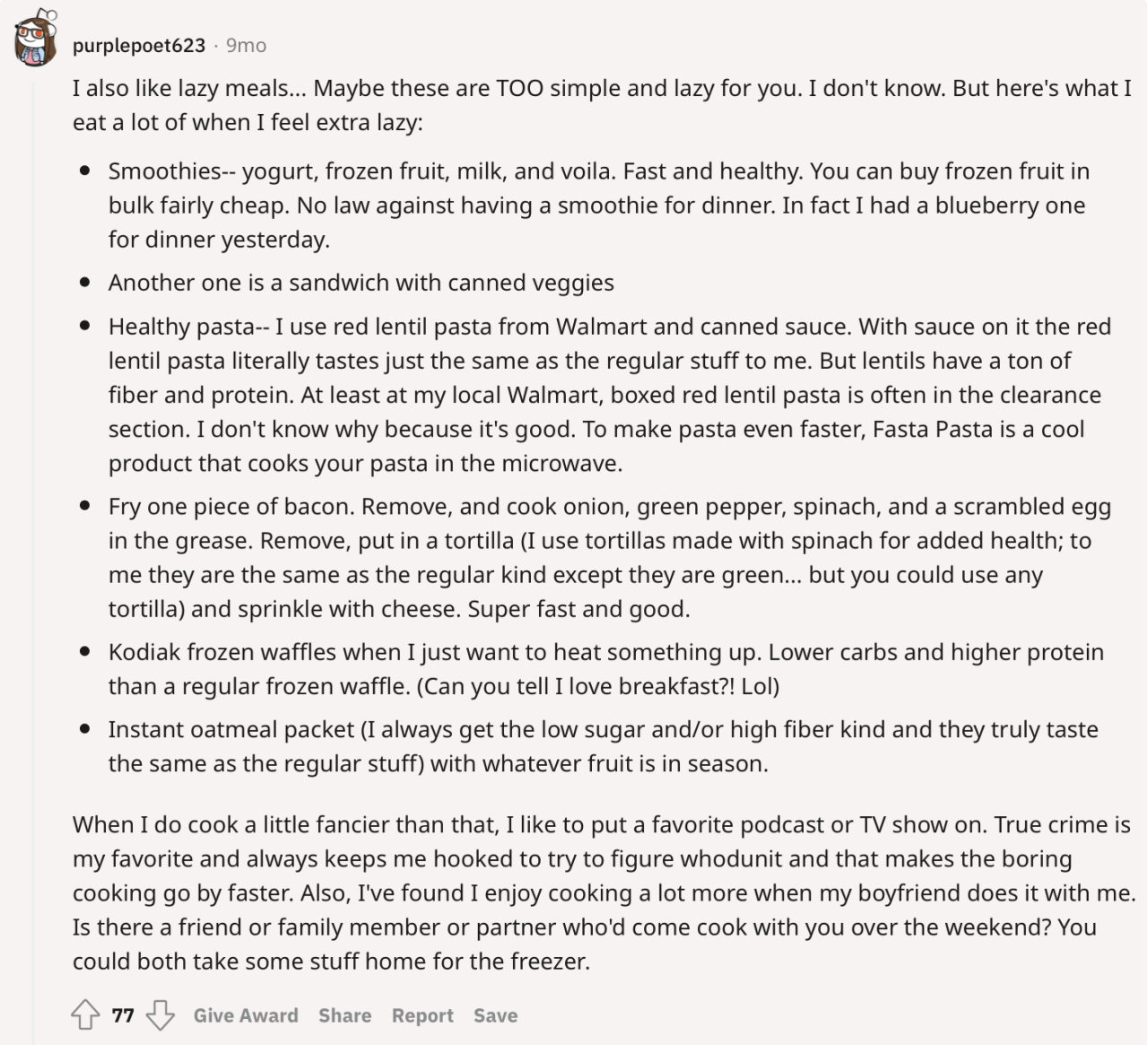 A ton of great tips in this reply, but the most important is the legal advice: There is no law against having a smoothie for dinner. If you like yogurt and fruit, dinner can be just a whirl in a blender away. Breakfast burritos, instant oatmeal, and protein waffles round out your breakfast-for-dinner options.

Make yourself a cheese board

As our food editor, Claire Lower, keeps reminding us, a mini charcuterie board is a fancy yet lazy meal option for any occasion. Start with cheeses and fruits, and round out the meal with whatever you feel it’s missing. You’ve basically reinvented lunchables. Dinnerables. In any case, there’s no prep, and you can just shove the leftovers back into the fridge when you’re done.

Put hummus on some toast

Hummus toast is warm, filling, and more delicious than it has any right to be. One redditor tops theirs with salad greens or seeds; another opts for a hard boiled egg and hot sauce.

Another grocery counter hack: Buy your meat and have the butcher cut it for you. Then you can season it and cook in the toaster oven (or Bake & Grill), and use pantry staples to make tacos. Best of all: next-day nachos.

Slow cook a meal…in a bag?!

I wasn’t expecting this one! It turns out there are slow cooker bags that make it so you don’t have to clean your slow cooker. And as the redditor points out, they allow you to make two recipes at once by putting both bags in the same pot. Make a chilli in one bag and a chicken stew in another, and you’ve prepped dinners for the week. Genius.