Moving into an apartment with no dishwasher has taught me the importance of using as few dishes as possible. Anything I can make in a single cooking vessel highly prized, but there’s more to one-pan cooking than dumping everything in a casserole dish.

Luckily, Cook’s Country’s One-Pan Wonders is a stunning collection of whole meals that can be prepared in a single frying pan, baking sheet, casserole dish or roasting pan. Beyond recipes, the book features a few words of wisdom on how to make one-pan meals that let the distinct flavours of the various ingredients shine through.

There’s a lot of good stuff in there, but two tips stuck out to me as truly helpful:

Once you have a handle on how to cook up a big ol’ pot of awesome, there is virtually no limit to the dishes you can create. Here are a few of my favourites to get you going. 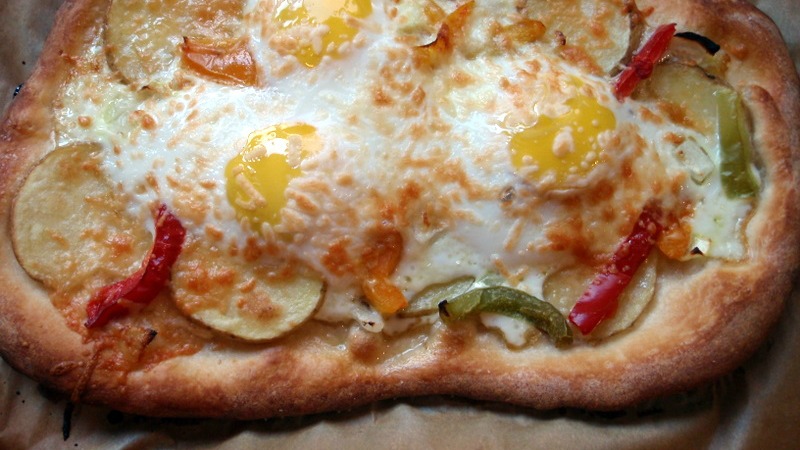 Usually, I think of breakfast as a bunch of separate components, such as poached eggs, fried bacon, and toast, but there a multitude of morning meals that can be assembled in a single cooking vessel.

Among some of the winners from One-Pan Wonders was a recipe for Spicy Prawn Skewers with Cheesy Grits. It’s not surprising that grits can be cooked in a single dish, but the prawns kind of threw me. Simply letting them simmer in a pool of grits and cheese won’t do, and the key getting perfectly cooked, not-soggy prawns lies in the clever use of skewers.

To begin, Cook’s Country combines grits, chicken broth, milk, scallion whites, and garlic in a prepared casserole dish, then covers and bakes it all at 175 degrees Celsius until the grits are tender (around an hour). Then, seasoned, deveined shrimp are threaded onto 12-inch skewers, alternating heads and tails, until each skewer has six to eight prawns. Once all the prawns are skewered, remove the grits from the oven, stir in the cheese (adding it earlier will result in a greasy, clumpy mess), and lay the skewers lengthwise across the casserole dish so the shrimp are suspended over their cheesey fate. Return to the oven for another 10 minutes or so, until the prawns are opaque.

Pizza is one of the ultimate one-pan meals, and there’s no reason dinner should have all the doughy fun. In my humble opinion, any pizza can be breakfast pizza as long as you crack an egg on there, and there are a couple of ways you can go about it. You can make a quick, super crispy with a tortilla and a cast iron pan, or you can use a traditional dough and a sheet pan.

For the tortilla pizza, heat a little oil in your frying pan until it starts to shimmer, then wipe it out with a paper towel. Place a flour tortilla in there and add your toppings. For breakfast pizza, I like a little ricotta or cottage cheese, some crumbled bacon or sausage, cheddar cheese and a whole egg, cracked right on top. (If you’re incorporating a breakfast meat, keep it all in one pan by cooking your bacon or sausage in the cast iron and using the resulting rendered fat in place of oil.) Place the whole thing under the broiler until the crust is crisp and the egg is set, about three to five minutes.

If you’re using traditional dough, bake some bacon in a sheet pan until crispy, set it aside, and drain the bacon grease off. Once the pan has cooled a bit, brush some of the bacon fat back on to coat, then press some pizza dough (store-bought or homemade) in the pan to cover the sheet. Bake the dough for about five minutes at 200 degrees, then top with your favourite breakfast pizza toppings, crowning your masterpiece with several whole eggs. Pop the whole thing back in the oven and bake until cheese is melted and eggs are set. Both tacos and fajitas have a lot of components, but that doesn’t mean those components can’t cook in one pan in harmony.

To make a whole pan a fajita-y goodness, you’re going to want to combine one pound of sliced chicken with three bell peppers (get one of each colour), an onion, and a whole bunch of tasty spices like cumin, chilli pepper, garlic powder and chilli flakes (see this recipe from Laughing Spatula for exact measurements). Toss it all together with a quarter cup of olive oil and cook in a 200-degree oven for half an hour or so, until the chicken is cooked through and the veggies are browned. Serve with your favourite fajita accoutrements, such as limes, cheese, sour cream, and fresh cilantro.

Tacos are even easier, and can be made with almost any protein, but something that can be seared quickly like flank steak or thinly-pounded chicken breasts work especially well. In terms of vegetables, Cook’s Country uses frozen corn in their recipe, but fresh is fine, and any vegetable that tastes good slightly undercooked (like onions and bell peppers) are also good candidates. Add some oil to a skillet and heat until it starts to smoke. Sear your meat on high and cook through, then tent with foil and set aside while your prepare the veggies.

Turn the heat down to medium and add a little more oil if your skillet is starting to look dry, making sure to leave all of those tasty, meaty brown bits in there. Add your vegetables of choice and saute until they are softened but have some colour on them. Remove them from the pan, and heat up a few tortillas using the last bit of oil. Wrap the warmed tortillas in a clean dish towel, slice your protein up nice and thin, and assemble it all into delicious tacos.

Complete Dinners That Are Real Winners

There’s something extremely comforting about a meal composed of a well-prepared protein and a few hearty, complimentary vegetables and starches, but not all “side” dishes have to be prepared “on the side.”

Chicken With Mushrooms and Kale

The above video can show you how to whip up this rustic and warm chicken dinner, but this meal owes its speedy cooking time to a little process known as butterflying. By removing the bird’s backbone and flattening it out, you get a chicken that cooks more quickly and evenly. Tasting Table coats theirs inside and out with a tasty mixture of porcini powder, cayenne, and salt and pepper, then sets it on a bed of sliced lemons and fresh herbs before surrounding it with over six cups of various mushrooms, garlic, and fresno chillis before popping it in the oven for half an hour at 250 degrees. A quarter cup of kale (tossed in olive oil) is then added to the mix, and the whole thing goes back in the oven for another five minutes.

A complete steak dinner may not seem achievable in a single sheet pan, but this recipe from Bobbi’s Kozy Kitchen shows you how to make a meal of steak, potatoes, and something green using a single sheet pan and a wire rack. As with so many of these one-pan wonders, the key lies in cooking in stages.

Click the link above for more detailed instructions, but you’ll want to start out by marinating a couple of flank steaks with a mixture of olive oil, balsamic vinegar, garlic, and salt and pepper. Chuck it all in a resealable plastic bag and let it hang out for an hour or so. While your meat is marinating, halve some tiny potatoes, toss them with some olive oil, and get them in the oven at 450℉ until the edges begin to brown. Add some chopped broccoli drizzled with a little more olive oil, place a wire rack over the vegetables, and lay the steaks on the rack. Return the pan to the oven, and cook until the internal temperature of the meat registers at 80 degrees on an instant read thermometer (about 30 minutes).

In terms of one-pot pastas, you really needn’t look further than the above iconic recipe from Martha Stewart. Let Queen Martha walk you through the whole process, but all you’ll need is some dried spaghetti, sliced onions, halved cherry tomatoes, garlic, basil, some olive oil, and basic seasonings like salt, pepper, and red chilli flakes. Add it all to a straight-sided saute pan and let simmer until the tomatoes have burst and the pasta is done. Top with freshly grated parm and enjoy.

If you want to make your one-dish pasta a little meatier, try America’s Test Kitchen’s Hands-Off Spaghetti and Meatballs, which uses a casserole dish rather than a pot or pan. Just break 340g of dried spaghetti noodles in half, place in a casserole dish, and toss with a jar of your favourite pasta sauce and two cups of water. Then, combine lean ground beef, ¾ cup panko bread crumbs, ⅓ cup prepared basil pesto, 1 teaspoon salt, and ¼ teaspoon pepper and roll into 1-inch meatballs. Scatter the meatballs on top of the spaghetti, cover tightly with foil, and bake for half an hour at 250 degrees. Remove foil and cook for another five minutes or so, until sauce has thickened. Serve with fresh basil. 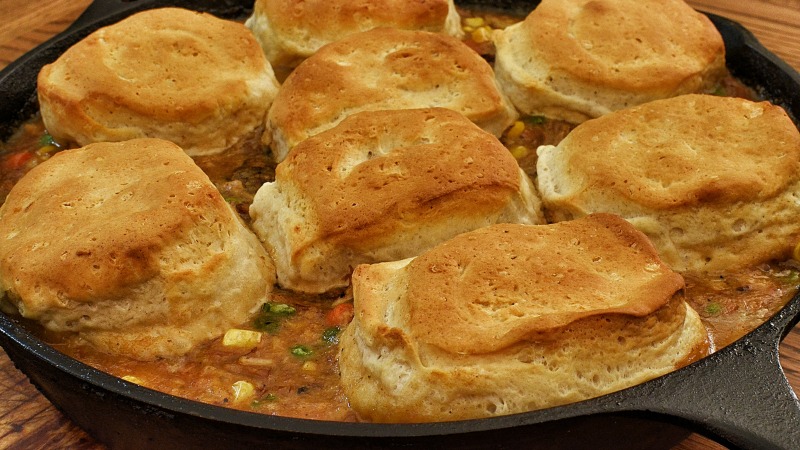 So okay, “pot pie” probably isn’t that surprising in terms of “things you can make in one pot,” but it’s a classic worth mentioning. There’s nothing wrong with a classic pastry crust, but I’m a big fan of a biscuit-topped version, like this one from Community Table. You can follow their recipe exactly, but once you’ve mastered the base, you can experiment with different vegetable combinations. To make a delicious foundation on which to build your pie, simply cook one pound of chicken (cut into bite-size pieces) with three tablespoons of butter in an oven-safe skillet until browned. Whisk in ¼ cup of flour and cook until golden, then gradually stir in three cups of chicken stock and cook until you have a nice, gravy-like sauce. Stir in your vegetables of choice — maybe a couple of ounces of Parmesan — and top with biscuits (either store-bought or homemade). Pop the whole thing in the oven at 200 degrees until the biscuits are golden brown and the filling is hot and bubbly.

After you’ve finished consuming your very satisfying, one-pan meal, it’s time to time to clean. Luckily, due to your very wise decision to choose something that can be prepared in a single pot or pan, this task is much less daunting than usual, and the person in charge of dishes will not only thank you for cooking, but for making their life that much easier.