How to Deal With a Toxic Boss

The term “toxic” has been thrown around a lot over the past few years — especially when it comes to the workplace. But as anyone who has ever worked for a truly toxic boss can tell you, the descriptor is about much more than incompetence, a poor managerial style, or irritating habits. Spending all-day-every-day as this person’s subordinate can seriously impact your mental health. A 2016 study from Stanford University even found that stress caused by mismanagement in the American workplace could be responsible for up to 120,000 deaths each year.

But bosses can be tricky. They did manage to reach their current position, which means at least presenting as an agreeable, reasonable person. In other words, their toxic tendencies are not always apparent in a job interview. (If they are, RUN.) So how can you identify a toxic boss? And if you realise you’re already working for one, how can you deal with it?

Interviewing for a new job is difficult, but you should pay attention to the way your future boss discusses the team and projects you’d be working on — not just so you have an idea of what you’ll do, but for what they think of your future team, and by...

How to spot a toxic boss

Part of the challenge of identifying toxic bosses is that they can usually blend in pretty easily. “Bad leaders are more similar to good leaders than they are different,” Dr. Barbara Kellerman, a lecturer at the Harvard Kennedy School of Government said in an interview with Resume.io. In general, both groups exhibit “intelligence, a high level of energy, a strong drive for power and achievement, decisiveness, and determination.”

In her book Bad Leadership: What It Is, How It Happens, Why It Matters, Kellerman identifies seven types of toxic leaders:

The Incompetent Boss is unable or unwilling to do their job well.

The Corrupt Boss steals or cheats to promote their own interests.

The Insular Boss is cliquish or unreachable.

The Evil Boss causes pain to further their sense of power and dominance.

Before you can pinpoint coping strategies, it’s a good idea to consider your boss’s leadership style. This flowchart from Resume.io will guide you through that process. 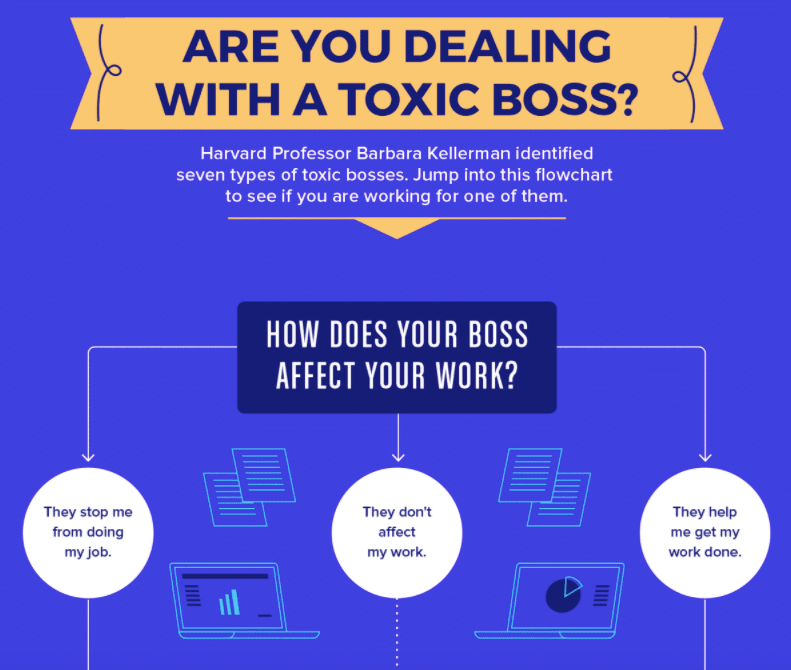 How to handle a toxic boss

If you’ve managed to identify the category your boss fits into (or at least narrowed it down to a few), here are some strategies to help you cope with each type of toxic leader, per Resume.io:

Bosses in this category tend to need a little assistance getting their work done. If you show some initiative and take something off their plate, it’ll make their life easier, while placing you in a position to lead a particular project, Amy Gallo writes in an article for the Harvard Business Review.

People hate losing out on things — apparently, more so than gaining something. So if you’re dealing with a boss who’s not budging, frame the change you hope to make in a way that’ll make your boss feel as though they’re losing out on something if they don’t make your suggested adjustment, management expert Dan Rockwell explains.

Reframe your current (not ideal) situation in a way that turns it into a learning opportunity. For example, if your boss raises their voice, take that as a chance to learn how to calm them down.

Not sure where to start? Ask for a one-on-one meeting so you have the chance to clearly communicate your challenges.

To Find Out if Your Potential Boss Will Be Any Good, Ask This Question

Job interviews are a delicate balance between selling yourself and your skills, while also evaluating the company and your potential new boss. As many people have found out, even if you land what you thought was your “dream job,” if you work for someone who turns out to be a...

Corruption calls for strength in numbers, Michael Skapinker writes for the Financial Times. He suggests finding co-workers that share your concerns and together, coming up with a plan to deal with the particular situation you’re facing.

According to Lisa Chase from Harvard Business School, employees working for this type of leader should guide the company towards working on their corporate social responsibilities, including charitable giving, volunteering, and advocating for policies that benefit the environment.

Every work situation is different, but if you’re able to take a stand — even a small one — this is the time to do it. The obvious place to start is to schedule a meeting with your HR rep and bring the issue to their attention.