When Is Ridesharing A Better Deal Than Owning A Car? 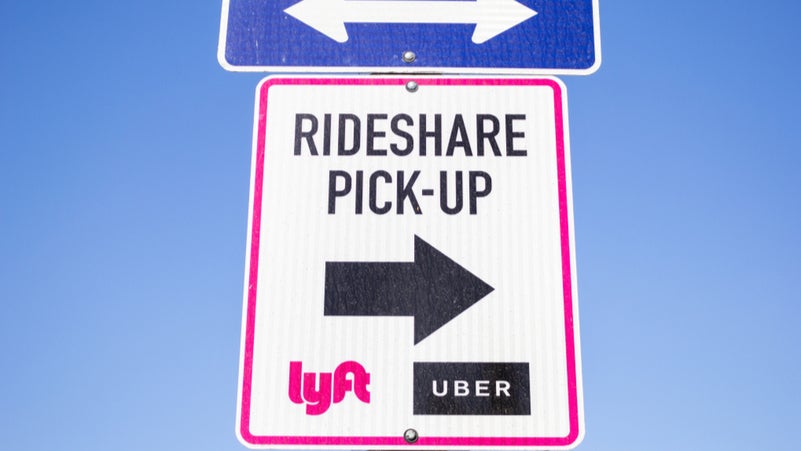 When I suddenly found myself without wheels this autumn after what I thought was just a fender bender, I spent a few weeks flip-flopping about whether or not I wanted to buy another car.

In fewer than three years, I had driven only about 19,300 kilometres. I worked at home. I could walk or bike to a grocery store. Did I really want to plunk down thousands of dollars for a big piece of metal and plastic that would spend most of its time in my driveway?

While I thought about it, I signed up for Lyft’s monthly membership service, dropped off my bike for a tune-up, and downloaded the mobile app to track my local bus route. But it all felt like a guessing game. I felt like there must be a magic number for when it made more sense to own a car versus cobbling together a collection of ridesharing, rental, and other transportation options for myself.

Spoiler alert: I bought a car, after the price on a used one I had been eyeing dropped so low I couldn’t pass it up. But after I signed the paperwork and got settled in with my new ride, I still continued to use my bike and request rides downtown; I even still rode the bus from time to time. So my questions lingered.

Going car free is about convenience, not just cost

The reason it’s so hard to determine the true cost of car ownership versus basically anything else is that it really doesn’t come down to cost. It’s about your location and access, said Richard Reina, product training director at automotive parts store CARiD.com.

If you live in an urban area with lots of options, from ridesharing to hourly car rentals to monthly ownership options on top of public transportation, cycling, scooters, that weird hoverboard with just one wheel—I could go on— you might choose some sort of mix-and-match solution that works for you.

But on the flip side of that access, you may not have anywhere to park a vehicle if you own one full- or part-time. Your decision depends in part on your financial means, but it also depends at least as much on your willingness to manage any number of transportation options in your never-ending quest for convenience.

Meanwhile, if you live in an area without public transportation, with irregular ridesharing service (or no service at all), or far from your workplace, it might come down to sheer necessity. If you want to get to work on time every day, you’ve got to have your own wheels, no matter how old or unfashionable.

And while it would be nice to be able to easily calculate your tipping point for giving up your car in exchange for some form of the sharing economy, for a lot of people, there just isn’t a clean-cut answer. “What price do you put on freedom and flexibility?” asked Greg McBride, chief financial analyst at Bankrate. “That’s the real advantage of having a car. No one ever thinks about how convenient it is to throw stuff in the trunk when you’re out running errands, until you don’t have a vehicle to do so.”

Don’t miss the budget forest for the car-ownership trees

A lot of personal finance resources will tell you that if you want to get out of debt, one of the ways to do it fast is to get rid of your second car—or go car-free altogether. But while it might provide a quick injection of cash into your budget, the odds are you won’t be able to get everywhere you want to go on a monthly bus pass and your own two feet. You will still have a transportation line item in your budget, even if it’s not filled up by a car payment and insurance coverage.

A recent survey by debt management app Tally found that 49% of Americans with debt wouldn’t give up their car for a year in exchange for having all their debt paid off. For Gen X and millennials, it’s the second highest non-negotiable expenditure (only cell phone service ranked higher). Meanwhile, only 12% of the respondents weren’t willing to give up their ride-sharing services like Uber or Lyft in order to become debt free.

I have been one of those people unwilling to give up the freedom of jumping in the car and just going. Twenty grand in student loans? No problem, I said as I signed off on the first car I bought when I moved from Washington, D.C. to Florida. Having a car was normal. I too would do the normal thing. Not because I didn’t want to save money to put toward my debt, but rather because being able to get around on my own terms felt like the most frugal way to do it.

Well, you can run the numbers

To find out if going car-free made sense for me, I compared the cost of using LyftPink for a month to what I spent each month for my last car. (I paid for my latest car outright, so the maths wouldn’t be as fair for that one).

When I had a monthly car payment, the minimum I could expect to pay each month was $US491 ($718). That included my minimum payment for my car loan, my insurance, petrol, a run through the car wash, maintenance, and my AAA membership.

Cheaper than owning my car, for sure. But I also spent cash (that I didn’t track) getting on the bus; if a friend took me on errands during my car-free period, I’d throw her a few bucks for petrol.

Other options I could have considered are ridesharing plus renting from a place like Enterprise or Hertz, which in the past in this area has cost me about $US150 ($219) for a three-day weekend. If a rental service were available in my area, I’d be looking at a cost of at least $US82 ($120) per day.

There’s also the newer concept of car-ownership subscription services to consider. They’re “a go-between for people who don’t want to own a car and the commitment that goes with that, but need more convenience than a ridesharing service can provide,” Reina explained.

You have to sign on for a minimum of 30 days before switching to a month-to-month subscription. Your payment includes your insurance, maintenance and repairs. All you pay extra for is filling the petrol tank. “It becomes potentially a viable option depending on where you live and how frequently you need a car,” Reina said.

But even that isn’t a perfect solution. “If you live in Manhattan, that’s not as attractive as an option” as it is if you live somewhere with ample parking, he admitted.

ZipCar even has its own version that offers unlimited access to a car Monday through Friday for commuting. If you drive 30km per day, your cost (including petrol, insurance, parking and maintenance) would be about $US700 ($1,024), according to the estimation tool on ZipCar’s website.

Reina said that looking at the upfront cost of at least $US400 ($585)-$US500 ($731) for services like ZipCar or monthly ownership subscription service FlexDrive can turn people off because it looks so expensive. It can seem ridiculous if you see ads to lease or buy a new car for $US200 ($292) per month.

But that’s not an apples-to-apples comparison, Reina pointed out. Beyond providing an all-in-one service for one price, the cost of insurance based on your age and location is also a factor. If you’re a driver in your 20s, for instance, you’re likely to pay significantly more for insurance coverage than someone in their 40s.

If you want to dig into your long-term car ownership costs versus ridesharing, check out online calculator Ride or Drive. You input your vehicle information, driving habits, and information for parking and other costs. (It also takes depreciation of your car’s value into account). Aside from the obvious expenses related to either one, this site factors in the value of your time. If you could work on your laptop or phone during your Uber or Lyft rides, getting that time back could be another factor that drives you to shift some, if not all of your transportation in that direction. 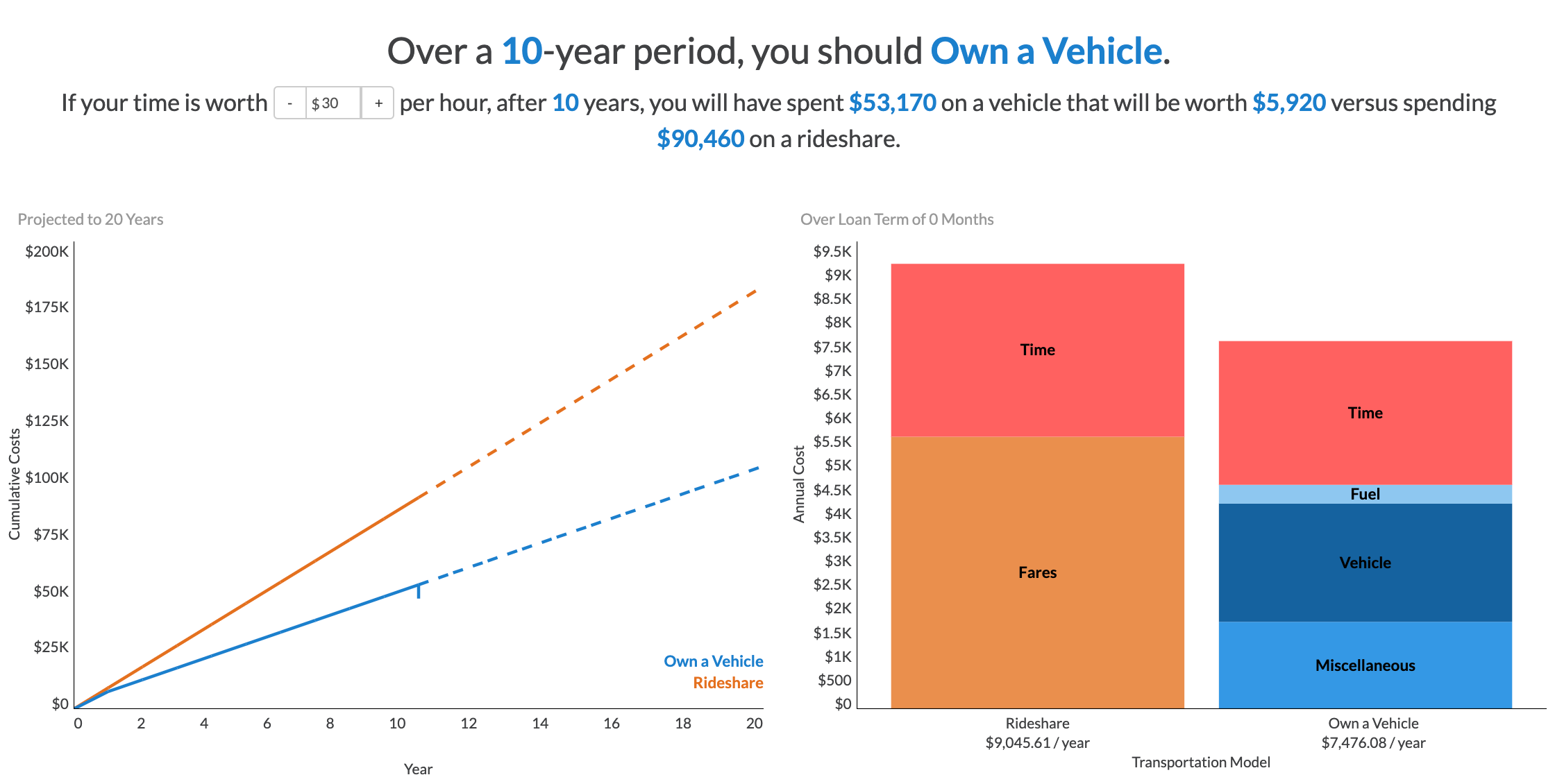 I plugged in my own circumstances, including my new car, and discovered that owning a car for 10 years would cost me a grand total of $US53,170 ($77,749), while ride sharing would cost me $US90,460 ($132,277) over that time. (And I get carsick, so working from the back seat of someone’s sedan isn’t exactly feasible for me.) It’s an estimate, for sure—it doesn’t consider the continued development of self-driving cars, for one—but it’s an option to get a broad view of your future if you completely switched in either direction.

But beyond the numbers, it almost comes down to how difficult or downright miserable your life would be without your own set of wheels. If you’ve gone car-free, how did you make your decision? What factors did you consider before making the switch? Let us know in the comments.