From FTTB To FTTC: Every NBN Technology Explained

The Liberal-National Party’s multi-technology mix took the original idea of the NBN and radically changed it. Instead of delivering a fibre optic connection to almost every home in the land, the decision was made to use existing copper and HFC networks to cover the last mile. But that’s left us with a network where not all NBN connections are the same. Here are the connectivity options that the NBN will deliver and how they differ.

The NBN’s multi-technology mix (MTM) uses a hodgepodge of fibre, copper, satellite, coaxial and other carrier technologies. Recently, Optus added to the potential confusion by suggesting 5G connections could also be part of the network, delivering “last mile” connections where other wired options aren’t viable either technically or economically.

Optus has launched Australia's first 5G home broadband network. If you're in a supported suburb, you can register your interest with Optus and potentially join the network right now. Here's how to get early access.

What is certain is that fibre optic cable will be part of the network. Where most connections vary is in how the NBN’s core network makes it’s way from a node on a nearby street or pole.

Fibre optic cable will still be part of the technology mix bringing data to your home or office. But it won’t be the only component.

Fibre to the Premises (FttP)

This is fibre all the way into your property. When the NBN was first proposed by the Labor government this is what we were all promised.

All the existing copper and coaxial cables that make up the existing phone network would be replaced by fibre optic. The idea being that it was unlikely that any foreseeable technology would travel faster than light and that upgrading the network would be less dependent on the cables coming into our homes and more dependent on the replacement of the gear at either end of the cable.

The image above was shared on the Facebook page Hills District Dads (HDD) Sydney under the caption 'Fibre aggregation node. NBN style.' Um. Just what the hell is going on?

If you think about ADSL – it uses the copper cables that were originally intended to only carry analog voice signals. But through some clever engineering, we were able to extract up to 22Mbps from those lines – assuming you lived next door to a phone exchange, the copper was in good condition and everything was perfect.

The hard data limit on fibre is hundreds of times faster than copper. And while the majority of NBN plans max out at 100Mbps, upgrading to something faster, when everything is run over fibre is about the equipment at either end of the fibre.

If you were one of the lucky few that received a FttP connection when the NBN was first rolling out – congratulations. You’re well equipped for life in the 21st century.

Fibre to the Node (FttN)

Read more
” excerpt=”Here’s an issue that likely wasn’t planned for when NBNCo started building their NBN nodes around Australia. Those big green boxes on the side of the road might be prone to flooding, rendering them useless, or they might even be taken out by a vehicle. So what happens when a car hits an NBN node?”]

Performance over FttN will depend on the quality of the cabling leading from the node to your premises.

In late 2017, NBN Co announced a delay in the rollout of the NBN to homes with HFC so that defects with the cable could be identified and remediated before the NBN trucks and techs arrived to do the installation. 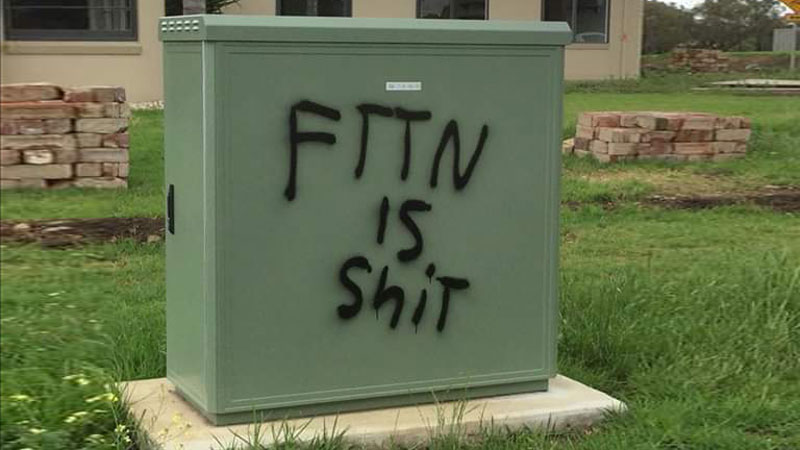 Now that those works are well progressed, the deployment of NBN equipment in those areas is moving forward.

Fibre to the Basement (FttB)

Depending on when the building was constructed and the builder, that could be fibre optic, Ethernet or copper.

Fibre to the Curb (FttC) or Distruibution Point (FttDP)

The NBN’s fibre is drawn to a communications pit as close as possible to your home. The last few metres is then carried to your house over copper. Think of it as being similar to FttN but the node is really close to your house and you don’t share the node with your neighbours.

Nobody’s plan for the NBN included pulling fibre thousands of kilometres to remote locations. For those customers, the plan was always to use some sort of satellite system. SykMuster is NBN Co’s satellite service. It works but latency is an issue. Whenever you make a request for some data over satellite, you’ve got to wait for the signal to go all the way up to the Sky Muster satellites and then back down to the receiving station. That takes time.

On the other hand, it’s less expensive than 4G services and offers more traffic. So, the performance hit has to weighed against the cost.

While 5G promises great speeds, there’s little doubt that carriers will continue to charge a premium for fast, wireless internet delivered over the cellular data network.

But Optus recently suggested an interesting alternative. Rather than relying on copper or HFC to deliver the last mile, they suggest that 5G could plug the gap between a nearby node and your home.

The idea has merit and is worth considering. But those who say wireless internet is the future, should remember that wireless cell towers need some way to connect to core networks. And the best engineers in the world still haven’t found a way to do that better than with fibre optic cables.

Unfortunately, when it comes to NBN technologies, you’re pretty much restricted to whatever NBN Co is rolling out in your area. You can find out what your suburb is getting via the NBN ‘Check Your Address’ tool. This also gives you an estimated timeframe for completion if construction hasn’t been completed yet.

While it’s not possible to choose the technology being deployed, you can choose a plan with higher-than-average download speeds. Here are some of the best options for the NBN 50 and NBN 100 speed tiers: