Should You Make That Viral Meat Stick Contraption? 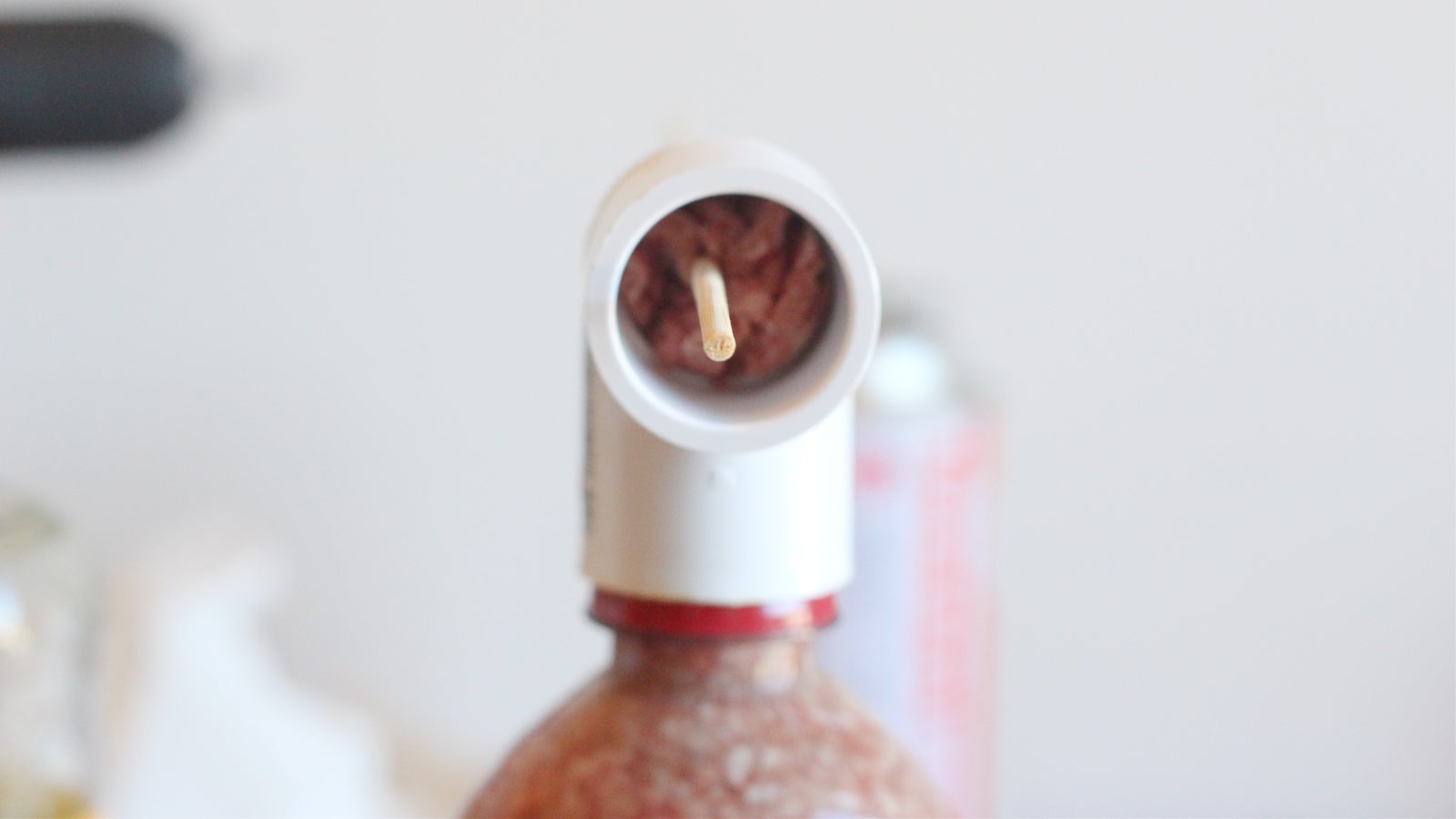 Haunting (Photo: Claire Lower)
To sign up for our daily newsletter covering the latest news, hacks and reviews, head HERE. For a running feed of all our stories, follow us on Twitter HERE. Or you can bookmark the Lifehacker Australia homepage to visit whenever you need a fix.

There are good hacks, and there are bad hacks, and at this online publication, we like to give you the good ‘uns. A good hack should make one’s life easier, whether that’s through using a common object in a new way, streamlining a process, or solving a problem you didn’t know you had. I’m not sure this DIY extruder meats those criteria.

You have probably seen this very viral video by now. In it, a Russian man uses a Pepsi bottle, a Coke can, and an elbow-shaped piece of PVC pipe to create beautiful sticks of meat which I assume are kofta kebabs. A blowtorch is involved, as is a drill. (Already, we are off to a very streamlined, not at all unnecessarily complicated start.)

I enjoy a good meat tube and, after many people brought the video to my attention, I decided making this meat moulder would be a good use of my time. (My editor agreed.) Making and using this contraption ended up being quite the journey, and I invite you to come along.

These Coca-Cola 'Hacks' Are As Pointless As They Are Entertaining

In the pursuit of life hacks, one can be consumed by a madness. The whole world becomes both hammer and nail. Is a power cord a jump rope? Is a sponge a pincushion? With enough time, effort, and visits to the craft store, can anything become anything?

First, I had to gather my supplies. I bought the PVC from the hardware store down the street and a bottle of soft drink form the adjoining grocery store. I own a blowtorch but not a drill, so I asked my stagehand friend if I could borrow hers, because she is very handy. She said she would leave it out on the kitchen table for me, and that I could let myself in and pick it up the next morning.

After I picked up the drill, my friend texted me saying she had forgotten to leave the drill out, casting doubt on my understanding of what a drill was.

But before I could even attempt to make the skewer hole, I had to fuse the PVC pipe to the soft drink bottle. (Actually, I probably could have done either step first.) I turned my kitchen torch to its lowest setting, and aimed it at the pipe. The pipe immediately caught on fire. (I do not have a photo of this because I was alone and my priority was putting out the fire.)

After the fire was extinguished I tried again, this time holding the flame further away. The pipe did not catch on fire again, but it did get much darker than the pipe in the video. It looked like a toasted marshmallow, if marshmallows came shaped like elbows. I shoved the bottle inside the pipe. To my surprise, it formed a powerful seal. 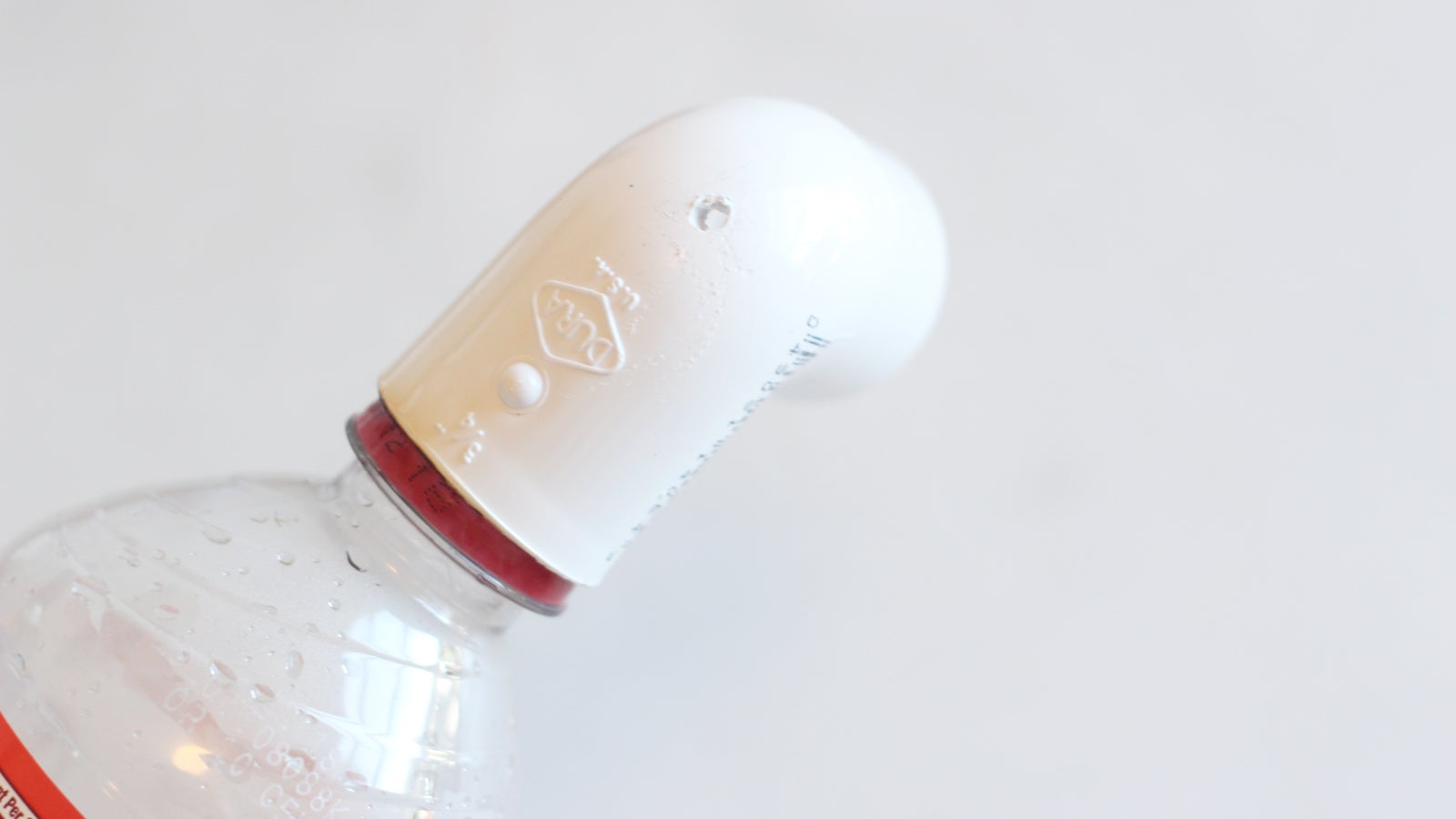 This took longer than it should have. (Photo: Claire Lower)

Then it was time to make the skewer hole. I’m pretty sure I had the wrong drill bit, because I could not make a hole. The bit just slid off the pipe, marring it slightly. I tried to make a little “pre-hole” with a screw, but that was also unsuccessful.

Finally, I decided to head back to the hardware store and throw myself at mercy of the handy people who worked there. I put my pipe-bottle and what I’m pretty sure was a drill in a tote bag, and walked back to the store. When I walked into the store, the probably-a-drill set off the theft alarm.

After I assured the lady at the help desk that I was not robbing them from the outside, I was approached by a very cheerful man. He asked if I needed help, and I told him I was working on “kind of a silly project”. Luckily, he loved silly projects. When I took my pipe-bottle out of my bag, his face lit up. “I know exactly what you’re doing!” he said, positively beaming. “I think I need a different drill bit,” I said, pulling the dear-God-I-hope-this-is-a-drill from my bag.

The nice man did not tell me that what I was holding was not a drill, which made me feel much more confident. He showed me the drill bit I would need. I asked him for some “general drilling tips”, and he told me I should probably use a vice. “I don’t have a vice,” I muttered, new-found confidence dissolving like fairy floss in a puddle.

The very nice man then decided it would just be easier for another nice man to drill the hole for me in the store. The hole-driller had not seen the video, and was perplexed by my soft drink bottle that I had fused with a piece of PVC pipe, but was not interested enough to ask too many questions. He used a sharp tool to make a “pre-hole”, drilled the actual hole, then handed my frankenbottle back to me. Now I was ready for some meaty action. 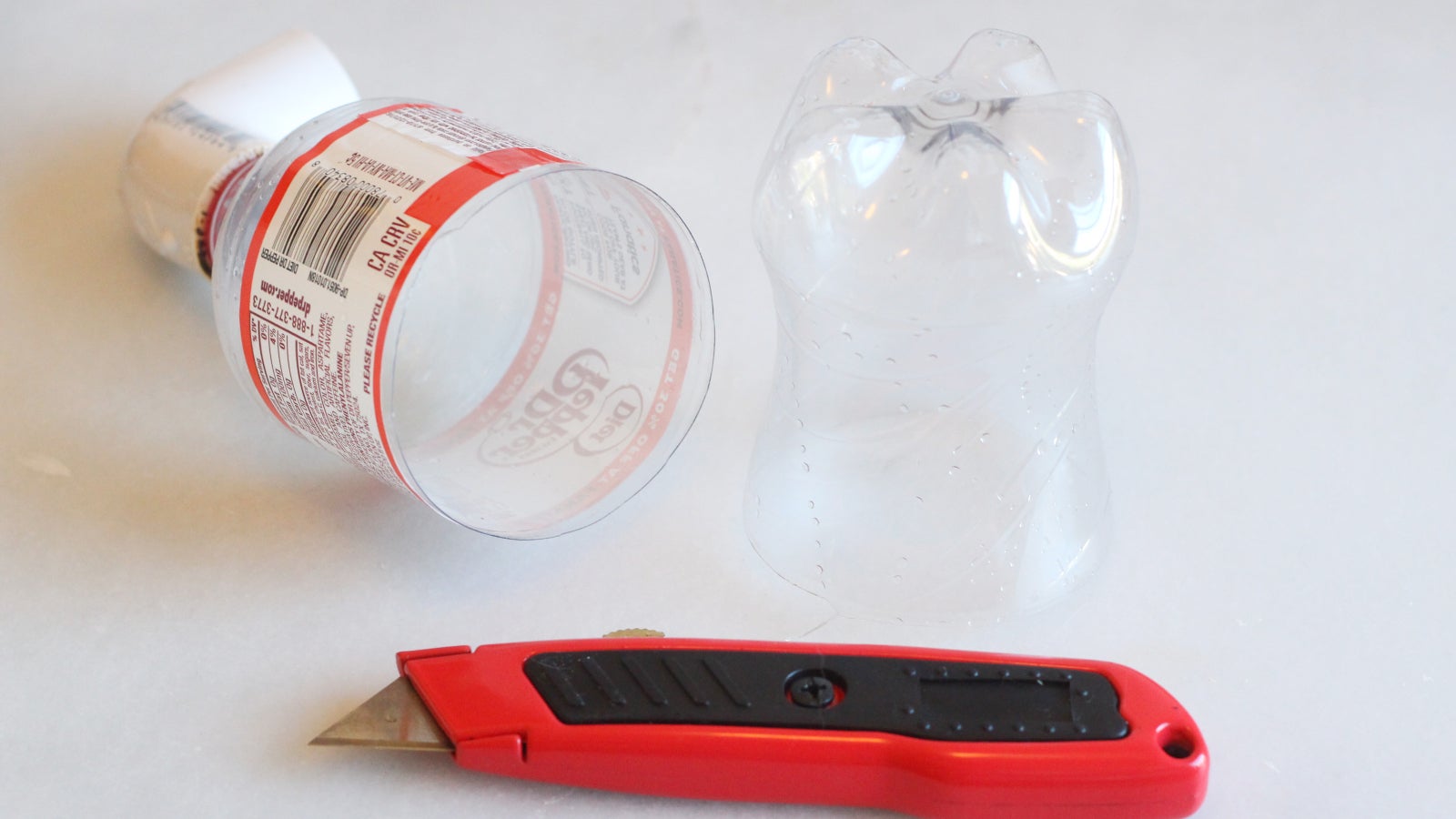 I cut the bottle so I would have a place to put the meat. I did not, however, cut it in the optimal place. A detail I missed during my initial viewing of the video is that the Russian man cuts the bottle slightly lower than its widest point, so that the Coke can fits snugly at the opening but has a little more breathing room inside what I like to call the “meat chamber”. 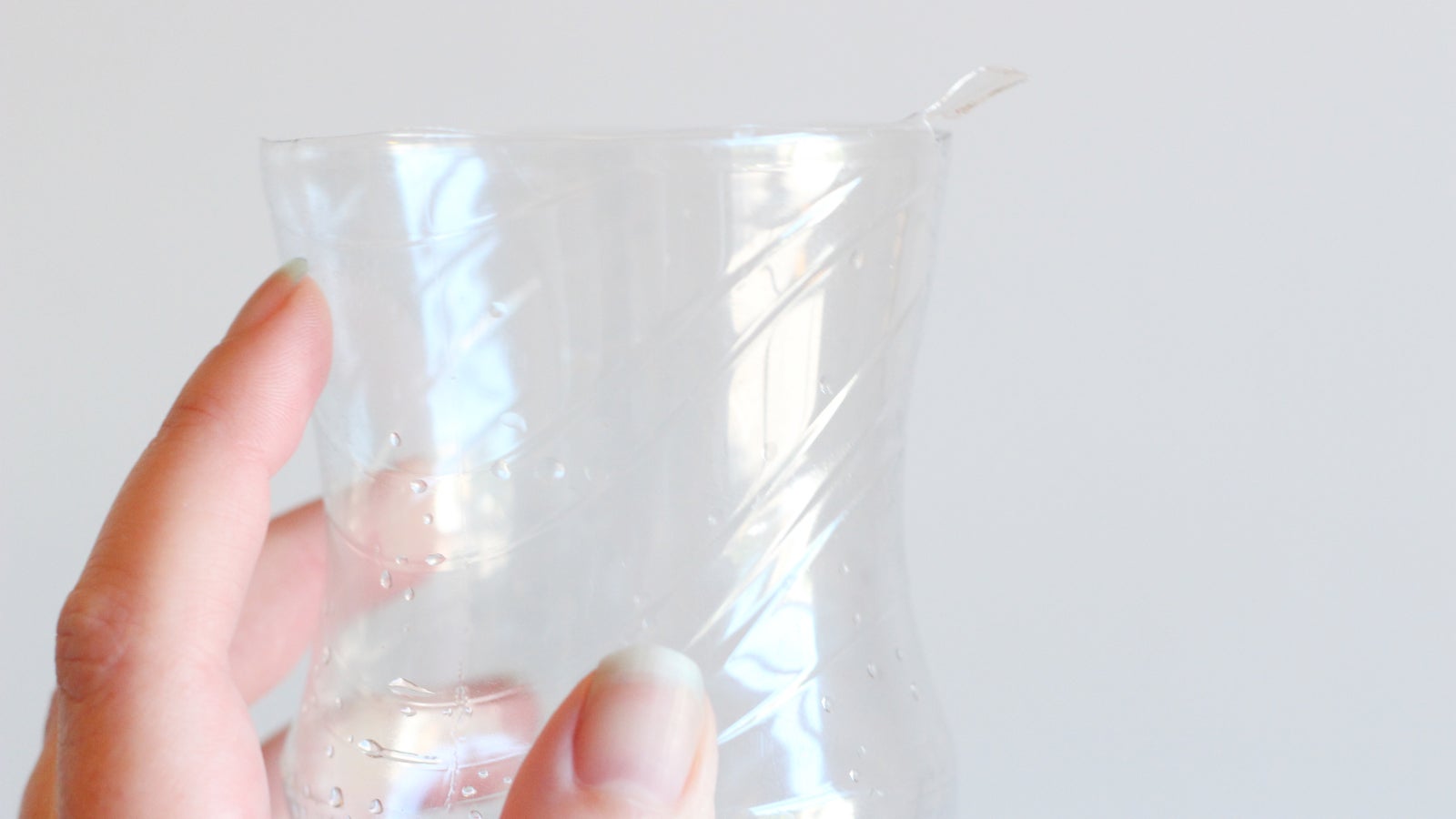 This (where my index finger is) is where I should have cut. (Photo: Claire Lower)

This turned out to not be a huge deal. I stuck a skewer through the skewer hole, filled the meat chamber with ground beef, and pressed the meat down on top of a can of Diet Coke. The meat remained impossibly immobile. 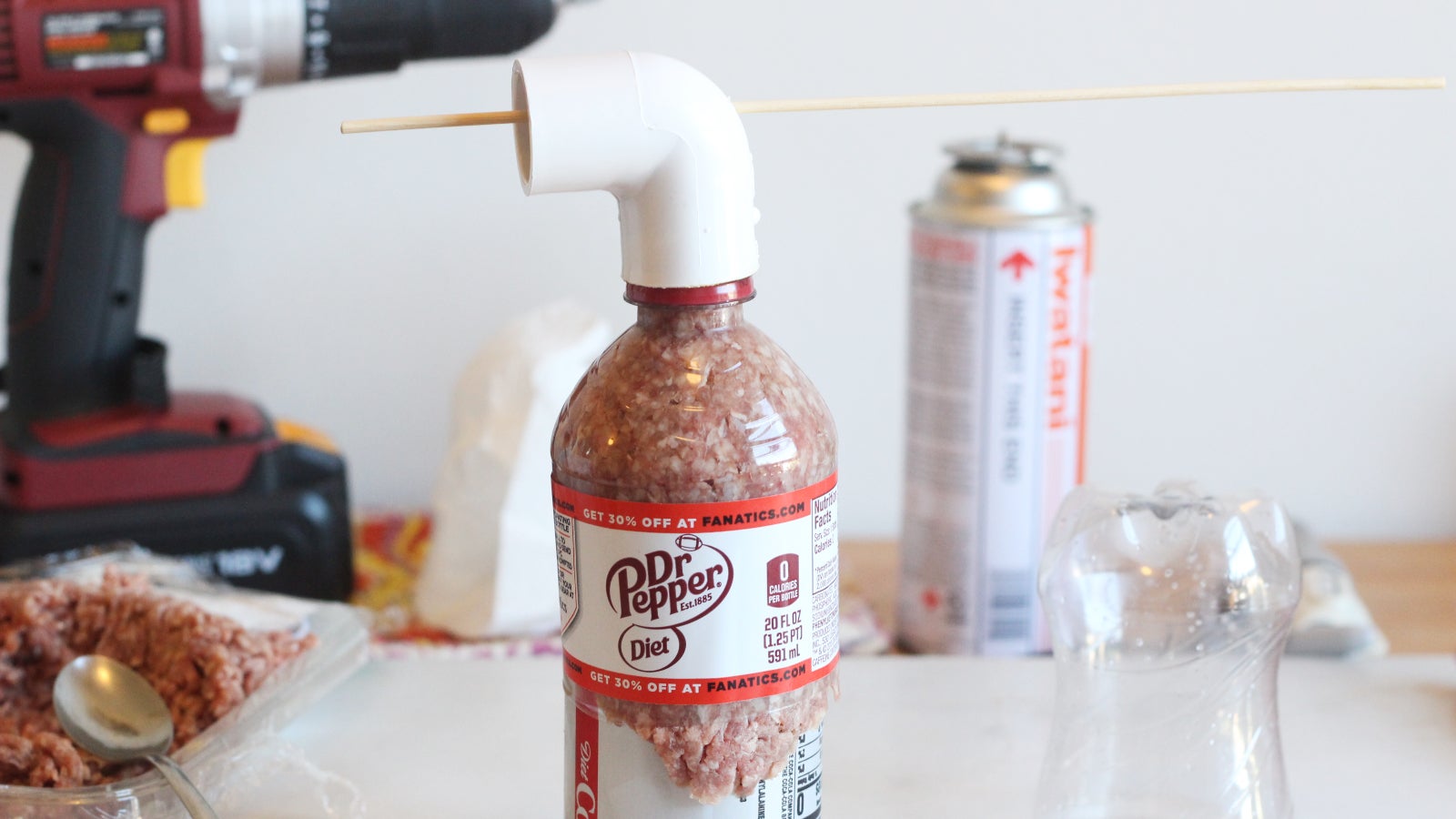 This is fine. (Photo: Claire Lower)

I began to wonder if the texture of the meat was the problem, so I looked up a few kofta recipes to see if the ground beef (or lamb) was usually processed in any way. Several recipes did, in fact, instruct one to put the meat in the food processor. I processed the meat, refilled the chamber, and gave it another go. 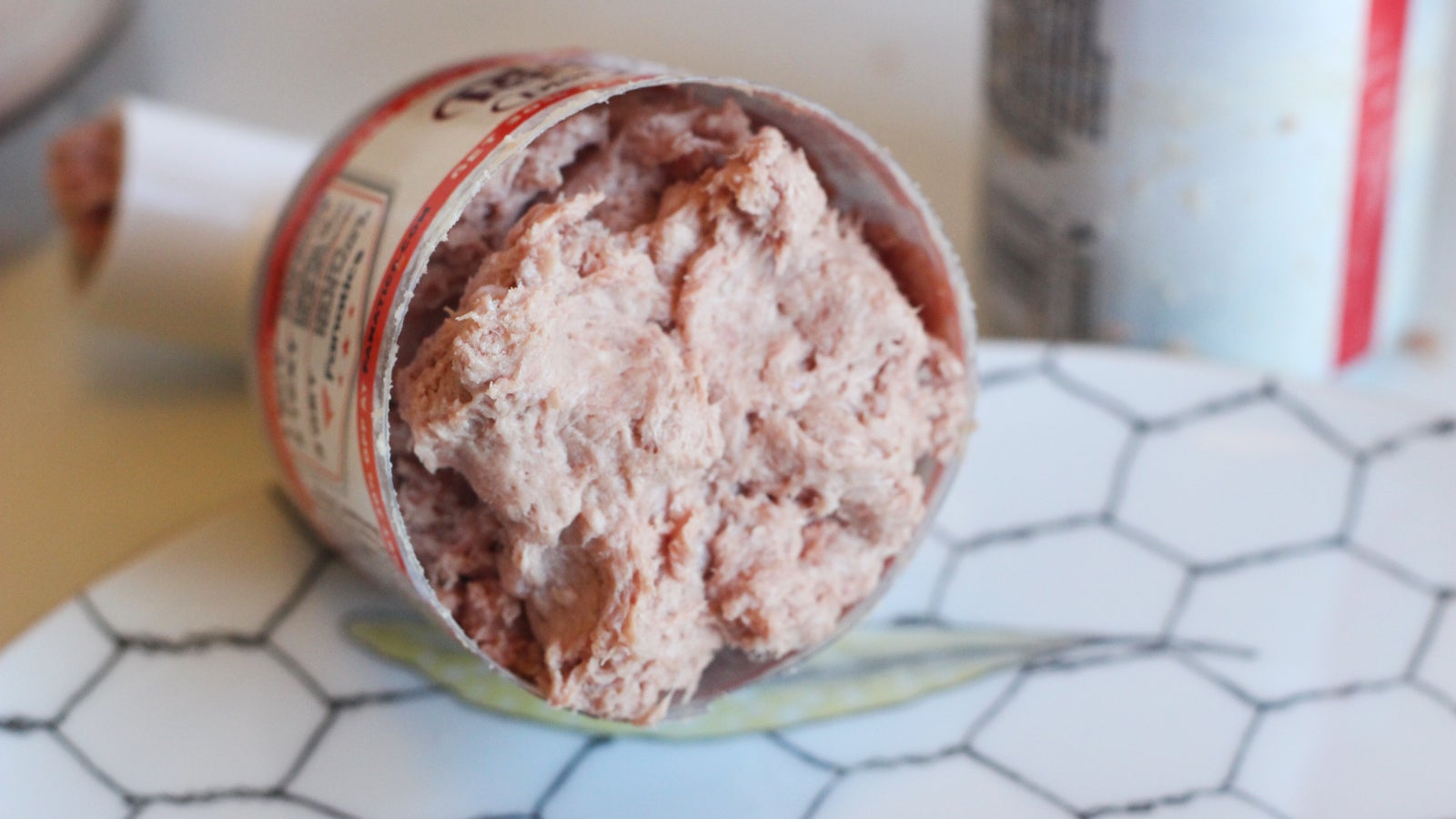 I changed out the Diet Coke can for a jar of pepperoncini, because it fit a little better, and pressed once more. It worked, and the meat slid right out of the chamber, forming quite the meat tube. 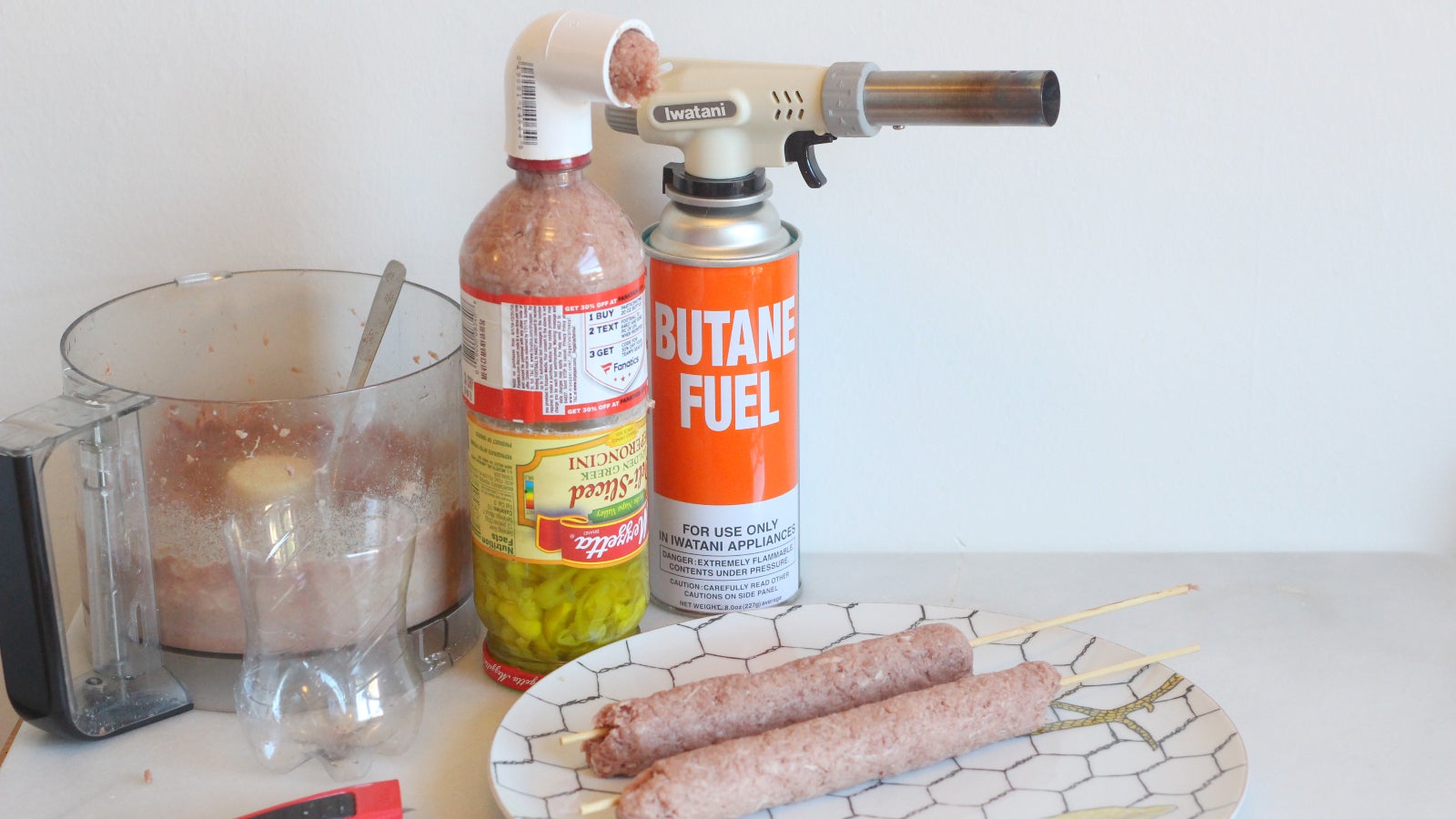 Would you look at that? (Photo: Claire Lower)

The effort required to extrude the meat was slightly more than depicted in the video, and it was kind of hard to move the stick at the same rate of the extruding meat, but I made it work. The meat tubes came out very tube-like, but they did slide around on the stick quite a bit.

I did not cook the meat tubes, partly because I do not have a grill, but mainly because my kitchen still smelled of burnt PVC pipe. I put them in a bag and set them in the fridge.

I’m not sure if I’d call this a “good hack”. Though the contraption did “work”, it didn’t feel “easy”, “simple”, or “worth my time in any way”. For contrast, I moulded some meat around a skewer with my human hands. 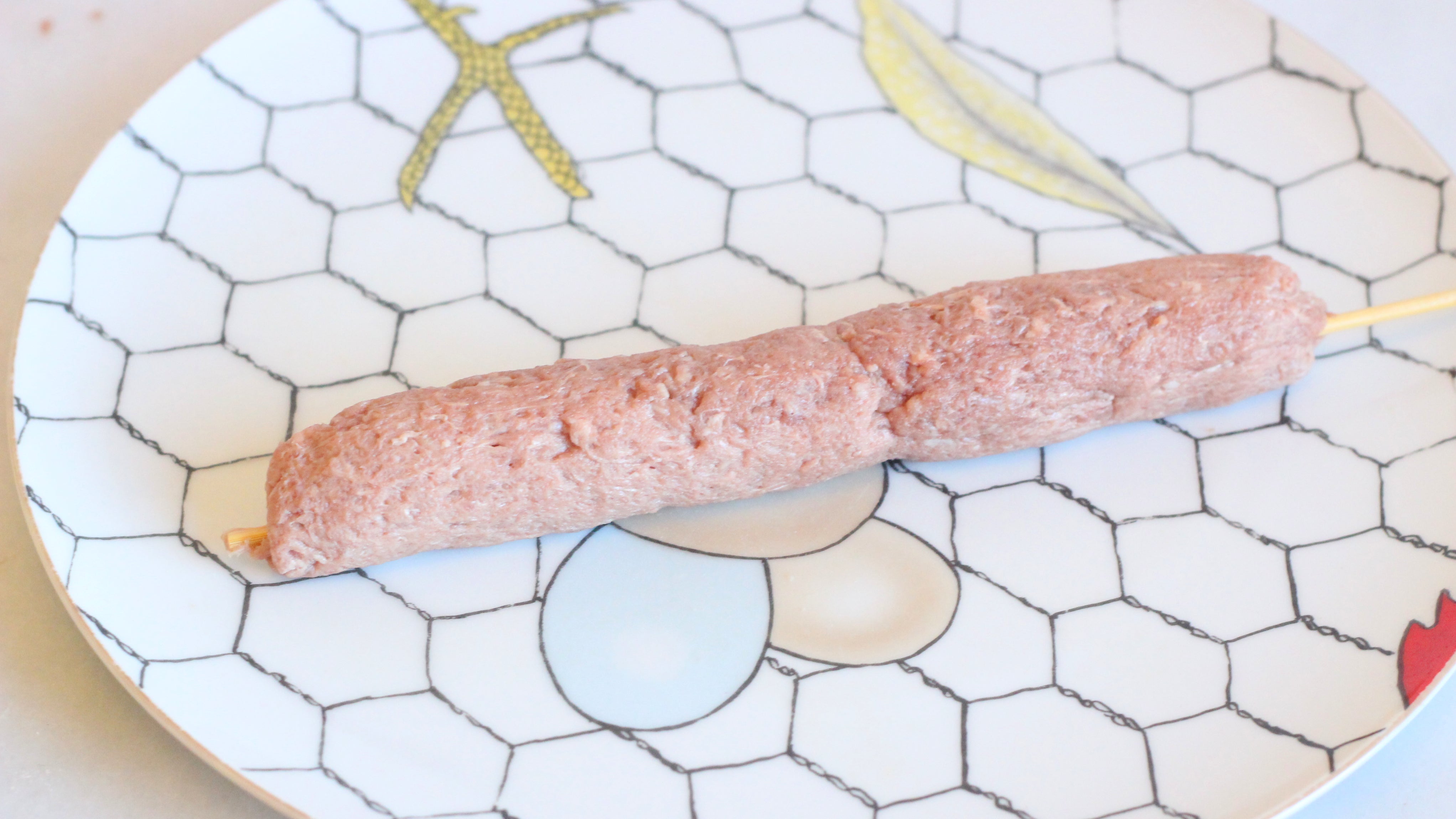 While it might not have been as consistently-formed as the PVC pipe-extruded meat tubes, my hand-formed tube certainly required fewer trips to the hardware store, and the meat didn’t slide around on the skewer.

The DIY extruder is also kind of hard to clean, or at least it seems as though it’s going to be hard to clean. I haven’t attempted to clean it yet. I might just throw it away.