I’m Quantitative Futurist Amy Webb, And This Is How I Work

how i worklifehacker interviews
To sign up for our daily newsletter covering the latest news, hacks and reviews, head HERE. For a running feed of all our stories, follow us on Twitter HERE. Or you can bookmark the Lifehacker Australia homepage to visit whenever you need a fix.

Futurist Amy Webb has led the Future Today Institute since today… was the future. That sounds less profound than we hoped, but Webb’s work is profound.

Since Webb founded it in 2006, Future Today has analysed trends in culture and technology for clients including Microsoft, American Express, Univision (Lifehacker US’ current parent company), the White House and the US Federal Reserve. She’s also published two books and given the TED talk “How I Hacked Dating”.

We talked to her about the perfect carry-on bag, differences between media technology around the world, and the method her Institute uses to efficiently break up their work day.

One word that best describes how you work: Methodically

In Year 6, I joined our school Future Problem Solvers of America team, and without realising it I began my work as a futurist when I was just 11 years old. In university I took a multidisciplinary course of study, which included economics, game theory, political science, computer science and music.

After graduating, I worked as foreign correspondent in China and Japan and spent my 20s living at the epicentre of emerging technologies like smartphones and haptic screens, and I was seeing early, nascent successes with machine learning.

When I moved back to the US, I had a difficult time fitting back in to a traditional newsroom environment. I was convinced that news needed a radically different business model to sustain quality journalism — but I grew tired of apathy towards emerging tech, so I quit.

I secured seed funding to start an R&D lab for news and media, and my focus was on exploring and building new digital distribution techniques. As my team experimented with new prototypes, I became interested in much broader topics beyond journalism — like how the third era of computing (AI) would impact every facet of everyday life, how technology influenced the geopolitical balance, and how our data might become a primary driver of the economy.

I wanted to model and map plausible scenarios for what that future might look like, and that’s when a colleague pointed me to the work of early futurists such as Robert Jungk and Alvin Toffler, and of the quantitative modelling developed by Olaf Helmer and Nicholas Rescher.

I took classes in strategic foresight, read everything I could get my hands on, and pivoted in 2006, when I started the Future Today Institute. I’ve been working full-time as a quantitative futurist ever since.

I now teach foresight at NYU’s Stern School of Business, and my students are incredibly bright and creative.

I also write — I’m finishing my third book now. It’s a manifesto about how the “Big Nine” tech titans are shaping the future of AI. (They are Google, Amazon, IBM, Microsoft, Apple, Facebook, Baidu, Tencent and Alibaba.) My most recent book, The Signals Are Talking, explains my foresight methodology and explains how to use the tools of a futurist to see over the horizon. 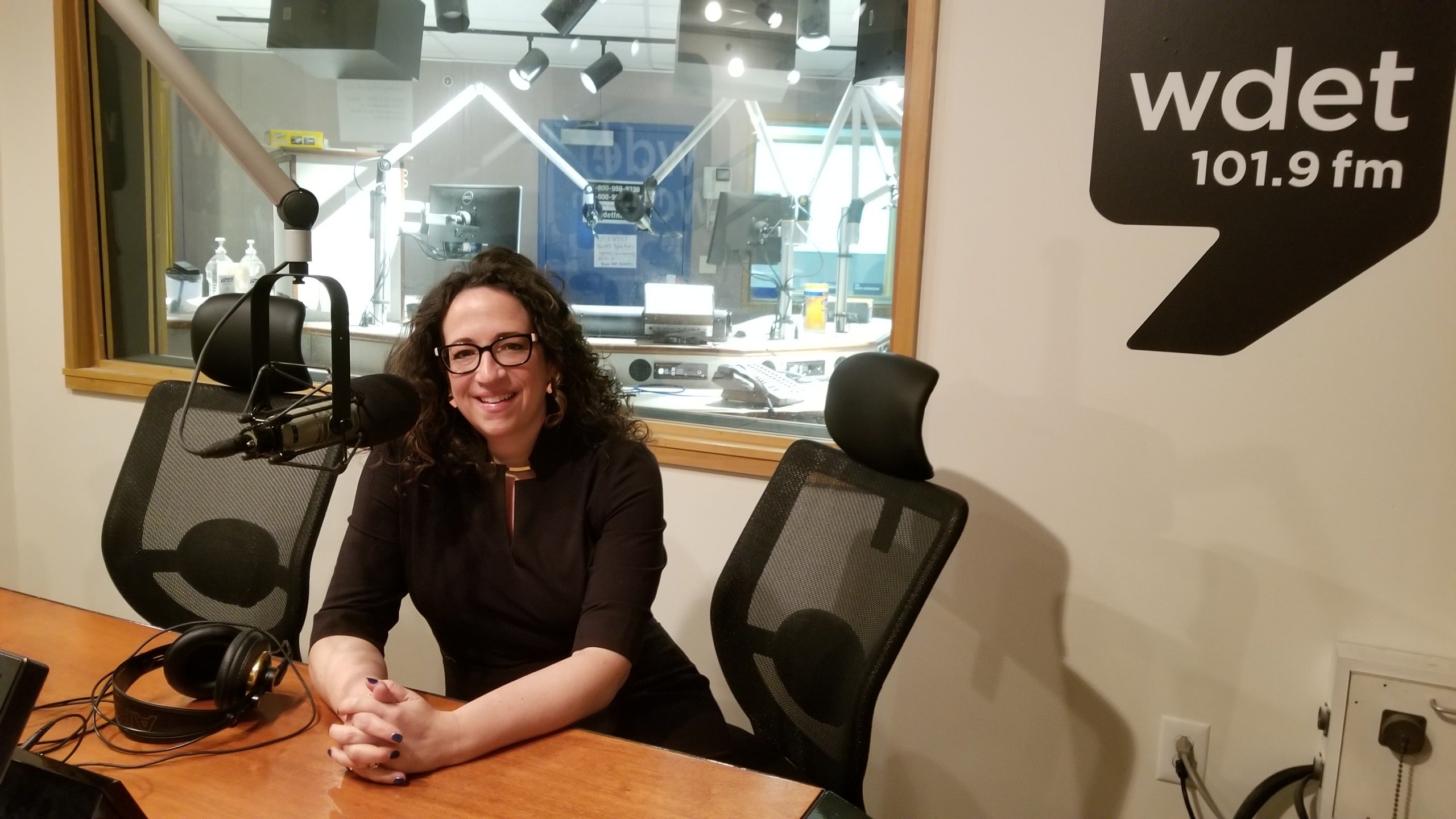 Every day at work is different — sometimes I’m at the office, but often I’m on the road — so I’ll offer you two recent workdays.

On the road: One of our clients is a global petroleum company, and I worked on-site with a team of 15 people to map near-future risk/opportunity scenarios.

We began the session with a deep dive into the Future Today Institute’s forecasting methodology and an explanation of the different dimensions of disruption. Then we mapped weak signals — issues that help us identify emerging changes own the horizon. That was followed by intensive hands-on work.

The session lasted about seven hours. I caught a red-eye home after we finished.

At the office: I’m completing my next book. On book writing days, I get to my office by 7AM and write until 4PM, without taking any breaks. Then from 4PM – 7PM I’m in meetings and answering email.

How do you focus for nine hours without breaks?

The way I stay focused for so long — I think — is a combination of the brown noise, my earphones, and the exercise ball I sit on instead of a regular chair. I get up to use the washroom, of course, and I usually snack on nuts and dried fruit.

Turning off my phones and keeping social media and email locked away have meant a tremendous surge in productivity. I don’t believe in multitasking. In my case, the quality of my work is degraded when I try to do more than one thing at a time. Knowing that there won’t be outside interruptions — tweets, texts, Slack pings — has allowed me to centre my entire focus on just one, singular task.

I listen to brown noise on Spotify. I’ve experimented with different sounds and music, and because I’m more sensitive to higher frequencies, brown noise helps me focus intensively. It’s amazing how well it works. I listen on Jabra Elite 65t Bluetooth noise cancelling earbuds. When I’m writing, I use the Desktop Curtain to block out all distractions.

Because of my intense travel schedule, I spent many years searching for the perfect bag — one that could carry all my gear, plus an extra pair of shoes and a water bottle. For me, the Tumi Sheppard Deluxe Brief Pack is just right. It has a sleeve that lets me secure it to my suitcase, which means that I’m no longer carrying anything heavy on my back. 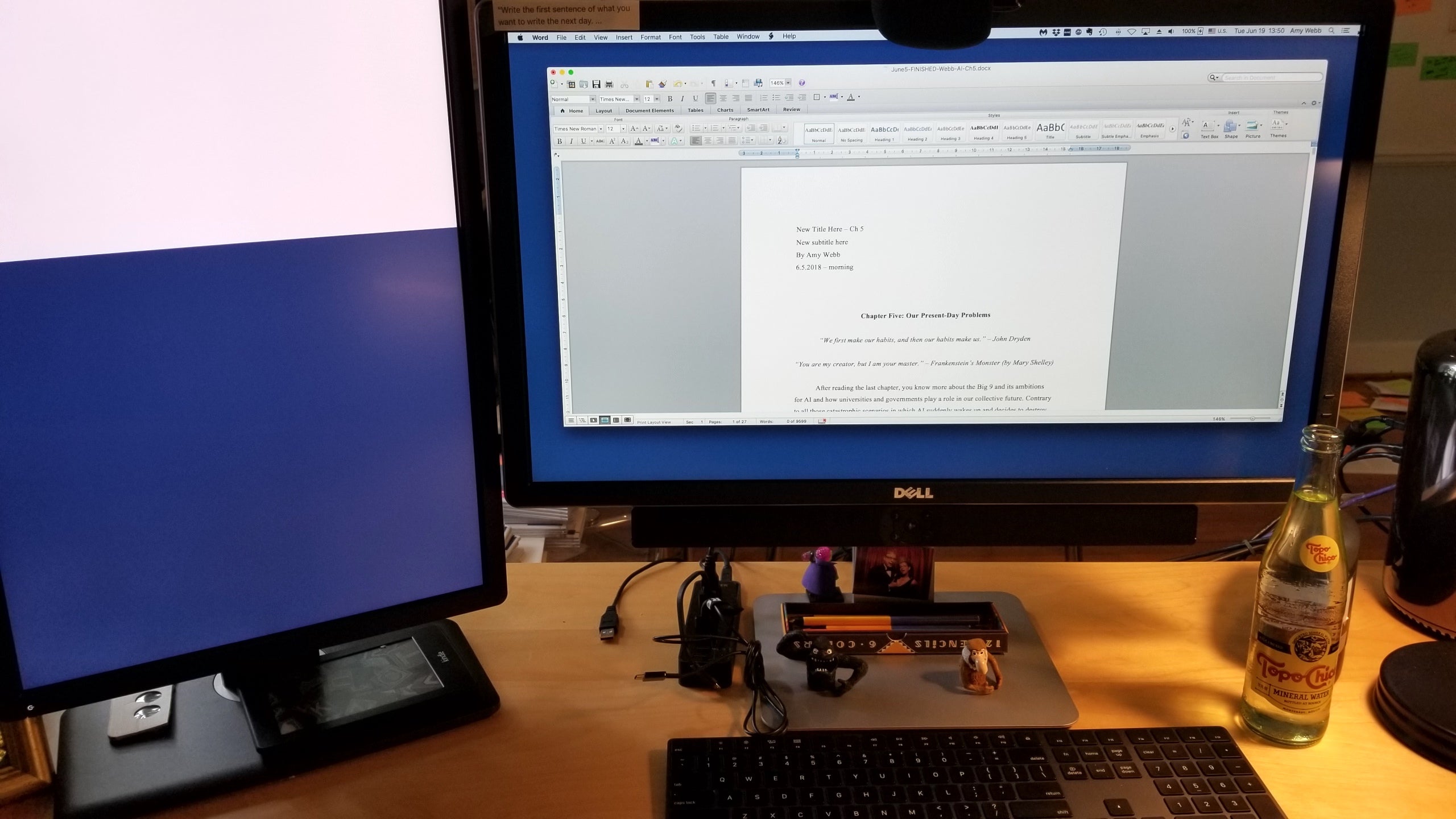 I have two monitors — one vertical, one horizontal. Everything that’s office or communication-related (Slack, calendar, email) goes on the vertical monitor and stays active. All of my writing happens on the horizontal monitor.

My office is covered in Idea Paint. We converted one entire wall, top to bottom, into a whiteboard surface. Many of the other surfaces are made of glass, allowing us to write with whiteboard markers wherever we need to, whether that’s on the windows, tables or chairs.

It’s something I learned from Ben Franklin: Get the big, gnarly hard work out of the way first, when your mind is fully charged.

Take us through an interesting, unusual or finicky process you have in place at work.

Our workdays are divided into 20-minute units, and we use maths to set every part of our schedules. We keep telephone calls/video calls to one unit, and most of our administrative meetings are two units. Certain strategy work takes 12 units. We’ve found that blocking out the day in units has resulted in much better and more realistic time management.

The 20-minute system is something that I developed for myself in university. I worked two jobs and was at one point attempting five majors, so I had to make every single minute of every day count. (I even had to optimise my sleep, because during my first year I was only able to get four hours at a time.)

I found that dividing the day into hours didn’t allow me to get everything done — I’d either set my expectations way too low or too high. The hour convention works well for groups who need to tell time, but I don’t think it works as well for productivity.

For example, I learned that if I have 40 minutes rather than an hour to complete a task, I’m likely to focus and work harder. Meetings that last an hour tend to include a lot of wasted, unproductive moments. The 20-minute unit system is definitely an adjustment for people who work with me.

If I have 40 minutes rather than an hour to complete a task, I’m likely to focus and work harder.﻿

Our team is distributed — we work out of spaces in many different cities and don’t have a central physical hub. Collectively, we can’t function without our director of operations, Cheryl Cooney. She is the engine that keeps me, and the Future Today Institute, running. She manages and executes all of the decisions that don’t require my direct involvement.

We have a three-tiered system of delegation: Immediate, the next few days and longer-term. We allocate in advance the number of units required to complete all of these tasks. We’ve experimented with various task management software, like Trello and Asana, but ultimately I’ve found that a combination of Slack, Google docs and a physical notebook works best for me. 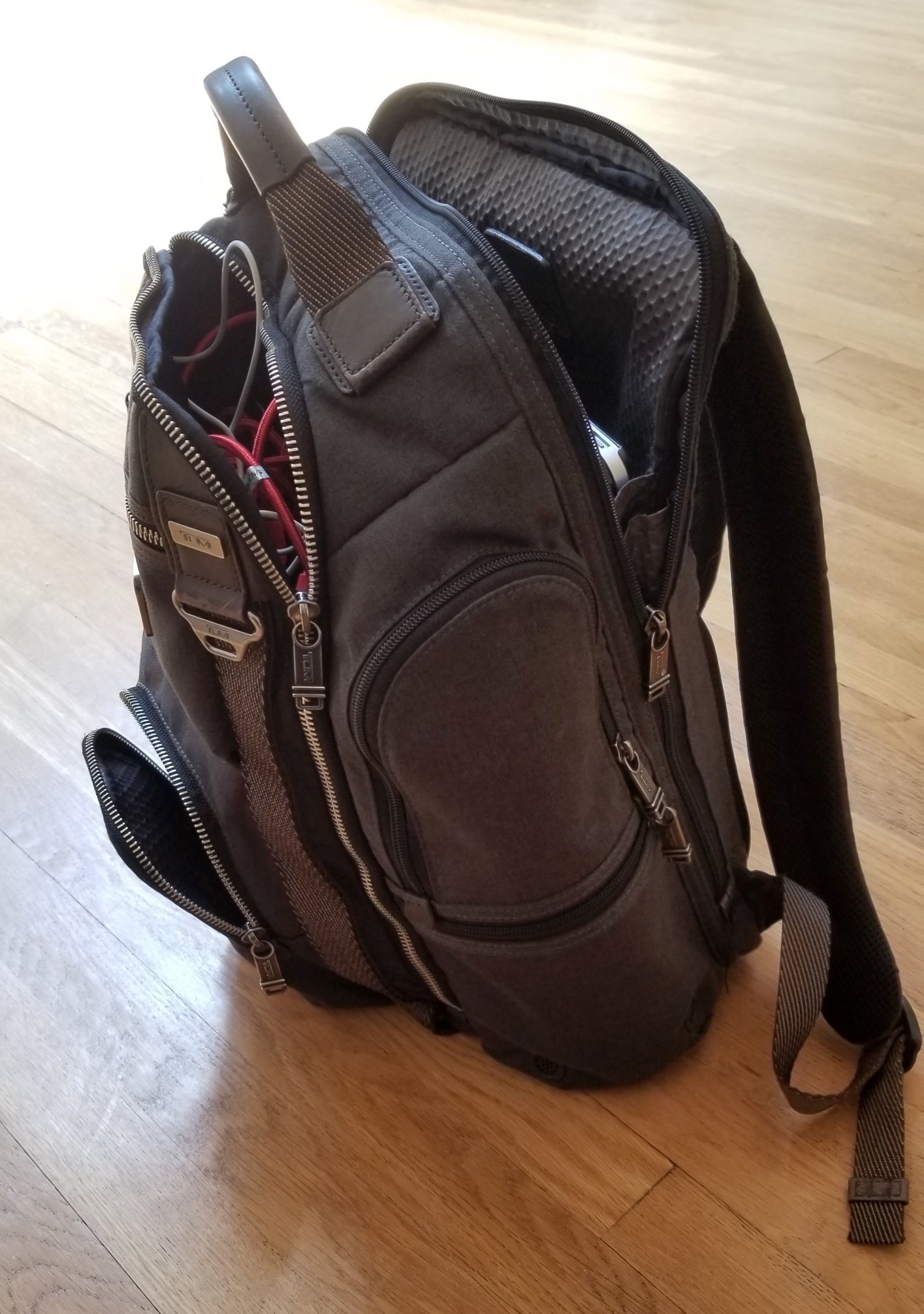 I break a sweat daily — usually spinning or jogging. Paradoxically, wearing myself out exercising is the best way to recharge. I also try to get outdoors at some point during my work day, to take a walk to just sit in the sun for a few minutes.

I consult on TV shows and movies, helping talented show runners, writers, producers and production staff see the future. Most recently, I worked with Beau Willimon and his team on The First, which is his upcoming series on Hulu and portrays members of a team of astronauts as they become the first humans to visit Mars. It’s set in the year 2031 and it stars Sean Penn and Natascha McElhone.

I just finished Borne by Jeff VanderMeer and am currently reading The Power by Naomi Alderman. They are both terrific.

My mentor, MJ Ryan, taught me to work incrementally. Mountains are climbed by taking a series of steps. With each and every project, I need to think about all of the steps first, without losing sight of the summit. She’s trained me to think about the present and future simultaneously.

My goal is to democratise the tools of futurists, and to get every decision maker to think more about the farther future. America is a country of “nowists” — that’s a problem I have yet to solve.