They don’t call it the ‘World Game’ for nothing: Alongside the Summer Olympics, the FIFA World Cup is the biggest sporting event on the planet. Over four weeks, the best 32 teams in the world will compete in 64 games to determine a winner. Here’s everything you need to know about watching the 2018 World Cup in Australia.

It's Australia's last chance to remain in the World Cup! Want to watch the Peri match live and free on your phone or laptop? We have the FIFA World Cup 2018 live streams right here!

You will be able to tune into SBS’s free-to-air channels to watch Australia and “game of the day” games live. In all, just 25 matches (from a total of 64) will be broadcast live. Here’s the SBS broadcast schedule.

Update: SBS will now broadcast every match during the group stage. Details here!

How To Watch The 2018 World Cup Online

Unlike in previous years, Optus has snapped up the rights to stream the World Cup in Australia. (Sadly, this means you can’t just rely on SBS for all your soccer needs.)

To watch online, you’ll need the Optus Sport app which will set non-Optus customers back $14.99 a month. (Note: If you’re already an Optus customer, you might be eligible for Optus Sport – check your inclusions.)

On the plus side, Optus will be streaming every single game of the World Cup live, so you don’t need to swap between various platforms and services. Phew. Crucially, the app is compatible with Chromecast which means you can stream the matches directly to your big-screen television. There’s also no lock-in contract, so you can cancel as soon as the World Cup finishes.

Alternatively, you can watch select matches for free via the SBS 2018 FIFA World Cup webasite.

How To Watch The 2018 World Cup On Your Phone

Watching the World Cup on a tiny smartphone screen is bonkers but we understand it’s sometimes your only option. The Optus Sport app is available to download from the iTunes and Google Play stores. Likewise, SBS’s World Cup coverage is available on Android and iOS.

How To Watch The 2018 World Cup For Free

Sadly, this year’s World Cup will not be broadcast in its entirety on free-to-air TV. (Optus didn’t spend all that money for nothing!) As mentioned above, you will be able to watch 25 matches – including most of the big ones that people care about – on SBS.

If you don’t care about watching live, the Optus Sport app will be providing free On-Demand match replays to non-subscribers. Simply download the app, sign up for a free account and you’re set.

Five Ways To Watch The World Cup For Free In Australia

For the past few decades, it's been possible for Aussies to enjoy the FIFA World Cup without paying for the privilege - telly reception permitting, of course. This year, Optus has snapped up the rights to the event in Australia which means you can no longer rely on free-to-air TV. Fortunately, there are still options available for those who refuse to pay.

Want to watch the World Cup in HD? Of course you do! If you have a compatible laptop or HD TV, you can catch every SBS game in glorious high-definition. Click here for details.

How To Watch The 2018 World Cup On Foxtel

The short answer is: you can’t. With SBS and Optus stitching up the rights to the World Game, this is one occasion when a costly Pay TV sports package won’t come to the rescue. Tch.

How To Watch The 2018 World Cup On The Radio

SBS Radio will be providing live coverage of all 64 matches in multiple languages. Click here!

The 2018 FIFA World Cup is being hosted in Russia. Scarily, there was talk of Australia boycotting the event over Russian spy allegations, but cooler heads prevailed in the end.

The Socceroos Might Not Play In The 2018 World Cup

We have some potentially devastating news for Socceroos fans. in response to the ongoing stoush between Russia and our international allies, the government has announced that Australia may boycott the upcoming World Cup in Russia as a retaliatory response. Here are the details.

The qualifying teams are divided into eight groups, followed by a series of knockout stages which begin on June 30. The initial groupings are deliberately skewed to give the best performing teams a higher chance of progressing. (Otherwise, you could end up with too many shock upsets.)

Here are the groups for the opening stage: 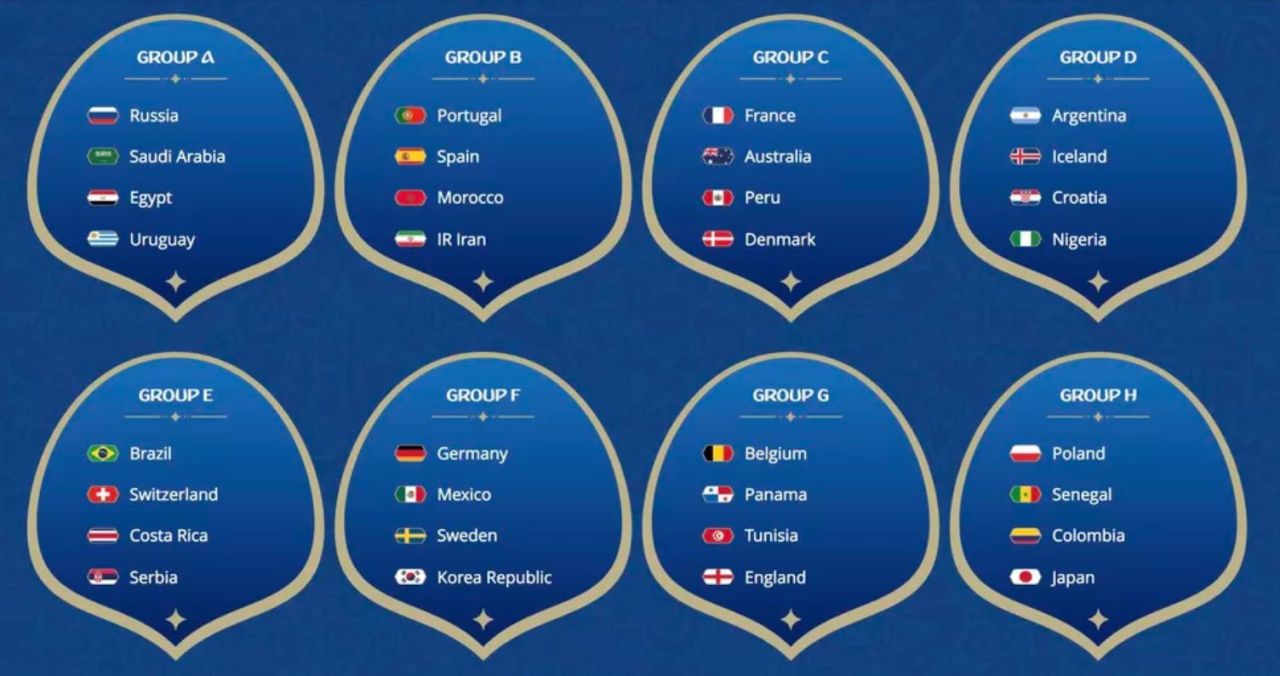 As you can see, Australia has it’s work cut out for it if it wants to progress to the knockout rounds. Even drawing against France, Peru or Denmark is going to take a lot of skill, luck and mettle.

How To Just Watch Australia In The 2018 World Cup

If you’re a fair-weather fan, you’re probably only interested in watching the Socceroos play. It’s highly unlikely that Australia will progress beyond the first stage, but that still means you have three matches to enjoy. Here are the times in each state and territory:

If you interest in the World Cup begins and ends with Australia, you can find out more about watching them live in our dedicated Socceroos guide.

How To Watch Australia At The 2018 World Cup

Football fever is about to sweep the nation once again as the 2018 World Cup kicks off in Russia. The Australian soccer team - the Socceroos - limped to the qualifying line, overcoming some pretty dismal performances along the way to qualify as one of the World's 'Best 32' teams. They've got some tough competition in the first Group Stage, taking on France, Denmark and Peru. How will they fare? Let's not discuss, let's just hope. Here's when and where to catch every game the Socceroos play in at the World Cup, live and free!

When Is The World Cup Final?

The World Cup 2018 Final will take place on Monday, July 16. Kickoff is scheduled for approximately 1am AEST.