There’s a new Australian mobile network in town(s) and it’s named TPG. To get people on board with the new network, the telco announced yesterday that the first TPG customers will get the first six months of an unlimited mobile data plan for free and they expect to be ready to launch in “Q3-Q4”. Here’s all the details.

More details of the Unlimited Data plan are still to be revealed but so far we know that, for TPG customers, the first six months will be entirely free. The Unlimited Data plan follows those we’ve seen recently with Telstra and Vodafone where customers get a certain amount of data at untethered speeds, after which the telco slams the brakes on the speed and allows you to use as much data as you like.

In TPG’s case, that limit is 1GB each day. That’s right. 1GB. Every day, you’ll get yourself 1GB at 4G LTE speeds and then TPG will cap that data speed at 1Mbps for the rest of the day.

As yet, it seems that customers will be able to choose to stay on the plan after the free trial period is over, and they will pay just $10 a month.

Not a bad deal.

As the network is brand new, coverage is limited compared to Australia’s current providers, Telstra, Optus and Vodafone. In fact, in both Adelaide and Canberra, there are very few places where you’ll get reception on the new network. That’ll make it hard for TPG customers in those two locations to take full advantage of the network. You can see the full list of locations where coverage is expected here.

It’s not long, right now, but Levy insisted in the press release that “mobile network coverage will increase significantly over time as we make the best use of our extensive fibre optic network assets.”

They’re also using the girl from the “Distracted Boyfriend” meme as part of their marketing materials which calls for this: 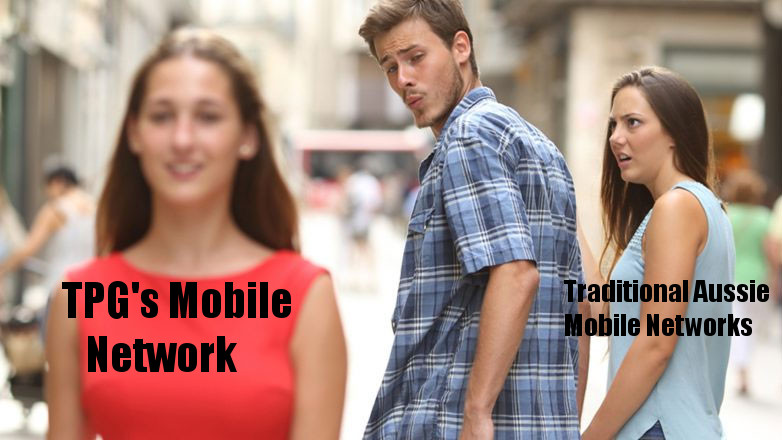 You can register your interest for the new network with TPG here.

How Telstra And Vodafone Can Sell You 'Unlimited' Mobile Data, With Limits

Both Telstra and Vodafone unveiled unlimited data plans for mobile customers this week and some are, again, questioning the use of the term 'unlimited'. Rightly so! We've seen it all before with ADSL broadband, they say!</p><p>This time it's a little different. The telcos have wisened up.