Fantastic Beasts 3 Just Got An Official Title And A Fast-Tracked...

How Will Postage Delays Impact Your Christmas Shopping This Year?

How to Convince Your Boss That You Should Work From Home...

Use ‘Dark Reader’ to Force All Websites Into Dark Mode in...

Will It Sous Vide? Tasty And Tender Corned Beef

Happy St Patrick’s Hangover Day, and welcome to a particularly on-theme instalment of Will It Sous Vide?, the column where I make things with my immersion circulator.

Will It Sous Vide? Way Too Much Black Pudding

Hello sous-vide friends, and welcome to a fairly sanguine instalment of Will It Sous Vide?, the column where I make things my immersion circulator.

As you probably already know, the “corned” in corn beef has nothing to do with yellow kernels, but is simply another word for curing or pickling. “Pickled beef” doesn’t have quite the same ring to it, though, so we’ll stick with the corn. 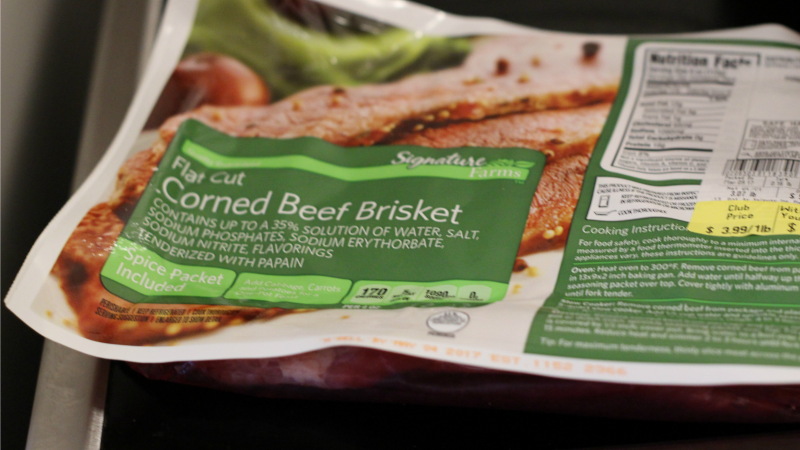 To get an idea of exactly how big of an impact my Anova would have on the our pickled brisket, I bought three hunks of cow: Two that were pre-packaged and already cured, and one untreated brisket (flat cut) for curing at home.

Using Meathead Goldwyn’s curing recipe, I whipped up a mixture of salt, prague powder (sodium nitrate tbh), brown sugar, pickling spices and garlic. I then realised that the only container I had that was big enough to house such a situation was my produce drawer, so I moved my very impressive collection of fruits and vegetables (three clementines and one sad head of romaine I’m clinging to in the hopes of “eating salad”) to a shelf. I then scrubbed the drawer thoroughly with the hottest and soapiest of water, gave it a good rinse, and filled it with meat and salty-sweet water. 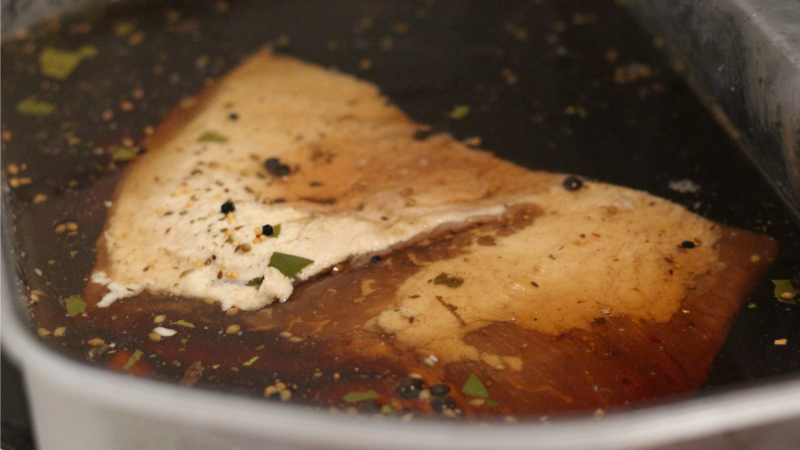 I then covered the drawer with plastic wrap, shoved it shut, and let it live there, rent free, for a week. After seven days had elapsed, I removed the meat, patted it dry, and gave it a rub down with a mix of herbs and spices. 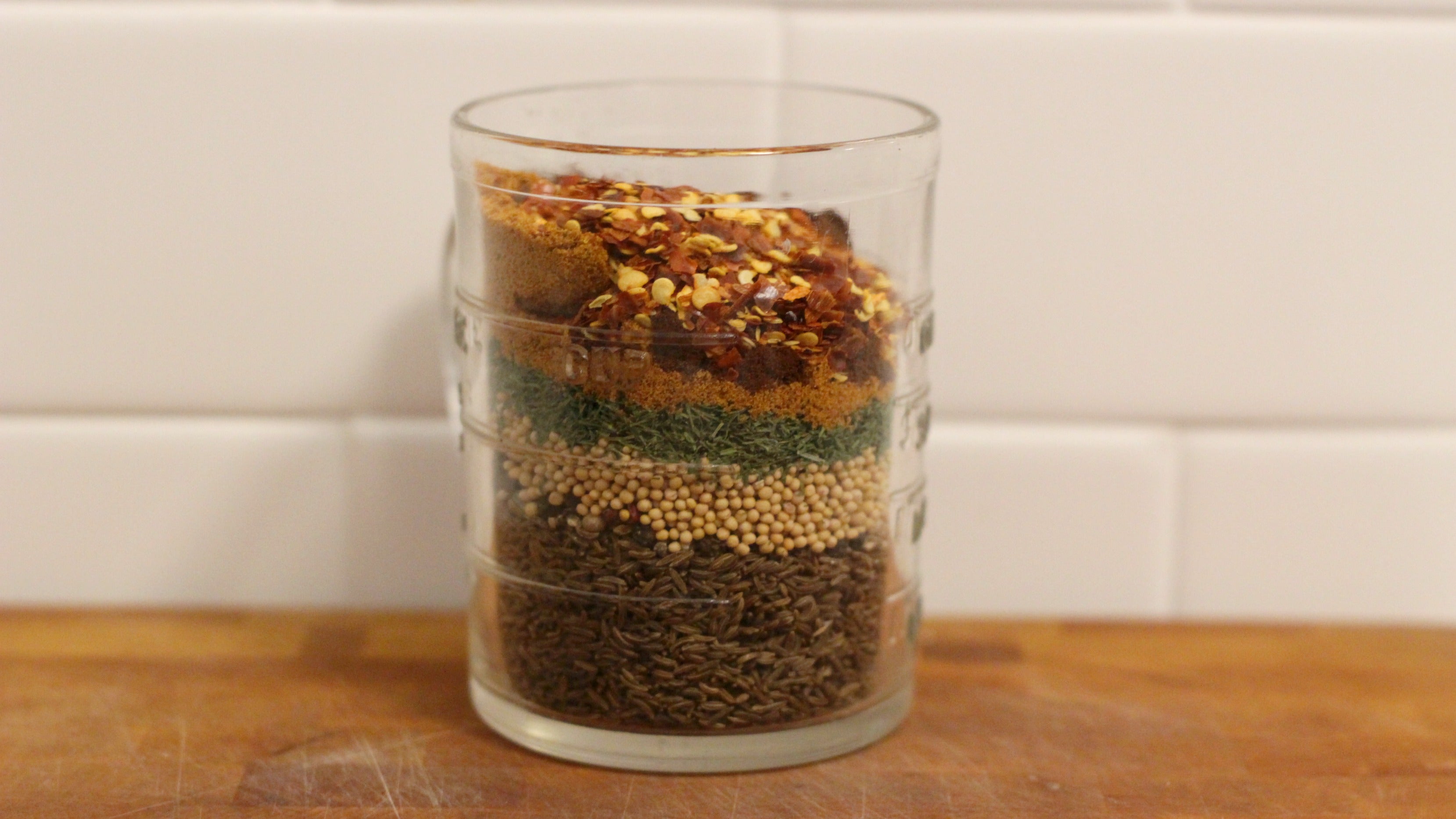 To make the mixture, I very loosely followed ChefSteps rub recipe from this piece, but I didn’t have coriander (I used caraway) and didn’t have enough black pepper, so “85 grams” turned into “as much as I have in this little jar”. “Dill seed” also became “straight up dill”, because I had straight up dill and wanted to use it up. 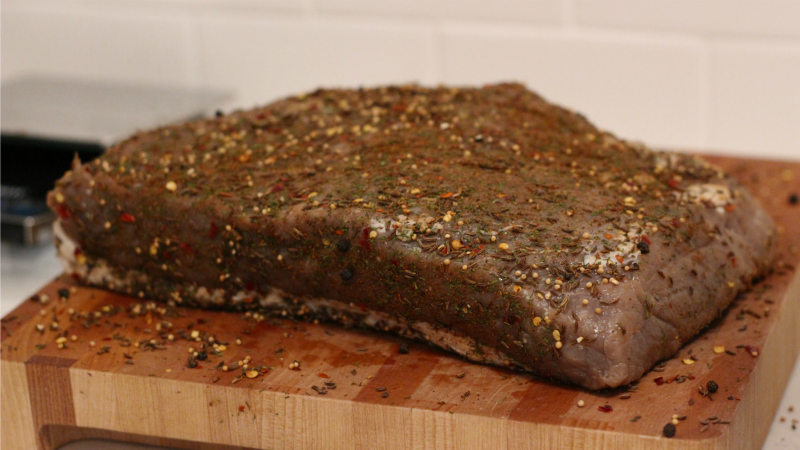 Anyway. I rubbed my unique spice blend all over that beef, then sealed it in a vacuum bag. I then grabbed one of the store-bought beefs, sprinkled in the spice packet, and sealed it in its very own vacuum bag. While doing this, I noticed that the store-bought specimen had a slimy, kind of gelatinous feel to it that kind of creeped me out. (It just didn’t feel like meat.) This was probably due to the fact that it was treated with papain, a tenderising enzyme that has all sorts of neat uses. Both beefs went into a 63C bath, where they stayed for a total of 48 hours. 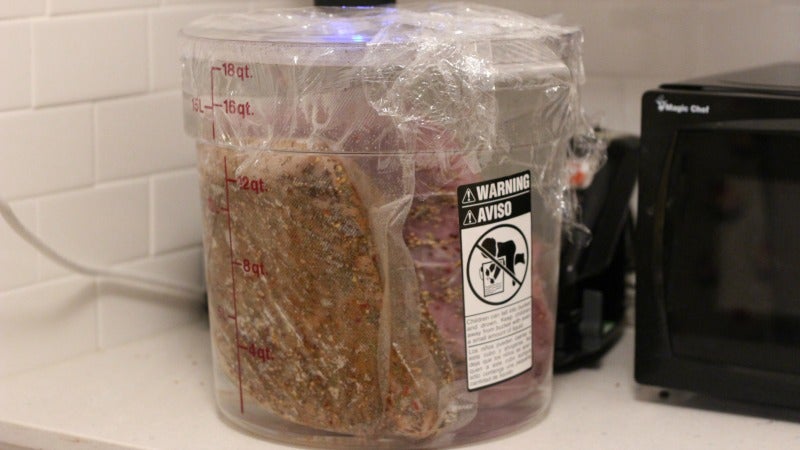 About seven hours before the sous-vide beefs were due out, I grabbed the other store-bought corned beef and chucked it in the slow cooker, along with half a cup of water and the spice packet, as directed by the instructions. Once everyone had been in their cooking vessels for the appropriate amount of time, we were ready to taste. 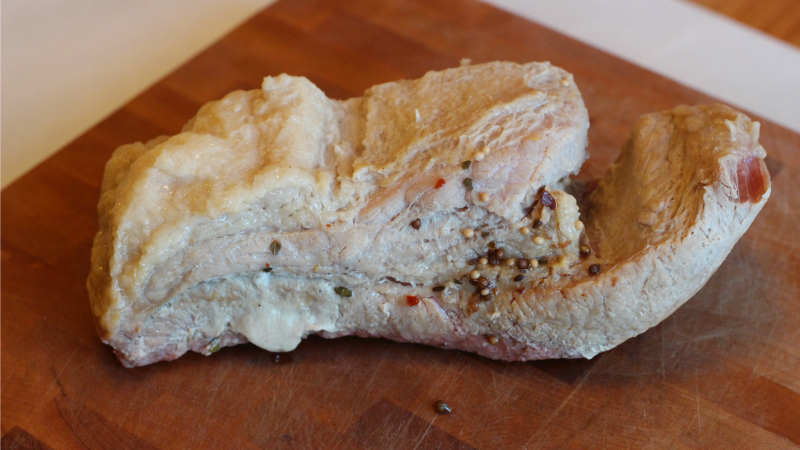 The slow cooker is a cruel mistress.

I started by comparing the two pre-packaged pieces. As you can see from the above photo, the beef cooked in the slow cooker kind of shrivelled up into a claw-like shape. It was also a quite dry, and not super flavorful. 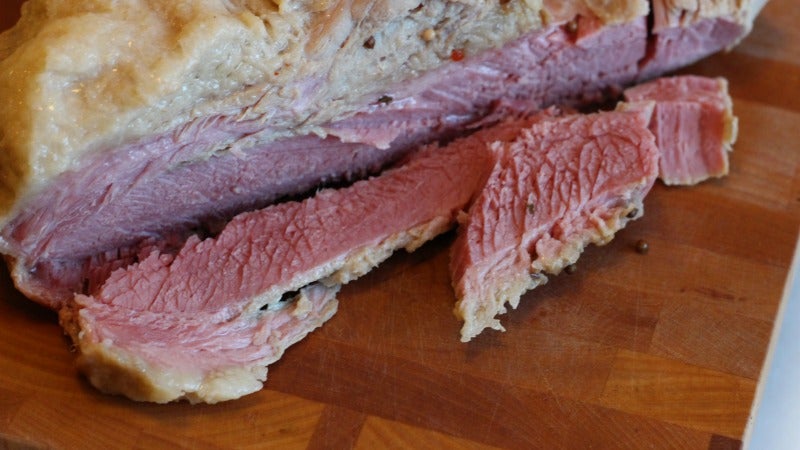 The texture of the sous-vide sample however, was so tender that it started to fall apart while being moved from the bag to the cutting board. 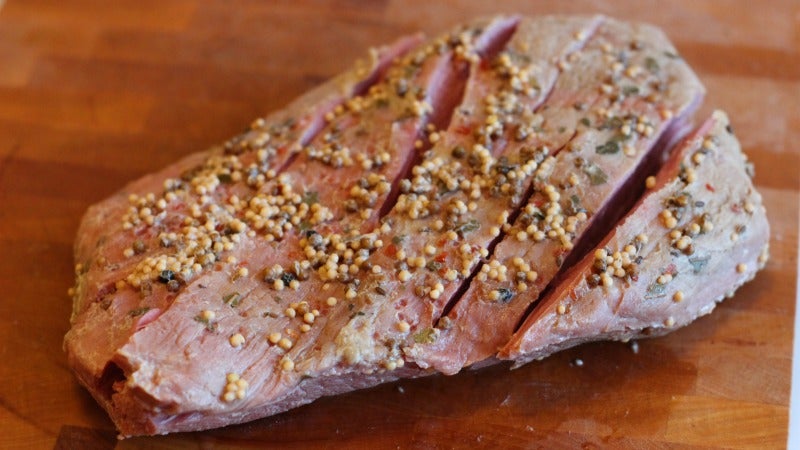 The meat was super supple, and it had that classic “store-bought corned beef” flavour, which isn’t necessarily a bad thing. 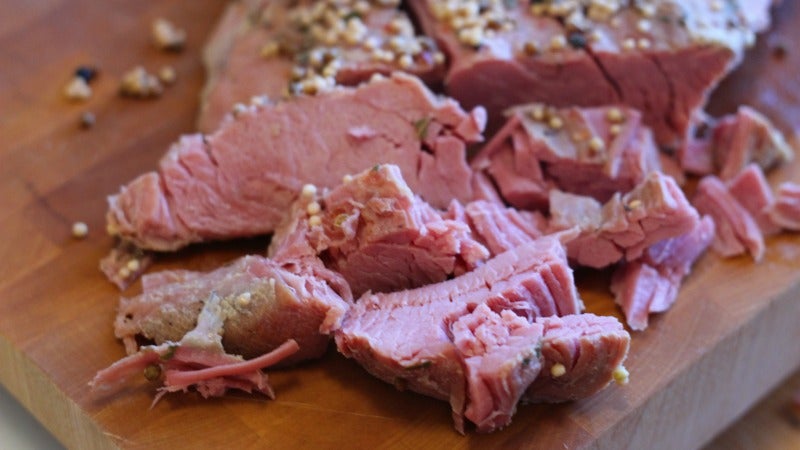 It wouldn’t even stay in slices

I had weighed each piece of meat before and after cooking, and was surprised to find that they lost pretty comparable amounts of weight (about 900g). 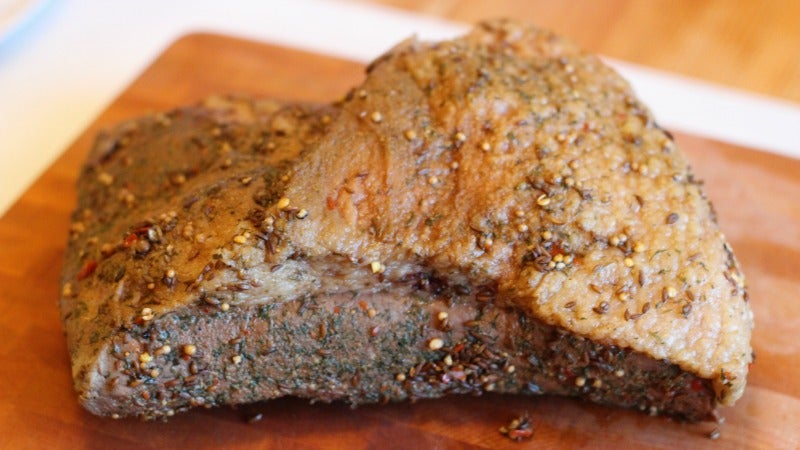 I then turned my attention to beef I had cured myself. 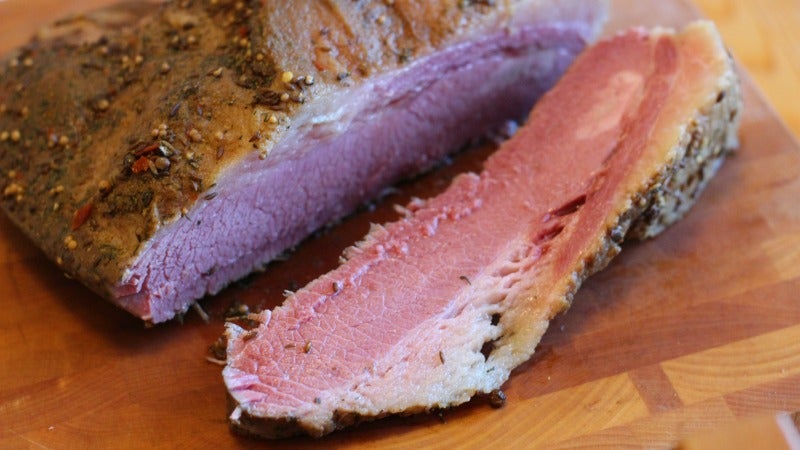 Here’s the beef. My beef.

Though this one didn’t fall apart like the papain-treated brisket, it was still tender and juicy, and it had a better, slightly sweeter, meatier flavour, thanks to Meathead and ChefStep’s respective recipes. Rather than falling apart with a glance in its direction, this beef ate more like a tender steak, if that steak had been pickled. 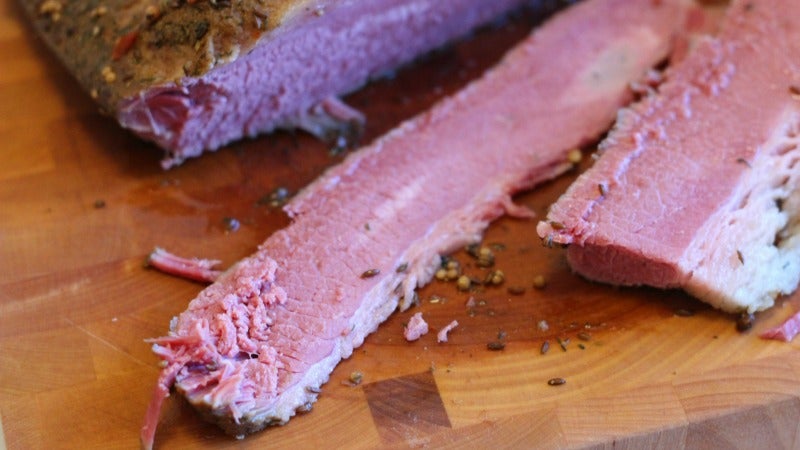 Its only shortcoming were little greyish streaks of not-quite-cured beef, which isn’t a huge deal, and could be solved with just a couple more days in the salty bath. 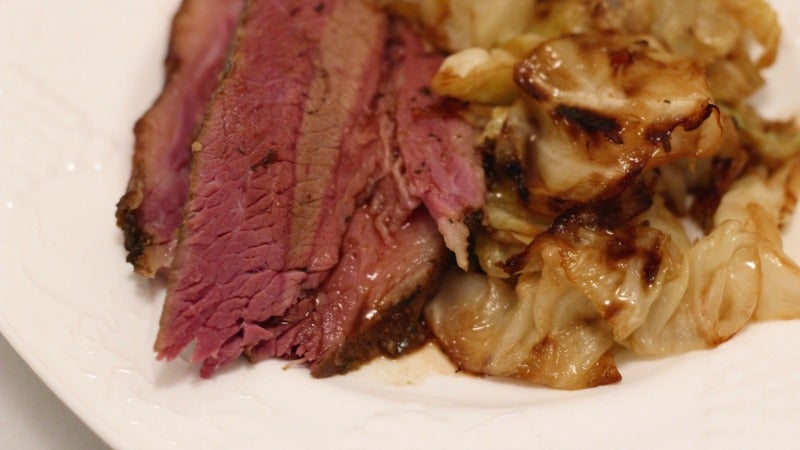 You can see the uncured streak more clearly here.

I think you already know the answer, but we gotta ask the question anyway: Will corned beef sous vide?

The answer: Oh hells yes, my babies, and I don’t think I’ll be making it any other way ever again. A store-bought slab of cured brisket is greatly improved by a dip in our circulating bath, and the combination of muscle-tenderising papain plus this super low and slow cooking method resulted in the most tender corned beef I’ve ever had. That being said, the home-cured corned beef still had a great texture and a ton of flavour — and it was my favourite overall — though it would have benefited from a couple more days of curing. (That’s not the fault of the Anova though, that’s just a time management issue.) So yes, whether you’re buying a pre-packaged beef or pickling your own, sous vide is a super fine cooking method for this tasty, oh-so-Irish meal.