Amazon Is About To Kick Traditional Retail’s Butt

We are at the dawn of a new era – and like the dinosaurs who just thought they were having an off day – many Aussie retailers aren’t going to know what’s hit them. In the coming months Amazon will start opening its online doors in Australia. And already locals are seeing an impact.

Australia’s favourite retail curmudgeon, Gerry Harvey, has seen $100M disappear from his personal balance sheet as the likelihood of his prediction that the internet would never amount to much for retail is slowly being shown to have been somewhat less than correct.

As we recently reported, it has been speculated that Myer could lose anywhere up to 55 per cent of its earnings over the next five years.

The old Myer cafeteria is going to need to sell a lot of bad coffee and “Frog in a Ponds” to cover those kinds of losses.

Credit Suisse says Myer could be just the tip of the iceberg with Harvey Norman, JB Hi-Fi, Supercheap Auto, Rebel and Amart Sports, BigW, Kmart and Target all tipped to see revenues smashed.

Officially, Amazon hasn’t made any announcements concerning its retail presence here. But recruiting for hundreds of workers suggests they’ll be here sooner rather than later.

It will be interesting to see what the retail industry does when Amazon arrives – I think we can dispense with the “if they’ll arrive”.

Past form suggests we’ll hear a lot of bleating and whining. Just like the brouhaha over forcing customers to pay GST on products that are purchased from overseas, I suspect we’ll see Gerry Harvey and his mates buying new megaphones so we can listen to them complain about how they’re battling.

Amazon’s founder Jeff Bezos has been quoted as saying “your margin is our opportunity” when undercutting prices in new markets the company expands into. And when you look at the Credit Suisse report, it’s pretty obvious who the potential victims of Amazon’s expansion are. 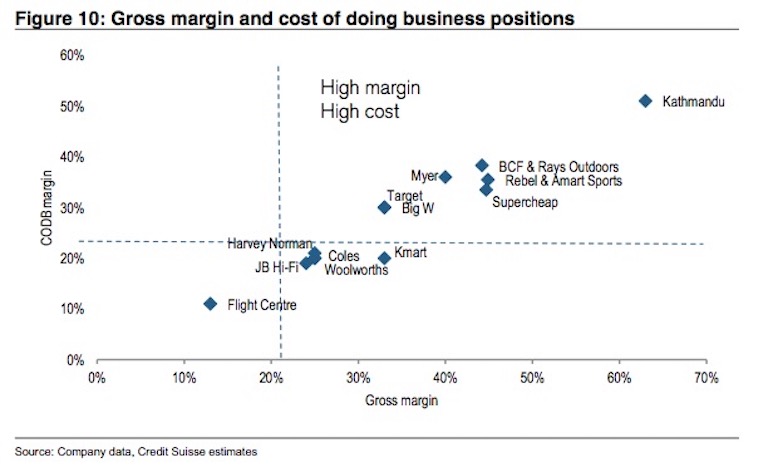 According to the report: “Almost anything that can be put in a small box is likely to be vulnerable to Amazon”.

I wonder if the local retail establishment will get into the ACCC’s ear and try to push for a predatory pricing argument, saying Amazon’s purpose is not to compete but to eliminate or damage a competitor.

The ACCC has some specific guidelines regarding predatory pricing. The argument is that predatory pricing will force competitors out of business, leaving the “winner” to scoop up the market and then raise prices as there’s no competition to keep them honest.

I’m not a lawyer but given Amazon is a new entrant to the Australian market, it would be tough to make a case that a multi-billion dollar empire like Myer or Harvey Norman would be a victim of predatory pricing.

The reality is online retail has been a thing for close to 20 years. I suspect major retailers are looking at the bookshop business and see a model for what could happen to them.

My local shopping centre – which was recently expanded and is now pretty huge has just three bookstores – a Dymocks, a QBD with cut-price books and a niche store with some less commercial titles and a decent selection of graphic novels.

A decade ago, when the centre was much smaller, there were at least six I can remember.

Having many years to prepare for this inevitable storm hasn’t been enough for them to prepare their operation for a lower-margin world.

Amazon is coming. Local retailers can do their best King Canute but they aren’t going to stop the flow of customers rushing like a rising tide to Amazon and other overseas retailers that see the opportunities here.

Anyone who travels to the US will know we pay a premium for many goods here. Those days are coming to an end.

Amazon Shopping Down Under: What We Know So Far

Amazon shopping is coming to Australia - and it aims to have stores in every Australian state by 2017. If you have shares in Coles or Woolworths you should be worried. If you own an independent grocery store you should be very worried. Here's everything we know about Amazon's shopping strategy and how it will affect they way we buy goods in Australia.

The Ten Best Books Of 2016, According To Amazon

This year has been a great year for reading. But if you’re wondering which new books are worth your time, consider Amazon Books’ annual list of the best books of the year. We've also included links to all ten books so you can purchase them in time for Christmas!

An Amazon spokesperson has told Lifehacker “The person who made this statement, Brittain Ladd, left Amazon in February after just two years. He was never involved in our planning for Australia and has no actual knowledge of our plans. His comments do not reflect our views. Our focus is on providing the best shopping experience we can for customers all over Australia.”