It’s hard to think about email without putting a G in front of it. Despite Gmail’s renown as one of the best email services on the internet, Microsoft’s Outlook.com has spent the last few years building itself into a competent competitor. In today’s showdown, we put these two behemoths of email to the test.

There are a ton of email services, but a few have risen to the top. After Outlook.com absorbed Hotmail, Gmail and Outlook.com became the two biggest email services on the internet, together totalling over a billion users. Their approaches to managing your email are similar, but there are some pretty distinct differences in features.

For our comparison, we’ll be looking at the apps themselves, and not necessarily the underlying service underneath. Technically, you can import Gmail messages into Outlook and vice versa, but what we’re interested in is how these services actually work in practice.

Gmail Set the Organisation Standard, But Outlook Has Caught Up 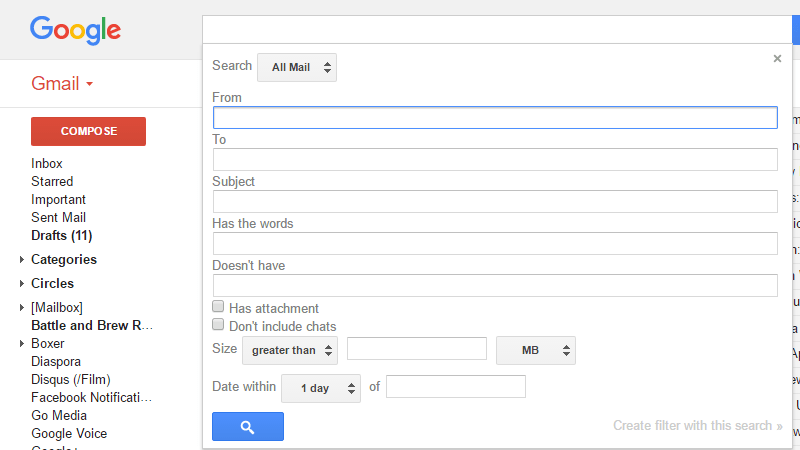 Gmail also uses a priority inbox system to automatically find messages it believes are important to you. Emails are deemed “important” based on who you email, which messages you open, what you interact with and other criteria. You can also manually mark an email as important to help it learn.

Outlook’s approach to organisation is a little more complicated. For starters, the site uses folders as the primary method for organising your messages. By default, the left-hand pane shows a list of default folders, and you can create your own to organise your messages. You can pin emails so they remain at the top of a folder which is sort of but not exactly like Gmail’s stars. Outlook also has a feature called Clutter that finds emails you probably don’t care about and moves them to a separate Clutter folder. This lets you focus on your important messages and clear out the junk in one sweep.

You can also add categories to your email, which function much like labels do. You can add categories and use those as criteria for rules (more on those in a second). However, by default, Outlook doesn’t show you your categories in the navigation pane. To see any categories, you have to navigate to Options > Layout > Categories and manually pick which categories are shown. On the one hand, this makes it hard to clutter up your inbox unless you choose to — in contrast, Gmail shows all labels unless you specifically hide them — but on the other, it was a pain to even find the option.

Similarly, Outlook’s filter counterparts are called Rules (a term borrowed from the desktop version of Outlook). When you’re viewing an email, you can create a Rule to filter messages like it. Otherwise, Rules are once again buried in Outlook’s Options menu. They have many of the same options as Gmail’s filters, but they’re not quite as robust. For example, you can’t automatically send a canned response based on a filter. However, for most situations, Rules and filters are pretty comparable.

Outlook Has a Streamlined Interface, But Gmail Has Several Layouts to Choose From 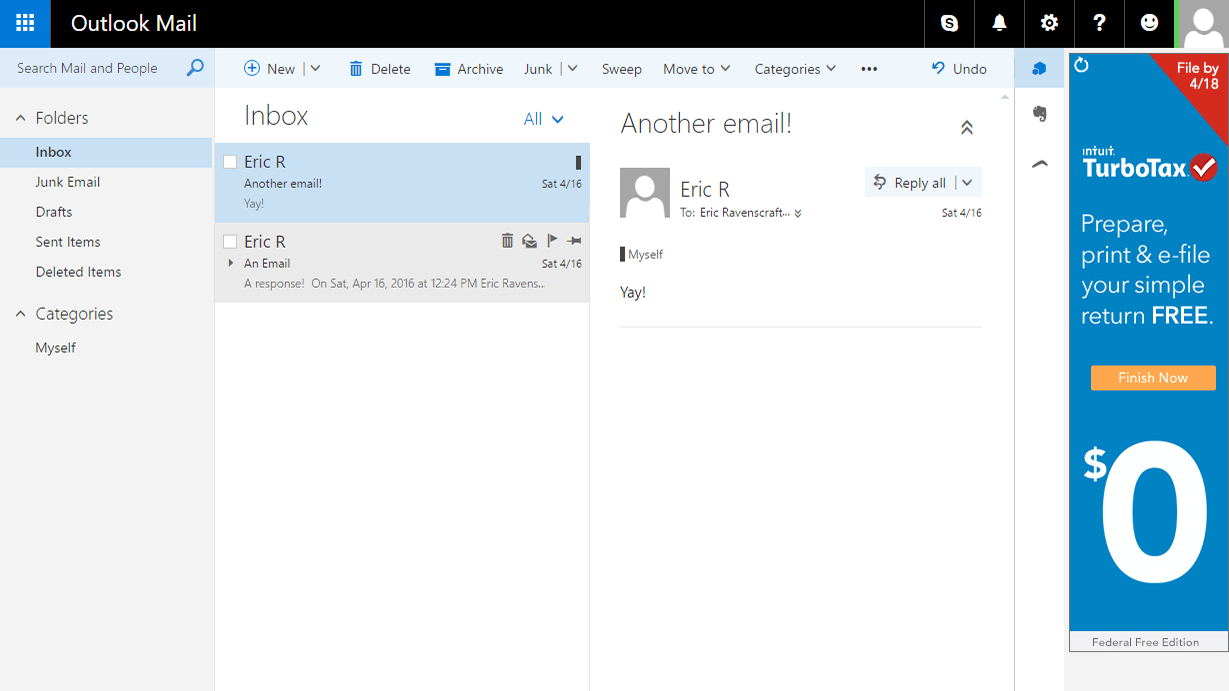 I’m really excited about emailing myself.

I’m really excited about emailing myself. Google famously likes to play around with Gmail’s interface, so you have a few different options to choose from. Most recently, Google introduced a tabbed inbox view that sorts your email into categories including Social for messages from social networking sites, Promotions for advertisement emails, and Updates for auto-generated emails like order confirmations or bills. For some, this was a godsend. Others wanted to turn it off immediately. On top of that, Google’s also experimenting with Inbox, a third alternative interface for Gmail. Inbox treats your email more like a to-do list where you mark each message as “Done” rather than as “read.” You can snooze emails until later and bundle related messages together. Between Inbox, Gmail’s tabbed inbox, and the normal priority inbox interface, you have many options for choosing how to present your email.

Gmail also has a ton of tweaks hiding in the Labs section of its settings. Here you can enable a ton of useful tweaks like a dedicated Mark as Read button, a Preview pane so you can read emails without leaving your message list, and canned responses. While many of these features are awesome tweaks that not everyone may want, some are also basic features that you probably shouldn’t have to hunt down to enable in 2016.

Outlook on the other hand uses a basic three panel design and sticks with it. On the left side, you can click on different folders and categories to navigate. In the middle panel, you’ll see a list of emails in that folder. Click an email and you’ll be able to read it in the third pane on the right. For anyone who’s used an email client that isn’t Gmail, it should look very familiar. Outlook doesn’t have as many options for customising its interface in major ways as Gmail, but that’s not necessarily a bad thing. You can still tweak the basics like where your display pane shows up, or what order messages appear in a conversation with Outlook.

Finally, both Outlook and Gmail have ads, though they appear in very different ways. In Gmail, you’ll see a couple of ads that look like regular emails under the Promotions tab. You can avoid them by turning off the promotions tab, disabling the tabbed inbox altogether, or using Inbox. In Outlook, the ads are full banners on the side of the screen. The only way (aside from ad blockers) to disable them is to pay $US20 ($26)/year for Ad-free Outlook. The silver lining, though, is that Microsoft promises Outlook won’t scan your email to target ads.

Gmail Has a Few Bonus Tricks, Outlook Has a Whole Store of Them 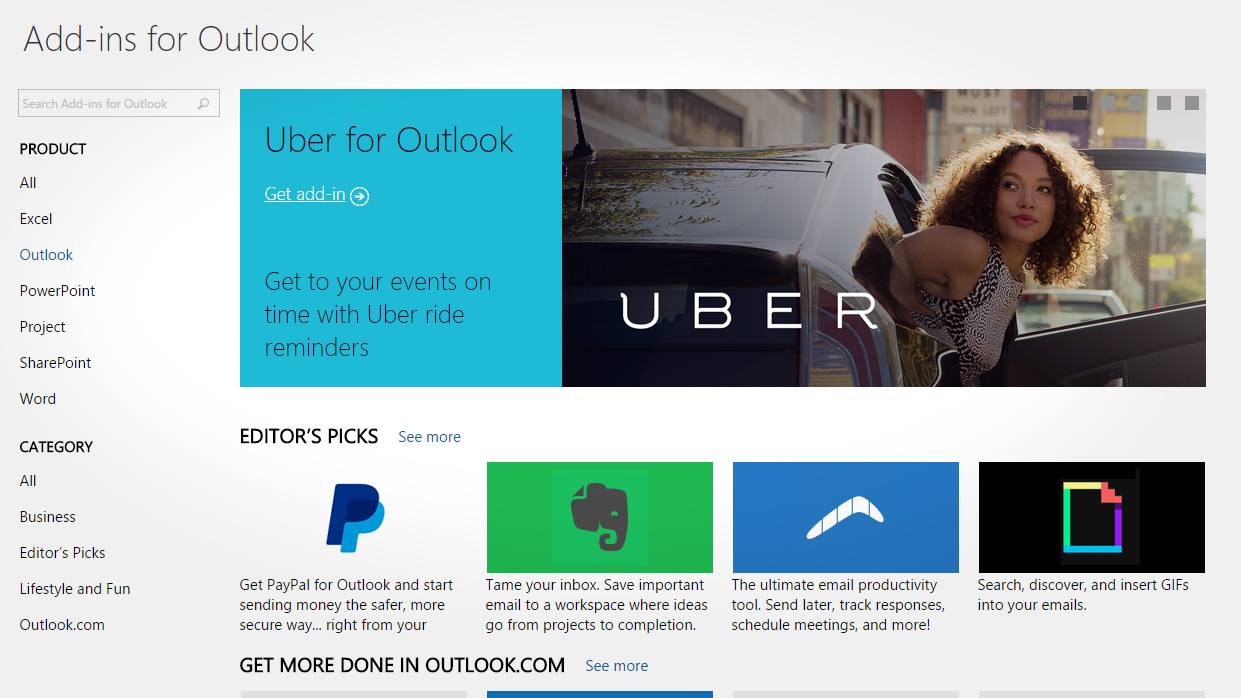 No email client is an island. Google and Microsoft have a ton of other products built directly into their email client that make them pretty powerful. For simplicity, we’ll only include the services that you can use without actually having to leave your Gmail or Outlook tabs directly. However, each company has quick shortcuts to tons their other products, so part of your decision may be determined by which apps you use regularly every day.

In Gmail, Hangouts lives as a panel on the right side of the screen. Every chat you open will open along the bottom of your window. You can open minimise them while you’re checking your email and pop them open to reply to messages. You can also open a Tasks window that lives next to your open conversations so you can create a basic to-do list throughout the day. You can set due dates and provide descriptions for each task, but that’s about it. In the Labs section, you can enable a mini-calendar widget so you can see a very abbreviated view of your agenda for the day. That’s about all you can add to Gmail without downloading extensions to add services on top of Gmail.

In Outlook, you can use Skype for messaging just like Hangouts in Gmail. There’s also a Tasks section you can open from the shortcut menu in the top-left corner of Outlook. Unlike Gmail’s mini-Tasks widget, you can provide a ton more details for your tasks, including hours worked, set reminders for a task, and attach files from OneDrive to a task.

On top of this, Outlook has a bunch of add-ins that expand your inbox’s functionality. For example, you can open the Boomerang add-in to set a reminder to come back to an email after a few hours or days. You can open the Evernote add-in to save an email to one of your notebooks. There are over 100 more add-ins in the Office Store that can add new features to Outlook.

The Verdict: Gmail’s Friendly to Power Users, Outlook Is Awesome For Office Workers

In the past, Gmail was the de facto standard for how to manage your email online. While Microsoft has done well with Outlook on desktops, it’s only in recent years that its web email products have caught up. Now, it’s a toss up as to which one is better, but each has their strengths.

If you like endlessly tweaking or experimenting with your email setup, Gmail is for you. Google has not shied away from bold and controversial new designs that change how you use email. Sometimes those experiments work, sometimes they don’t, and everyone has their preference. Even if you’re not a fan of change, Gmail’s foundation of powerful filters, customisable labels, and automatic sorting is solid and allows a ton of room for tweaking your inbox to bend it to your will.

Outlook, on the other hand, is perfect for anyone who likes a streamlined workflow or uses a lot of professional productivity apps. Outlook puts the most relevant, important buttons right where you can see them and lets the power users go digging for options if they really want to. It also has deep ties not only to the rest of Microsoft’s Office apps, but plugins like Boomerang, Evernote, and more. While Google’s no slouch in the productivity department, Microsoft’s Outlook feels the most at home in an office setting.