Domino’s Is Launching A Self-Driving Pizza Delivery Robot. No Really

The future is pizza. Last night, Domino’s Australia unveiled DRU — the world’s first commercial autonomous delivery vehicle. This isn’t a fictional marketing campaign; it’s a bona fide robot that can do everything from navigate fences to talk to customers. We were given a sneak peak of the first prototype in Brisbane, which will be the testing ground for this cutting-edge delivery system. Here’s everything you need to know!

This is an April Fools gag, right?

Wrong. Domino’s has been secretly working on this project for the past eight months at its local innovation lab. Dubbed DRU (Domino’s Robotic Unit), it is an autonomous delivery vehicle built in collaboration with Marathon Robotics; an Australian technology startup that specialises in robotic targets for live-fire army training. It’s essentially a $30k military-grade robot refitted for pizza delivery.

The DRU unit is fully autonomous and can currently reach speeds of up to 20 kilometres an hour. This makes it suitable for footpaths, trails, bike paths and bridges — but not roads or highways. It will therefore initially be limited to neighborhood deliveries.

DRU uses a LIDAR sensory system that allows the unit to detect obstacles in its path and change its route accordingly. It measures objects and distance by illuminating them with a laser light. Each unit also comes equipped with traditional sensors that detect obstructions at close range, just like a robot vacuum cleaner.

It weighs approximately 190kg and has a maximum height of 1185mm (922mm with the compartment closed.) The body is constructed of ABS and urethane plastics, the lenses are made using PMMA (acrylic) plastics and the internal chassis is finished using aluminium and mild steel. It is water tight and weather proof.

When a customer orders a pizza, the DRU unit will travel unassisted to their address using the aforementioned sensors and GPS tracking technology powered by Google Maps. While the unit is capable of navigating fence lines and driveways, customers will be required to complete their orders on the kerb.

Entering a unique mobile phone code will activate the robot’s locked storage compartments which contain the customer’s goodies (the robot cheerfully chats you through the process throughout). There are separate heated and chilled compartments for hot foods, drinks and desserts. To ensure the system meets food service hygiene requirements, both compartments will be removable for cleaning and disinfecting purposes.

The current prototype has a battery capacity of 20km which is well within Domino’s average delivery radius of 3-5km. However, it’s only capable of delivering an “average size” pizza order — in other words, your future parties will continue receiving boring human deliveries. Boo!

According to Domino’s CEO Don Meij, DRU is safer than human drivers. “One of our inspirations for DRU is safety — it seems pretty crazy to us that we use one-and-a-half tonne vehicles to deliver a few hundred grams of pizza,” Meij explained. When you remove all that fast moving steel and potential for human error, the number of delivery-based injuries should actually go down. 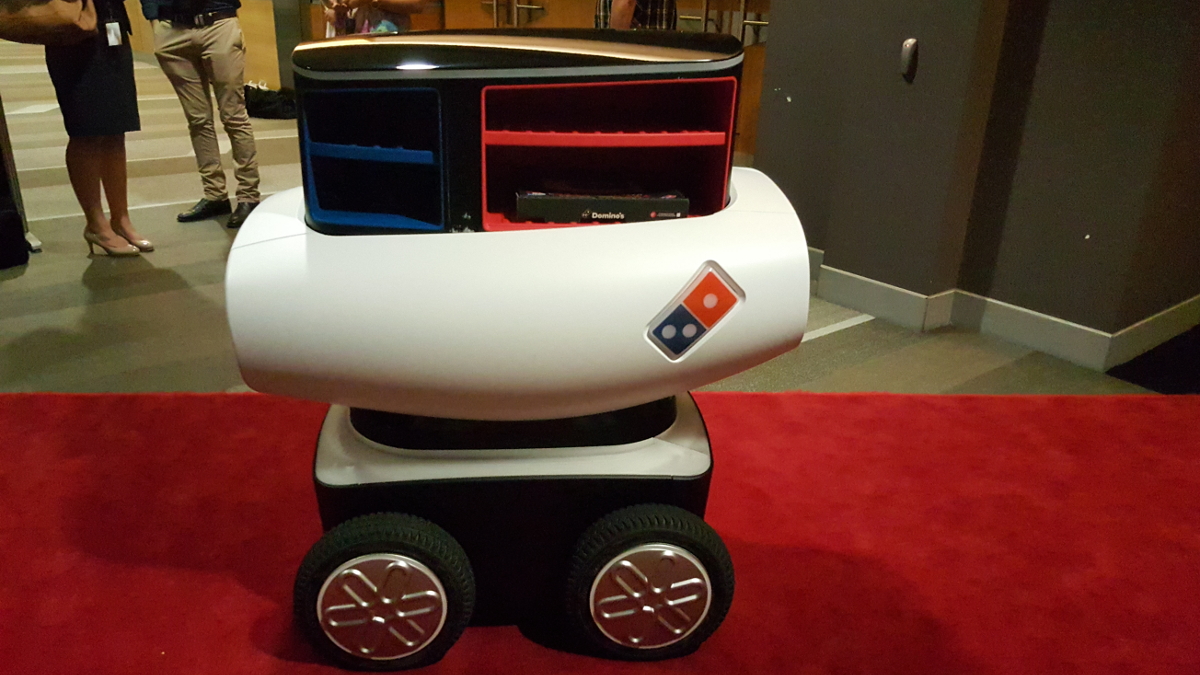 Domino’s has been conducting field tests with DRU in a number of restricted streets approved under special permit by the Queensland Department of Transport. These “semi-autonomous” delivery trials complied with current road regulations and proved to be successful.

When will it be on the roads?

According to Domino’s, DRU will be making appearances in stores within the next six months. However, it will take approximately two years before units are ready for our roads. “It’s a genuinely autonomous robot today, but some of the technology on the AI side still has to lift,” Meij explained.

“He’s able to stop and sense and won’t hit things, but [it] needs to be more foolproof. For example, he’s not currently aware of how big he is on top which can be a problem when he spins.” 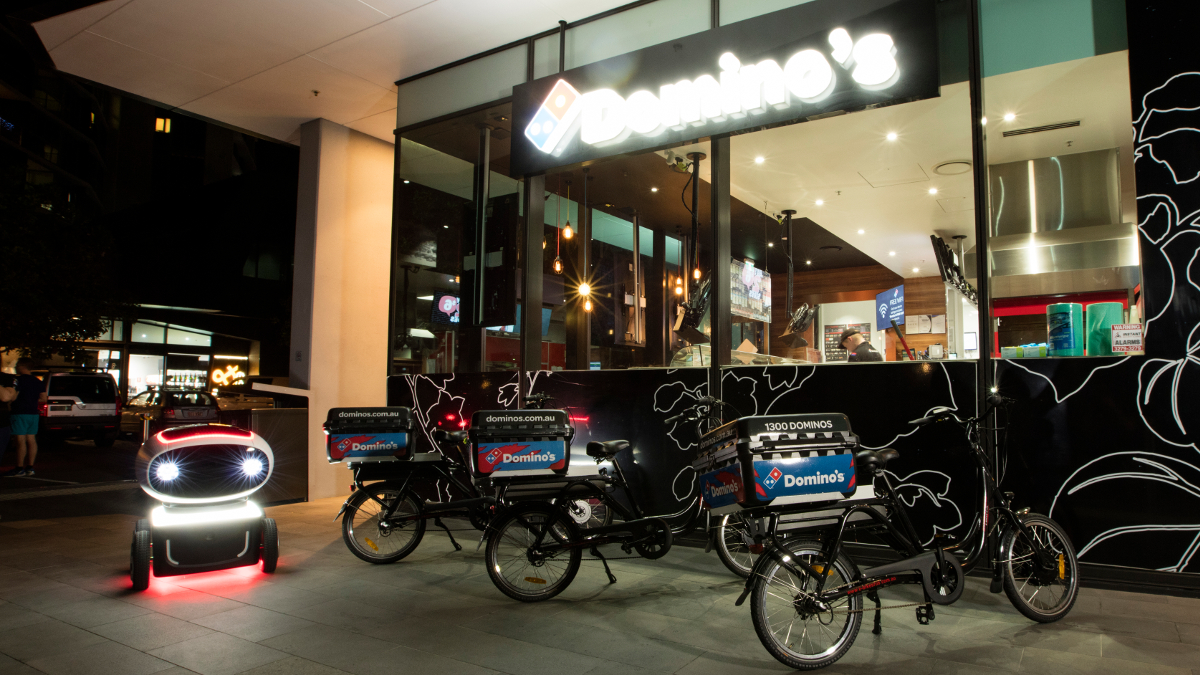 In addition, there are various legislative restrictions that need to be overcome. Simply put, Australian road rules are exceptionally tough to navigate: it’s exceedingly difficult to get a bike helmet approved over here, much less a self-driving robot.

Nevertheless, Meij is confident that state governments will be on board within the next couple of years. The company is currently working with the Queensland Department of Transport of Main Roads (TMR) to identify how to safely allow DRU to utilise roads and footpaths.

In addition to the aforementioned compartment locks, each DRU unit will be festooned with IP cameras which means any thefts or acts of vandalism will be sent straight to the cloud. “We think there’s no doubt things like that will happen,” Meij admitted. “We have to go through that journey.”

What about our jerbs?!!?

According to Meij, the DRU unit won’t replace traditional (read: human) pizza deliverers. There are simply some places the technology won’t be able to reach; most notably highways and distant locations.

“I think drivers are going to be around for a long time,” Meij said. “Currently we have three types of deliveries: electric bike, motobike and car.” DRU will simply be another member of the delivery team. 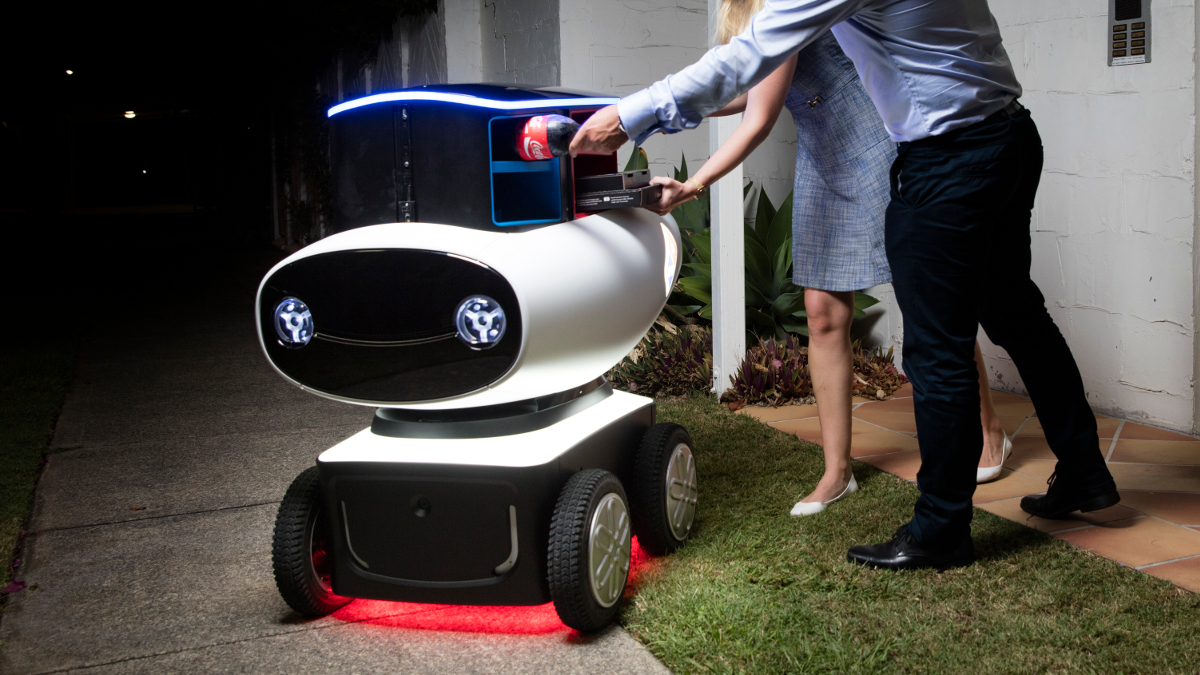 Meanwhile, Domino’s commitment to homegrown technology will actually boost job creation in the fields of engineering and robotics.

“Whoever does this first will have a significant advantage,” Meij explained. “If we’re not careful, Australia will become a host nation of technology rather than owning technology. My fear is that we just licence everything from Silicon Valley and London and so on, when we could be part-owning it.”

Anything else I should know?

The robot might be gay. The male-voiced prototype joked about having dated Dexter from Perfect Match in the ’80s. This is just fantastic.

We caught some video of DRU in action during the unveiling event. Unfortunately, we weren’t filming when it rolled into position but we did get a good shot of the compartment opening to serve us a pizza. Check it out below!