Why Deadlifts Are Worth The Hype, And How To Do Them Safely

Deadlifts: you either love ’em or are afraid of ’em. To the casual eye, this exercise looks like a great way to throw out your back (and you certainly can if you’ve got terrible form), but they’re actually one of the best and most practical movements in or outside of the gym. Here’s what you need to know about this not-so-deadly exercise.

When you’re performing a conventional deadlift, you are essentially lifting “dead weight” off the ground and then putting it back down on the ground. You can guess how this carries over to practical uses in your everyday life: moving some heavy furniture, picking up bags of dog food, shoveling snow, and pretty much doing any movement that requires bending over (which, in actuality, is a hip hinge, but we’ll get to that shortly) and picking something up. Truly, the benefits are myriad and, let’s be honest here, badass AF.

Deadlifts Make You a Badass. Period.

Maybe you’re not terribly impressed by the ability to lift groceries more easily. Then how about the fact that deadlifts translate to being better at sports, moving better, improving your posture, and building a wickedly strong-as-hell body? (And if you want some inspiration, here’s 40-something-year-old “Huge Jacked-Man”, a.k.a. Wolverine, rocking this 186kg deadlift. So awesome.)

The deadlift that brought me into the 1000lb Club.

Deadlifts provide such a wide range of benefits because they’re a total-body compound exercise that mimics movements in real life and in sports (extension of hips and knees), and uses so many different muscles at the same time. A lot of people initially think that deadlifts emphasise the lower back or legs, and they’re not exactly wrong. The deadlift works both, plus the muscles that run along your entire backside (collectively called the posterior chain): from your trapezius muscles that sit at the base of your skull all the way down to your heels, and more.

Even long-distance runners could benefit from getting better at deadlifts and including strength training in general. According to running and strength specialist Jon-Erik Kawamoto, CSCS:

Middle- to long-distance runners tend to develop weak gluteals compared to other leg muscles, like the quadriceps, due to the muscles involved in the running stride and the fact that [running] is such a repetitive motion. Therefore, runners can benefit greatly from performing deadlifts, as deadlifts can help “bring up the glutes” and help correct for this strength imbalance. Plus, strong glutes are associated with a lower injury risk among runners.

Deadlifts Are Safe Unless You Do Them Wrong

Contrary to what your instinct tells you, deadlifts are safe compared to many other movements in the gym. You’re not going to get crushed under weight, for one thing. The issue arises when your form is bad, as Jon-Erik notes:

The primary concern with deadlifts is performing the exercise with a rounded spine. This results in the stress of the exercise being placed on the spine structures and ligaments rather than to the back, hip, and leg muscles.

It turns out that picking things off the ground is a lot more technical than what most people would instinctively do. Think about picking up a dollar bill from the floor: you’d probably bend your lower back and get back up using your lower back again, placing a lot of undue pressure on your spine. Your back likely won’t give out from the weight of a dollar bill, but add about 50, or even 136kg to the mix and you can see where things can go horribly, horribly wrong (sup, herniated disc!).

In reality, picking things up is less reliant on bending your back and far more on bending your hips. This flexion at the hip is referred to as the “hip hinge.” The hip hinge is not a movement that comes naturally to most of us, at least initially, mostly because we’re rarely ever taught to move this way. What’s more, many people confuse this movement pattern with an actual squat. Here’s Tony Gentilcore, a strength and conditioning coach at Cressey Performance, on the difference between the hip hinge versus a squat, from an article on his blog:

When doing a hip hinge, you want to imagine trying to push your butt directly out towards, say, a wall behind you while still keeping your back straight, or “neutral”, and core braced — both of which keep your spine from rounding or caving in — with a slight bend in your knees (you should feel a slight stretch in your hamstrings). Ultimately, it looks like this: 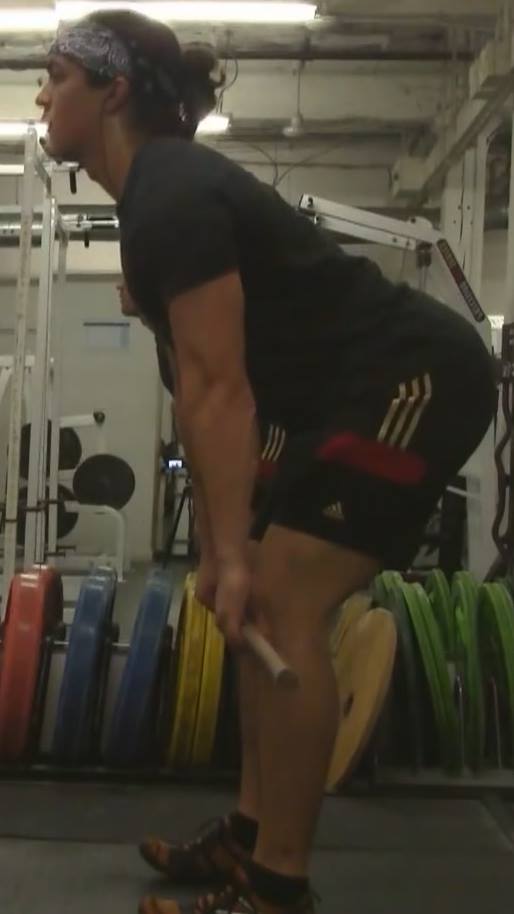 Tony delves into great detail here on helping you learn and “groove” the hip hinge pattern into your movement, including this drill to help you get started:

Deadlifts are just like any other exercise: correct form and technique are tantamount to your own safety. Most gym-goers would benefit from getting better at deadlifts, but not all. Jon-Erik recommends that those with a history of low-back and/or joint issues, like arthritis, avoid heavy deadlifting, or deadlifting altogether.

If deadlifts cause you pain, no matter if you’re being properly supervised and/or done with as perfect a form as your body lets you, stop doing them. At that point, they aren’t worth it! Alternatively, you can try using the trap bar or substitute them completely with just as awesome exercises, like hip thrusts, cable pull-throughs, glute bridges (weighted or bodyweight), and kettlebell swings.

Which is Better: Sumo or Conventional?

In the fitness world, wars have been waged and nations have fallen over this hotly contested topic of “best” deadlift stances. Should you pull “conventional” or “sumo?” First, let’s go over the differences in a nutshell:

The differences seem simple enough, but there are a few rules of thumb that often obfuscate this discussion, including:

So, which should you pull? In Greg Nuckols’ excellent article on the topic, he pretty much tells people to “train both hard for a while, then stick with whichever is strongest and most comfortable.” It’s very straightforward and wise advice. It’s not easy for someone else to simply tell you which lift would make you most comfortable — you alone know what your body is telling you.

How to Incorporate Deadlifts Into Your Workouts

Since deadlifts work so many muscles, they can pretty taxing and tough to incorporate into a program. Strength and performance coach Omar Isuf, who also makes helpful fitness YouTube videos, recommends:

The frequency depends upon your goals and experience level. The more intense you go with deadlifts, the lower the total volume (amount of work) you’d do.

For beginners, it is fine to start deadlifting 1x per week. After you feel comfortable with the movement, most individuals train it 2x per week. Typically, one day heavier (going for sets of 5 or 3) and another day for volume (lighter loads for more reps).

Additionally, Jon-Erik notes that he prefers to do deadlifts on the days he trains his legs or back. Either way is fine and mostly depends on how you’ve split your weekly workout. Also, because a deadlift is a “big movement”, Omar recommends that you do them at the beginning of your workout session, like as your first or second movement, when you have the most energy to perform the movement well.

As for additional equipment, like gloves, straps, and a weightlifting belt, save your money — you don’t need them early on. You should avoid going heavy on deadlifts until you’ve nailed down your form. Omar also notes that using a belt too early and often can reinforce bad form.

Common Mistakes Lifters Make, and How to Fix Them

By now you hopefully understand that deadlifts have perks, but you have to do them correctly to cash them in. The best way to make sure is to have a trained professional coach you through it, or shoot a video of yourself doing a deadlift and have a professional critique your form.

Here are just a few of the common things people tend to do wrong and what can be done about them:

All in all, the deadlift is a nuanced movement with many moving parts. It’s impossible to paint over the things that could go wrong with a broad brush. What’s important is that you work your way up to a full deadlift, with mastering the hip hinge as your priority and getting properly taught by someone who really knows what he or she is doing.

Other Resources to Help You Master Your Deadlift

In the words of Jake from the cartoon Adventure Time, “Sucking at something is the first step to getting sorta good at something.” It’s the real icy truth of anything in life, especially fitness. Practice, in the gym and outside of it. See a box lying around? Use the hip hinge technique and lift it! See a dime on the ground? Hip hinge and pick it up! The more you practice, the more you can work on good form.

Meanwhile, here are other resources to help you get comfortable with the deadlift:

Finally, here’s Daisy Ridley (Rey, from the new Star Wars) smashing a 80kg deadlift. Enjoy, and may the force be with your deadlifts.

I don't know if #fitnessfriday is a thing(?!) but HERE'S MINE! Lifting 80 kilos/176 pounds feeling like an absolute boss. ??? Initially I had to pack on some muscle to look like a desert scavenger, but have continued working out because it makes me feel really good. The female form is beautiful in all shapes and sizes, whether that's athletic, straight up straight down or curvy; you just have to do what makes you feel good, try not compare yourself to other people and LOVE YOURSELF!!! As it stands I'm of the athletic variety so I'm gonna keep pumping those weights ??? #girlswholift