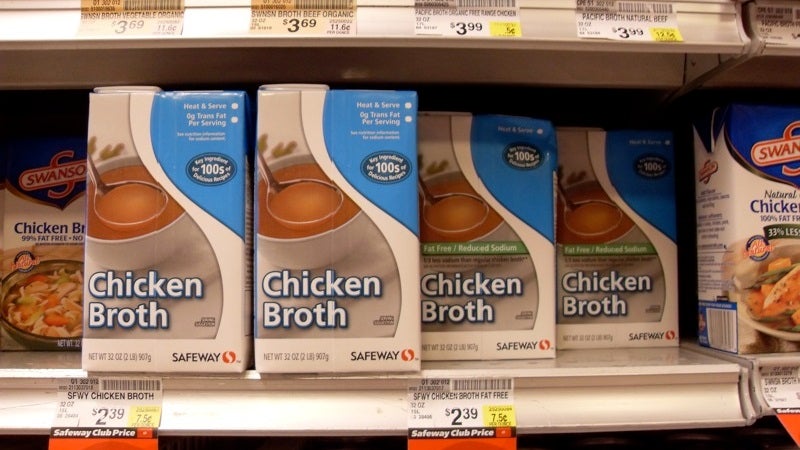 Even if your dish calls for store-bought beef stock or broth, you might be surprised to learn that you'll get a much better flavour if you use the chicken version instead. Here's why you might want to skip out on beef broth from now on.

According to J. Kenji López-Alt at Serious Eats, canned or boxed beef broth is only required to have a 135-to-1 ratio of moisture to protein. That means that most beef broth you buy in the store contains almost no beef at all, with yeast extracts providing most of the savoury flavour. López-Alt suggests you always go with chicken broth instead:

In most recipes we've tested, boxed chicken broth will provide far better flavour than boxed beef broth, even for traditionally beef broth — based dishes like beef stew or onion soup. This is because, despite the fact that there is no minimum protein requirement set by the USDA, most boxed or canned chicken broth contains around 60 parts liquid to 1 part protein, twice as much as in beef broth.

More protein means more flavour. Of course, homemade beef broth is still plenty flavuorful, so this only pertains to the store-bought variety. If you can't make your own, however, and absolutely must have a beef flavour for your dish, López-Alt recommends you use Better Than Bouillon Beef Base instead of store-bought beef broth. Otherwise, grab your favourite chicken broth at the store and use it in all of your favourite recipes from now on. You can learn about more ingredients you should be trading out at the link below.