Make Chicken Broth On The Stovetop Or Pressure Cooker, Not The Slow Cooker 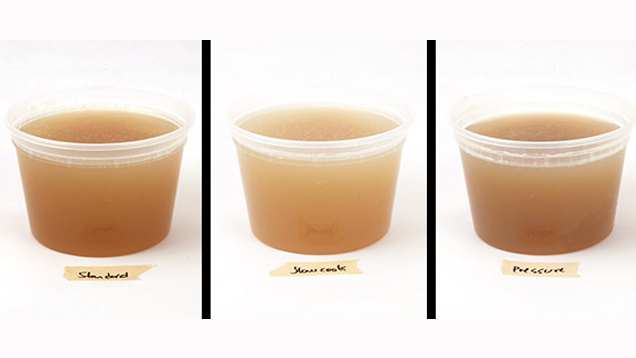 If you want the most flavourful, full-bodied chicken stock you can make at home, do it on the stove or with a pressure cooker, and save your slow cooker for something else.

That's the recommendation from J. Kenji Lopez-Alt on Serious Eats after testing the three methods — judging each broth's clarity and colour and having a group of tasters evaluate each broth. In the photo above, from left to right, are the standard, slow cooker, and pressure cooker results.

The slow cooker broth ended up paler, thinner, and with less flavour, and Kenji explains that the temperature of the slow cooker is a little too low to effectively extract all the flavour compounds or convert the chicken's collagen to texture-improving gelatine. It's true that the slow cooker makes clearer broth that you don't need to skim, but if you want better flavour or body, try one of the other methods.

(If you finely grind the chicken parts or add some gelatine, however, you might be able to improve the slow cooker broth. We'll need another test for that.)

Ask the Food Lab: Can I Make Stock in a Pressure Cooker or Slow Cooker? [Serious Eats]