Australia’s huntsman spiders are the stuff of myths and nightmares. But, they also hold a super interesting place in the pantheon of Australian wildlife. So, if one somehow catches your eye, or sneaks up on your shoe (brrr), try not to squish it to its death.

I study the behavioural ecology of these remarkable spiders. Elsewhere in the world I don’t tell people that I study spiders for a living, but in Australia, I confess that I do brag a little about being a huntsman specialist.

Of those, approximately 95 species are found only in Australia. All of these are probably descended from a single common ancestor that immigrated from Papua New Guinea or elsewhere in Southeast Asia.

Huntsmen are big spiders. There are a few relatively small Aussie species, such as the tiny (non-endemic) amazingly camouflaged lichen spider (Pandercetes gracilis). But many of the endemics are sizeable animals that can weigh 1-2 grams and may be as big as the palm of your hand.

The world’s second largest species, the massive Golden Huntsman (Beregama aurea) from tropical Queensland, weighs over 5.5 grams. An adult’s forelegs may stretch 15 cm, and they lay egg sacs the size of golf balls.

Anyone who has chased a leggy huntsman knows that they are exceptionally fast. We have been measuring the running speed of the endemic huntsman species.

These are some of the fastest spiders recorded in the world. The slow pokes, the rotund but colorful Badge huntsman (Neosparassus species), only run 16 body lengths per second.

Perhaps it just wants a hug?

Huntsmen are long-lived for spiders, with most living for about 2.5 years. Although some other primitive spiders (such as tarantulas) can live up to 20 years, most other spiders live less than a year.

All huntsman spiders are active at night, emerging from their retreats to forage for insects and other invertebrates, and occasionally small vertebrates. They are ambush predators, generally sitting and waiting for prey to come close before running and leaping on it.

Huntsmen don’t use webs, but use a combination of vibrations and vision to locate their prey. Consider the huntsman a small workforce of natural insect exterminators in your house and garden.

During the day, most huntsman prefer to rest in retreats under bark, crevices, or other protected areas. This is why so many people encounter the spiders under the sun visors of their cars or behind curtains in their homes, because those are perfect tight spaces for a sleepy spider.

Depending on where you live, different huntsman species tend to wander inside. In Canberra, I have no idea where the medium-sized Isopedella pessleri actually live in the wild, because they are most often caught indoors.

In order to mate with virgin females, male huntsman often search out females that are not quite mature and guard them for long periods. All huntsman females are attentive mothers who actively guard their egg sacs and new born offspring for around three weeks. But for most huntsman species, these are the only social interactions they experience in their entire lives.

But the social huntsman, Delena cancerides, lives in complex family groups up to 150 strong, led by a dominant matriarch. A single mum establishes a retreat under bark of a dead tree. Then her offspring from one to four clutches remain with her until they reach sexual maturity at almost a year old. Peeling off bark to find a family of these spiders can be quite a shock.

These social huntsman aren’t found in our homes, although I’ve heard of them establishing colonies under window shutters. One long-lived colony was in a backyard where the bark retreat had been affixed in place by a laundry line.

Our research shows that having older siblings in the group brings big payoffs to younger animals, as they can share prey with their more capable older siblings.

Why should large spiders remain at home with mum and siblings, when they can clearly fend for themselves? It turns out that there simply aren’t enough suitable under bark retreats for D. cancerides to occupy. We find that in most habitats, sufficiently large retreats are rare.

As a result, there is strong competition among D. cancerides for each retreat, and larger females can displace smaller females. We believe that by remaining in the protected shelter of home until they are young adults, the spiders are larger and more competitive in the battle over bark retreats which are an absolute necessity for raising their own young. 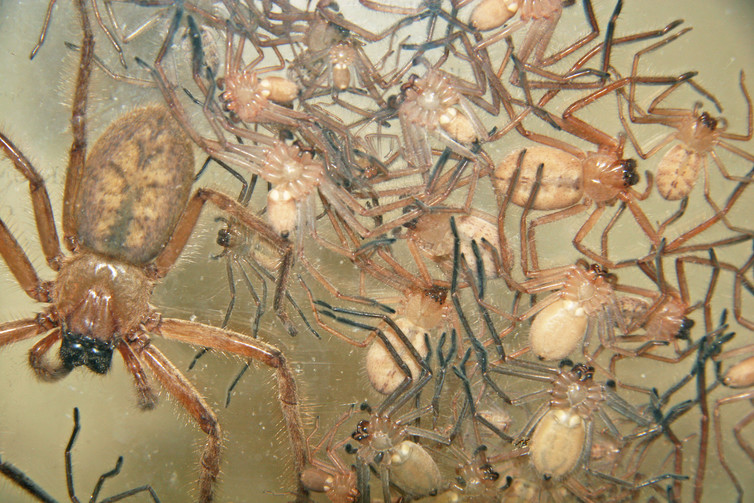 The social huntsman spiders, Delena cancerides, are found under the bark of dead trees. The mother (on the left) may have four clutches of young who remain with her until they reach sexual maturity. This means that spiders of all sizes interact with each other through their development.

Don’t throw a wobbly and hurt a huntsman

What should you do if you do find a big spider in your car or living room? First, get a grip! She isn’t going to hurt you.

Second, find a take-away container, scoop the spider into the container and release it outside. Huntsman spiders almost never bite humans since they rely on speed to escape most predators. When they do bite, most bites are quick defensive nips without injecting venom.

In 14 years of studying Aussie huntsman spiders, I’ve handled many thousands of individuals and been bitten only 11 times when I (mostly) deserved it. Their fangs are big enough to break skin, but the venom rarely has much effect.

An exception is the Badge huntsman which is reputed to have a more potent venom, so simply use a container to move them.

It might be a hard one to do if you’re scared of creepy crawlies, but treasure your huntsman spiders if you can. They deserve a place alongside koalas and kangaroos as iconic Australian wildlife even if they aren’t as cute or cuddly.