How To Make ‘Rick And Morty’ McDonald’s Szechuan Sauce

It’s no secret that Rick and Morty fans are obsessed with McDonald’s “Szechuan Sauce”, a limited edition Mcnugget dipping sauce that came out in 1998 to promote the Disney film Mulan. If you want to find out what all the fuss is about, this DIY recipe is pretty damn delicious.

Inspired by its appearance on the cult TV show, McDonald’s decided to resurrect its Szechuan Sauce in the US back in 2017. Unfortunately, quantities were extremely limited, leading to instances of theft, violence and huge unruly crowds. Police were dispatched to multiple outlets.

Fights broke out at @McDonalds over the limited supply of #szechuansauce Police had to intervene at several locations! #RickandMorty pic.twitter.com/KEpqhtl5d8

Cops are at Wellington McDonalds where tons of angry people lined up for hrs for Rick and Morty Szechuan sauce only to learn they had none pic.twitter.com/3T272osid4

From my friend who dared to get The Sauce.

Simmer that shit for a solid 5 minutes, stirring pretty much constantly. The brown sugar helps it keep the proper consistency, so it’s important to use. Play around with the recipe to your taste. Might want more or less balsamic vinegar. Might want more or more Plum Sake. I’d definitely recommend you make it several times to figure out your own flavour.

Our fast food correspondent in the US, Claire Lower, made a batch and conducted a taste test with 10 Chicken McNuggets. Here are the results: 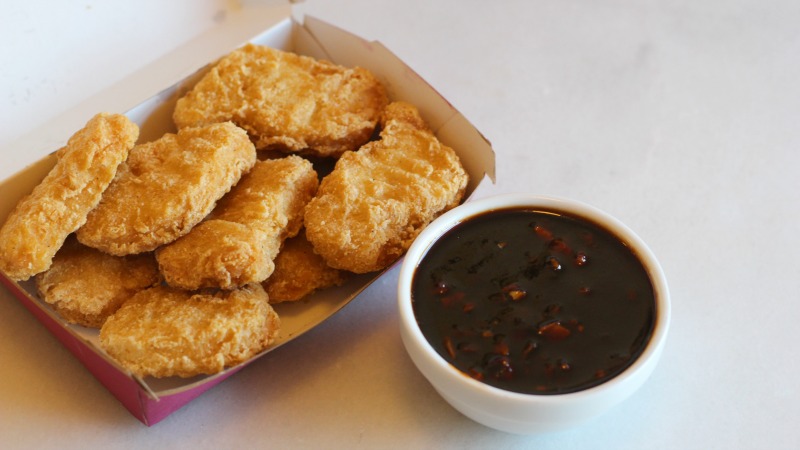 “It was very good,” she said. “It was sweet, salty and tangy, with a good bit of heat. It did not, however, seem like a sauce McDonald’s would have put out, as it tasted too much like food.”

To give the sauce a more familiar “factory” flavour, Claire took a cue from this video from Binging with Babish, and added a tub each of McDonald’s Sweet & Sour and BBQ, plus a little extra soy and sriracha. “Now I had a sauce that tasted like it belonged under the golden arches,” Claire explains. “It was still sweet, sour, salty and spicy, but everything had been muted a bit by all the corn syrup, which made it a much better mate for the bland meat product that is the McNugget.” Too easy! Just be sure to close any kitchen windows prior to making – otherwise some rabid Rick and Morty fans might break down your door and rob you.