The Best New Features To Try In The Apple Maps Redesign

Apple Maps is back with a brand-new edition, one that the company hopes makes it more appealing (and competitive) compared to the Google Maps’ of the app world. Not only does the new Apple Maps look a lot better, thanks to all the details about buildings, landmarks, and terrain that Apple has packed in, but Apple is doubling down on privacy for your mapping experience.

There’s plenty to like about Apple Maps nowadays. Let’s start with its accuracy. Artur Grabowski ran a pretty geeky test back in 2018 that pitted Apple’s service against Waze and Google Maps. After comparing the estimated times provided by each of the mapping services for 120 total trips, Grabowski found that Apple Maps was the most accurate for estimated times—even though Google Maps, when tested, actually got him to his destinations slightly faster than Apple Maps and Waze.

Rather than relying on third parties for the data that fuels Apple Maps, Apple now creates its own (thanks to a fleet of LIDAR-equipped vehicles that have been steadily driving around the country, as well as satellite imagery and other sources). This should, presumably, increase the accuracy of Apple Maps’ directions. No promises, but I’d at least give it a try—especially around any major metropolitan areas.

As for all the other quirky features you can find in Apple Maps, here’s a quick roundup of some of our favourites—for newbies and returning, directionally challenged users alike.

Setting up your favourite locations (and collections)

It’s a no-brainer to add your home and work to Apple Maps—which makes it easy to pull up directions via the app or a quick yell to Siri. But you can also add all the other places you like to visit, too. Tap “Add” under Favourites, right below Apple Maps’ search bar, and you’ll get a list of suggested locations that you frequent. Pick one, or enter the address manually, and you’ll then be able to customise its label and pick a contact to notify whenever you start navigating there. 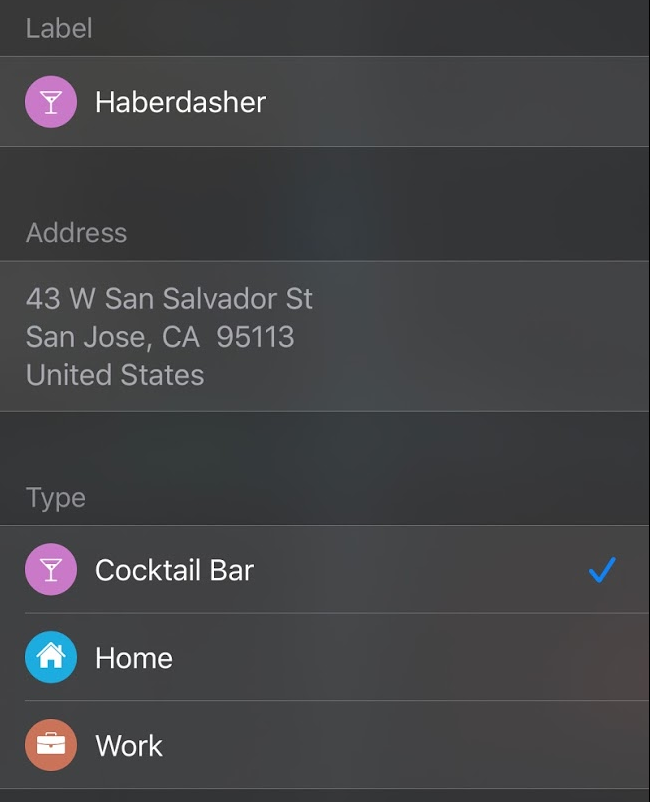 Once you have a handful of favourites, the best way to organise them is to drop them all into a collection. This can even be something aspirational: “bars I want to drink at,” for example. Creating a new collection in Apple Maps is easy—look for the “New Collection” link under the Collections section. Tap it, name your collection, tap “Create,” and then tap on the collection to start adding locations. 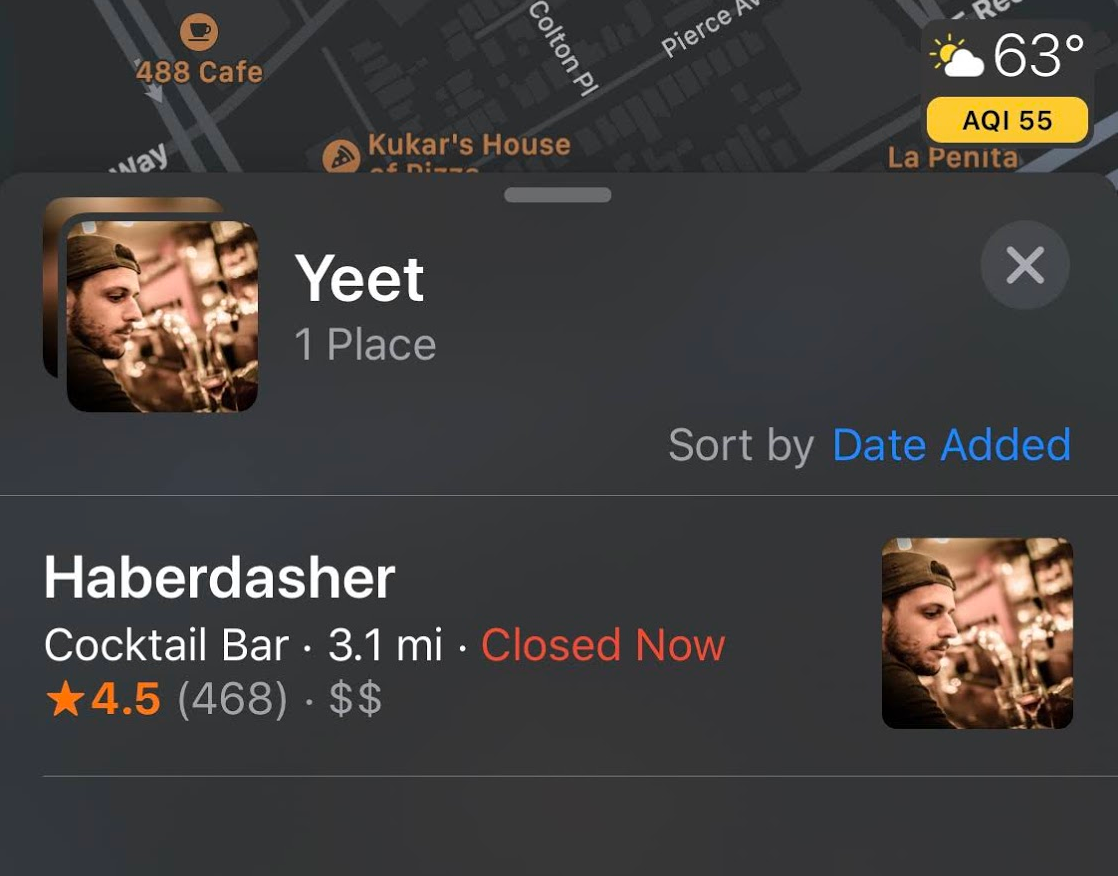 To share your collection with others—fellow bar-hoppers, as it were—simple swipe up and tap on the share button. (You can also swipe left on the specific Collection on Apple Maps’ main screen to share it.) Be sure to heed Apple’s warning before you pick an iPhone or iPad-using contact to share your list: 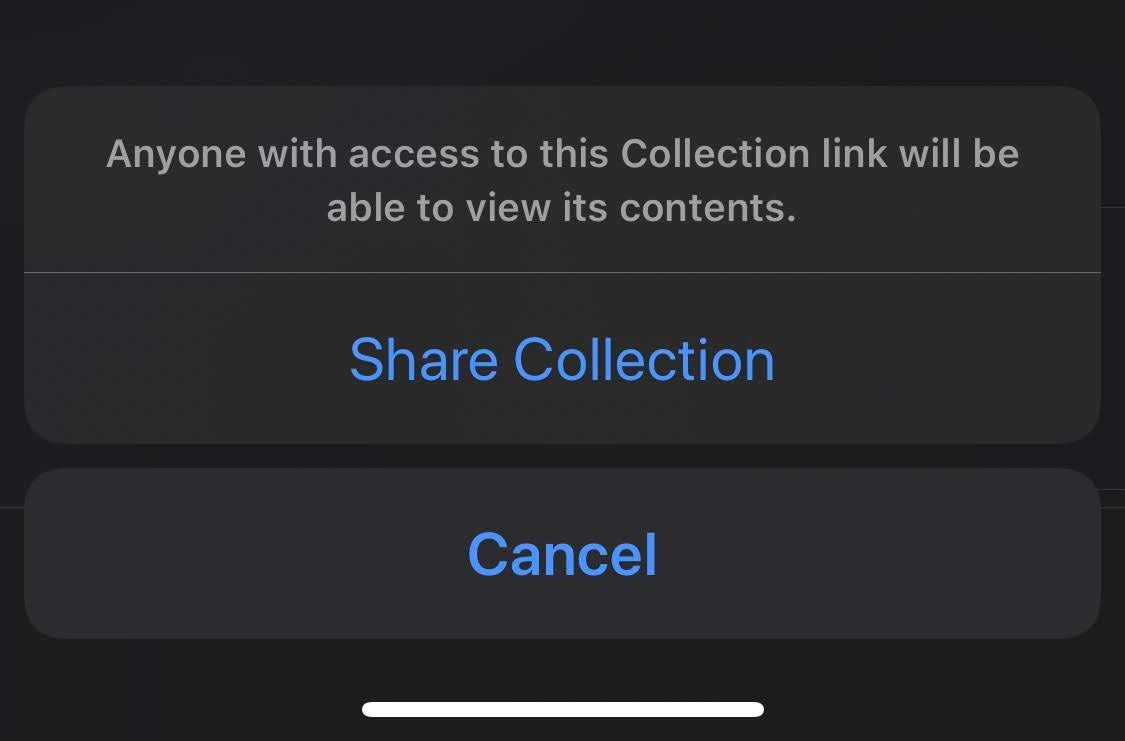 Unlike Google’s Street View, there’s no easy way to see all the areas Apple supports with Look Around—its “our car drove by and took a picture of this specific location” feature. If this is available, and you’ll likely have to zoom in to an area for this to happen, you’ll see a little icon of a pair of binoculars pop up in the upper-right corner. Tap it, and you’ll get a photograph of a particular location, which you can then pan around like a typical 360-degree image. Tap or move your finger around the map itself to warp to new locations—only those highlighted in blue, however, which might be tricky to see if you’ve zoomed out too far. 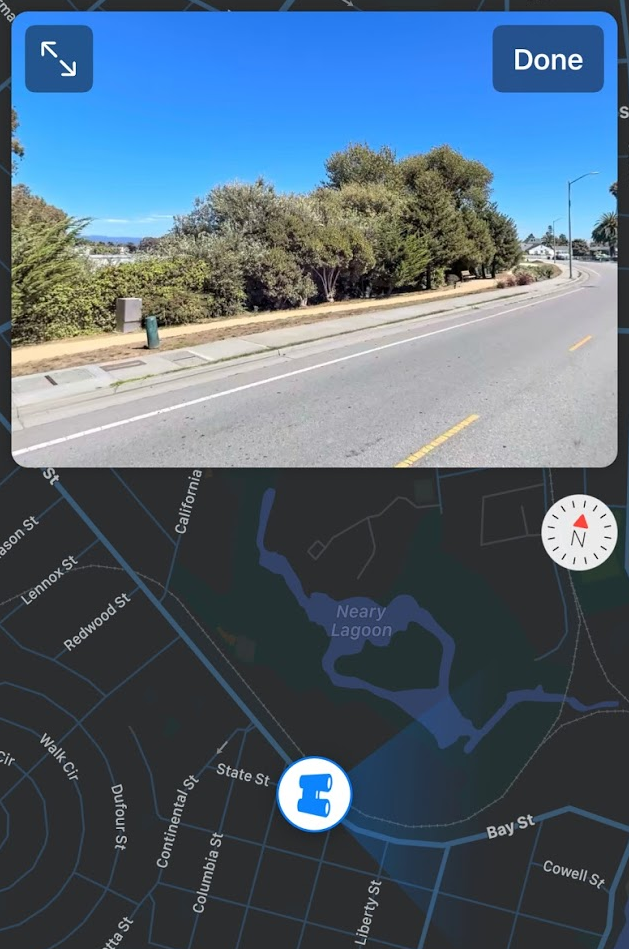 Tap into your daily forecast

This is a tiny trick, but a useful one. When you’re viewing a location in Apple Maps, note the small weather icon (and air quality index!) in the lower-right corner. Long-press on that to pull up the forecast for the next few hours in that location, as well as a general look at the current weather, expected highs and lows, and the chance of rain. 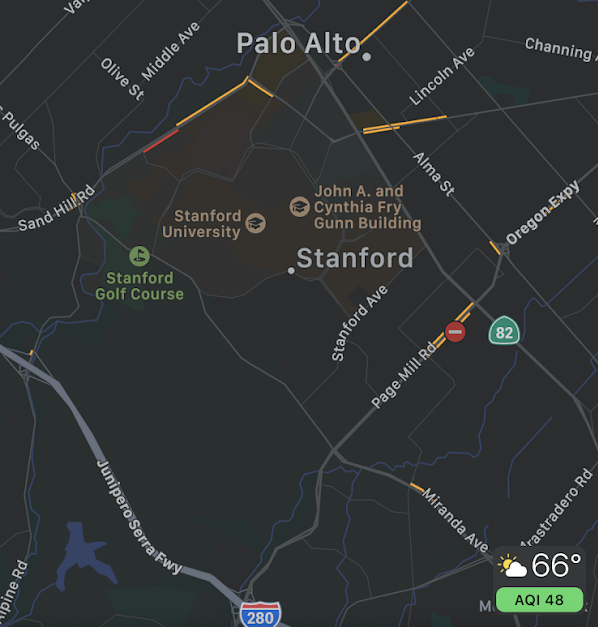 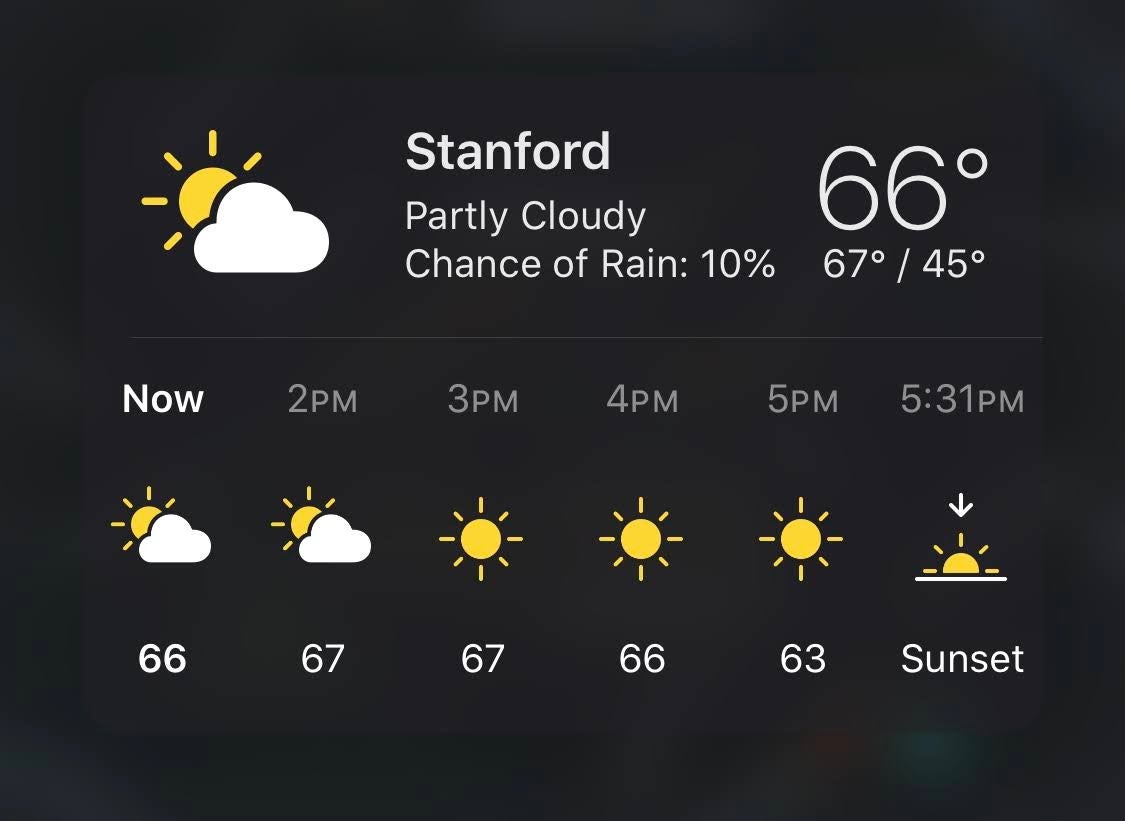 Figure out how to use mass-transit 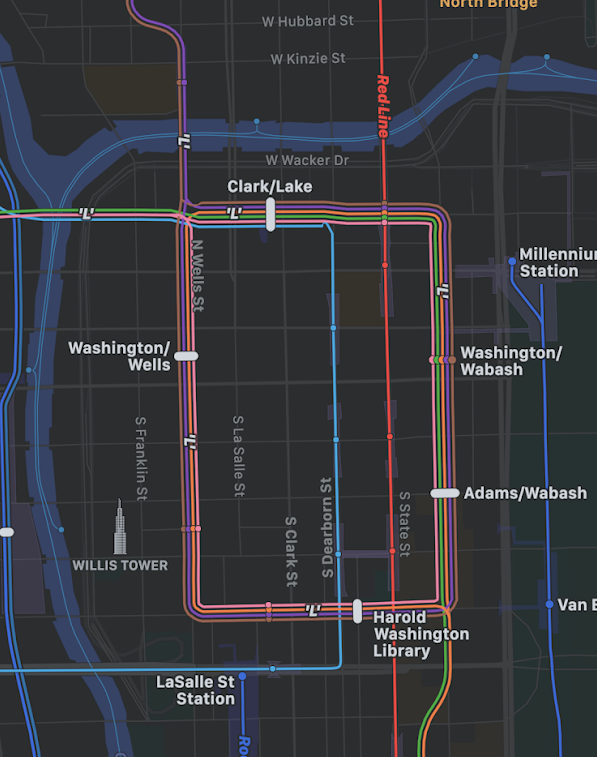 Go for an indoor (virtual) stroll

As you’re zooming around Apple Maps, you might notice that some locations have a blue “Look Inside” link below their names on the map. Tap it, and you’ll be able to “open” them up, virtually, to see what’s inside. If you’re looking at a shopping mall, for example, you’ll be able to see its layout—including all the stores packed inside, across however many levels tall the building is. While it would be even better if you could walk through the mall, virtually, using Apple Maps’ Look Around feature, at least you won’t have to go find one of those weird mall kiosk map things the next time you’re lost. 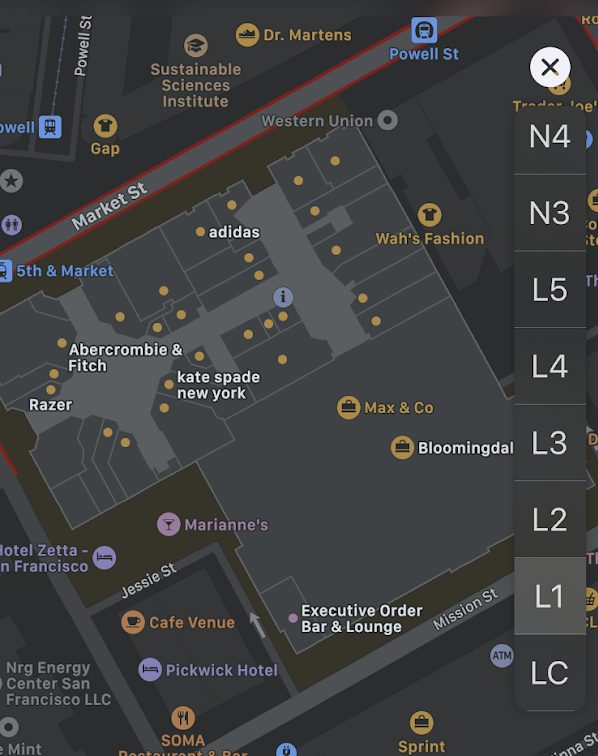 Silence (or summon) Siri to help with directions

Once you’ve picked a place to travel to, and you’ve loaded up directions on your iPhone, swipe your finger up from the bottom of your screen—the little bar just below the giant map. You’ll now see a few extra options to play with. You can add stops to your trip (a gas station, someplace to eat, or a coffee shop), and this is also where you can set how much you want Siri to help you out on your trip.

Tap on Audio, and you’ll be presented with four different volume options for the directions Siri plans to shout at you during your trip: silence, low, normal, and loud. You can also use this screen to have Siri automatically pause your podcasts or audio books when she gives you directions, if you don’t want your experience to sound weird. 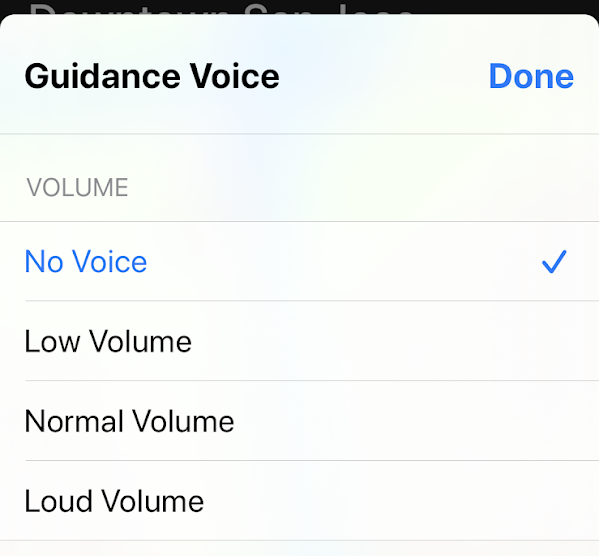 To set a default volume for Siri, you’ll need to jump out of the Maps app and pull up your Settings app. Tap on Maps, and then select Driving & Navigation. Look for “Navigation Voice Volume,” and select your preferred option.

While you’re here in Apple Maps’ Settings, you can also pick the transit type you’d like Apple Maps to use by default: driving, walking, or mass transit. You can also turn off mass-transit options you never want Maps to use as part of its trip-planning process by tapping on the “Transit” option.

Additionally, you can use Settings to switch between miles and kilometers in Apple Maps. You can also turn off its Air Quality Index and weather icon, and even whether you want Maps to help you out by taking note of where you parked your car. (As one who often finds himself lost in parking lots, why you wouldn’t want that feature is beyond me.)

One fun feature that Apple added in iOS 13 is the ability to send a contact automatic updates about your trip’s progress—useful for date night, for sure. Once you’ve received directions to a location and are staring at your travel map, swipe up from the “arrival / end” section of your screen. From there, tap on “Share ETA,” and pick a contact. 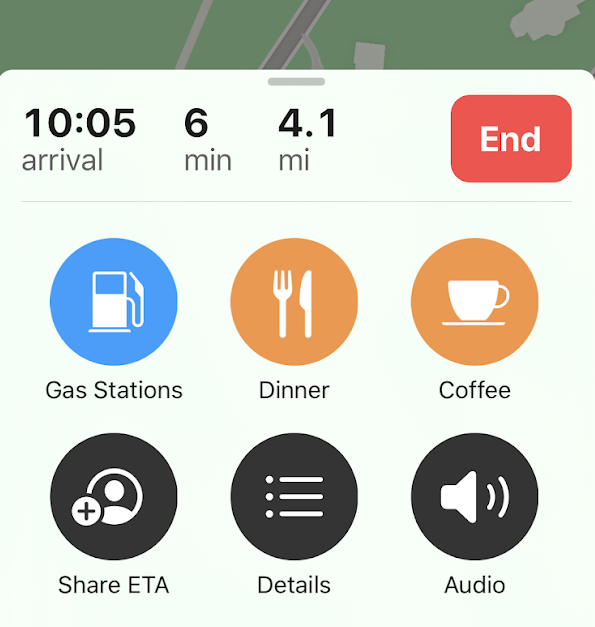 When you share your ETA to a location, your (iOS) contact will receive a little text message that tells them your, well, estimated time of arrival, as well as the name of the location you’re headed to. They can then tap on the location to also set up their own directions or to see where you are—useful if you’re both meeting somewhere. The feature works similarly for Android users, they just won’t get to tap through to pull up a map.

Go on a virtual flight

Some locations in Apple Maps—mainly large cities—come with a special “Flyover” feature that you might see when you search for it. For example, look up Chicago, Illinois and tap the Flyover button to be treated to a pretty 3D view of the city. You can manipulate what you’re looking at by moving your phone around or using pinch/expand gestures with your fingers. I find it easier to just tap the “Start City Tour” button, which is a lot less motion-sickness-inducing. It almost reminds me of Microsoft Flight Simulator. Almost. 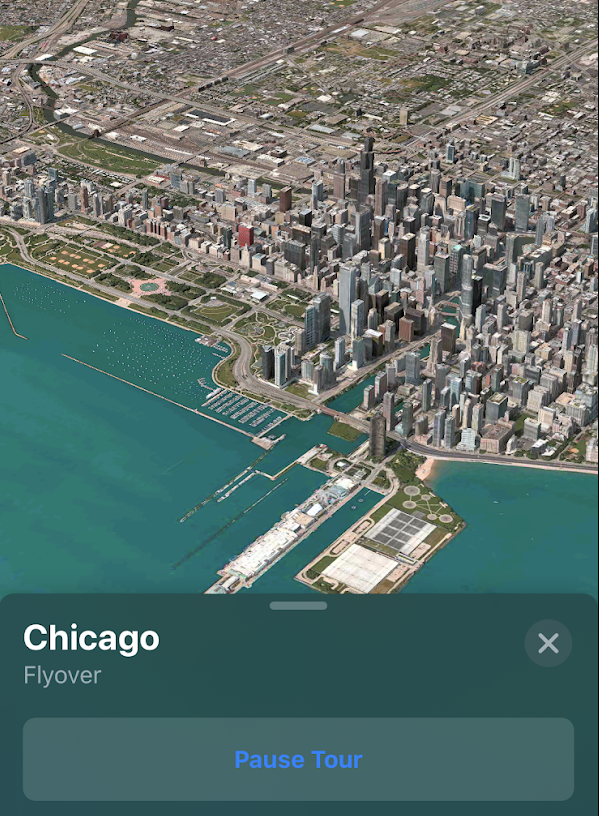