Android 10 — formerly Android Q — is starting to roll out to compatible handsets. Whether you have it or are waiting to get it, here are all the major features and changes worth knowing about.

From more robust security settings to improved Digital Wellbeing features, there’s a lot to look forward to from Google’s next major platform release which officially launches on Pixel smartphones this week. Here are the main highlights.

Now that we have an official name for Android Q, we’re getting very close to the official release of the new operating system. It's definitely hitting soon, but with an important caveat — just because Google releases Android 10 doesn’t mean that you’re going to get it (unless you own a Pixel device). Here's what you need to know.

The world is already in 5G hype mode, and even though it’s not available everywhere yet, there’s enough buzz that companies and manufacturers have started future-proofing software and devices for its impending arrival.

For its part, Google bundled in 5G compatibility in Android 10. Once you have this version of the mobile operating system, you’ll be able to connect to your carrier’s available 5G network provided your phone is outfitted with the necessary components.

Foldable smartphones may not seem like a thing right now, especially after the folly of the Samsung Galaxy Fold. But the next version of Android will be optimised to work with these next-generation devices. Some of the new features include app continuity, which lets you launch an app on the main screen then flip it open to continue what you were about to do, along with some better multitasking abilities that allow multiple apps to be paused and resumed at once. 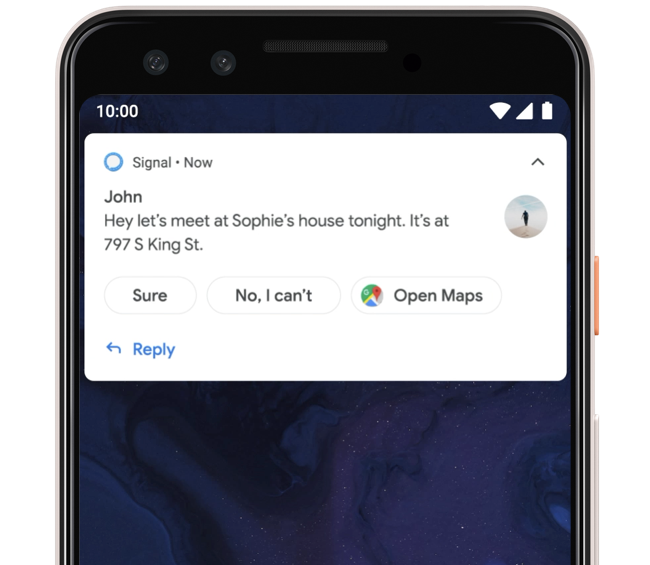 Smart replies will be able to tell when you need to navigate somewhere in Android 10 (Image: Google)

If you’re on version Android 8.0 or later, you’ve already experienced the practical utility of Smart Reply. This feature offers reply suggestions in the notification shade when you receive a message.

Once Android 10 goes live, the Smart Reply feature will be able to predict what you should do next. For example, if someone sends you a message with an address or the name of a restaurant, Smart Reply will offer a link to the Google Maps app to help you start navigating to that exact locale. It’s an easy way to move forward without having to copy and paste addresses, then tap around the screen looking for the next app you want to use.

The Cheapest Google Pixel 3a Deals In Australia

In the past, Pixel phones weren’t always the easiest to procure, especially at launch due to limited retailer support and notoriously short pre-order supplies. The newly announced Pixel 3a and 3a XL are expected to be more widely available - but only if you're buying it outright. Below is an overview of the newest additions to the Pixel smartphone line, and all the places you can buy them. 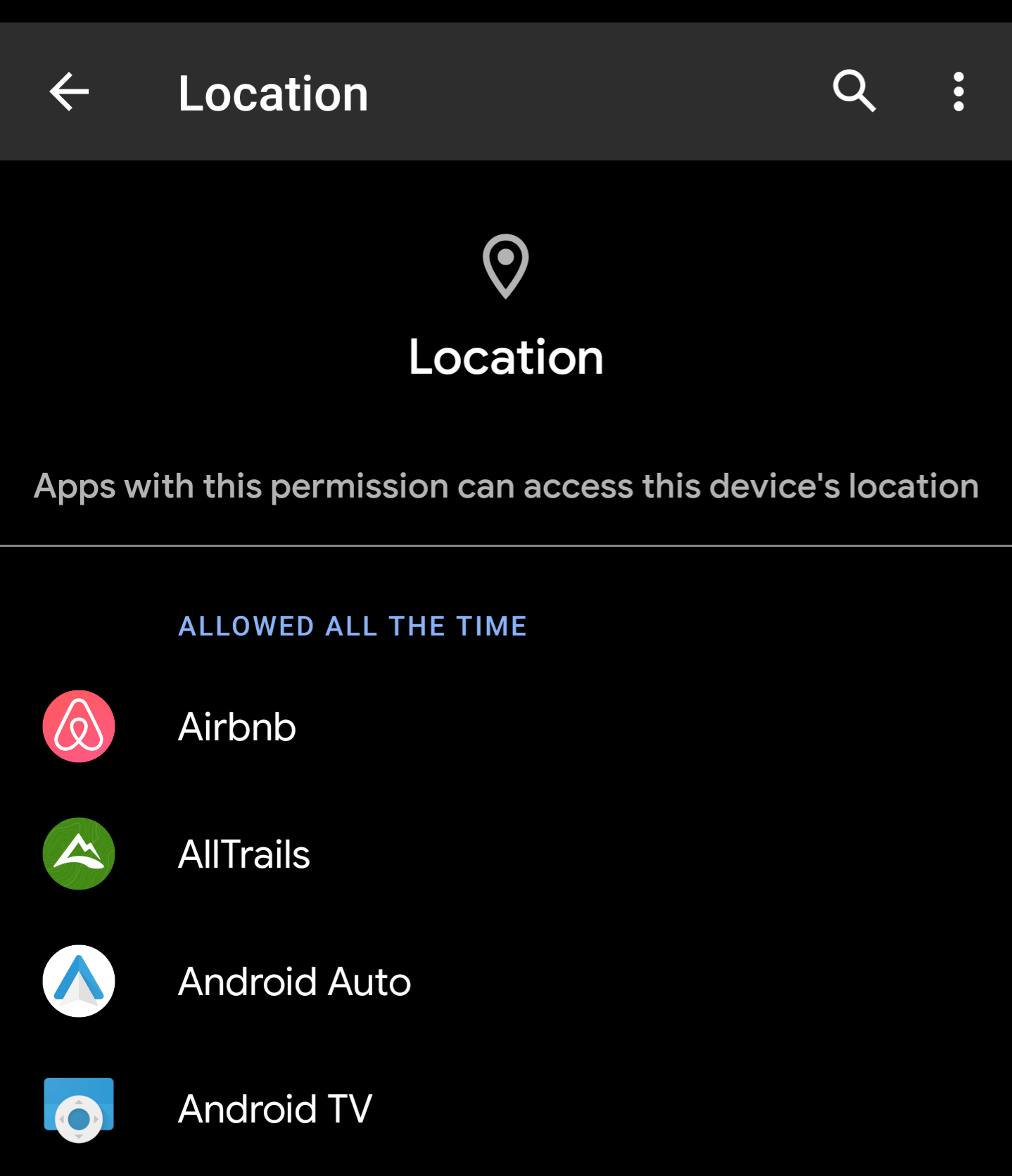 Robust permissions settings mean you can set when the system can access your location data. (Screenshot: Florence Ion)

Google claimed that nearly 50 features are coming to Android 10 related to security and privacy. We won’t know the extent of those changes until Android 10 goes live to everyone. However, Google hinted at some of the options you’ll be able to access in the Android settings panel, including a new front-and-center Privacy section, with a bevy of settings for controlling which apps and services have access to your data. There will also be a new Permissions option that will let you choose how and when data and other elements are shared with Google and other third-party apps.

The problem: When Google needs to make a minor update to the Android operating system, it’s not always easy to push it out to the masses. The solution? Project Mainline, a new initiative from Google to push out security patches to more phones by distributing updates directly through the Google Play Store—where you already get your app updates. Project Mainline will be limited in what it updates, but it’ll include things like network permissions, time zone data, and media codecs. 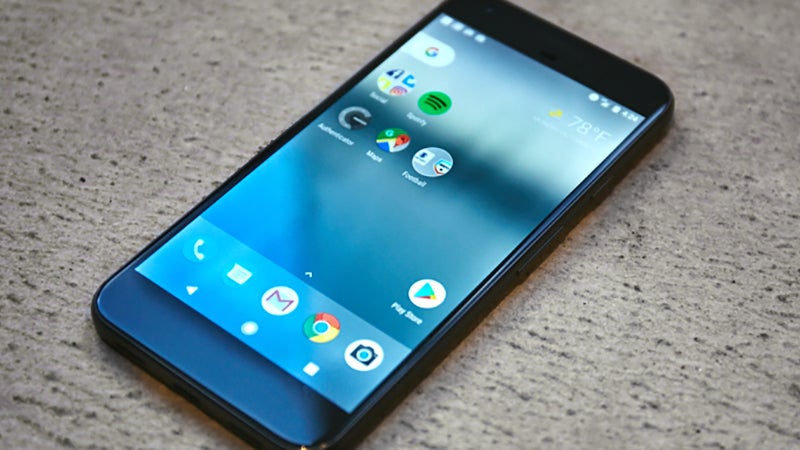 10 Ways To Trick Out Your Android Home Screen

One of the advantages of choosing a shiny new Android phone over those Apple handsets is the extra scope for home screen customisation. If you're stuck for inspiration or wondering how to get started, here are 10 ways of tricking out your home screen and other parts of the Android OS.

Are you feeling unable to focus with your smartphone going off all the time? Android 10’s Focus mode, part of Digital Wellbeing, lets you select the apps you find most distracting — messaging apps, news apps, apps constantly pinging you about daily deals — and silences them until you decide that you’re ready to deal. You’ll be able to choose which apps and which folks are allowed through when you’re trying to concentrate.

Alternatively, Focus mode works even when you’re not trying to focus, like when you’d rather zone out on a Netflix binge. The idea is to keep work and play separate so that when you’re avoiding your phone, you’re doing so altogether. And when you’re dodging work, you’re fully ensconced in what’s going on rather than who is notifying you in Slack.

Family Link will no longer be another app for parents to grab from the Play Store. Instead, it’ll come standard with Android 10 and will be available to customise inside the device settings. It will offer better controls for parents hoping to cut down on kids with a tendency towards rampant screen time. Starting with Android 10, you’ll be able to set up specific time limits for those apps your kid is too obsessed with to finish homework, along with “bonus time” for when you’re feeling lenient. 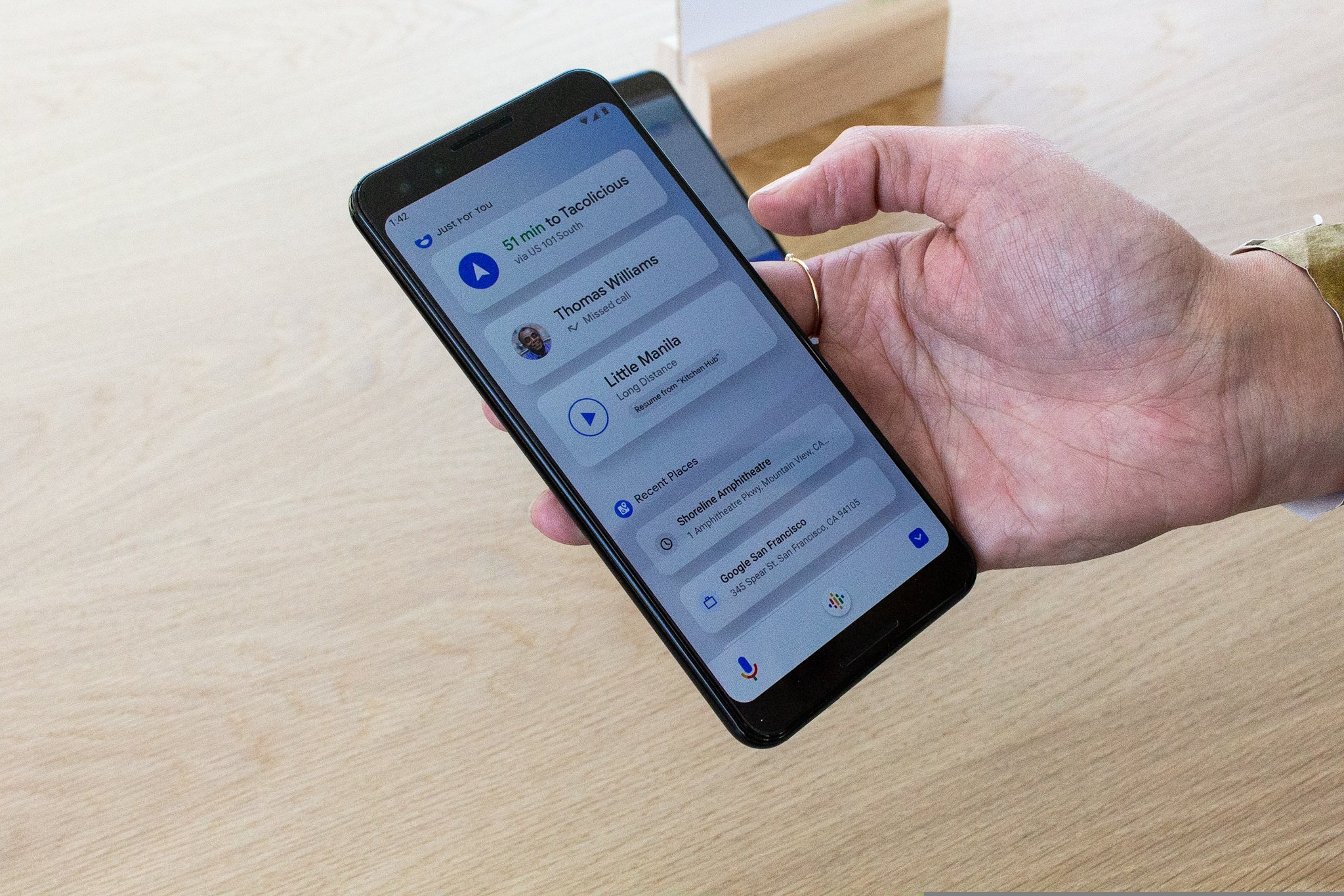 Android Auto and Android embedded into the car are getting a big makeover this summer. But perhaps the most significant will be the version of Android Auto on the phone, which will no longer be a separate app. Instead, you’ll have to invoke it through the Google Assistant, so you can say something like, “Hey Google, let’s drive” to pop up the new optimised driving mode. The new driving mode features a slicker interface, with all the information you need within a short scroll rather than hidden behind another menu.

Find something to eat

Google Lens isn’t entirely specific to Android 10, though it is a part of the Pixel’s camera app. A new feature coming up the pipeline will help you do things like figure out what to eat at a new restaurant, without having to ask anyone, “What’s good here?”. With the help of Google Lens, you’ll be able to snap a photo of a physical menu, and Google will highlight the most popular items at that particular locale based on its reviews database. Google Lens will also be able to split a bill or calculate a tip after you snap a photo of the receipt and read signs and other text for people who can’t read the printed language. 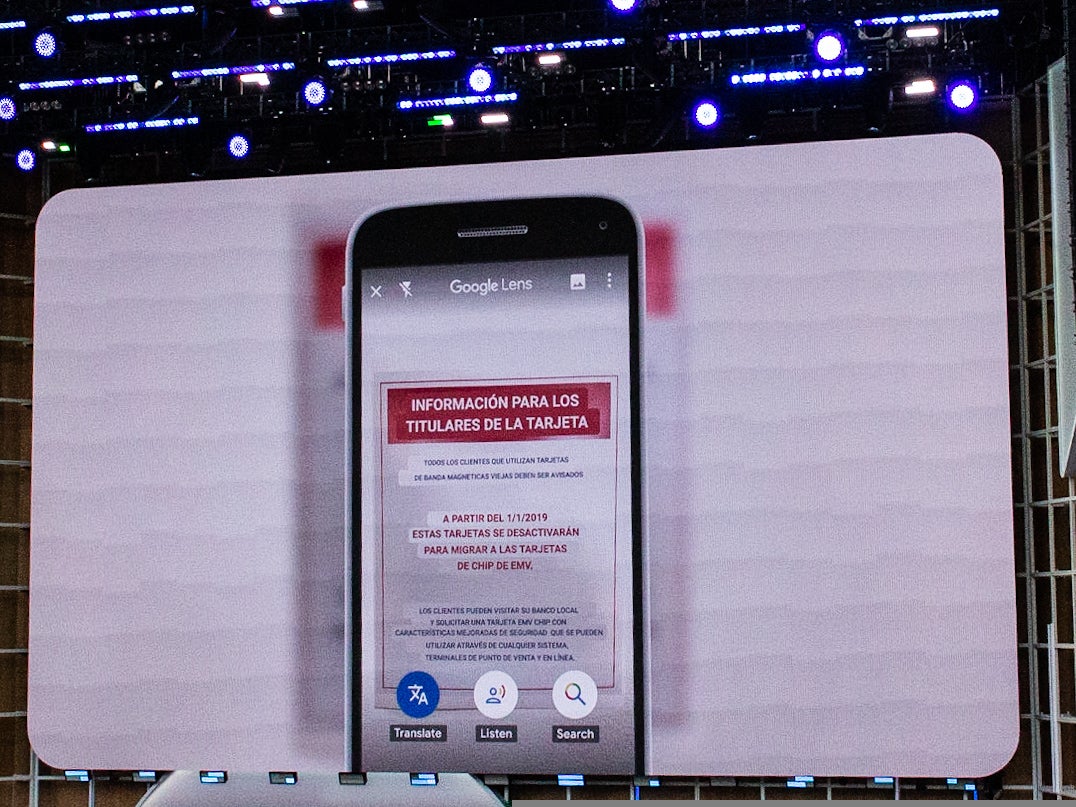 One of the most compelling features in Android 10 will make audio and video available for the hard of hearing. Live Captions will enable real-time transcriptions of what’s being said on screen, regardless of the app you’re using. Folks hoping to catch something a podcast host said can use the feature for clarification on a line, while folks who are hard of hearing can use Live Captions to transcribe personal videos. Best of all, an internet connection isn’t necessary to use this feature, as the transcription is processed all locally on the device rather than through the cloud.

Gestures you can use 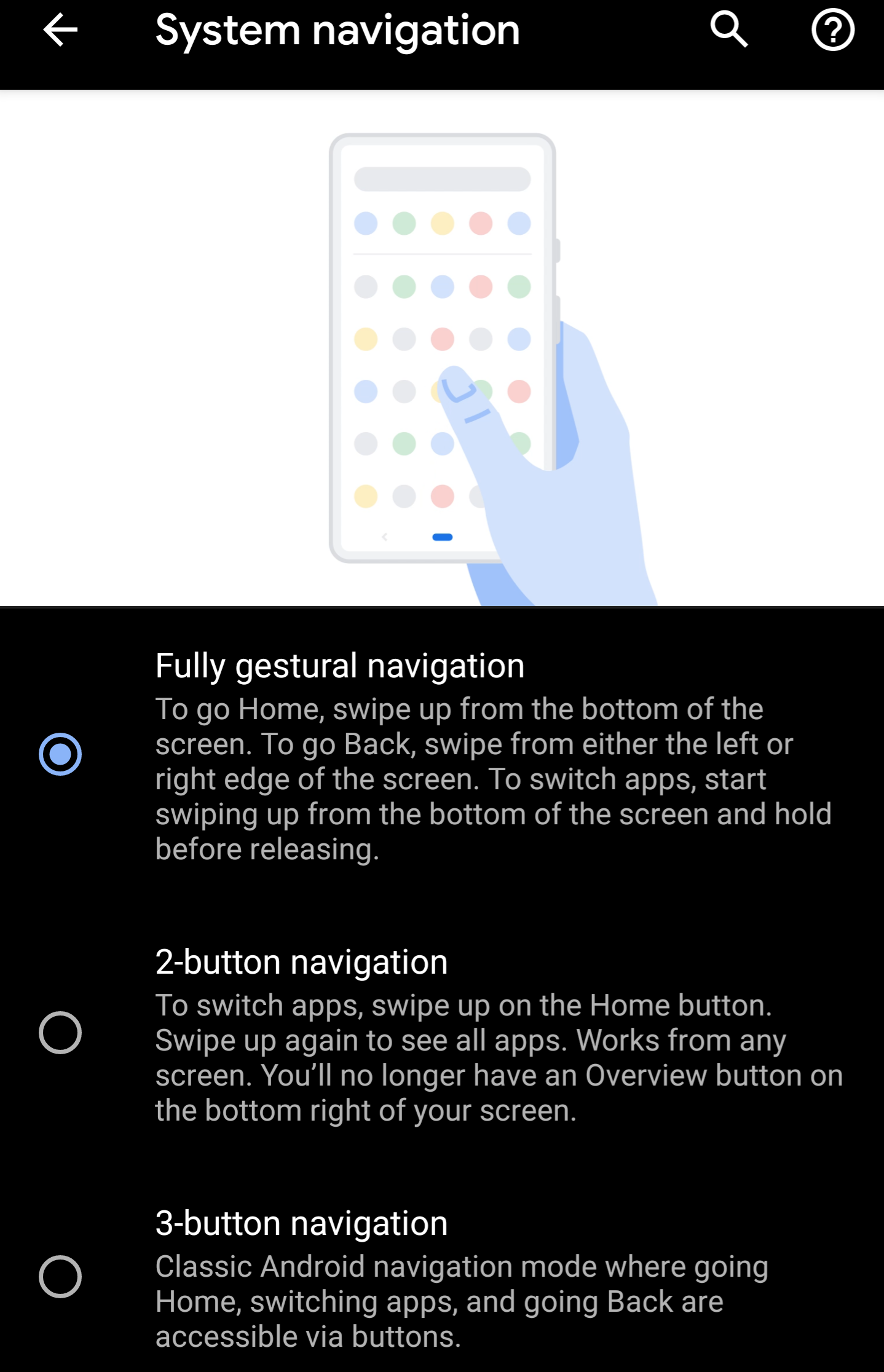 Gestures are fairly new to the world of Android, but soon they’ll be varied. (Screenshot: Florence Ion)

Gestures are controversial on the smartphone circuit because users don’t always appreciate them. But with phones getting bigger, and adopting edge-to-edge displays, the concept of using a gesture to navigate the operating system seems like the obvious evolution. Google first introduced gestures in Android Pie, and in Android 10 they’ll be more refined. Rather than the standard three- or two-button layout features in the navigation bar, you’ll use a swipe up gesture to go to the Home screen, then swipe up and drag across to switch into multitasking view. And rather than tap a button to go back a page, you can swipe across the screen to switch between apps, then swipe up from the Home screen to reveal the application drawer.

If you’ve ever looked at your phone in the dead of night and thought to yourself, “dang, this is way too bright” you’re likely to be very enticed by this next new feature. Dark Mode has long been a coveted feature on the Android operating system, and now it’s coming system-wide, with dark themes available for every one of Google’s core apps. Third-party apps will have to implement it manually.

Dark mode is also helpful for saving battery life, particularly for those devices sporting bright OLED displays. Activating it pretty easy: pull down the Quick Settings menu, then tap the setting to switch over the interface from white to black.