How To Avoid Getting Sick From A Public Pool

If your holiday plans involve a trip to the public pool, you might need to exercise caution. While uncommon, recent reported cases of the cryptosporidium parasite have set people on edge. Here’s what you need to know about this nasty bug, how to prevent it from spreading and how to avoid it.

Cryptosporidium — or “crypto” for short — is the leading cause of outbreaks of diarrhoea linked to water in the United States, according to U.S. health authorities. This parasite causes cryptosporidiosis, which is described as “a profuse, watery diarrhoea” that can last up to three weeks in otherwise healthy adults. It can be much worse for children, pregnant individuals and those with compromised immune systems.

Cryptosporidium is common around the world, including in Australia.

The good news is that it’s almost never fatal: There has only been one death reported since 2009, and in this case, the transmission occurred between two people in a hospital, not a pool. Still, you definitely do not want three weeks of profuse, watery diarrhoea, which can lead to conditions like dehydration and cause you to wind up in the hospital.

But aren’t poop-related illnesses transmitted through public pools old news at this point? Sort of, but given that there were 444 cryptosporidiosis outbreaks reported in 40 states and Puerto Rico between 2009 and 2017 — with the number of cases increasing by an average of 12.8 per cent annually. Either way, Crypto is something you’re going to want to avoid. 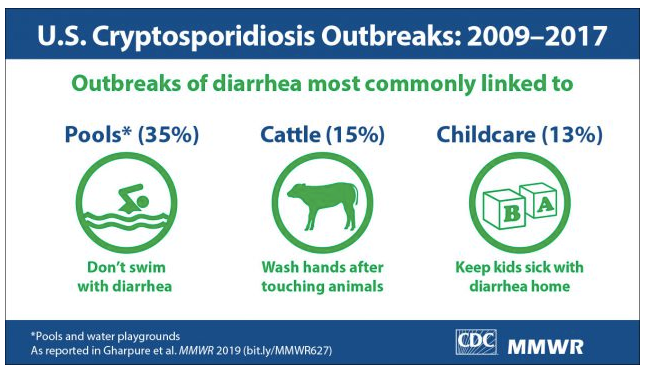 The parasite disproportionately affects children ages one through five for several reasons. First, kids in this age group may not be fully toilet trained. Second, they like to hop between various water attractions at public pools, like the kiddie pool, splash pads and perhaps the main pool as well, giving them the chance to contaminate (or be contaminated by) everything. Finally, younger children are more likely to ingest pool water and everything that comes in it, making them easy targets.

How to prevent the spread

There are a few things you can do to help stop the spread of crypto. First, if you have diarrhoea, stay out of the pool. That definitely applies to kids too, for reasons outlined above. Staying out of pools for at least two weeks after having diarrhoea is recommended.

Also, anyone coming in contact with livestock should wash their hands thoroughly after they’re done. This is a good idea in general, but definitely something you should do before hopping in a pool. And finally, if your kid is having diarrhoea, keep them out of child care.

Yes, public pools are chlorinated, but crypto has a high tolerance to chlorine and can survive in a properly chlorinated pool for up to seven days.

How to avoid crypto

So how can people stay safe this pool season? Unfortunately, there’s no secret trick to protect yourself from it other than avoiding public pools (or any pools with children) and definitely not swallowing pool water.

If you know there’s been a crypto outbreak, use hydrogen peroxide to clean surfaces rather than bleach because it inactivates cryptosporidium oocysts.