The launch of the Samsung Galaxy Note 10 is less than a week away and images of the device are beginning to pop up in the wild. What we’re seeing is even sleeker than we imagined with some the thinnest bezels ever to grace a smartphone. In short, it looks incredible. Here are the photos.

The following images were shared by TechTalkTV and later backed by the ever-reliable Ice Universe. As you can see, the rumours of a bezel-free display appear to have been genuine:

Note10+ only leaked photo is in good agreement with the rendered image. This year, there are fewer leaks of photos and videos, which shows that Samsung has kept a lot of secrecy. pic.twitter.com/wvKsn4GQvC

We haven’t seen an edge-to-edge screen like this since the Oppo Find X which required a pop-up mechanical camera (and a few millimetres of extra thickness) to achieve its look. Instead, the Galaxy Note 10 will use a floating notch design similar to the Galaxy S10. It’s slightly less obtrusive than a regular notch and we like the symmetry. (The S10’s keyhole lens was on the right-hand side.) 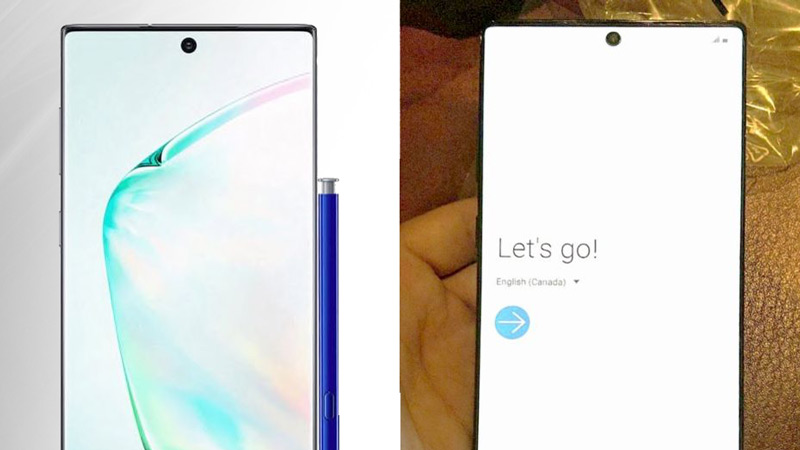 When compared to leaked photos of the Google Pixel 4 there’s no question over which phone is better looking – although you can also expect the Note 10 to cost more dollarydoos. According to leaked European pricing, the Note 10 will be significantly more expensive than its predecessor which started at $1499.

On the downside, Samsung is tipped to remove two popular features from the Galaxy Note 10 – namely the microSD slot and headphone jack. This could be a deal-breaker for some customers, although the proliferation of free and reliable online storage apps arguably makes capacity less of an issue than it once was.

The Note 10 is set to be officially unveiled in New York on August 8. If these images check out and the specs deliver, it’s going to be the phone to beat for the remainder of 2019. Join us for the official specs and pricing early on Thursday morning!

Check out the TechTalkTV video below for a closer look at the images.