How To Not Fail At An Ultramarathon

I came to the sport of running late in life. Though I was on my high school’s track team for a brief period, it wasn’t until after I had kids that I put serious effort into running regularly. And over the last ten years, I’ve made great strides in the sport: along with four close friends, I’ve completed countless half marathons and seven marathons.

As I’ve trained with my friends by my side, we’ve managed to deal with pretty much every running emergency or calamity. We’ve survived sudden hail storms under bridges. We’ve worked our way back from devastating plantar fasciitis injuries. And we’ve figured out where every bathroom is in a ten-mile radius.

So, when one of my friends suggested that we should tackle the challenge of an ultramarathon, we were feeling pretty cocky. As I signed up for the Rock the Ridge 50 Miler, I tried to calm my nerves.

We had 24 hours to walk or run 80km on a carriage trail in the middle of the Mohank Preserve in upstate New York. I mean, an ultra-marathon is just a marathon you run twice, right? How hard could that be? And anything with “ultra” in front of it is simply better. 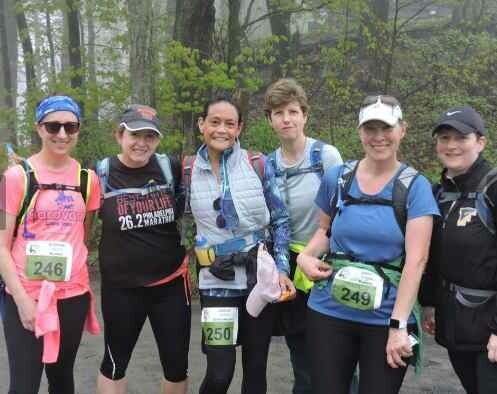 Ultra Running Magazine defines an ultramarathon, or ultrarunning, as any distance longer than a 42km (a marathon). Though technically, an ultramarathon could be 42km, “the shortest standard distance that is considered an ultra is the 50 kilometre distance… Other standard distances are the 80km, 161km, 100 km, and a series of events that last for specified time periods such as 6 hour, 12 hour, 24 hour, 48 hour, and 6 days.”

As a group, we collectively decided that we’d walk the race together as running 80km seemed silly. The race we signed up for had a 24 hour finishing limit and we figured we’d easily cross the line with time to spare. And rumour had it that the race volunteers served hot baked potatoes in the middle of the track. That alone was intriguing.

And though I spent six months training for the Mohank Preserve 50 miler this past May, fully expecting to complete the challenge and earn my medal (and bragging rights for infinity), my race didn’t go as planned.

In fact, I missed the mark by about 40km: due to a severe chafing and blistering situation on my right foot, I made the devastating decision to quit the race before the end. (My friends managed to finish but it took them 18 gruelling hours). And in what turned out to be the second biggest disappointment of the day: that hot baked potato turned out be a cold potato on a spork.

Here’s what I learned from my failed ultramarathon experience:

I think my downfall on the race course happened months before my actual race. When it comes to planning for an ultramarathon, inexperience is a blinder. Though I’ve had some tough marathon courses and unexpected issues arise in the middle of half marathon races, I’ve learned how to course correct.

It takes several marathons to figure out how to fuel your body and how to train yourself to handle the rigors of running 42km in a row. I relied on my marathon training to guide my ultra training and that was a mistake.

If I had it to do over: I’d have followed a strict training plan designed for ultramarathoning and would have talked more extensively to others who have completed several ultramarathons to learn tips and tricks to finishing.

Ultramarathon training includes building base running mileage, speedwork and long runs, often back to back. When training for an ultra, you are training your body to function when it’s exhausted. And many ultra training plans are designed to take over four or five months to prepare.

Though my friends and I spent several months training, we relied on long walks on the weekends and did little over the week to keep our training on track. And truth be told: after taking six hours to walk 32km on a Saturday, the prospect of getting up on Sunday to do it all over again was not my bag.

Listen to your gut and be honest with your training partners

My friends will tell you that I was the most reluctant of the group when it came to approaching this challenge. Something deep inside me told me this wasn’t a good idea for me and mentally, I wasn’t up to the challenge. I realised about halfway through the training that I simply didn’t want to walk 80km. And yet, I stuck with it because I didn’t want to be perceived as a quitter.

If I had it to do over: I’d have let myself off the hook. If your heart isn’t in it, just don’t do it. No one will think less of you for deciding to use a car to drive 80km rather than walk or run that distance.

Know the terrain and be prepared…

Inexperience led us to believe that simply walking for hours on end around the suburban roads of our town would prepare us for the gruelling 80km of a cinder trail in the woods. As we clocked the kilometres while walking up steep elevations in pouring rain on race day, we quickly realised we were in over our heads. Walking 16km to the local Starbucks is not the same as navigating complicated switchbacks and tree roots in fog conditions, trust me.

And there’s nothing more disheartening than being promised a “million dollar view” after walking 25km uphill on a muddy, wet trail only to find out that fog has completely obstructed the Catskill mountains: 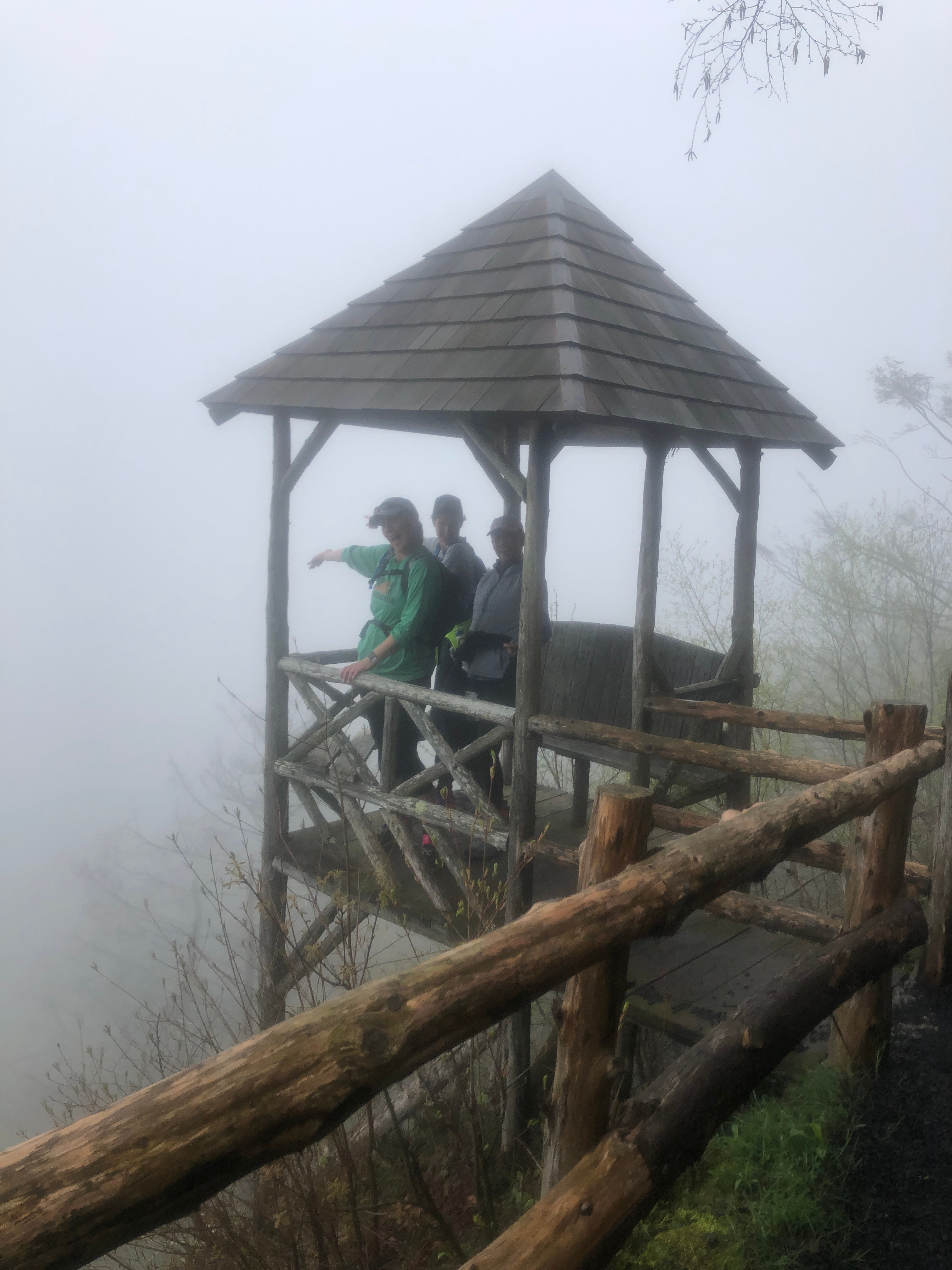 If I had it to do over: I’d have trained on the terrain I was expecting to cover. Period.

…Because inexperience can lead to deadly mistakes

Though I was not on the course with my friends for the second half of the race, their stories about the last 16km made me realise that ultramarathoning can be dangerous if you aren’t in top shape and prepared for any situation. My friends found themselves walking along narrow gravel paths at 10pm with only headlamps to guide their way. Race officials had long left the course and for hours, they were trekking through terrain that they could barely see.

Ultramarathoning is no joke. If you are thinking about conquering the distance, make sure you have a safety plan in place in the event that it takes you longer than expected to complete the course.

My friends and I had extra phone battery chargers, a host of first aid supplies, and we all programmed each other’s contacts into our phones in the event one of us was seriously injured. And we made sure to stick together, too. We also followed the race director’s rules and had the required gear on us at all times (Camelbacks with full bladders of water, headlamps for when it got dark, etc).

Thankfully, I was able to keep in touch with my friends via limited cell service and was at the ready to alert officials if they were in real trouble.

Not completing an ultramarathon really sucks

Because I’d trained myself to believe that I would be able to finish a 80km race, having to walk off the course was more challenging mentally than the actual race. Though it’s been a few months since the race, my ego is still smarting from the mistakes I made during the training process.

Thankfully, my friends loved me through my difficult mourning period after my failed ultra marathon attempt. They earned their medals fair and square and I could not be more proud of them.

Though I don’t have the picture of me smiling bleary eyed with my shiny ultramarathon medal, I tell myself that I didn’t quit an ultramarathon that day.

I finished my eighth marathon. And that’s pretty damned impressive, too.