How Telstra Briefly Brought Australia’s Cashless Network To Its Knees

Yesterday, numerous businesses and services around NSW and Queensland reported outages for their EFTPOS and ATM machines. What was initially thought to be an outage affecting one or two major banks turned out to be a system-wide issue. The problems also extended to other states and territories.

In short, Australia’s entire cashless network went down for several hours — and it looks like Telstra is to blame.

The outage occurred between 2:30pm to 5:30pm on 11 July, a Telstra spokesperson confirmed to Gizmodo Australia, and affected Telstra’s IP network services including EFTPOS, ATM services and some payment platforms. While the issue has since been resolved, Telstra has yet to reveal the cause of the issues.

Early investigations suggest “an unusually large volume of traffic across network links in NSW” is to blame.

Read more
” excerpt=”Telstra and Commonwealth Bank are both experiencing major issues across the country right now. A spate of other online services have also been affected, ranging from ANZ banking to XBox Live. Here are the details.”]

Despite reports indicating it affected NSW and parts of Queensland, Down Detector, a real-time peer-to-peer services status site, showed outages across the entire country. 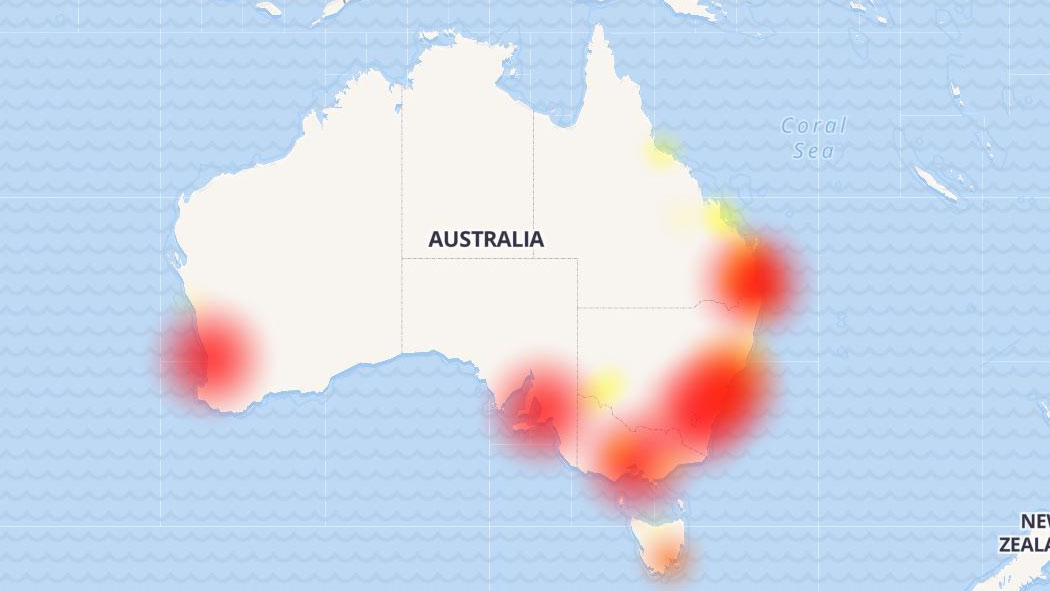 For those three hours, banks weren’t the only ones affected. Customers and businesses complained that cashless payments were unavailable and with most ATMs inaccessible, many were left stranded without access to their money.

While the three-hour debacle might seem small in the grand scheme of things, it brings up an important question: In an increasingly cashless world, what happens when the systems we rely so heavily on fail us?

With that in mind, let’s take a look at all the services and companies affected by the outage to illustrate just how far-reaching Telstra’s outage was.

Initial reports seemed to suggest only one or two of the major banks were being affected by the outage but it soon became apparent the outage affected most banks across Australia. Commonwealth Bank confirmed while EFTPOS and ATM services were down, internet banking remained unaffected.

Even Australia’s national postal service was affected by the outage. In a since-deleted tweet, AusPost reported they were “experiencing software issues in retail and urgently seeking a fix”, according the ABC. “EFT payments over $100 & Agency payments over $200, [email protected] withdrawals, deposits and balance enquiries are affected. Commbank withdrawals under $100 and deposits of any kind are unaffected.”

One of Australia’s largest supermarkets, Woolworths was not spared from the Telstra outage’s path of destrution. The Woolworths at Town Hall in Sydney’s CBD had to make use of a cardboard sign declaring they could only accept cash. https://twitter.com/dobes/status/1149216009313632256

At 6.03pm yesterday, a Woolworths spokesperson confirmed with Lifehacker that connection was back up and running. “Telstra has advised us the network connection is back up and running. We expect our systems to come back online and resume normal service through check-outs over the next hour. We apologise to customers for the inconvenience and delays in shopping this afternoon,” the spokesperson said to us in an email.

“Stores are continuing to trade and we thank customers for their patience.”

The Department of Veteran’s Affairs also issued a confirmation of their issues with the outage. https://twitter.com/DVAAus/status/1149193110003388416

Caltex faced problems when customers were left without a cashless method of payment. https://twitter.com/CaltexAustralia/status/1149236827217223681

McDonald’s’ customers reported having issues with payment during The Great Outage. The fast-food outlet didn’t confirm the news but we’ve reached out for comment.

Ambulance services were reported to have been affected as well, according to the ABC, but they stressed that emergency services continued on as usual.

Even the local libraries weren’t safe with Sydney’s Dundas and Constitution Libraries both facing technical difficulties during the outage.

The computer and phone problems experienced by our Dundas and Constitution branch libraries due to last night's Telstra outage have now been resolved. All services have been restored. Thank you for your patience.

Telstra has yet to offer an official explanation behind the reason for the outage. We’ve reached out for comment and will update as soon comment is received. In the meantime, Lifehacker recommends keeping some hard cash on you at all times in case of future network failures.