Everything You Need To Know About Firefox Preview On Android

Mozilla is taking another stab at mobile browsing with a new version of Firefox on Android. We’ve been playing around with the recently released early-access public build for this new Firefox, currently known as “Firefox Preview”, and now we’re here to fill you in on everything you need to know about it — how fast it is, how secure it is and the best new features we’ve found.

Why is Mozilla making a new Firefox Android app?

Firefox has a sizeable niche carved out of the desktop browser market, but it remains woefully underrepresented in the mobile space. Part of that is because of Chrome’s default near-ubiquity on Android, but even Mozilla admits that Firefox mobile could be much better.

Rather than attempt to drastically change the current mobile app’s course, Mozilla opted to start over with an all-new Firefox app. This new Firefox is built on the GeckoView open-source mobile browser software, which Mozilla claims makes Firefox Preview up to twice as fast as the previous Firefox Mobile version, and brings many of the same privacy-protecting features of the desktop version to mobile.

We’ve spent some quality time with the new Firefox Preview to see if Mozilla’s claims hold any water, and find out for ourselves just how much different this new Firefox actually is.

Firefox Preview’s core functionality is identical to any other mobile browser — you can open and juggle between multiple tabs, there’s a private mode, and you can perform quick searches in the URL bar from your preferred search engine (which can be set during setup and changed in the settings menu).

Firefox veterans can sign in and sync their bookmarks, browsing history and other settings (depending on your sync settings, of course), but the differences between Firefox Mobile and Firefox Preview quickly become apparent. 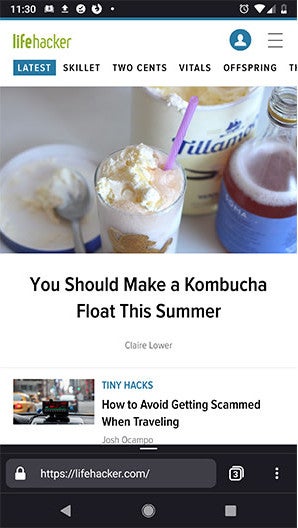 One thing everyone will notice is the sleeker interface. Firefox Preview has a much more trimmed-down and focused UI compared to Firefox Mobile. It’s much easier to jump immediately to a page, and the homepage is free of recommended articles and other clutter that make Firefox Mobile feel cramped.

The new, trim navigation bar has been moved to the bottom of the app screen, and stays stays mostly out of the way while you’re scrolling and reading a page. It’s more like using a browser in reader-mode, in that regard. 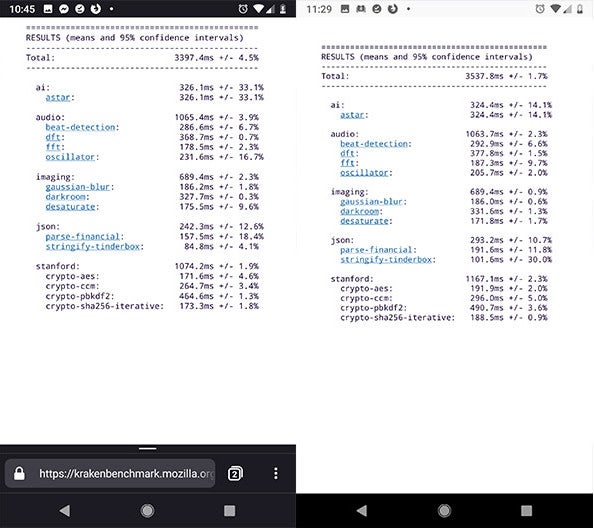 Firefox Preview is also a much faster browsing experience, in general. One of Mozilla’s big claims for Firefox Preview is that it’s two times as fast as the current version of Firefox on Android. Firefox Preview certainly feels a bit faster, and the the Mozilla Kraken benchmark tool confirms that it is, in fact, a speedier browser overall.

One of our favourite changes in Firefox Preview is the Collections feature. While the feature is similar to using sub-folders to organise bookmarks, Collections are different in that they not only let you save pages to separate collections, you can even save a page with in-progress processes — such as a webstore shopping cart or specific search results — to be completed later.

The browser will make suggestions for adding pages to your collections, and lets you share collections with others.

Users have the option to customise the privacy and anti-tracking settings when they first run the browser, and they can tweak them at any time from the settings menu, but we recommend sticking with Firefox Preview’s default settings for two reasons. 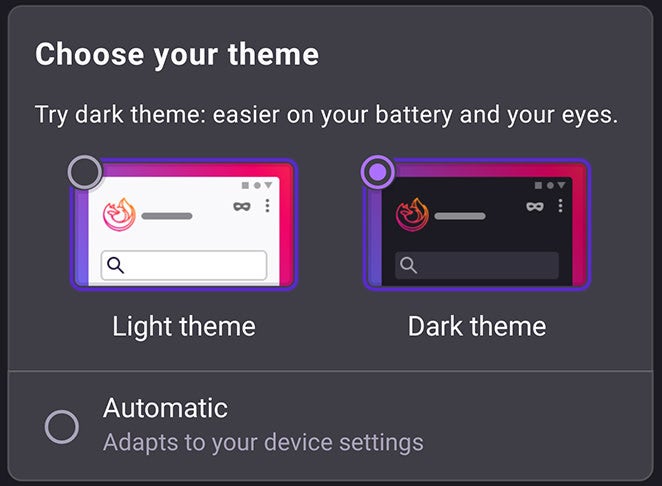 Another cool feature worth pointing out is dark mode. Plenty of apps have a dark mode, but it’s absent in the current Firefox Mobile browser, so it’s a welcome upgrade. Firefox Preview can be locked to either its light or dark mode, or set it to dynamically swap the theme based on your phone’s display settings.

Personally, I prefer to keep dark mode on all the time whenever possible, and Firefox Preview’s slightly purple tinge to its dark mode is a nice visual difference from the dark modes of other apps.

How to get Firefox Preview on Android

Anyone with a compatible Android device can download the latest version of Firefox Preview from one of the following locations:

While we’re impressed with Firefox Preview so far, the usual warnings about installing and using beta software apply: You’re likely to encounter bugs, and features, settings and optimisation may change in as new versions roll out. Our experience has been glitch-free, but there’s always a potential for bugs when beta testing apps.

If you happen to run into issues, report them to Mozilla on their Github bug bounty board, or email a description of the bug to [email protected].

Bug warnings aside, Mozilla also says it will continue to optimise and update Firefox Preview for the rest of the year, and that the final version scheduled to release in spring will have even more new features and upgrades compared to this early preview build.