10 Cold Weather Cocktails Guaranteed To Warm Up Your Winter 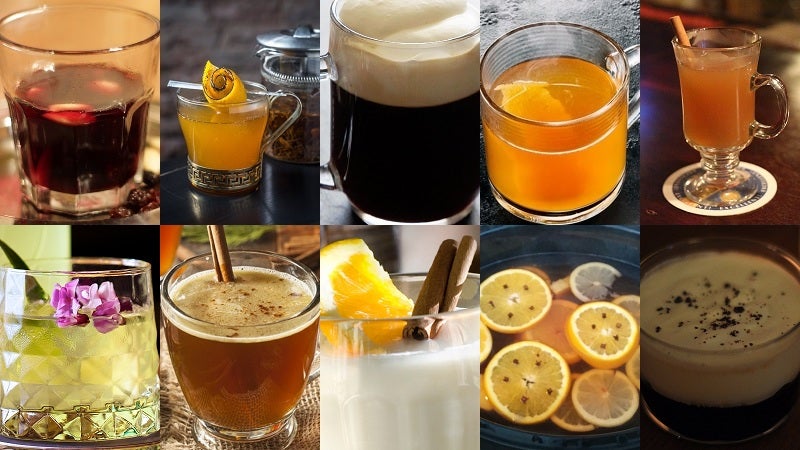 Winter is the perfect time to stay indoors, cosy up by the fire, and drink until all that nasty weather blows over. But vodka sodas and other chilled, spritzy cocktails will leave you shivering and dreaming of summer beach days. Instead, warm yourself up with these classic hot cocktails that go beyond spiked hot chocolate. 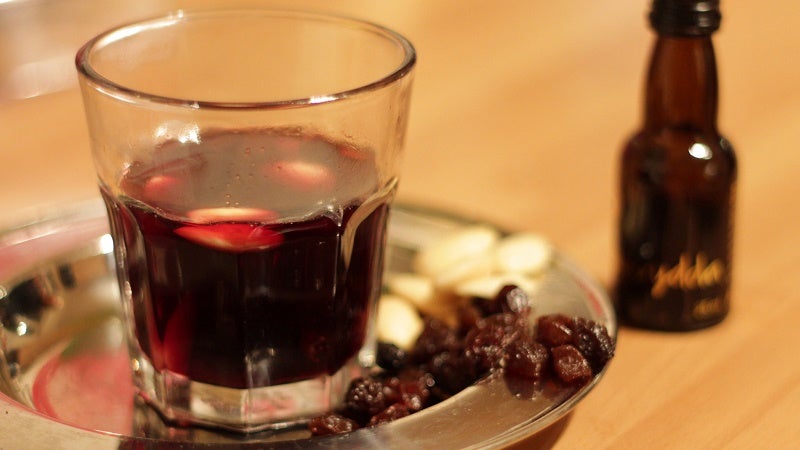 Glögg is essentially mulled wine — warm, sweet, citrusy red wine — with a Nordic twist. You might know it as a Smoking Bishop, Wassail, or Glühwein, but they're all very similar. This version from Gourmet Magazine serves six and is sure to win everyone over.

Zest the lemon and orange, then set aside the fruit. Heat the wine, sugar, zest, spices, and ginger in a saucepan over medium heat. Stir until sugar is dissolved, and let the mixture simmer gently for 10 minutes. Let it cool, then pour it through a sieve into a large punch bowl and add remaining wine and other alcohols. Heat new mixture in a saucepan until warm, then serve.

Optional: you can add raisins and almonds to each person's cup before serving for extra flavour. If you have guests coming over on short notice, you can make some of H. Joseph Ehrmann's Last-Minute Mulled Wine in about half the time.

Check out our recipe for our Last Stop Darjeeling cocktail on @TandCmag https://t.co/SUHWq4tXww pic.twitter.com/U6dVOZKvrB

If you're a black tea lover, the Last Stop Darjeeling cocktail from the Pearl & Ash in New York City is for you. The recipe calls for Darjeeling "2nd Flush" black tea, but you can get away with using any black tea you have on hand.

Start by making a half pot of black tea and let it steep. Then fill a mug about ¾ full with the tea before adding the rest of the ingredients. Garnish with lemon if you so choose. 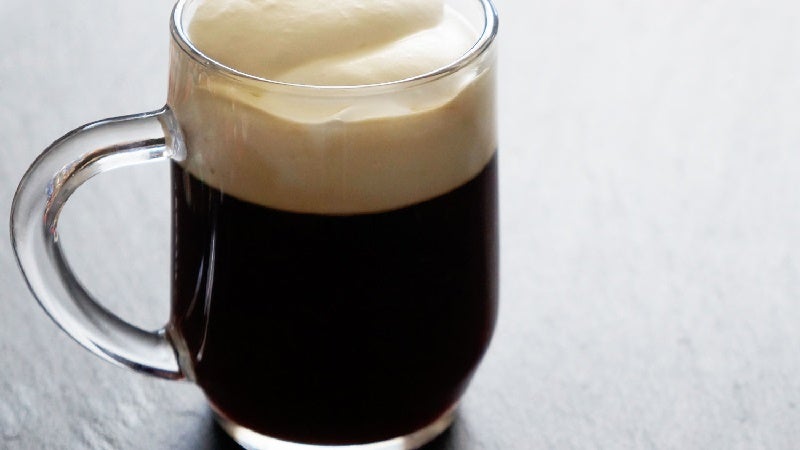 The Architects and Kings cocktail, from bartender Josh Relkin at Sable Kitchen & Bar in Chicago, is like an elevated Irish Coffee that's perfect for sipping after a nice meal. What makes this drink special is a few fancy ingredients, like demerara syrup. Before you can mix this cocktail up, you'll need to make the syrup yourself by simmering and stirring a cup of raw demerara sugar and a ½ cup of water in a saucepan until the sugar dissolves.

Mix everything but the coffee in a saucepan and stir over moderate heat until steaming. Pour the mixture into a warm glass or mug, add the coffee, and top with a dollop of whipped cream. This drink takes a little more effort than other coffee cocktails, but it's worth it. If you want a simpler take on spiked coffee, though, look no further than The Dead Rabbit's Irish Coffee. It will warm you up while it wakes you up. 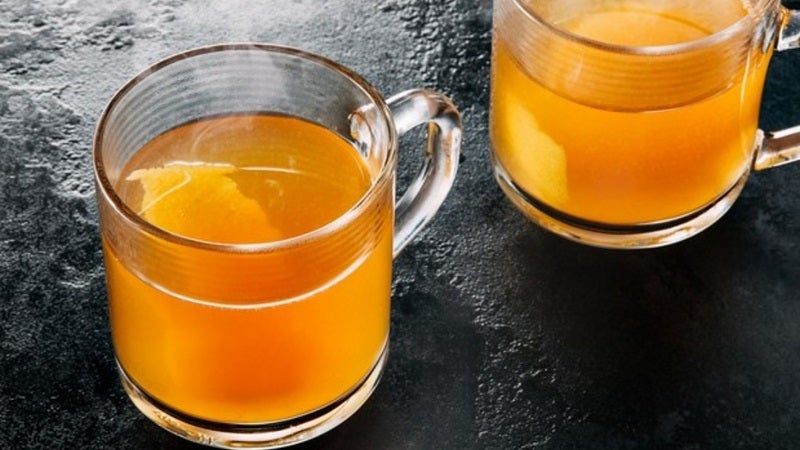 In its most basic form, a hot toddy is comprised of a spirit (like whiskey,) honey, and hot water — sometimes with a twist of lemon. This baseline makes it an easy cocktail to customise and build on. You can basically add anything you like to the cocktail and come up with something tasty. If you're looking for some inspiration, I recommend Matt Duckor's Maple Ginger Hot Toddy.

Boil some water, stick two ginger tea bags in a large mug, then pour the water over the tea. Steep for five minutes, remove the tea bags, and stir in the bourbon, lemon juice, and maple syrup. Garnish with a lemon peel if you're feeling fancy. For a more straight-forward toddy, I recommend the simple, but tasty Scotch hot toddy. 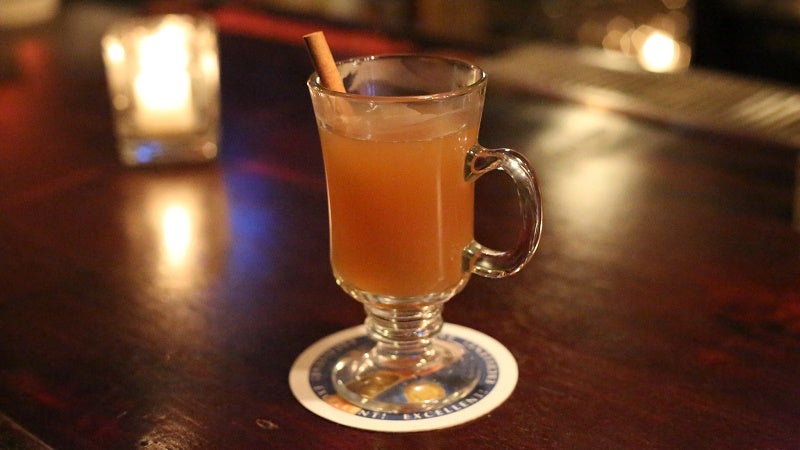 Like the toddy, there are a lot of ways to jazz up hot apple cider. But, gun to my head, there's nothing better than the classic rum-spiked version. This version from debmallonee at Allrecipes serves six and captures the essence of the simple hot spiked cider.

Bring water to a boil in a large saucepan, then remove it from and add throw in the orange spice tea bags. Cover and let steep for five minutes. Remove the tea bags, then stir in the sugar, apple cider, rum, and a couple cinnamon sticks. Heat it until warm and steaming, then serve. Top each mug off with a ½ teaspoon of butter and a cinnamon stick. 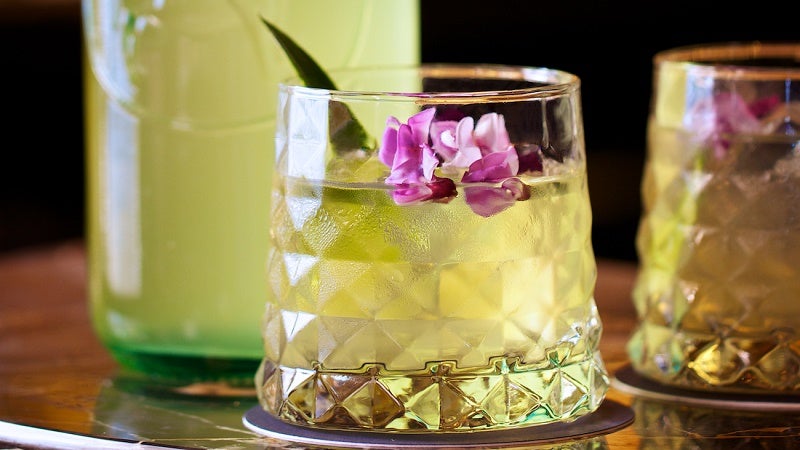 This cocktail recipe is another oldie but goodie from yesteryear. Over at the James Beard Foundation, cocktail historian David Wondrich shares Mary Rockett's original milk punch recipe that dates back to 1711. This will yield you 25 servings and is the oldest known version of the recipe.

Peel both lemons — avoiding the pith — then soak the peels in cognac for 48 hours in a sealed glass container. Add sugar and lemon juice to the cognac mixture, heat the milk until scalding, then mix it all together and stir until the milk curdles. Now add the grated nutmeg and let it sit for one hour. Once cooled, strain it through fine cheesecloth into a bottle, then refrigerate. When you're ready to serve it, pour it into a glass and add a little hot water (or ice if you'd like it chilled.) 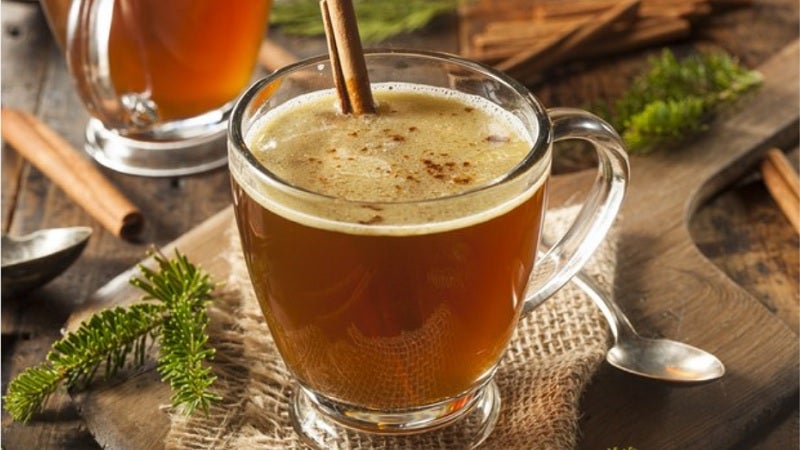 Image via Gourmet/Epicurious. Hot Buttered Rum is another winter classic that hits the spot from fall to spring time. This flavorful version featured in Gourmet Magazine sticks to the drink's roots in colonial America, where it was a holiday specialty.

This cocktail is super easy to make. Mix everything but the rum together in a large saucepan and bring it to a boil. Once it's boiling, reduce it to a simmer and whisk occasionally for about 10 minutes. Then remove it from heat, stir in the rum, and serve. 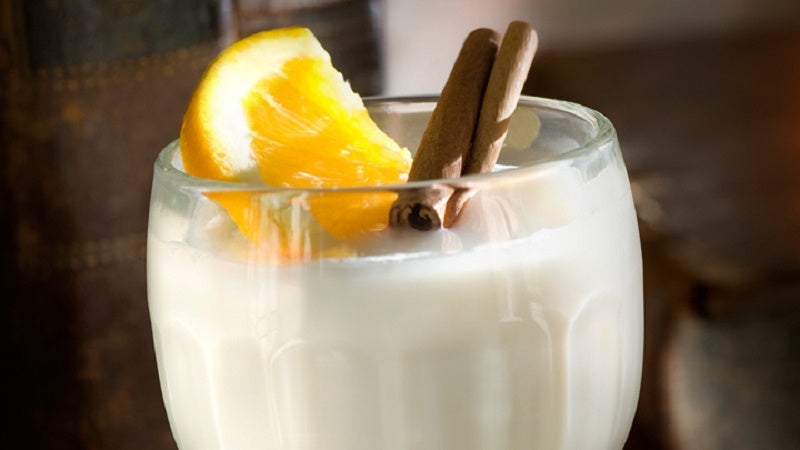 Image via Bénédictine. If you're searching for the perfect winter night cap, look no further than the Milk and Honey. It's a very simple mixture of warm milk and about 1 3/4 oz of Bénédictine, a super-sweet herbal liqueur concocted by monks in the late 1800s. Its flavour can be overpowering if you drink it on its own, but it makes for great cocktails.

Warm up the milk in a mug, add the Bénédictine, then garnish with an orange slice and a cinnamon stick. This cocktail can also be served cold if you're looking to cool yourself down a bit after spending too much time next to the fire. Just skip the milk warming step. 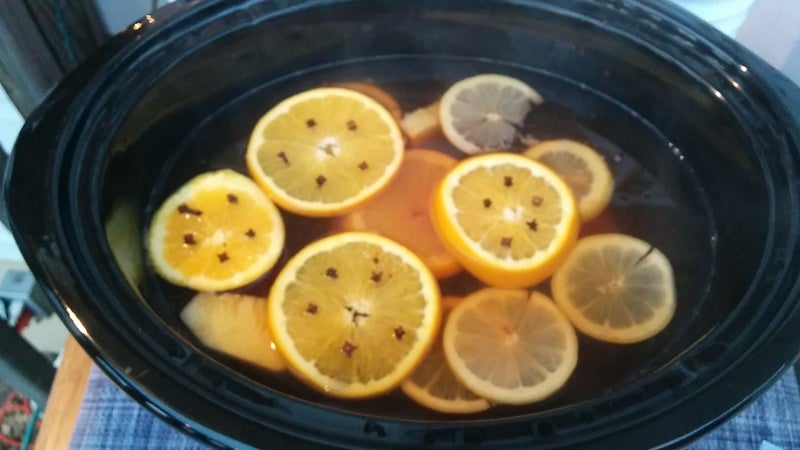 With this cocktail recipe, we shift from colonial America to Great Britain in the 18th and 19th century. Hot Gin Punch was a popular drink among royalty and beggars like, and is still enjoyed by many. This version of the drink, featured at traditional UK cooking site Oakden, is from the mid 1800s. 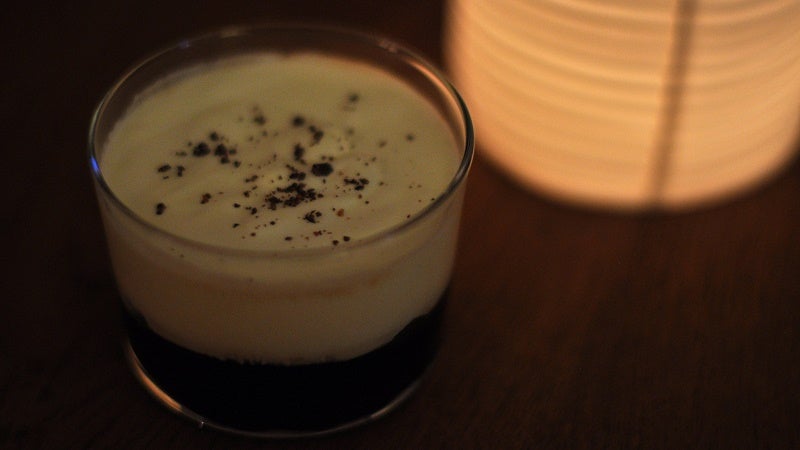 White Russian's are delightful cocktails in their traditional chilled form, but they're also perfectly suited for being served hot. On her blog Rachel Cooks, Rachel Gurk shares an adaptable, easy-to-mix version.

Combine all of the ingredients in a saucepan and heat over medium heat until warm, but don't bring it to a boil. Serve it in mugs and garnish with whipped cream. If you want to make your drink even more decadent, use whole cream instead of milk.

Whether you like gin, rum, whiskey, wine, or sweet liqueurs, one of these cocktails is sure to please you and any guests you have over. So, go pour yourself a glass and wait out any blizzards that come your way.