We Ate The ‘Beyond Burger’ – A Fake Meat That Actually Bleeds

The Beyond Burger is the latest innovation in plant based meat products – and it’s making some seriously big claims. Unlike the chewy and flavourless tofu burgers of the past, it promises to deliver a taste and texture that’s virtually indistinguishable from the real thing; the medium-rare patty even “bleeds” when you cut into it!

We recently taste-tested the Ribs & Burgers version to see if its lofty promises are just another tissue of vegan lies. Read on for our verdict.

The Beyond Burger is the non-bovine brainchild of US entrepreneur Ethan Brown. His company, Beyond Meat, has been serving up meat substitutes in America sine 2009, but the fruits of his labour have only recently made their way into Australia.

After a stint at Lord Of The Fries and a handful of supermarket chains, the product is now available at Ribs & Burgers outlets across NSW, Victoria, WA and Queensland. Here’s the official spiel from R&B’s website:

Have you given up red meat but still salivate at the smell of our succulent beef patties on the grill? Because we’ve got a solution for you that puts the promise in compromise.

We promise it’s just as tasty as the real deal. We promise no animals were harmed in the making of this delicious patty. And we promise that there are so many awesome benefits to our new Beyond Old School Burger and Beyond Original Burger that you’ll feel as good about yourself as if you’d just eaten a kale salad and switched all your lights to eco-bulbs.

The Beyond Burgers are made from a mixture of pea proteins, canola oil and various spices which are heated and processed into a familiar beef patty shape. A combination of steam and cold water help to create the “beefy” texture. (The ‘bleeding’ of the patty is achieved via an injection of beetroot juice.)

When it comes to nutrition, a half-pound Beyond Meat patty packs in around 20g of fat. However, it’s also big on protein and iron, providing 30% of your daily intake for both. This makes the Beyond Burger a pretty great choice when it comes to cheat meals. It’s also entirely free of GMOs, soy and gluten.

To be honest, it sounds way too good to be true: an all-vegan, 100% ethical meat substitute that doesn’t compromise on taste or protein? Yeah, right. Pull the other one.

Admittedly these things do look pretty damn tasty in the adverts:

But if Takeaway Truth has taught us anything, it’s that you can’t trust a book by its cover (or a burger by its cheddar.) Clearly, this is something that can only be judged using your own eyes and taste buds.

Ribs & Burgers is currently selling two versions of the Beyond Burger – the Beyond Old School Cheese (which comes with American cheese, onion, mustard, pickles, BBQ sauce and aioli) and the Beyond Original (topped with lettuce, tomato, onion, pickles, and Aunty Joan’s pink sauce.)

Determined to seek the truth, we headed down to the official launch event at Ribs & Burger’s flagship Sydney store and sunk our teeth into a Beyond Old School Cheese. For comparative purposes, we also ordered a regular Old School Cheese with beef, which is identical apart from the patty.

Here’s what the Beyond Burger patty looks like once you’ve take a bite out of it: 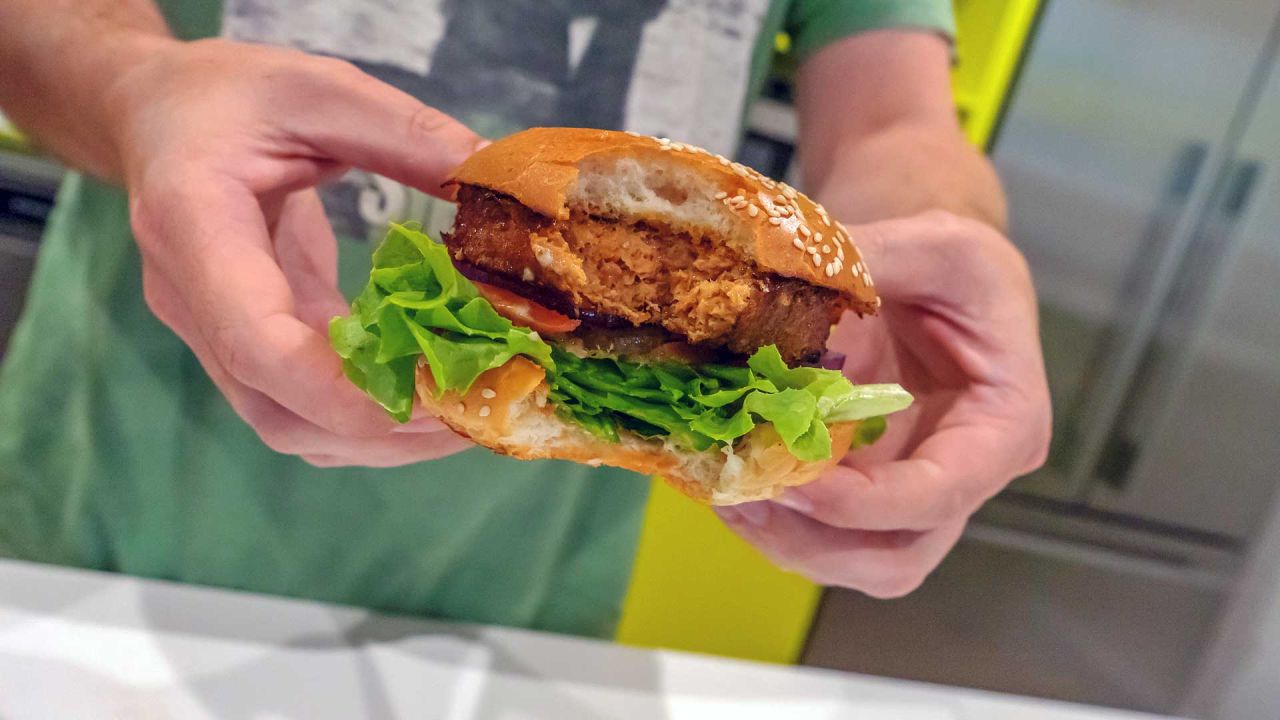 And here’s how it compares physically to a real meat burger. (The Beyond version is on the left.)

The reddish tinge to the meat is arguably overdone, but I wouldn’t have noticed anything was amiss without the beef burger right next to it. All in all, this is a very impressive looking meat substitute. As you can see in the photo below, the patties are flame grilled just like regular beef – check out those scorch marks! 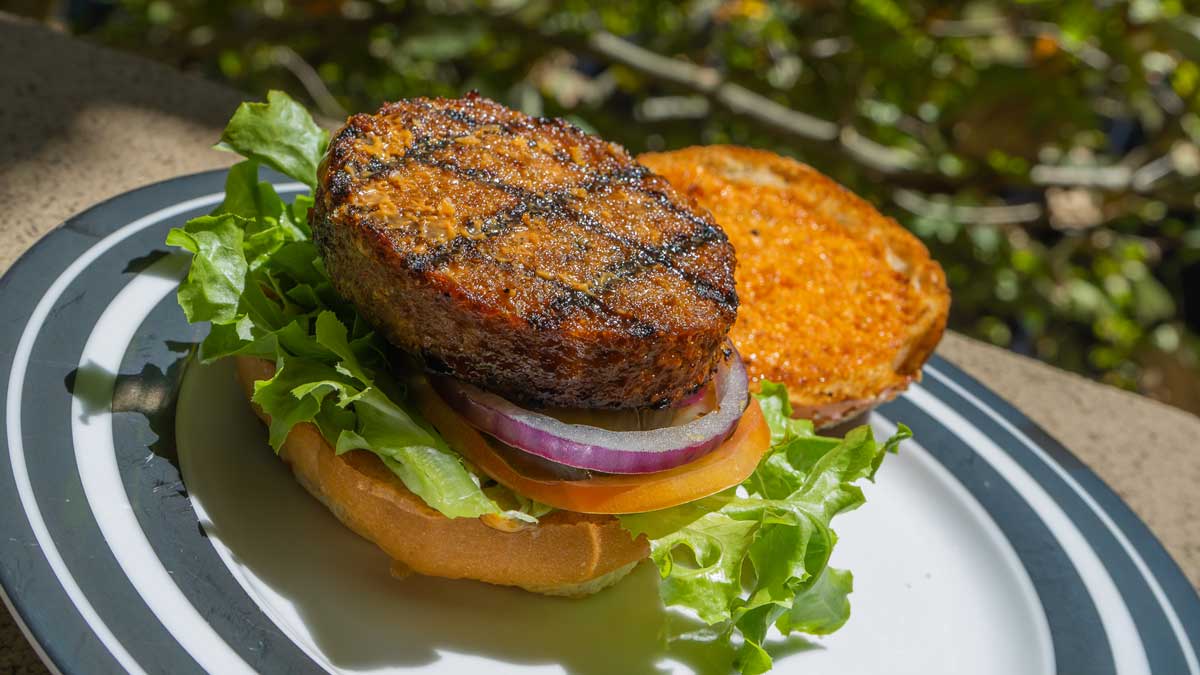 So the Beyond Burger is a clear winner in the looks department. You’d have to be a serious food snob to have a problem with its appearance. But what about the taste? When you get down to the (non) meat of the issue, that’s all that really matters.

I’m shocked to report that the Beyond Burger gets a definite pass – both as a tasty vegan burger and as a convincing meat substitute. The pronounced umami flavour is exactly what you want from a beef burger and there’s no dodgy aftertaste that often mars vegan meat.

The only area where the burger falters slightly is texture – it’s softer than meat and lacks those stringy, knobbly fibres that pull away when you bite into it. But it’s still an extremely passable imitation – if nobody told me otherwise, I would have assumed the patty was some kind of moisture-infused lean beef. So not perfect, but definitely better than tofu.

Would I order it again? Sure. Especially if I develop a moral conscious about the mistreatment of cattle. (My daughter just became a vegetarian, so this is probably on the cards.)

In conclusion, give the Ribs & Burgers range a burl and you won’t be disappointed. It will especially suit ex-carnivores who miss the taste of beef and anyone who wants to reduce their meat intake without forgoing the sweet, sweet taste of burgers. 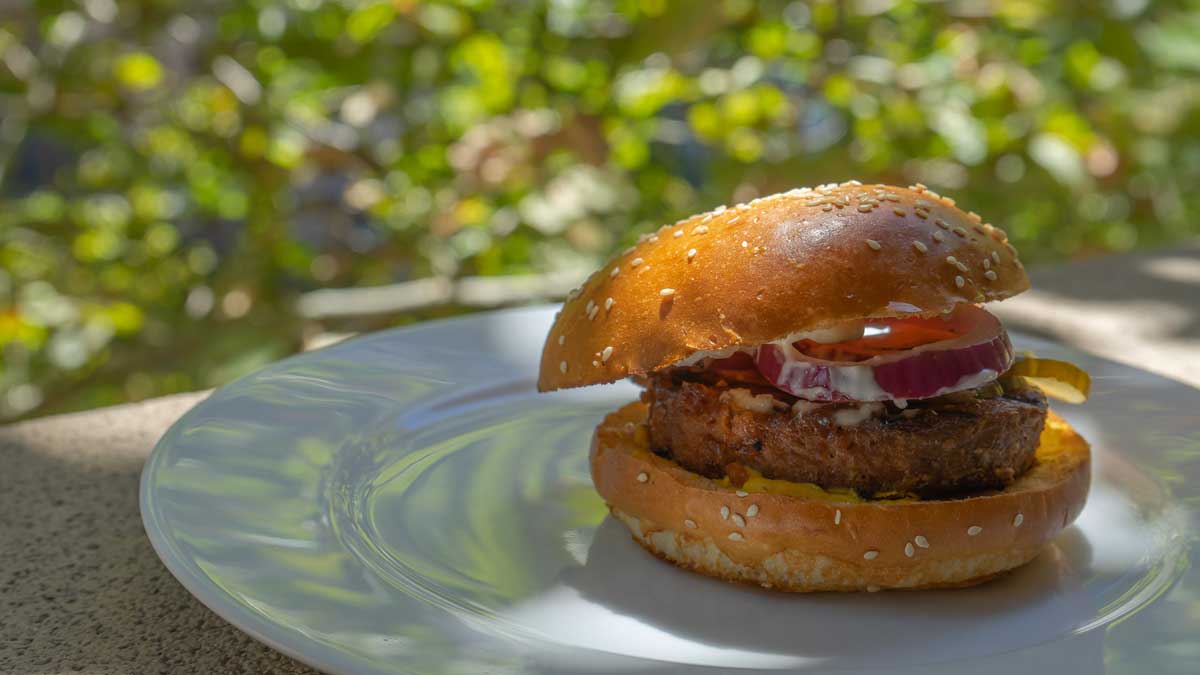 Want a second (and third) opinion? Ribs & Burgers sent a couple of Beyond burgers to the Lifehacker office for my colleagues to try. Here are their verdicts!

I was really impressed by this and would happily pay cash money for it.

While the texture can certainly be distinguished from real meat, its the closest a faux meat patty has ever come to the real thing, in my opinion. It was thick and hearty and had a really delicious flavour. When combined with the other ingredients of the burger it was a reminiscent of Burger Thing – probably due to the mayo (not sure if it was vegan?) and tomato sauce.

I also found that it was filling and satisfying, which is probably down to the use of pea protein. You’re not going to be left hungry after eating this thing.

Although its advertised that the patty would “bleed” thanks to a secret ingredient (which we guessed immediately) there was no evidence of this at all. But I don’t think this was a problem at all – the burger doesn’t need to fake-bleed in order to still be tasty.

All in all I was a fan and would definitely order this if my mates wanted to go out for burgers but I had already consumed an entire meat tornado that week. A+ alternative.

Honestly, I’d eat it again. Scratch that. I’d actively order it again, if given the choice.

We get a ton of burgers into the office, and burgers are fun to eat and all. But if I’m ordering a burger for myself, I’d generally get a chicken burger. Meat-based burgers tend to be a little too hit and miss, especially for the amount of calories you’re investing in.

So the prospect of a good-sized burger, with the nice mouth feel of a Whopper and way less calories? Sign me up. It was well balanced, didn’t have too much sauce and, if I hadn’t known beforehand that it was faux meat, I wouldn’t have minded.

You can still tell a little that it’s not the same as regular meat, but it’s close enough that you’re really not missing out. The burger and patty are really structurally sound, even after a couple of bites. We cut the burgers into four pieces – sharing is caring – and it was still easy to pick up and eat.

All in all, I’m pretty impressed. 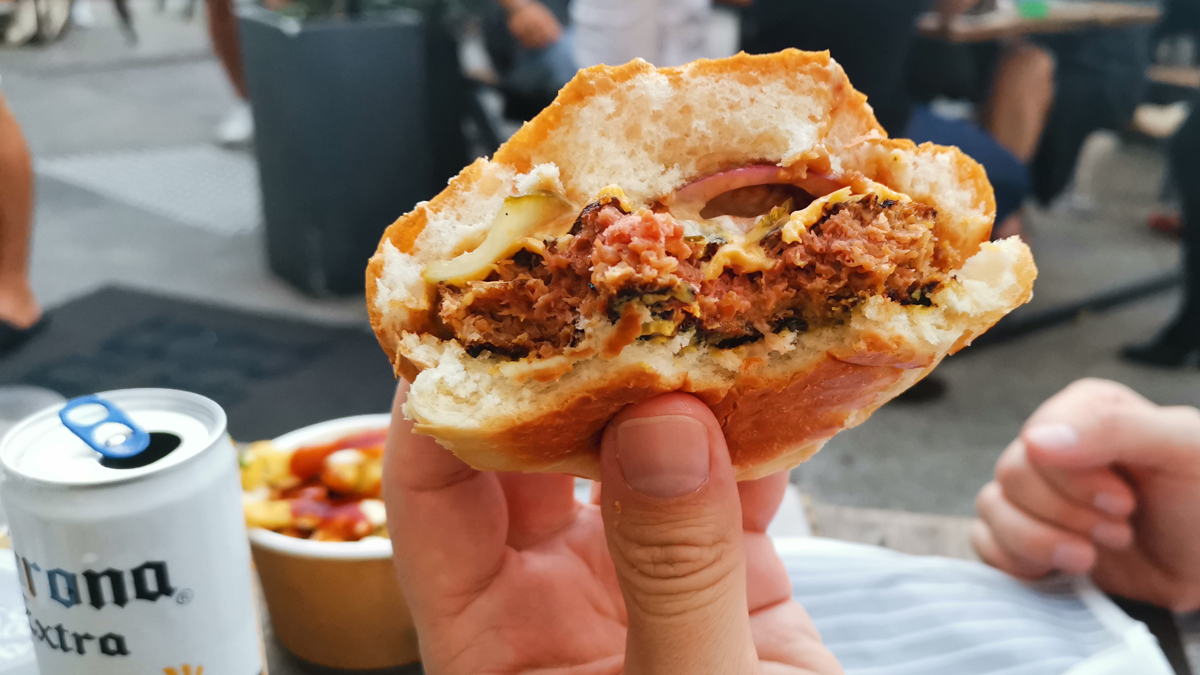 The Ribs & Burgers Beyond Old School Cheese and Beyond Original are available for a limited time. Both burgers sell for $12.90 nationwide. To find the closest R&B store near your location, click here!