The Ultimate Winter Side Dish Is Smothered Cabbage

Cabbage gets no respect, which is a shame — it could be the most versatile vegetable on earth. From the delicate leaves to the sweet, crunchy core, I love every part of every variety of cabbage and have made it my mission to make others feel the same.

One of the most powerful tools in my pro-cabbage propaganda arsenal is Marcella Hazan’s smothered cabbage, which turns everything you think you hate about cabbage on its head. I’ll concede that “smothered cabbage” is a tragically unsexy word pairing, but the dish itself is extraordinary. It’s one of those super-simple, low-and-slow recipes that transforms a handful of humble ingredients into something truly special.

Besides a cabbage — and salt and pepper — you need an onion, some garlic, a splash of vinegar, and a healthy dose of olive oil. That’s it. How much olive oil? At least half a cup. Don’t think about it too hard; it’s a Marcella recipe. Trust the process.

Speaking of the process, this one couldn’t be simpler. Marcella has you simmer the cabbage over a very low flame on the stove; I prefer a slow oven roast. While both techniques accomplish basically the same thing, I’m less likely to constantly poke and prod a heavy pot in a hot oven, and smothered cabbage is best when left to its own devices. (Another advantage to the oven roast method: you can throw a pot of this stuff in next to a pork loin or chicken and relax while your main and side all but make themselves.)

The end result is sweet and lush and velvety-rich, with none of the bitterness or bite you might expect from cabbage — basically, the kind of dish that can win a sceptic over. Give it a chance. 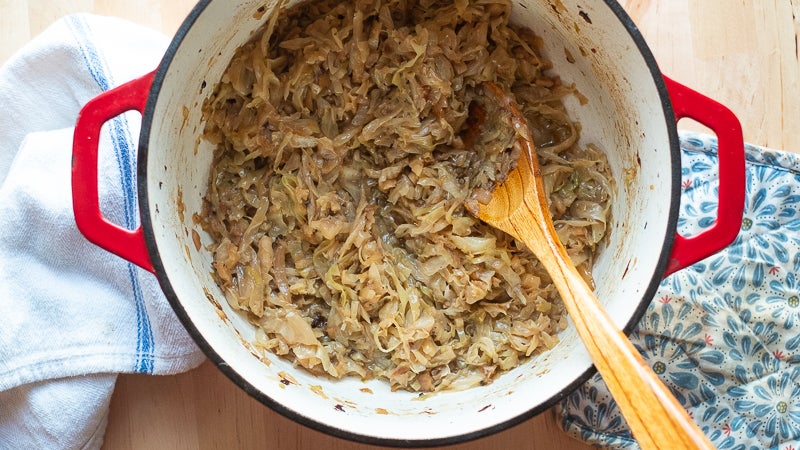 Fight the urge to “elevate” this — regular old green cabbage is all you need. Savoy has a gorgeously crisp, rubbly texture that is best served raw, while braised red cabbage should always be the sweet-and-sour, Bavarian type, at least in my opinion. Just buy a massive green cabbage, OK? They’re cheap as dirt and last for literal months in the fridge, even when you forget to wrap them in anything.

Preheat oven to 160c. Pour the olive oil into a large Dutch oven (or other large, heavy pot with a lid); add the onions and half a teaspoon of salt and cook over medium heat until soft and light golden brown, at least 20 minutes.

As the onions cook, slice the cabbage in half through the core and remove it by making wedge-shaped cuts in each half; if the exposed end of the core is dry and woody, trim it off and discard. Finely chop whatever’s left of the core and add to the pot to cook with the onions and oil. Shred the cabbage leaves as finely as you can, and set them aside. 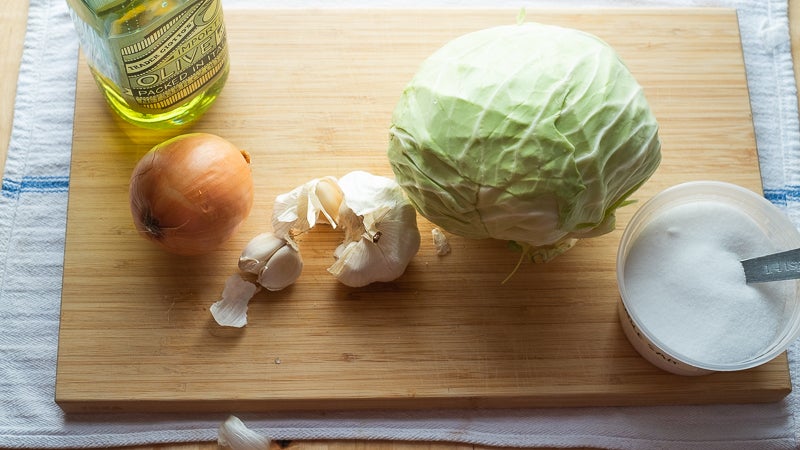 This is pretty much all you need. 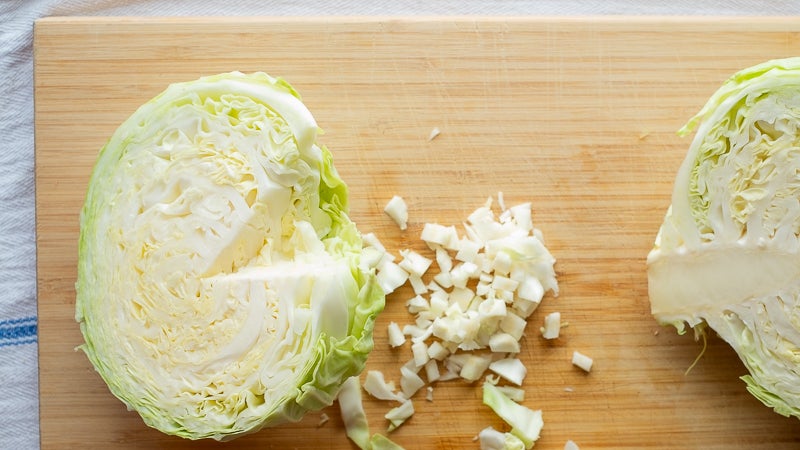 Core the cabbage, but don’t throw it away—together with the onions and garlic, it forms the flavorful base of the dish. 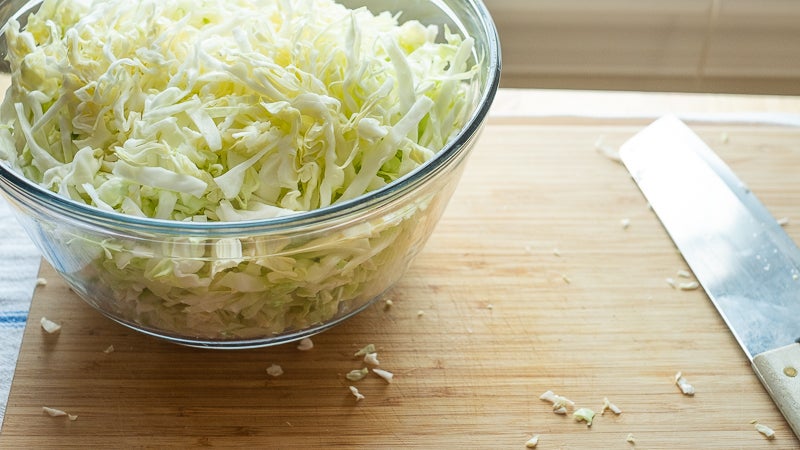 Shred the leaves finely and you’re good to go.

When the onions and cabbage core have gotten nice and brown, stir in the garlic and plenty of black pepper. Let them sizzle for about a minute, until the garlic barely starts to brown and the pepper is super fragrant, then add the shredded cabbage leaves. Stir and toss gently to coat every single shred of cabbage with oil. Add the vinegar and another big pinch of salt, stir again, and cover the pot.

Transfer the pot to the oven and roast for 1 to 1 1/2 hours (or more) stirring once or twice. The end product should be meltingly soft, sweet, and caramelised at the edges; keep cooking until it looks and tastes how you want. Before serving, add more salt, pepper, and vinegar to taste — you’ll be surprised at how much salt this dish can soak up, so don’t be shy with the seasoning. This is a thoroughly beige dish, so feel free to perk things up with a squeeze of lemon and a scattering of fresh herbs if you like. 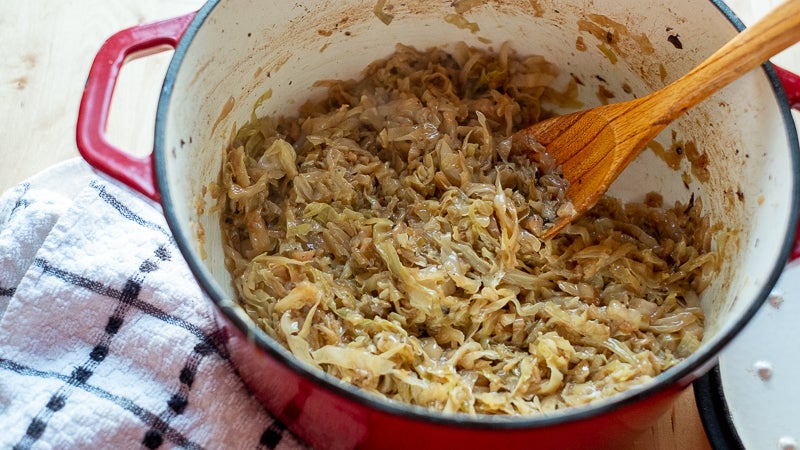 Here’s what it looks like after a solid hour and a half in the oven. (Photo: A.A. Newton)

There are about a gazillion ways to serve smothered cabbage, and none of them are wrong. I love it as-is, either in a bowl with sour cream and chopped dill or piled on crusty bread with butter and grainy mustard. It also goes with any main dish you can dream up: pork and cabbage are an iconic pairing, but don’t count out salmon or roast chicken; if you’re vegetarian or vegan, try it with root vegetable mash and mushroom gravy. Leftovers can be crisped in a hot skillet and topped with a fried egg, mixed with more veggies for a delicious pot pie filling, or used in an unexpectedly fabulous risotto.

However you serve it, it’s bound to change the way you think about cabbage.