How Ouija Boards Trick You Into Believing

There’s a simple explanation for how the Ouija board works: it’s not ghosts, but how you feel about them.

You remember the Ouija board, right? If you went to sleepovers as a kid, you might have played with one. You gathered around with a few friends, put your fingers on the pointer, and asked a question.

The pointer seemed to move of its own accord as it spelled out answers to your questions. Maybe you thought it was a fun game, or that you were actually speaking to the dead. Maybe you thought more sinister forces were making it move, or simply someone else sitting around the table.

It’s widely accepted by scientists that the Ouija board works through the ideomotor effect. The people whose hands hover over the little pointer that glides around the board are actually moving it to spell out the answers, even if they don’t mean to.

Ideomotor movements are unconscious gestures we make in response to strong ideas or emotions. Though there are different theories of the ideomotor effect, expectation and imagination play a key role — anticipating an action, whether that’s performing it or resisting it. The Ouija board, from its design to the myths surrounding it, practically hums with the desire for movement. We have this idea of the pointer swooping around the board. Maybe we think of it because we want it to happen, or because we’re afraid it will.

Those thoughts prime our hands unconsciously, almost irresistibly, to make that first twitch. Once the movement begins, the excitement and drama build up — Who’s moving it? I’m not; are you? — making us all the more susceptible to ideomotor movements and all the more unaware that we’re making them.

Since ideomotor movements are unconscious, they’re easily attributable to outside forces: spirits in the case of the Ouija board. We think the Ouija board is spelling things we couldn’t possibly write or know, but we’re simply so caught up in the moment that we don’t notice we’re doing it ourselves.

Sometimes the questions asked of the board are answerable by one of the participants, who unknowingly begins spelling out an answer and unintentionally encourages others to do the same. Other times, the question is broad and open-ended, providing room for an eager group to invent it together.

Despite the powerful nature of ideomotor movements, the Ouija board’s otherworldly workings have been debunked simply by blindfolding participants. When users can’t see the letters on the board, it spells out gibberish or misses the letters altogether:

If you’re a believer, this might be a bummer. The Ouija board is the kind of thing that some people want to believe is real, a hope that’s kept the object relevant in American culture since the 19th century. The board does unexpected, inexplicable things that its users believe they couldn’t do on their own.

That potential for surprise was part of the allure of Spiritualism, the religious movement from which the Ouija board grew.

Popular in Europe as a fad focused on contacting the dead, Spiritualism caught on in America in 1848 with the Fox sisters. They were young girls from upstate New York who claimed to communicate with a spirit in their house via a series of unexplained rappings.

Spiritualism blossomed from there, with as many mediums popping up as there were spirits willing to spill the secrets of the afterlife. 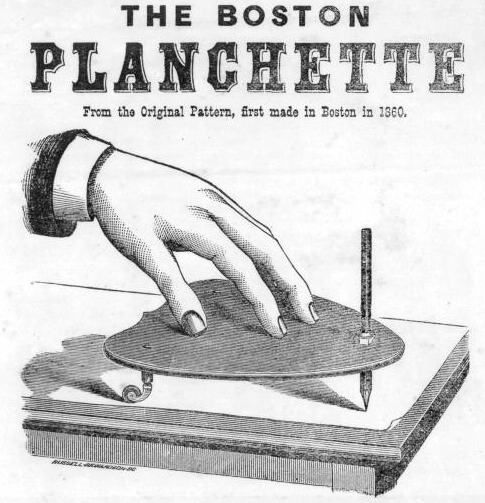 Originally known as a spirit board or talking board, the first Ouija boards were made with household objects in the mid 1800s. Users pushed a glass toward alphabet cards on a table, or even moved the table itself.

The planchette — the movable indicator we now associate with the board — appeared in the 1850s as the board’s popularity grew. Moving a planchette was easier than chasing a flying table around the room.

Some planchettes had a hole for a pencil to facilitate automatic writing. Feminist scholar Anne Braude notes that the planchette was “easy to use, required no experience or expertise, and could lead to the discovery or encouragement of mediumship in unsuspecting investigators.”

Spiritualism found power in communal, domestic spaces like the kitchen and the parlor, and in any of their inhabitants — mostly women — with an open mind and some simple tools.

Through the late 19th to mid 20th century, Spiritualism’s popularity waned as more and more mediums were proven to be frauds. But the mystery and possibility at the heart of the board remained alluring, and people outside Spiritualist circles wanted to cash in.

In 1890, Charles Kennard and several other investors started the Kennard Novelty Company to manufacture the board as a toy. Smithsonian reports that the name Ouija was not, as widely believed, a mix of the French and German words for “yes” (prominent on the board), but rather a name the board itself provided through the sister-in-law of one of the investors, Helen Peters.

The name is potentially the misspelling of the name of a women’s rights activist named Ouida, whose picture Peters was wearing in a locket at the time, a fact that would certainly fit with the board’s history.

According to Ouija historian Robert Murch, to prove the board worked in order to secure a patent, the chief patent officer demanded it spell out his name, which was supposedly unknown to the patent-seekers. The board did so, to the amazement of the officer, and the patent was granted. 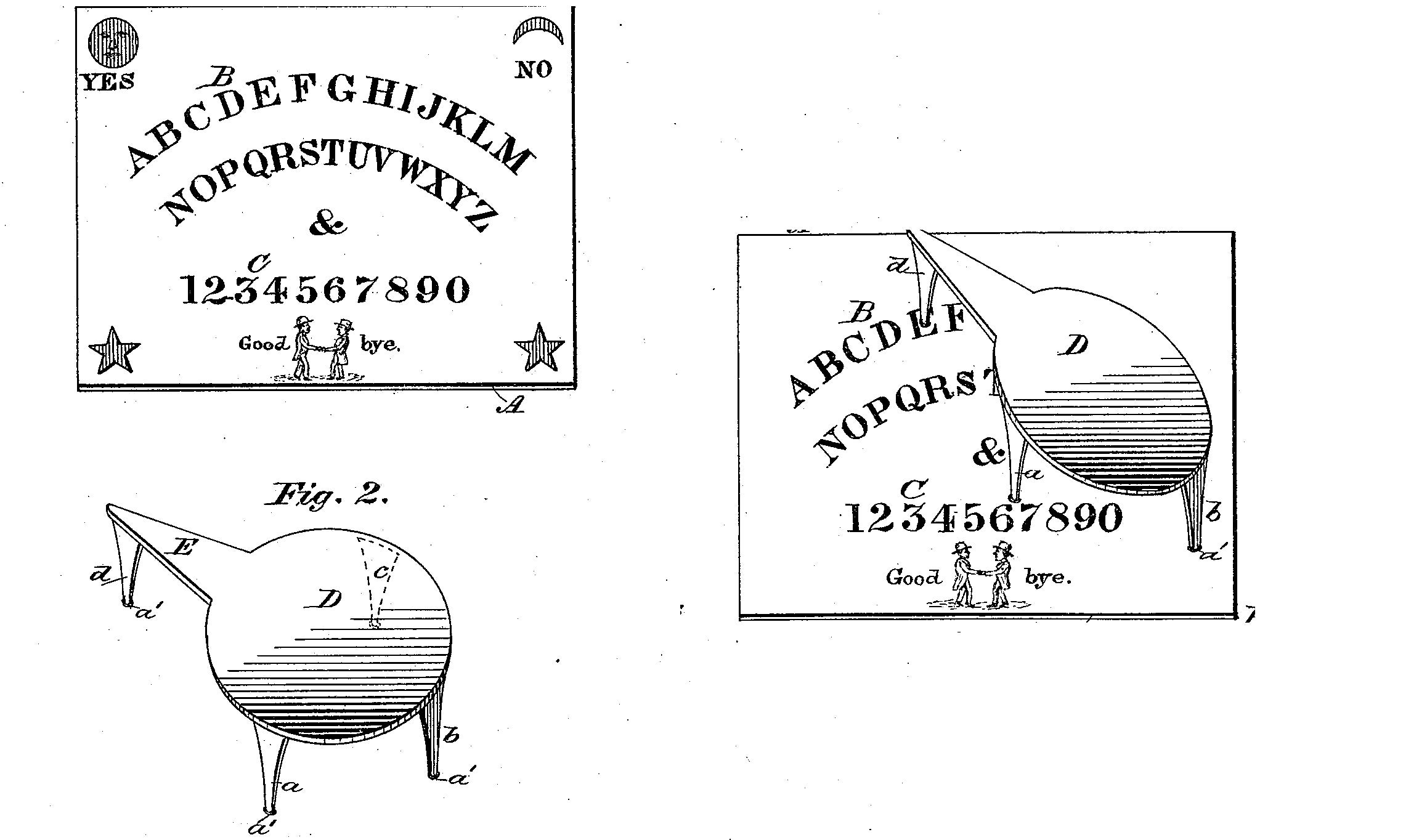 Despite the fact that ideomotor movement had been studied in relation to Spiritualist practices like the spirit board as early as 1852, mystery was one of the Ouija board’s biggest selling points. The only way to see if the Ouija board worked was to try it yourself. William Fuld, a Kennard employee, took over the Ouija patent in 1892.

While the original patent made no mention of how the Ouija board worked, Fuld’s 1892 patent claims it worked via “the involuntary muscular motion of the hands of the players, or through some other agency,” satisfying both science and the mystical.

Though the ensuing years, the Ouija board continued speaking to whatever was most on Americans’ minds, be that spiritual enlightenment or more mundane pleasures. Advertisements from the 1920s for Fuld’s Ouija boards present it as a joyful party game.

Romantic songs and Norman Rockwell paintings from this time emphasise its frivolity and light-heartedness.

The board saw renewed popularity during World War II, as Americans looked anywhere they could for comfort. In the late 40s and early 50s the board turned family-friendly and mainstream, with some of Fuld’s trade ads noting that it was “woven into the very fabric of American tradition.”

In the late 50s and early 60s, as American interest in the esoteric surged, the board appealed to people curious about psychic phenomena.

Parker Brothers acquired rights to the board from William Fuld’s descendants in 1966, and sales soared. While the board still had some trappings of fun and romance, a more sinister vibe crept in, aided by movies like 1973’s The Exorcist.

The possibility that dark forces might be at work contributed to the Ouija board’s allure, especially for young people looking to rebel against their parents’ conservative values.

It was especially popular among young women, the same demographic who first used it during its Spiritualist heyday.

Hasbro acquired Parker Brothers in 1991, and through the 90s interest in the board declined. More recent boards have been redesigned to glow in the dark or as tie-ins to movies or other popular media franchises. While Ouija boards are still commercially available, and several movies have been made about them recently, they’re nowhere near as popular as they used to be.

The ideomotor effect at the heart of the board works because of the scene we set when we open the box, the curiosity and desires we channel through it together. The Ouija board lets us write, say, or know things we don’t think we’re capable of.

Instead of being a disappointment that ruins our childhoods, the truth behind the Ouija board takes that power away from ghosts and spirits and puts it back in our hands.