Google’s latest update to Chrome came with big changes about how the browser treats autoplaying videos, but it’s now causing a lot of audio issues with various web apps and games.

For most people, Google’s changes are good fixes – videos can still play, but Chrome mutes (many of) them by default. As Chrome learns your habits, it lets videos autoplay with sound when you visit sites you actively engage with, an issue you can still address manually if you hate being surprised with noise.

However, Chrome’s new “muting” capabilities also break some web games and apps by silencing them entirely. Until developers tweak their apps (or Google tweaks Chrome’s auto-muting feature) you’re going to have to use a few workarounds to get your sound back.

To say that some game developers are pissed would be an understatement:

This really is an unprecedented moment for a tiny web browser team destroying a mountain of cultural work built on open standards. Hard to think of anything in history on an equivalent scale, with so little moral justification.

How To Restore Sounds For Some Web Games And Apps

Before we get to the workarounds, here’s a quick example of the Chrome problem in action. Pull up this game in the latest version of Chrome – it’s a fun one, trust me. In other browsers, the game sounds like this:

However, in Chrome, you’ll notice that Darkest Castle sounds like silence. And there’s no simple setting in Chrome you can use to fire up the game’s audio, not even by clicking the lock icon to the left of the website’s address in your browser. If you want to enjoy the game’s full experience, you’ll have to switch to another browser – or give one or two clever workarounds a try.

As Reddit user dirtynj notes, one way to trigger audio to play on your favourite (silenced) web games and apps is to adjust Chrome’s Autoplay policy in its Experimental Features. Pull up this address in your Chrome browser: chrome://flags/#autoplay-policy

Click on the drop-down menu for “Autoplay policy” and change it to “No user gesture is required”. Use the button in the lower-right corner to relaunch your browser and, magically, your should should reappear on most (if not all) web apps and games you frequent. 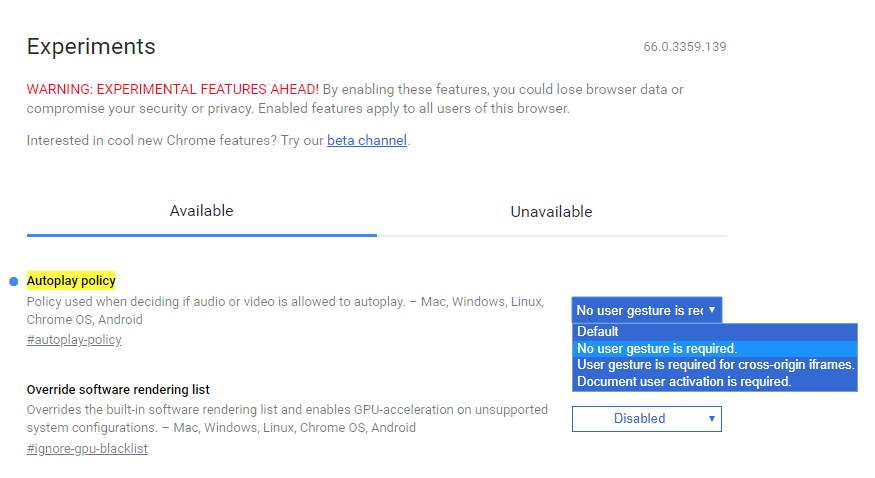 If the Experimental Features option goes away, or stops working, you can also try enabling audio using a simple extension that you’ll have to install manually.

Head over to the Github page for unmute. Once you’ve downloaded the extension’s contents (green button) and followed the directions to install it – and they’re pretty easy – you’ll see a new pizza icon appear next to Chrome’s omnibar. (Don’t ask.)

Now, when you visit a web game or apps that Chrome has muted, the pizza icon might have a number over it. If so, that’s good news for you. Click on the icon and the site’s sound will magically reappear. In some cases, you might even get a pop-up in the lower-right corner of your Chrome browser, which you can also click to enable the audio for a web app or game.

Option Three: Bug Your App Or Game’s Developers (Or Hosts)

In some cases, the site hosting your favourite web app or game might be able to launch a universal workaround that allows sounds to play in Chrome – no browser tweaks or extensions needed. Over at itch.io, for example, you can now enable a new “click to play” option that restores the audio for every game on the site. 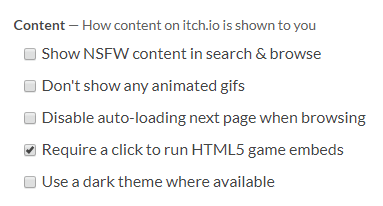 To toggle the feature, pull up your Account Settings by clicking on the arrow next to your user name in the upper-right corner of itch.io’s site. Once there, scroll down until you see the option to “Require a click to run HTML5 game embeds”. Enable that, save your settings, and you’ll have restored your audio capabilities site-wide.

Other developers, such as those working on Soundslice – a fun way to sync audio (or video) with a song’s actual sheet music – have also been working behind the scenes to deploy workarounds for Chrome’s auto-mute quirks. For some developers, however, going back to older apps or games to hack workarounds for their apps of games is a headache, at best:

Ah fuuck sake. I had just in the last year started to begin to trust that I could reliably use audio in the browser (after years of reticence). So much for that…looks like the chrome update broke all of the audio in my html5 games as well. https://t.co/gT6n9pz0VT