Takeaway Truth is an occasional Lifehacker feature where we compare marketing images to what you actually get served. Today: McDonald’s Grand Big Mac burger. (Plus taste test!)

To celebrate the 50th anniversary of the Big Mac in Australia, McDonald’s has launched the Grand Big Mac – a larger, premium version of its most iconic burger.

So what’s different? Unlike the Angus Big Mac from a few years ago, the Grand Big Mac doesn’t add any new ingredients. Instead, this is just a ‘roided up version of the original burger, boasting larger beef patties, bigger sesame seed buns and more lettuce, cheese, onions and Special Sauce. 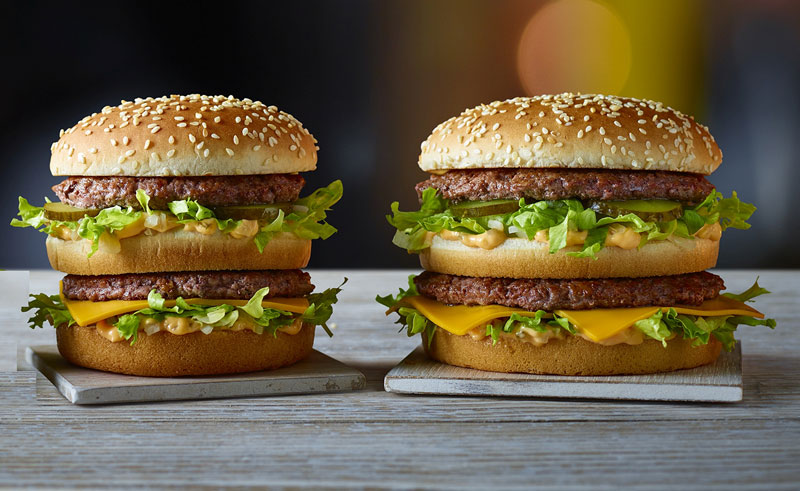 Here’s how the nutritional stats compare:

That’s quite a hefty markup on the kilojoule front. You could grab an original Big Mac meal with hot chips and a soft drink for roughly the same calorie damage as a standalone Grand burger. By itself, the Grand Big Mac costs around $7.50 although prices vary slightly depending on location.

When that Big Mac craving calls for something more, sink into two larger 100% pure beef patties with salt & pepper sandwiched between a sesame seed bun. All dressed with two times the special sauce and two slices of American cheese, crisp lettuce, onions and pickles to top it off. Rediscover the love for this iconic burger for a limited time.

The use of the word “rediscover” is rather telling – as we have noted in the past, Big Macs aren’t as popular as they used to be, with an increasing number of customers opting for McDonald’s premium burger range intead. While it’s not an endangered species just yet, the Big Mac’s heyday is definitely over.

Perhaps the Grand Big Mac will be able to reverse its fortunes? Well, that largely depends on how appetizing it looks.

Taste Test: These People Have Never Eaten A Big Mac

Meet Hayley, Tiffany and Quang -- three typical 20-something millennials. In addition to working for Allure Media, they share something else in common. none of them have ever eaten a Big Mac. No, really.

To find out how the Grand Big Mac marketing image compares to the real thing, we picked one up from a McDonald’s outlet in Blaxland, NSW. Here they are side-by-side:

As is typical of McDonald’s burgers, the Grand Big Mac has a slightly squashed appearance that you don’t see in the adverts. The cheese is a big mess too, presumably due to hasty assembly.

Yeah yeah, I realise this is disposable fast food designed for mindless consumption – but when you’re paying extra for a “premium” Macca’s burger that comes in a fancy box, I expect them to put a bit more effort in.

As for the taste, it’s exactly what you would expect a slightly bigger Big Mac to taste like. The patties have a larger footprint, but are still quite thin compared to a Quarter Pounder or Angus burger.

You could replicate the experience by eating one and-a-half Big Macs with extra sauce in a single sitting. Not terrible, but no surprises either.