Hello, and welcome back to Will It Casserole?, the column where I take delicious concepts and re-imagine them as delicious casserole creations. This week we are drawing inspiration from the classic New England Boiled Dinner, more commonly known as “corned beef and cabbage”, or “that thing I really should make sometime other than St Patrick’s Day”.

As a fan of salty meats, carbs and cabbage, corned beef and cabbage has always been my favourite part of March 17. (You would think it would be the drinking, but only amateurs need a “reason” to drink too much whiskey and get into a fight with some girl named Megan.)

Anyway, this festive, salty meal lent itself extremely well to casseroling. Beyond the meat and cruciferous leaves, I added mashed potatoes (because I already had some made and I felt they would make a nice base layer), an Irish whiskey cream sauce, and some butter-soaked soda bread, because every casserole needs a golden crumbly layer. To make your own comforting Guinness sponge, you will need:

Grease a 5×9-ish casserole dish with butter and mash your mashers down in the dish. Rough ’em up a bit so there are some peaks and valleys in there. 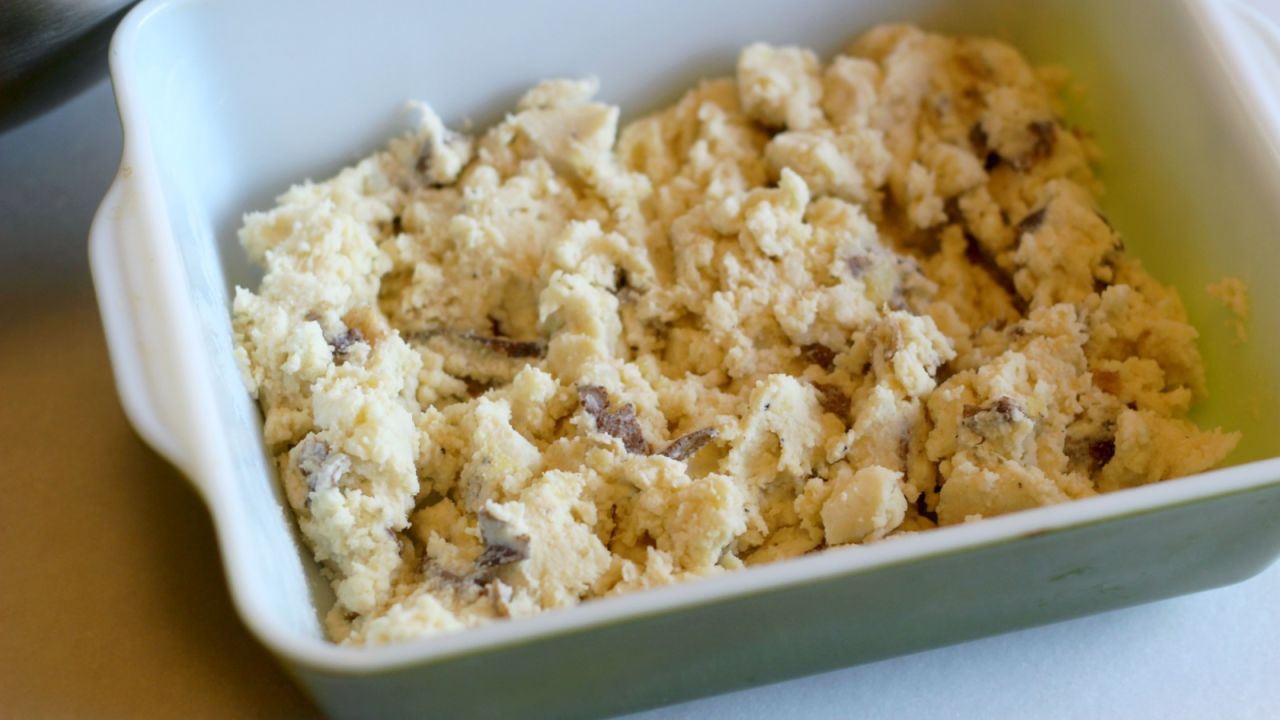 Melt the two tablespoons of butter in a big pan, add the cabbage, and season with salt and pepper. Cook the cabbage until it’s nice and soft, and has some sweet caramelised colour on it. Transfer it to a bowl, then add two more tablespoons of butter and the onions. Salt and pepper those guys, and cook them down until they too are nice and soft with some sweet caramelised colour. Add those to the bowl with the cabbage. 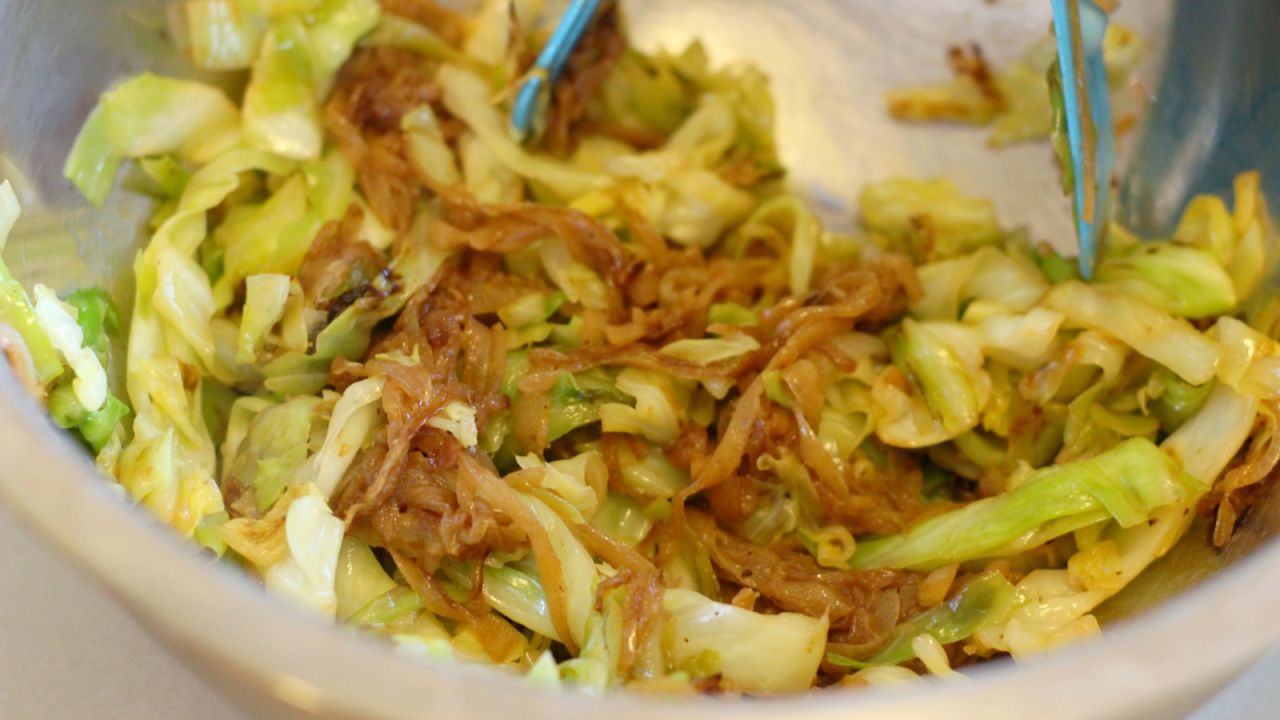 Deglaze the pan with your whiskey, and let it reduce until your kitchen smells aggressively of ethanol, and you have a shot’s worth of a nice, dark reduction. Add it to the vegetables, stir it all up with the sour cream and mustard, and season to taste with salt and pepper. Layer this creamy goodness over your mashed potatoes, then get corny and push half of your beef down into the cabbage-y, potato-y morass of beige deliciousness. 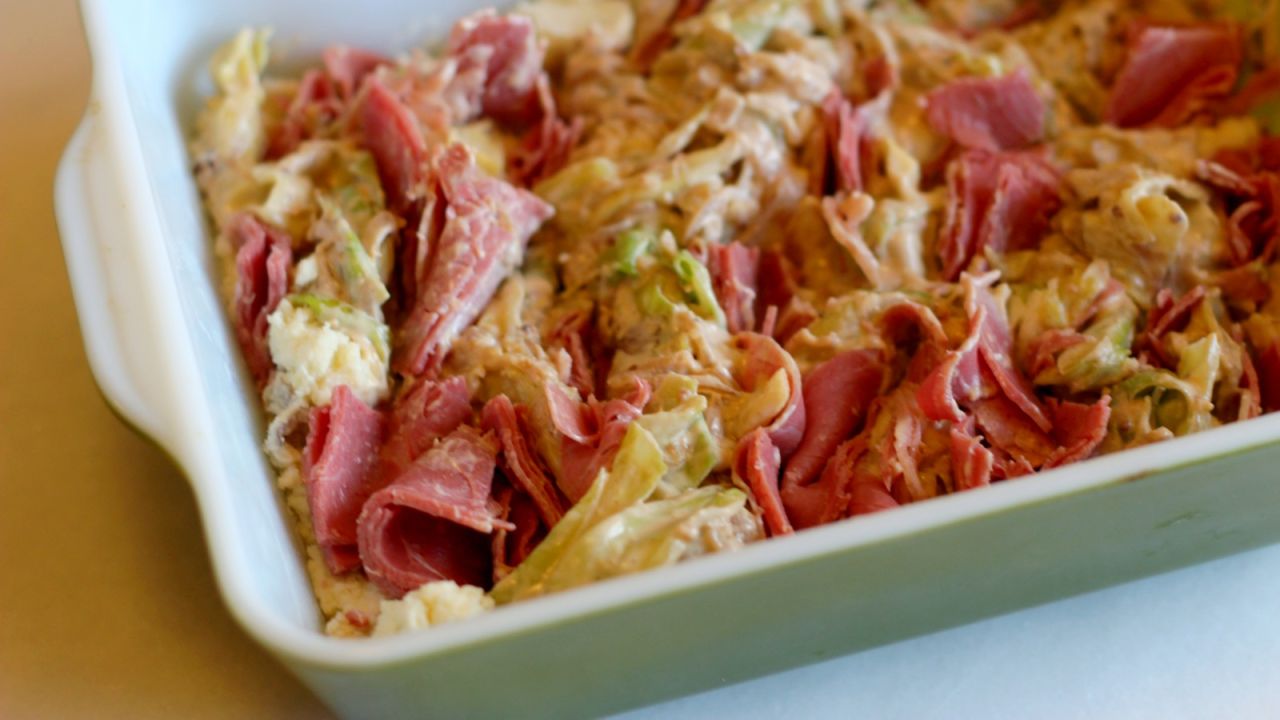 Sprinkle half of your soda bread on top, pile on the rest of your sour cream and cabbage mixture, and add the rest of the beef. Exclaim “THERE’S THE BEEF!” if it feels right. 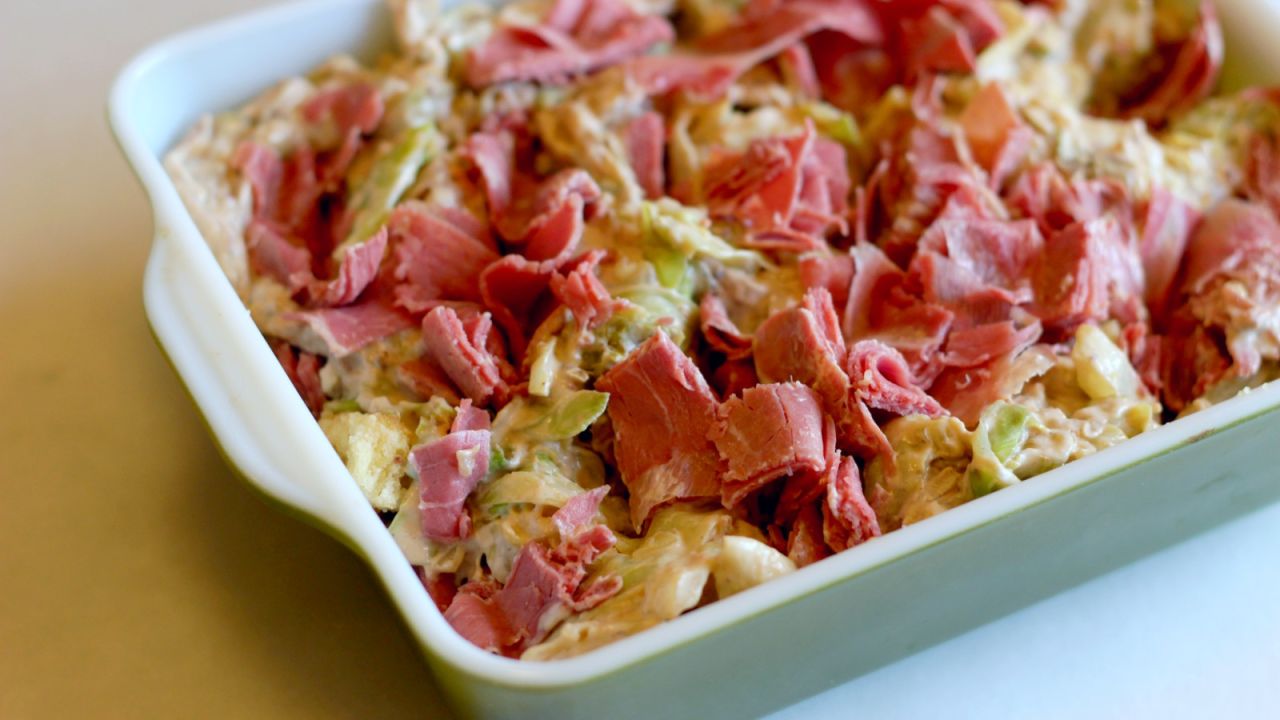 Shove the whole thing in a 190C oven, and cook until the edges begin to brown (20-30 minutes). While that’s going on, toss the rest of your bread in the rest of your (melted) butter. Sprinkle it on top of your ‘roled masterpiece, then pop it back in the oven until it’s golden brown. 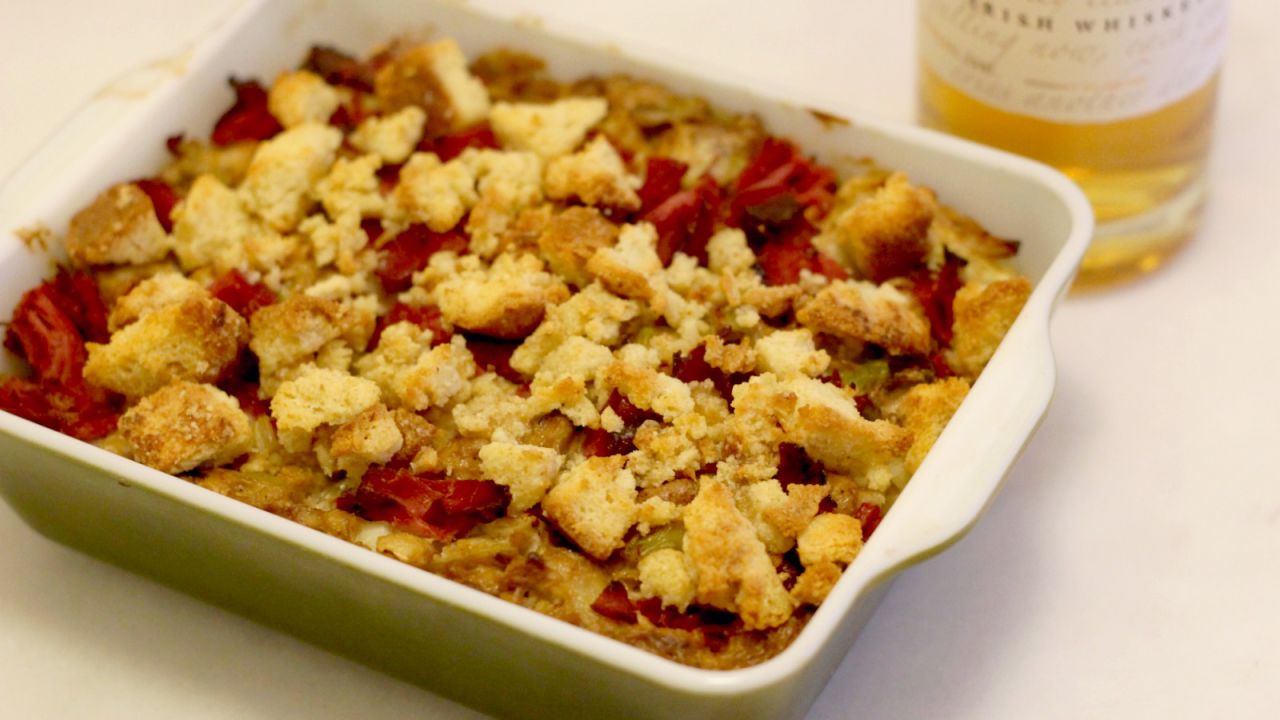 If I were you, I would assemble this before you hit the bottle, and pop it in the oven as soon as you get the post-libation munchies. If you don’t have mashed potatoes, you can use roasted or boiled new potatoes, hash browns, or even (gasp) tater tots, because all potatoes are good options. You can also mix it up with vegetables, and sauté some shredded carrots or parsnips if that’s your deal. 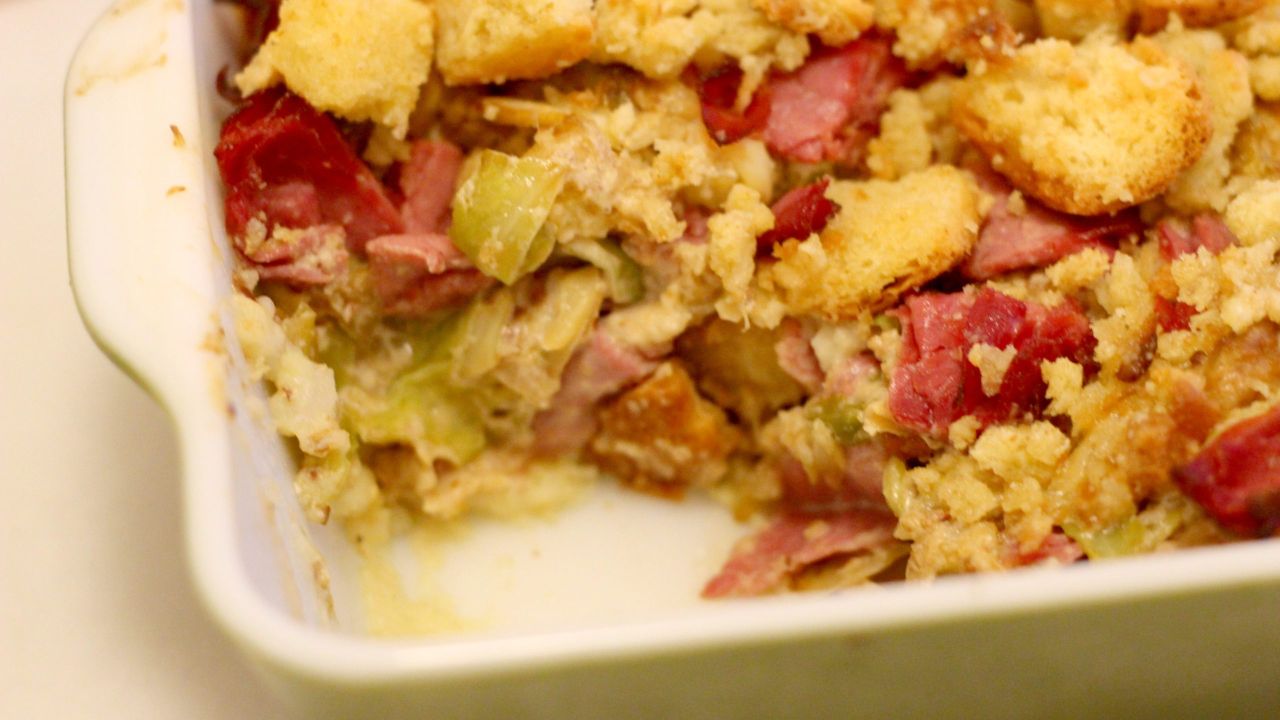 Beige food is the best food

Beige food is the best food

Spoon the casserole onto a plate or directly into your mouth, let the creamy carbs and salty meat do its thing in your drunken belly, and go to bed. The late-night St Patrick’s Day scene is a hot mess, and your night is better suited enjoying a hot dish.